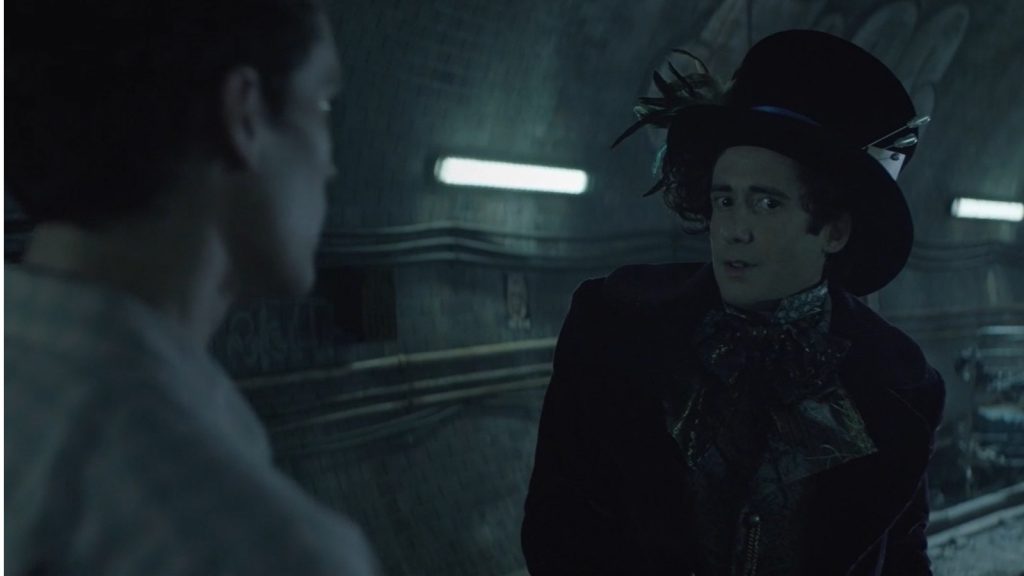 Well folks, it’s time for the start of a new season of Batwoman! In honor of a brand new season, we’re trying something different. Instead of last season’s incredibly thorough play by play approach, we’re going to do a more relaxed examination of the events of each episode, touching on their strengths and weaknesses. And while it’s very true Batwoman has moved to Wednesday nights, my schedule means HPP’s coverage will go live the Friday of each week. Now with that out of the way, let’s talk about Batwoman Season 3: Mad as a Hatter.

One thing I loved about the start of Season 3 is how it immediately addresses the consequences of last season’s finale. After Circe and Black Mask stole all those dangerous artifacts from the Batcave, most of them were cast adrift. And because this takes place in the DC universe, lost super weapons don’t go missing for long. While we first see Ryan as Batwoman dealing with recovering a cutting of Poison Ivy’s vines, the focus of this episode is a much more dangerous item. It’s none other than Jervis Tetch’s mind controlling hat! It’s found by some hooligans and quickly put for sale online.

Worse, the individual that buys the hat is a deranged Alice groupie. And he very quickly discovers the dangerous capabilities of his newly purchased hat. It’s used to bloody effect from the get go, and things don’t let up from there. Speaking of Alice, she’s very much become more deranged. Though it’s not immediately apparent, she’s lost a few screws since losing her lover, sister and father last season. And while she’s still dangerous and whip smart, let’s just say she’s not playing with a full deck anymore. But don’t make the mistake of feeling like she’s less of a threat. As she shows at the end of the episode, she’s more dangerous than ever.

I Only Become an Official MD Once 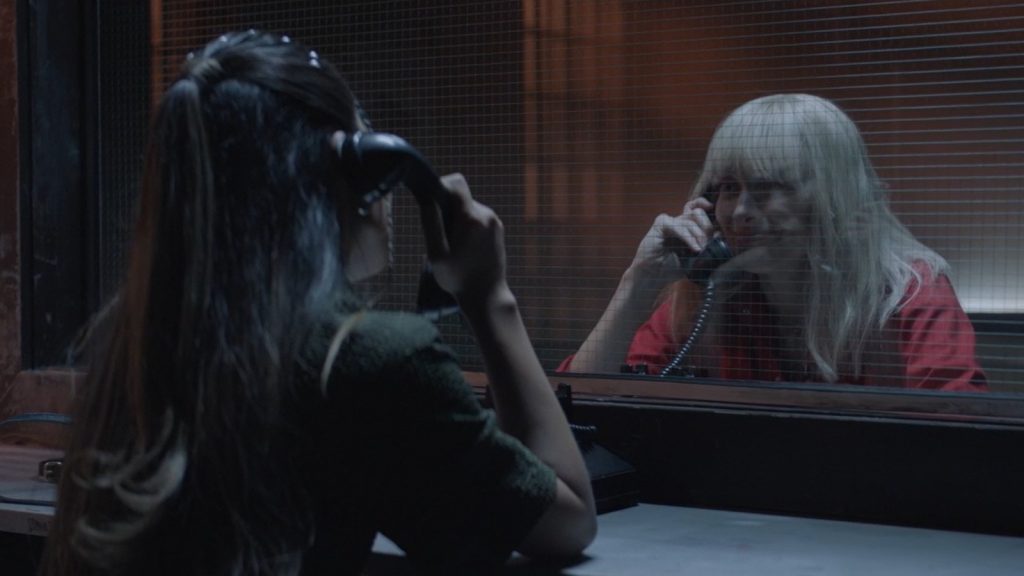 Before that, Alice taunts Ryan with her supposed knowledge about Ryan’s birth mother. Ryan believed she died in childbirth, but Alice is convinced that’s a lie. This causes a lot of heartache and anger for Ryan, but luckily Sophie agrees to investigate the thread. And she actually comes up with some distressing news. At least she does after she’s done making out with every woman on the planet. Looks like she’s not handling Kate’s transformation into Circe as well as we might have hoped. 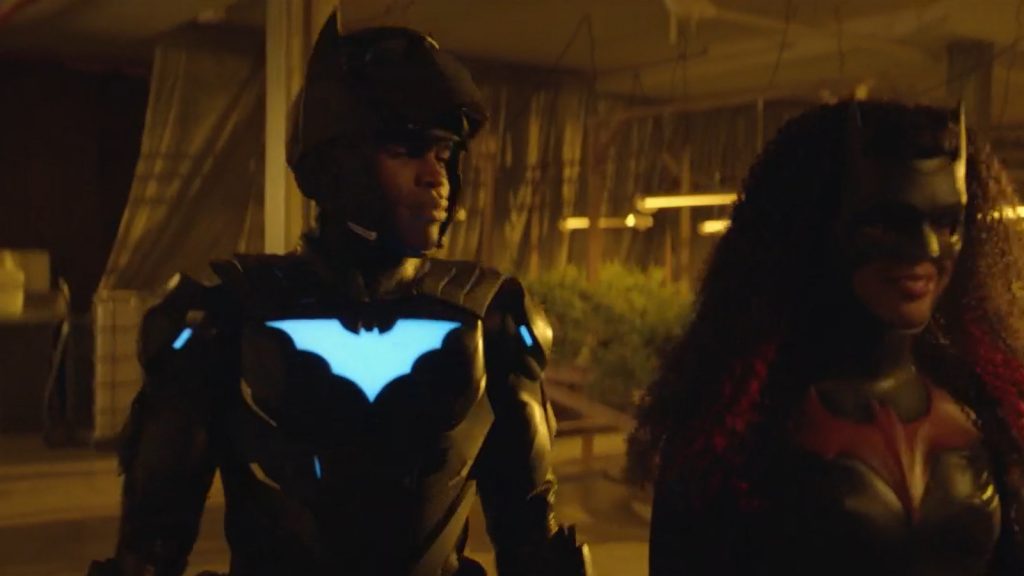 One of the highlights for me in this episode was watching Luke grow accustomed to being a hero. He’s using the fancy Bat Suit made by his father, and things are going great early on. Him and Ryan take out some goons and find Poison Ivy’s cutting, and they exchange a ton of great banter. I especially loved Luke trying to come up with an alter ego, and Ryan teases he could be called The Dork Knight. But when thugs open up on them with gunfire, his fancy suit malfunctions badly. He spends most of the episode trying to work around that problem, to varying degrees of success.

As for what’s new with Mary, she has a lot going on. Not only is she graduating from medical school, but she’s being a good daughter and doing a favor for her incarcerated father. He wants her to make sure Alice isn’t going looney (she is), so she goes to talk with her twisted step sister. Alice claims that she’s been getting tons of letters from dear old dad, and is confident he’ll pull levers to spring her from jail. Mary is incredulous, and leaves the maniac in her cell.

This Is All a Game To Her 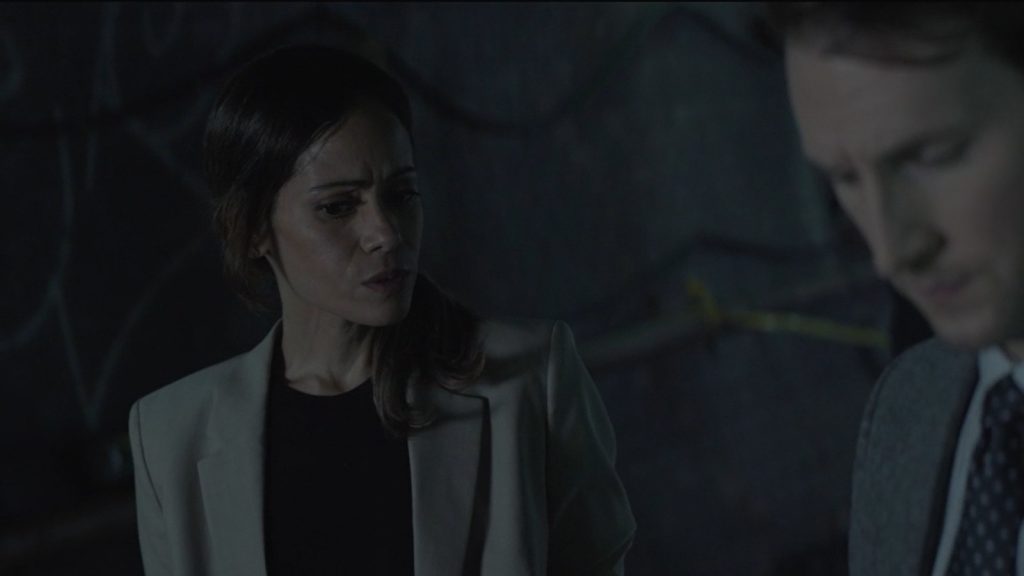 One great unexpected addition to this season of the show is none other than Renee Montoya. As someone that grew up watching Batman: The Animated Series, not to mention the comics, I’m really happy with her inclusion. She’s a perfect fit, since she’s not only a POC, but also a lesbian. And she brings a lot of detective energy to help fill the void once occupied by the Crows. Plus, it’s amazing that actress Victoria Cartagena reprises her role from Gotham. It’s safe to say her and Batwoman won’t be friends, but she’ll add a lot to the series.

The dramatic part of the episode takes place at Mary’s graduation. It quickly gets hijacked by the new Mad Hatter. Only quick thinking on Luke’s part prevents Luke, Sophie and Ryan from getting brainwashed along with the rest of the crowd. Sadly that doesn’t stop Hatter from compelling Mary to cut her professor open, and removing one organ at a time until he dies. Their only solution is to take Alice out of Arkham and use her to talk the newly minted villain into stopping his murder spree.

While Ryan goes to collect Alice, Luke puts on his suit and heads to the roof. He plants a signal jammer there to negate the frequency from the hat, preventing all further compulsion by the villain. Sadly this doesn’t stop existing compulsions, and Mary gradually takes parts out of her professor. Once the signal jammer is working, Sophie finds a fix to Mary’s predicament. By shocking the prone professor and stopping his heart, Mary recovers her free will. Though she’ll have to find a way to put him back together again.

You’re Supposed to be in Arkham 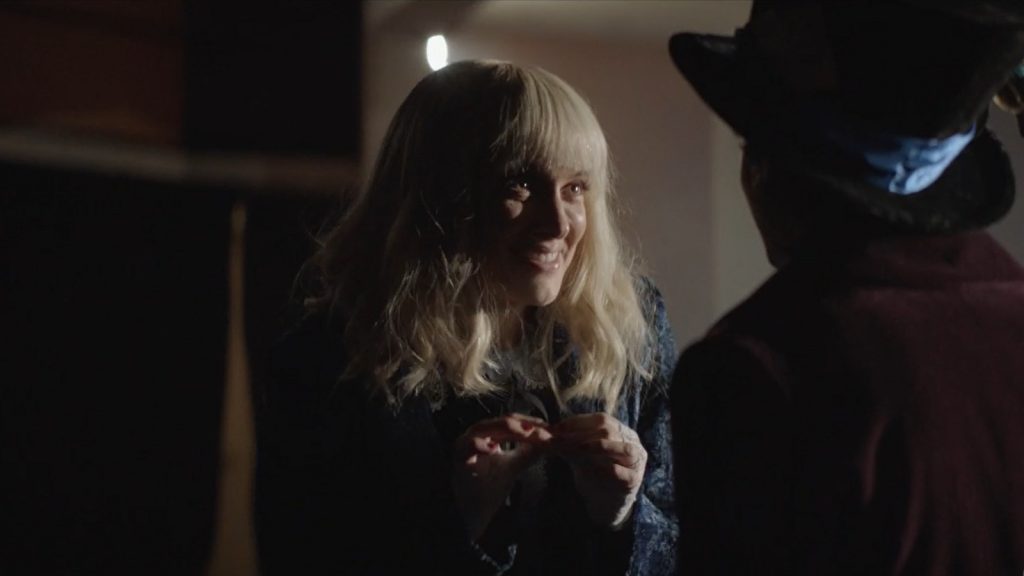 The episode ends with Ryan saving the day with Alice’s help, only to betray the villain. She had promised to let her run, but she’s not happy how Alice has been taunting her with knowledge of her mother. So back to Arkham the villain goes, but only for a short period of time. She makes a deal with Renee Montoya to help enlist Batwoman’s help to recover the rest of the missing weapons. Oh and thanks to Alice, Renee knows Ryan’s identity. So I suspect things will be very tense during this season.

Overall a really solid episode, and it was great seeing Ryan fully comfortable in her role as a hero. The only downsides for me were some illogical moments. When Luke, Mary and Ryan are talking about the stolen hat, it’s noted Bruce Wayne deprogrammed it. Yet somehow it works instantaneously for the new Mad Hatter. And I’m also perplexed that the most that was done with cuttings from Poison Ivy was boost the growth rate of marijuana. Other than that, not too much I had issues with. A good start to the season, and hopefully more great storytelling to come.