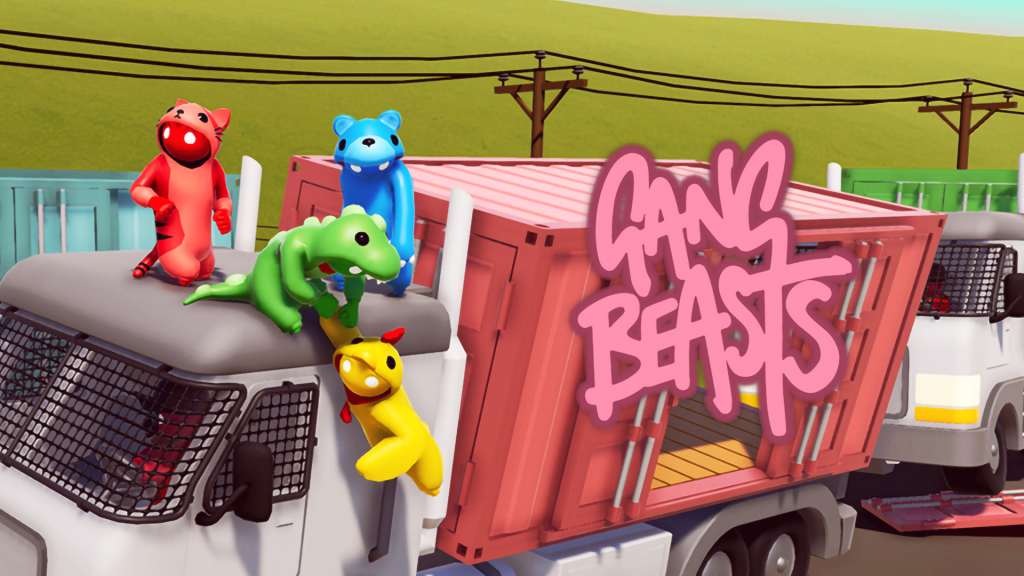 I’m ashamed to say, that despite hearing tales of the hilarious physics-based antics of developer Boanloaf’s Gang Beasts, I’ve never actually played it. Until now, that is. With Gang Beasts finally making its way to the Nintendo Switch, I decided to jump and see what I’ve been missing out on. And, as soon as I had jumped into a few matches, it was immediately clear that what I’d been missing out on was a hell of a lot of fun!

Given that Gang Beasts has been around in some form since 2014 when it was released in early access on PC, I doubt that it’s a title that needs much introduction for most. If you’re like me, however, and had never sampled this wonky physics-based brawler, let me get you up to speed. 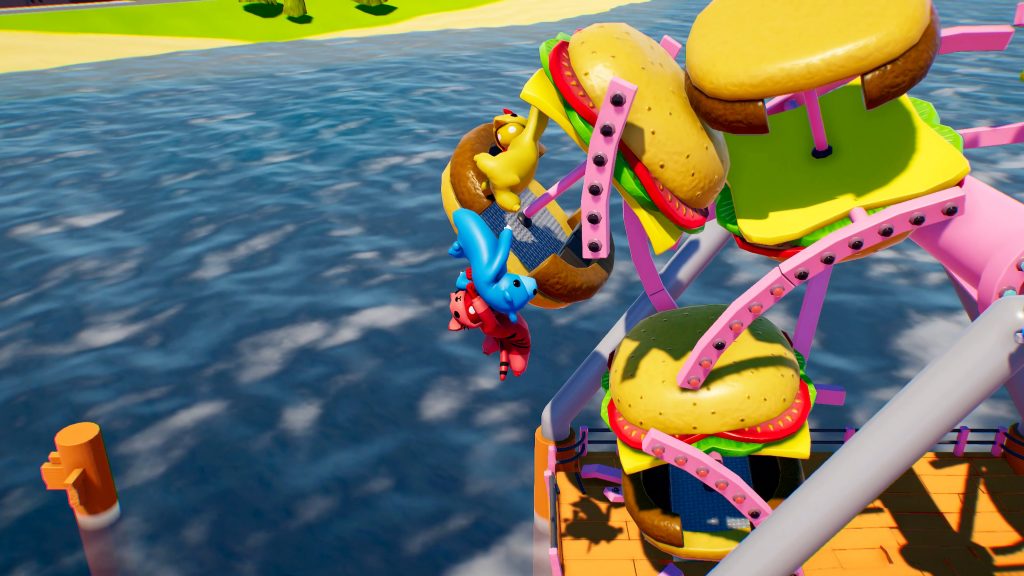 Before jumping in for my first game, a colleague here at Hey Poor Player told me to expect “absolute chaos” and described the game and its controls as something akin to “drunken Octodad.” Hilariously, he was absolutely spot on, as I think Gang Beasts is best described as drunken Octodad, with a hint of Smash.

Admittedly, upon entering the main menu, Gang Beasts comes across as quite a limited package. Players can opt to jump into local or online play, the latter of which is supported by matchmaking. The modes seem initially sparse, with free for all, team-based battles, a soccer mini-game, and wave defense mode being the only options available.

Upon jumping into my first match, though, I soon realized that this isn’t a title that needs a wealth of modes and gameplay options. Much like something like Rocket League, Gang Beasts is a nigh-on perfect example of how an amazingly fun and simple gameplay loop is more than enough to keep players coming back.

At its core, Gang Beasts is an extremely simple PvP brawler. Jump, kick, punch and grab inputs are just about the only controls you need to commit to memory, with movement handled by the left stick. As someone who usually shy’s away from complex brawlers or fighting games, I was initially delighted to see that this looked to be a brawler that catered towards someone such as I, who immediately enters button-mashing panic mode when playing any competitive combat-based game. 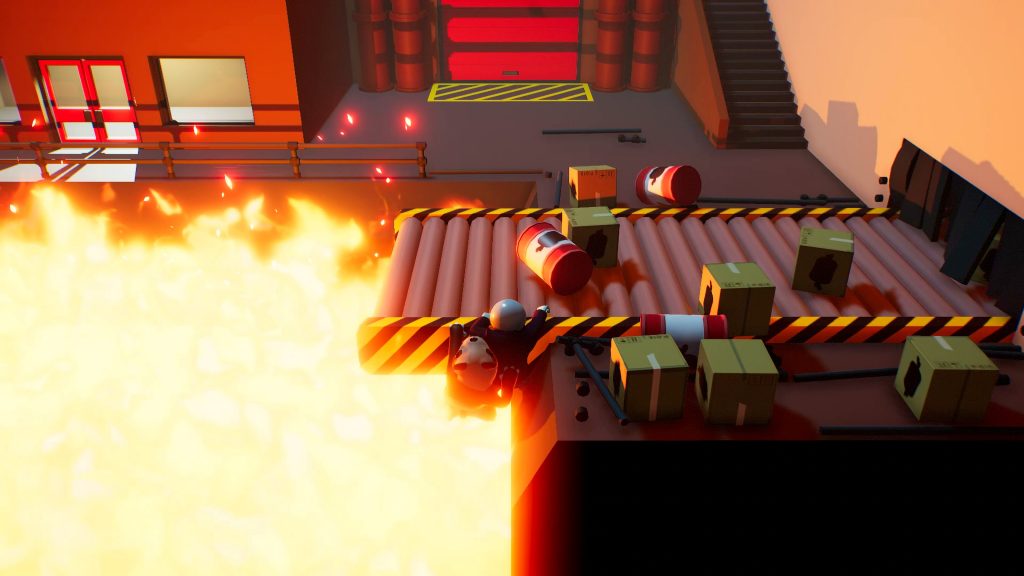 “Excellent,” I thought! “I’ve got this,” I said to myself as I loaded up the matchmaking, searching for a game of melee, Gang Beasts’ free for all mode. The next few moments were a bit of a blur, as I came to the startling realization that not only would I be fighting my opponent, but I would also be wrestling with the purposefully awkward controls and physics that much of Gang Beasts’ hook relies upon.

My opponent danced rings around me, looking like a jumping bean on acid, dressed as Rick from Rick and Morty. I spammed my attack buttons with reckless abandon, trying to make sense of it all. I bounced off walls, railings, and came dangerously close to throwing myself into a pit of burning fire, completely unaware of how best to control my floppy limbed avatar.

Then, just as I was finally getting to grips with how to move in a straight line, my opponent, who seemingly had a black belt in how to play Gang Beasts, channeled his inner Liu Kang and launched himself towards me with what appeared to be a flying kick. I was down, my eyes were shut, and before I knew it, my opponent hoisted me above his head with two hands and launched me into the fiery depths below. Shocked and confused, I said to myself; “oh boy, so there are levels to this sh*t.” 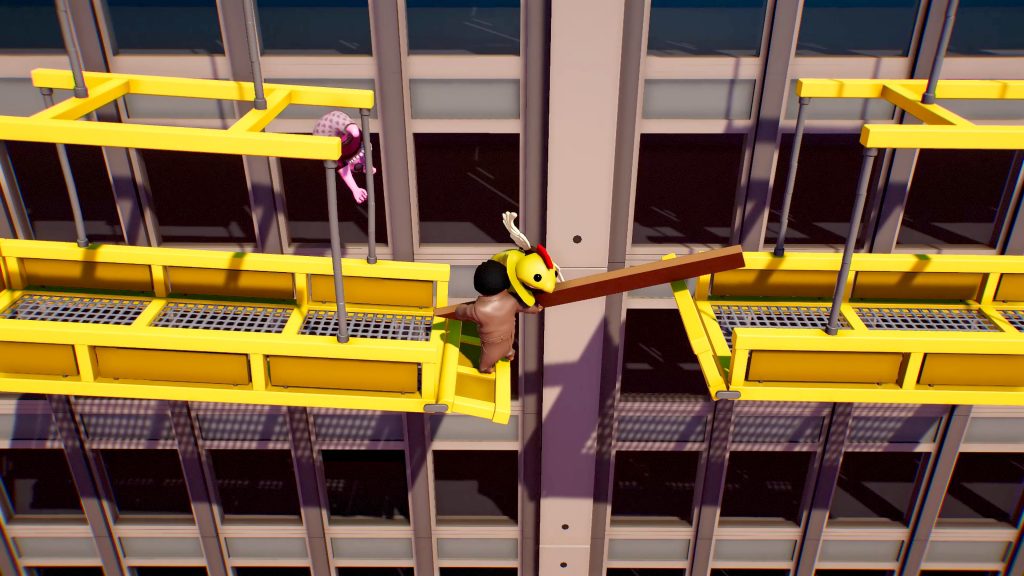 Jumping in for a few more rounds with my dignity in tatters, Gang Beasts finally began to click. At a surface level, Gang Beasts is an extremely straightforward party brawler. Dig a little deeper, though, and as with all good physics-based games, there is a method to the madness. You’ll learn to balance and manage your momentum, so you don’t propel yourself off the side of a moving truck, or a blimp, or any of the other 21 hilarious and precarious stages that battles play out on.

Next, you’ll realize that the deceptively simple move set is capable of much more than it first seems; in the right hands, of course. By combining punches, kicks, headbutts, and jumps in the right manner, more complex moves like throws, flying kicks, and leaping headbutts are all possible.

The stages themselves are there to be mastered also. It may not seem it at first, but after watching someone elegantly jump between shipping containers suspended in mid-air whilst I struggled to walk to the edge of one without plummeting to my death, it’s clear there is an art to how Gang Beasts unpredictable physics can be manipulated. 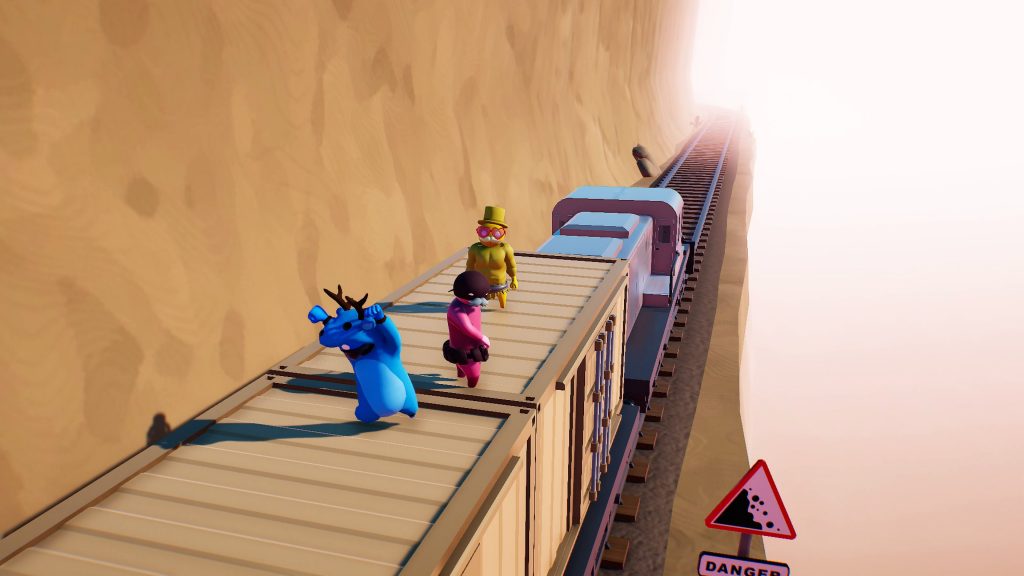 I’m never going to be able to gracefully move around Gang Beasts stages, putting together Bruce Lee esque highlight reels. It doesn’t matter, though, as, in all honesty, I think this type of game works best when you lose yourself to the absurdity and chaos, throwing strategy out of the window.

This is an experience that is tailor-made for people like me, who are just interested in sitting some family or friends in front of the TV and letting them have at it over a few drinks. Sure, you can do spectacular things if you truly master the simple move set, but I think that almost defeats the purpose of Gang Beasts. It’s a title that truly sings when you’re in the same room as a bunch of people who have no idea as to what they are doing beyond the basic inputs.

Embrace the chaos with local multiplayer, and you’ll find that Gang Beasts is capable of providing belly laughs like few other games. I spent a few hours in the company of my partner and a work friend, both of whom aren’t really into video games. Despite their lack of interest in the medium in general, they were completely absorbed, laughing their way late into the night till we got to the point where we weren’t sure whether it was the game’s physics that were causing us to repeatedly walk straight to our deaths, or the bottles of wine we had just plowed through.

It’s the above experience that has resulted in Gang Beasts definitely being something I intend to keep installed going forwards. The hilarious simplicity of it perfectly complements a party atmosphere, and I can definitely see this becoming part of my regular rotation when I have friends over before heading out for drinks.

Besides the free for all battles where my time reviewing was largely spent, Gang Beasts also has team-based battles, as well as a football and horde mode style mini-game. I’ve only briefly dabbled with these, and can’t wait to dig deeper into these modes and see just how chaotic things can get when upping the number of players on screen.

Your Mileage May Vary 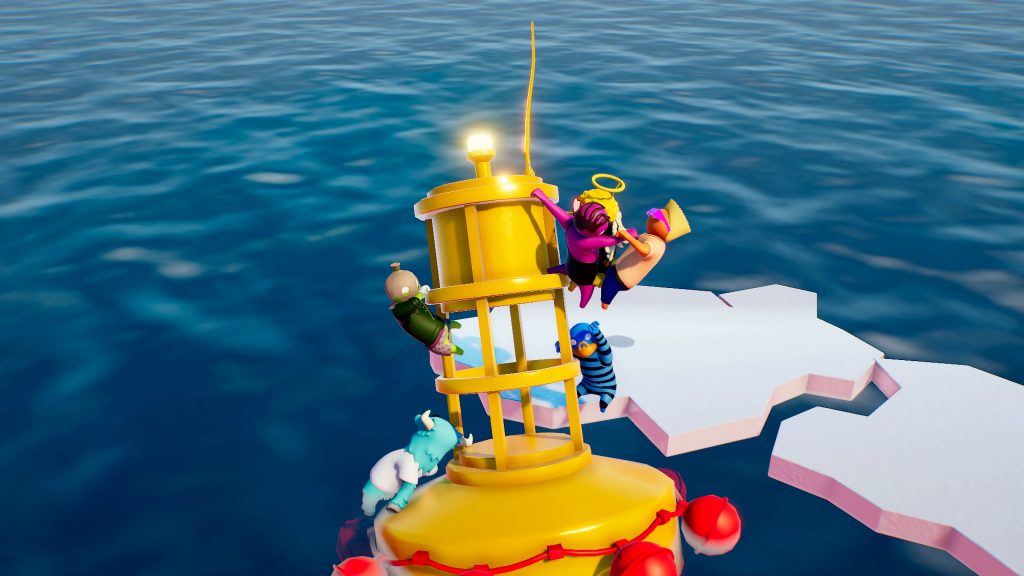 Honestly, it’s hard to find fault with Gang Beasts. The only complaint I can really level at it is the lack of variety in modes which I touched on earlier. The football mini-game is a blast, and it would be great to see what else the developers can do with the whacky physics. At the same time, I’m somewhat hesitant to even call this a gripe, given how fun the existing modes already are. That’s not to mention the flexibility and variety already within those modes in terms of stages and how many players you add to the mix.

I still think it’s worth calling out though, as your mileage may vary depending on how much of a kick you get out of what is already in place.

Unless you categorically hate having fun, Gang Beasts’ hilarious and deceptively simple physics-based combat is an absolute blast, especially when played locally with friends and family. Sure, it could perhaps be a bit more fleshed out in terms of modes, and playing online may not result in the same level of fun as local play. However, when viewed purely as a local multiplayer party game, which you can’t help but feel is the way it was intended to be played, I can’t think of many experiences that are as capable of entertaining for an evening in the way that Gang Beasts is.

Full Disclosure: A Gang Beasts review copy was provided by the publisher.