Rainbow Billy: The Curse of the Leviathan Review: A Feel-Good Game that Passes with Flying Colors

The older I get, the more wholesome games appeal to me. There’s something just… comforting and warm about them. Like if a blanket were a video game. They’re just cozy. That, and it’s nice taking a break from serious subject matter and dark narratives to engage with something more light-hearted. I feel like there’s really a dearth of RPGs with really light-hearted themes. It’s a gap that ManaVoid Entertainment boldly filled with Rainbow Billy: The Curse of the Leviathan.

You’ll Be a Regular Hue-dini 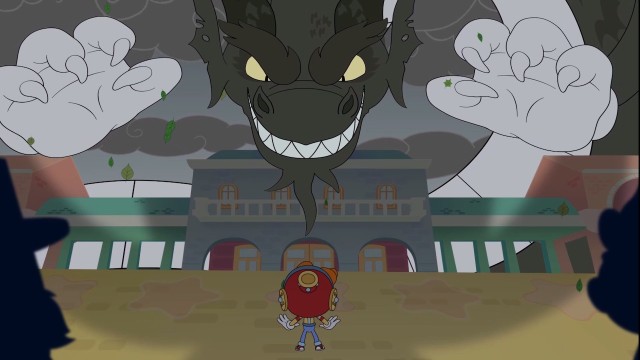 Rainbow Billy begins with the titular character angering the great Leviathan. He rises from his deep-water slumber and curses the land, stealing from it all its color. And as the color is leached from the world, so too is the joy and confidence of its inhabitants. Billy manages to juuuuust escape on his boat, the magical, talking Friend-Ship (yes, that is in fact its name, and yes, it’s amazing). It’s up to Billy to find the color cores hidden in each area and return color to the land. In order to accomplish this, though, he’ll need to recruit a bunch of friends to aid him on his quest.

Time to Shade and Abet Your Friends 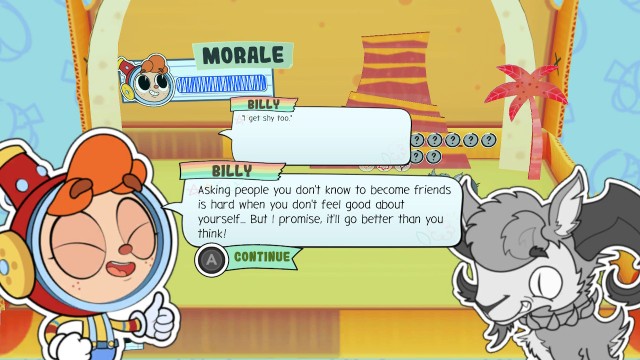 The world of Rainbow Billy is divided into several distinct oceanic areas, and within these areas, there are quite a number of small islands scattered about each ocean. You’ll need to sail from island to island in your Friend-Ship, but you’ll need to be careful. You have a limited amount of fuel, called Rainbow Fuel, that can only be replenished by entering the waters of re-colorized islands. Adding some delightful tension to your travels, as your Rainbow Fuel meter is slowly depleted, Leviathan’s arms will slowly rise up out of the sea around you. Should you run dry, he’ll pull the Friend-Ship below the waves, and you’ll be forced to set sail from the last island you visited. Additionally, when you first reach a color-bleached island, you’re pretty much stuck there until you restore its color. Once the color has been restored, you can fill up on Rainbow Fuel anytime by swinging by that particular island.

So how do you bring color back to an island? That’s honestly one of my favorite parts of the game. Somewhere on that island, you’ll need to find a poor creature who has had their color stolen from them. More often than not, you’ll need to navigate through some interesting and fun puzzles to reach them. Exploring an island is actually really reminiscent of Paper Mario – characters are 2D in a 3D environment, and there are some basic platforming elements. You can jump, you can activate switches, and interact with some parts of the environment to solve puzzles. Once you manage to reach that island’s creature (or sometimes creatures), you’ll need to engage it in battle to help it regain its stolen colors.

Play Your Chips Right to Come Out on Taupe 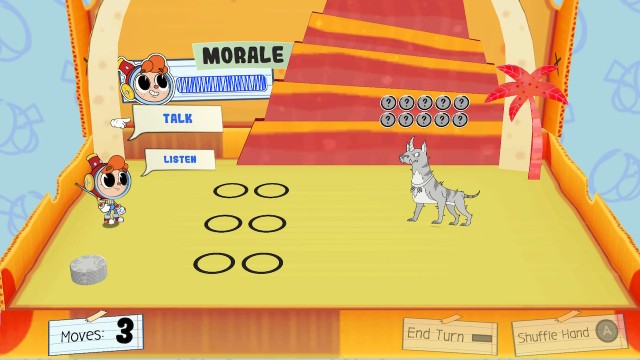 I use the term “battle” loosely here, because the combat of Rainbow Billy isn’t really combat. You’ll enter an adorable cardboard staging area, where you’ll confront each distressed creature. At the start of each turn, you can choose to listen or talk. I definitely recommend listening often, as it doesn’t cost you a turn, and you can glean valuable information on how to proceed with your conversations. Talking is extremely important. Each creature will be overcome by fear, anxiety, worry, low self-esteem, or more, and you have to make the right selection to help them get over their troubles. If you choose to say something that makes them feel better, you’ll reveal a color above their head. These color indicators are important, because they show you exactly what attacks you need to recolor your flustered little friend.

To attack, you’ll draw chips from a pile, which consists of the friends you’ve recruited so far. Each friend begins with a single color that they can fill in when they attack, but can be leveled up to gain access to three colors in all. You have a set number of actions that can be taken on your turn, so you’ll need to play your chips wisely. These chips can be arranged in rows, or you can let one chip occupy its own row. Once you have them arranged to your satisfaction, you can launch your “attack.” Of course, it’s not really an attack, as you’re just filling in colors and not causing any real damage. Each row of chips that you play requires you to successfully complete a microgame in order for your colors to connect. There’s quite a range of games, and you can tell ahead of time which one you’ll need to play by looking at the left corner of the lead chip in a given row. These microgames are perhaps a little simple, with variations on slot machines, Pong, rhythm games, and more.

One in a Vermillion 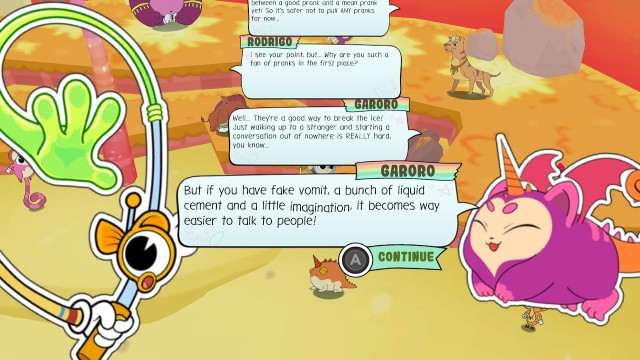 After you’ve completely finished your turn, it will be the creature’s turn. Typically, they’ll simply attack you directly, which depletes your “Morale” meter, which is essentially your HP. Run out of Morale and you’ll be forced out of the battle and have to start over. Sometimes, though, they’ll inflict what basically amounts to status ailments, such as setting some of your chips on fire, so that they damage you when you play them. Thankfully, you can level your existing friends up so that they can help you even more in battle. Once you successfully recolor a creature, they’ll automatically join you and live with you in the Friend-Ship. You can visit them inside the ship, and give them special items (or gummy fish, if you go fishing for them!) to raise their friendship level. Doing so will unlock an ability that will activate when placed on the field, such as restoring Morale or powering up moves, while also gaining access to additional colors. Leveling up your friends is easily one of my favorite parts of Rainbow Billy, as you’ll help them through their fears and worries with some incredibly heartfelt dialogue.

All the Right Mauves 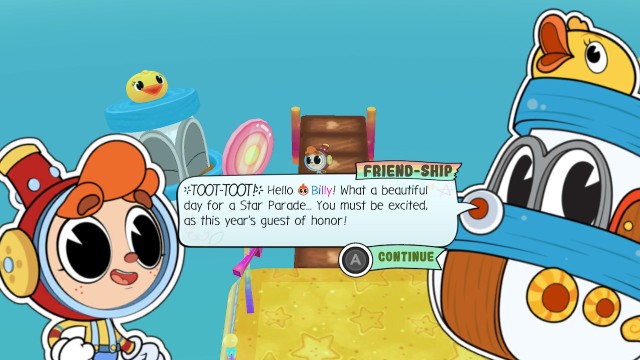 There’s no missing that Rainbow Billy is a gorgeous game. Everything has this wholesome, charming, lovely hand-drawn cartoon quality to it. The mix of 2D character models with the 3D landscapes works perfectly, even when it feels a bit too Paper Mario-y. Each and every friend is unique and lovingly rendered, and in a lovely little touch, they’ll slowly regain their normal colors as you battle them. The whole game really does feel like a feel-good children’s cartoon brought to life. The music is catchy, and while there’s not a huge variety to the soundtrack, what is there is fantastic.

Honestly, it’s hard to find anything wrong with Rainbow Billy, and it’s such a sweet, wholesome game I almost feel bad pointing out flaws. Unfortunately, there are a few, here and there. On the Switch, the frame rate does stutter sometimes. Not frequently, but when it does, it’s quite noticeable. The microgames during battle can get pretty repetitive, and the battles don’t always feel as challenging as they could. Finally, for some odd reason, the resolution of the images of your friends when you look at them in your notebook is… not great. But inexplicably, it’s not all of them that are blurry. Honestly, these are fairly minor issues.

After All is Red and Done

Rainbow Billy is the lovechild of Wind Waker, Paper Mario, and Mr. Rogers that we didn’t know we needed. It’s sweet, it’s heartwarming, it’s addicting, and it’s beautiful. Not only that, but it tackles difficult topics in a rather mature and thought-provoking way. These topics really run the gamut of the human experience: self-esteem issues, anxiety, fear, anger, strength/masculinity, and so many more. Honestly, this game can be played by children and adults – there’s something to learn from the experience for everybody.

Paint the world of STRAFE in pixelated blood.     Indies have earned a reputation for banking on nostalgia. Yooka Laylee, Mighty No. 9, and the upcoming Bloodstained have…