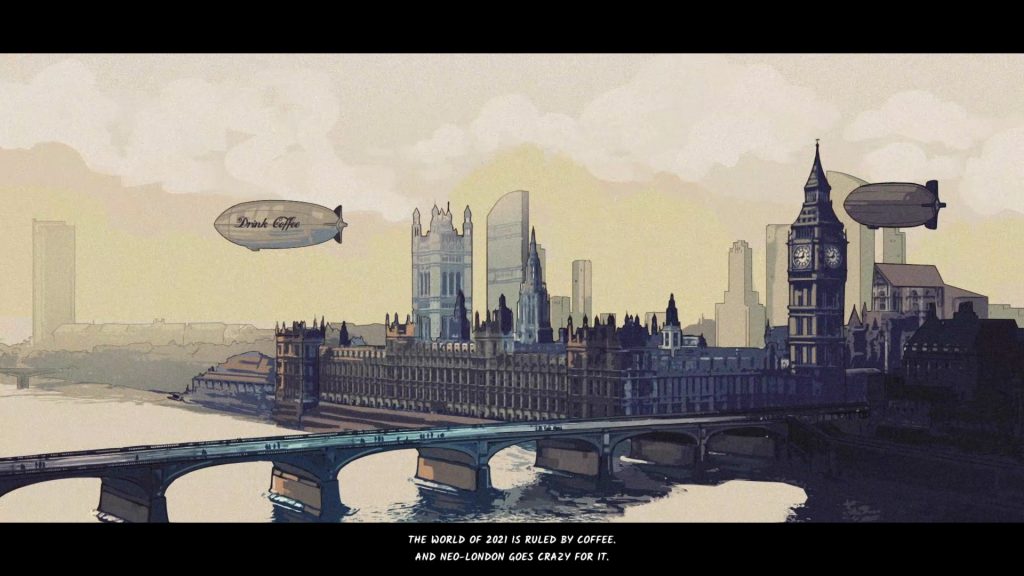 In 22nd-Century Neo-London, coffee is king. The bean is infused in just about any drink, drug, food, or newfangled fad, its smooth, swirling bite enticing both the casual drinker and those looking to make their mark on the metropolis. It’s coffee that’s at the center of this story — it’s both your cover and your lead to a certain missing person, lost in the underbelly of this dark roast world. A story that’s all bitter and no sweet, Coffee Noir scalds players and protagonist, putting them through the grind of private investigations blended with business management. Will this brewing mystery leave you burned? Will you take your lumps, sugar? Or will you actually get to the bottom of this bleak, black pot?

Developed and self-published by Polish indie team DOJI, Coffee Noir is, at first glance, something of an oddity. It’s not every day a fully-voiced noir game mixed with sales tactics and business management falls into your lap. The pricetag equivalent to five cups of coffee (my actual yardstick for game prices and not an intentional pun), Coffee Noir may seem a little steep for a 10 hour playthrough for the inexperienced. For the connoisseurs, however, they know quality when they see it, and Coffee Noir is indeed quality to the very last drop. 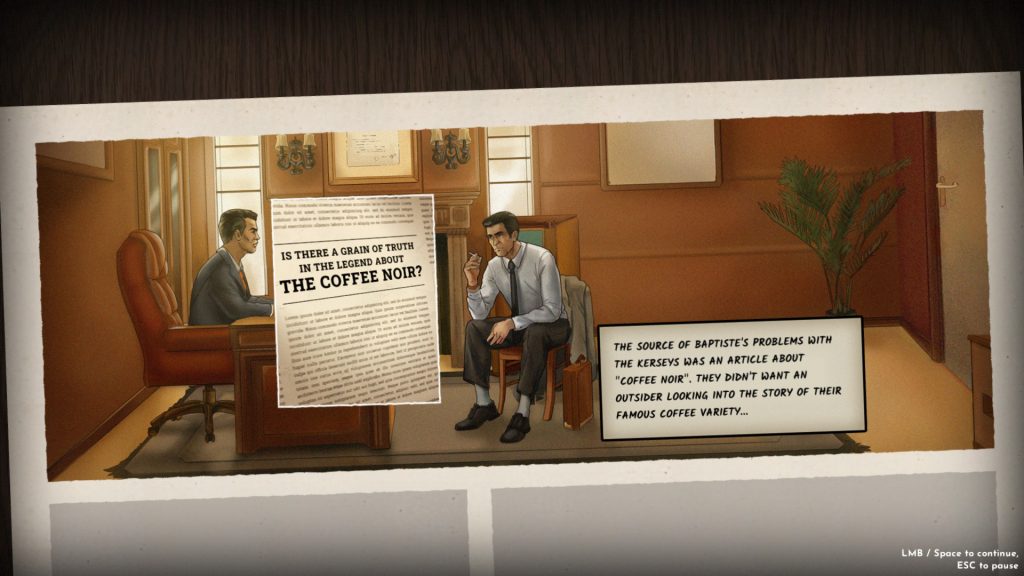 Coffee Noir follows the story of Arthur Oliver, a cop-turned-PI with a tragic backstory befitting any good noir. The love of his life murdered in cold blood a decade prior, Arthur found Neo-London far too painful and left the busy city in search of a more blank canvas. Perhaps his return was inevitable, as his lost love’s daughter, Claribel, called him back to investigate the disappearance of her father. Certain that his coffee business was the reason behind him vanishing into thin air, Claribel sets him up as a coffee salesman within her family company. Convinced that the mystery surrounding his departed lover’s murder can be uncovered fulfilling Claribel’s request, Arthur takes up coffee sales. Will he be able to adequately blend both sleuthing and sales, or did this average joe pour a cup he can’t drink?

If Post-Warpunk isn’t a thing yet, Coffee Noir has shown me the glorious possibilities that exist with this aesthetic. Sure, I love Steampunk to absolute death and Cyberpunk is certainly popular, but if extending the ’40s aesthetic in a modern context is what’s next, we’ve “-punk” peaked. Everything about this world was so cleverly 40s, from the cars to the clothes of course, but even in how it handled technology. Gone are the touchscreens and streaming; instead, we have old-fashioned knobs and dials, futuristic-looking cassette tapes, monitors, and headphones… even the internet has been replaced with a more analog feeling “datanet.” I’ve never said I’ve wanted to live in a video game world before, but I’ll say it here: the world of Coffee Noir is my desired plane of existence. 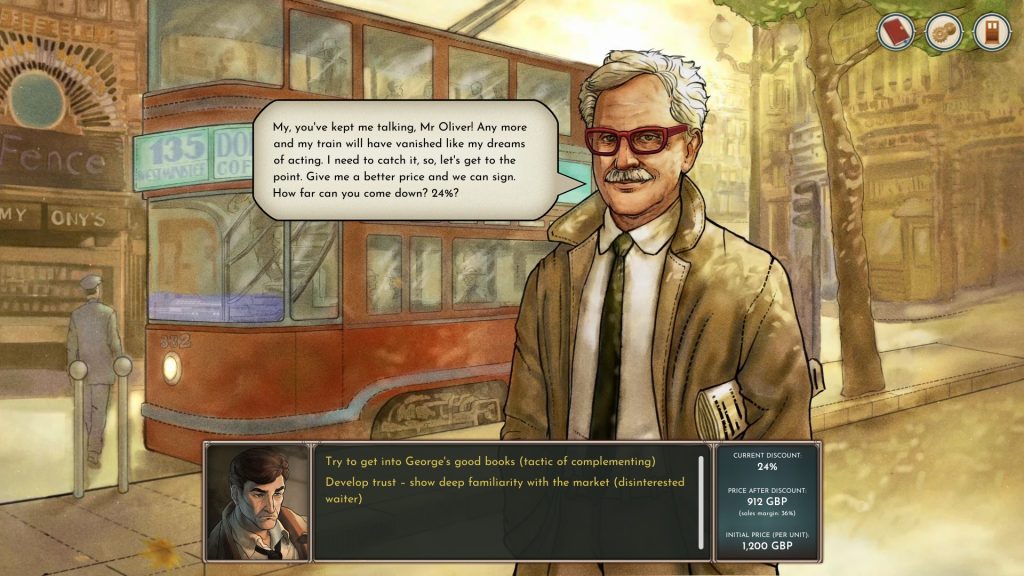 Of course, it’s not just the aesthetic of the setting, but the art style and direction of Coffee Noir that deserves praise. Fully illustrated and partially animated scenes and comic book sequences completely captivated me throughout gameplay, especially when it came to speaking with clients. I found the way the clients moved to be pretty clever, as the art team seems to have drawn two different stances for each client and then kind of “morphed” them with each breath between the two (if that makes sense). They felt dynamic without doing much, which made the people feel alive but not distracting.

Speaking of clients, speaking with clients was an entirely unique experience I haven’t seen in visual novels or mystery games. As explained earlier, you’re a PI with the cover of a coffee salesman, and since all your leads are in the bean business, you’re perfectly poised to not only strike deals with them as a coffee supplier, but get information on your missing man. If you’ve done your research, you’ll know all about your… “interlocutor” (more on that later), so you’ll know which sales tactics to use in an effort to get the best deal possible. One person may be warm and personal, so getting them to open up about their family will put them at ease; on the other hand, another person may find such tactics rude and offensive, so they’ll clam up and ask you to leave the meeting. Unlike most visual novels where saying “all the right things” to a romantic interest feels kinda gross, using the right sales tactics to strike a deal is far more palatable. Definitely not something I’ve come across before, and I found it pretty well executed here. 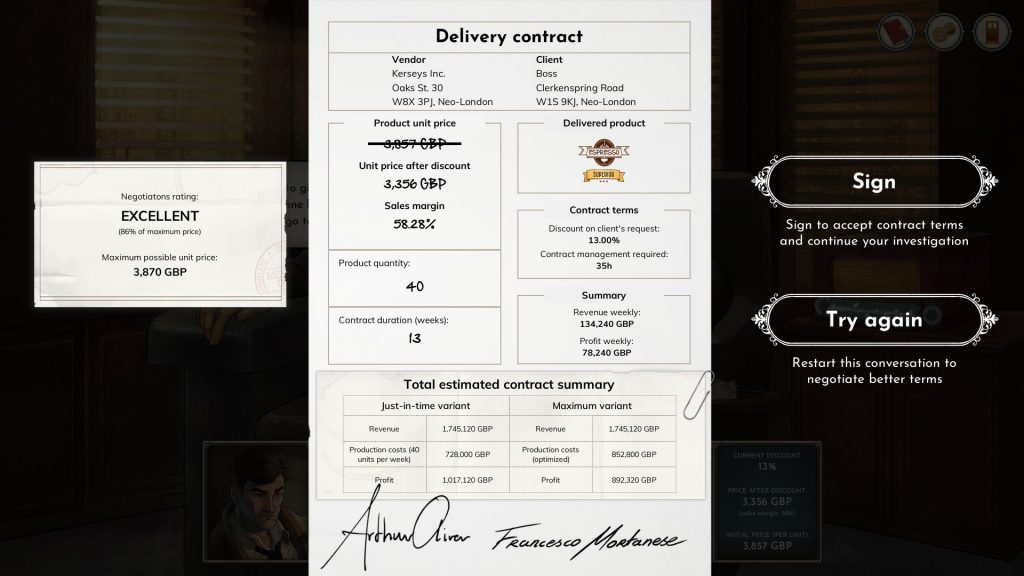 After making a deal with a lead, you’ll need to go back to your office and manage the actual business side of things. This means hiring employees, setting their schedules, ordering the types and quantities of beans, upgrading your storage and machinery, creating marketing campaigns, fulfilling contracts, and, naturally, balancing the budget. If this sounds a bit overwhelming, it certainly can be at first, but it eventually becomes second nature. After undertaking all available tasks, such as meeting with leads and running the business side of things, you can “end your turn,” which just propels the game further by a week. Gratefully, if you’ve forgotten to do something, like order beans or fulfill a delivery, the game will warn you before you end your turn, so the chances of you screwing up too much are pretty low. With that being said, if you’re not properly managing your employee schedules or sending them out for training on a somewhat regular basis, you run the risk of mishaps in the warehouse, which can lead to unhappy customers. Be mindful of your coffee business, lest you go bankrupt and the investigation is over.

There are five acts in Coffee Noir, and each one has a set amount of clues and connections you’ll need to collect and create before the next act can begin. Up on the clues board, you’ll connect clues together that, at first, feel really tenuous or already apparent (there’s really no in-between), but by the time Act III rolls around it’ll all start to make sense. You’ll have three tries per week to make connections, and if you get three wrong, you’ll have to wait until next week to try again. The act cannot proceed until you’ve created all necessary connections, so if you’re running out of tries, consider auto-buying the connection — for a price, of course. 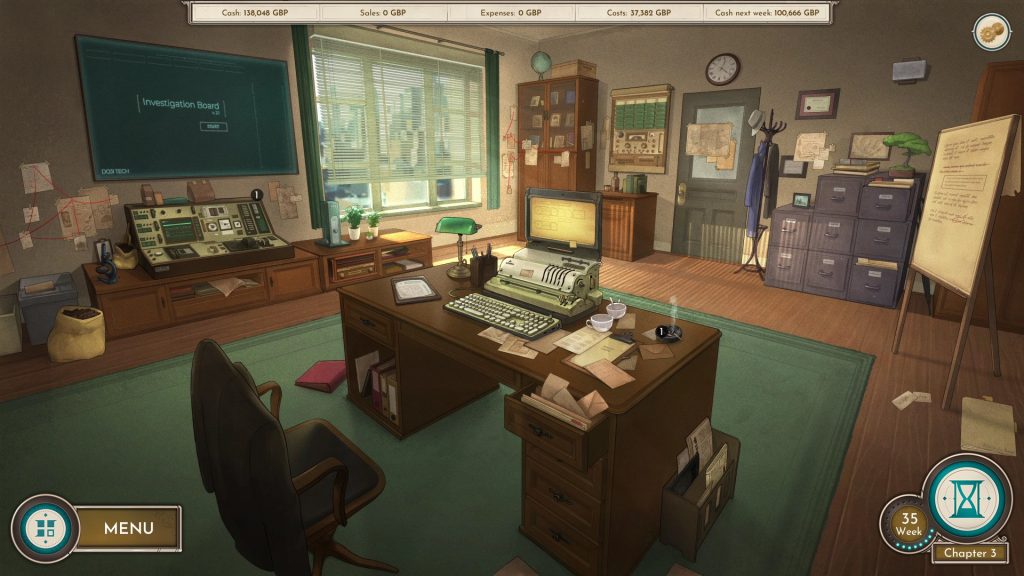 Coffee Noir had me glued to my seat for an entire day — I literally couldn’t be bothered to do anything else until I had finished this mocha mystery. Unfortunately, it has a few issues that I couldn’t overlook, the most glaring one being the English translation. Now, I will say that it was not horrible — it wasn’t, I promise — but it does have to be brought up due to its visual novel nature. Anything that was voiced (save for one or two lines) were fine, but the connections board and the card that gave players a bit of background on the client were very clunky. Phrases like “she became PR manager at x company which supplying coffee beans” or “she is a young French with strong accent” were pretty pervasive. I guess because the extensive voice acting got (almost) all the English lines correctly, the parts that were muddled stood out even more.

Additionally, some of the words chosen (for the English version, at least) were words that were either kind of clunky or flat-out not used in typical conversation. The clients you speak with are called “interlocutors,” for example, and hearing someone with an American accent talk about “uni” instead of “college” was just a tad bit odd. Now I don’t deign to imply I know every single word in my native language, but I come from a long line of English teachers and I feel like they would have used “interlocutors” once or twice in passing if it was at all necessary to know; instead, the first time I’m hearing it is, surprisingly, in this game. Again, I’m not pretending to know all the words or anything, but it was one of many strange choices that made it feel somewhat unapproachable. Although Coffee Noir is certainly comprehensible, it would benefit from a localizer.

Coffee Noir goes down like a warm cup of coffee — black, of course, no cream or sugar. It builds a coffee-based Post-Warpunk world full of mystery and intrigue, the setting something I’d absolutely love to see explored more in future titles. Its blend of noir mystery and sales/business management is certainly something new, the concepts executed competently with a bold, rich flavor. And, for all the concerned noir fans out there, it does indeed end on a bitter note — just like an espresso. If you love to get lost in a good vintage murder mystery and think you have what it takes to grow a coffee empire, Coffee Noir will provide that caffeinated challenge for you.

Editor’s note: This review is based on a retail copy of Coffee Noir – Business Detective Game provided by the publisher. 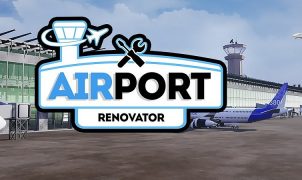 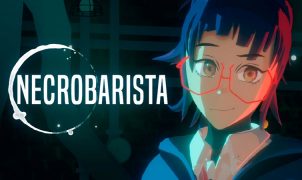