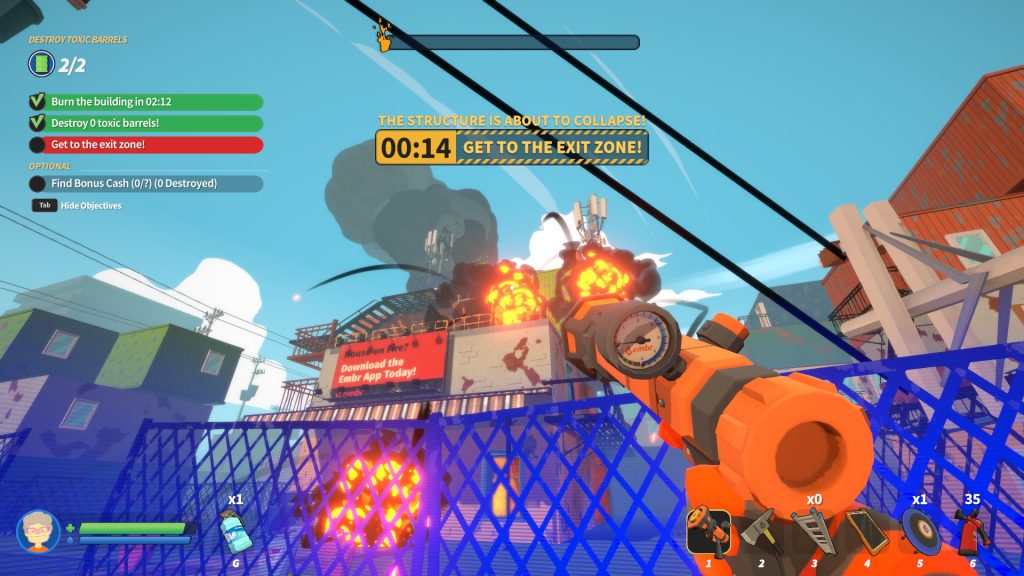 These days, it seems like there are a dozen apps available that allow contractors to take on all sorts of odd jobs to make life more convenient for customers. Taxis, food delivery, dog-walking, grocery delivery, firefighting — tons of tasks for those seeking a side hustle. What’s that? Firefighting? Yep! These days, waiting on your standard, regularly employed firefighters who are trained to save lives and property for free is sooooo un-American. Get with the times and eschew worker’s rights and any sort of company liability — use Embr instead! That’s right, with Embr, you’ll be able to pay an average joe off the streets to attempt to save you, your home, and all your valuables and maybe sorta put out the fire while they’re there. Or not. Remember, the fine print in the user agreement says you can’t sue!

If that opening made you groan and think to yourself “Oh God, can you imagine?” worry not! Developer Muse Games and publisher Curve Digital have made that horrible thought a (virtual) reality, giving players Embr, a game that contracts out your personal safety and that of your your loved ones to side hustle firefighters in the heat of the moment. Whether you take on tasks alone or team up with friends, Embr offers fun and frantic firefighting gameplay that is casual at its core. Now available on pretty much every platform — PC, console, and Stadia — Embr attempts to ignite a burning passion for firefighting in the hearts of players everywhere, but can it deliver? 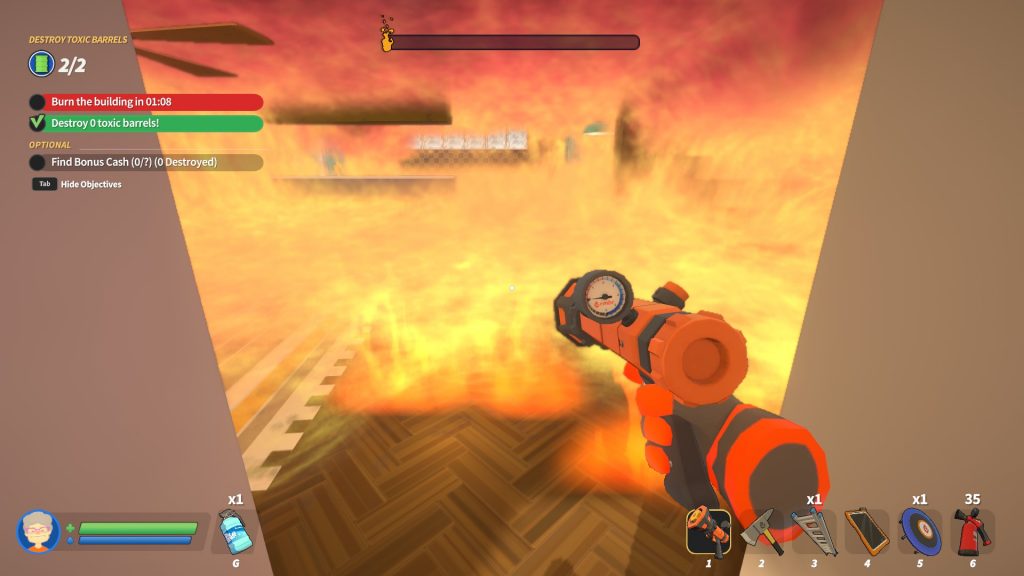 Embr’s contractor handbook seems straightforward enough — you’re here to make money putting out fires. Your clients will summon you to the burning building they’re in, the major objective being to get them out before the structure collapses. Eventually, other goals will open up, like salvaging as many items from the home as possible, finding a specific, precious item and saving it from a fiery death, burning down a building (for the insurance money, obvs), and even delivering food. All the while, keeping clients safe is the utmost priority — after all, they can’t give you a tip if they’re dead!

To keep homes from getting too toasty, players will need to purchase their own firefighting arsenal, which includes powerful water guns, an axe, a ladder, a tablet that can see where clients are, a trampoline, a fire extinguisher, water grenades, and a freezer gun, amongst other items. Additionally, the better kitted out you are in terms of gear, such as nice gloves for gripping clients and hoisting them over your shoulder, gas masks to prevent noxious fumes from getting to your brain, and flame-resistant clothing all helps when trying to put out fires efficiently. Sure, these are all fairly expensive items, but think of it this way: you gotta spend money to make money! 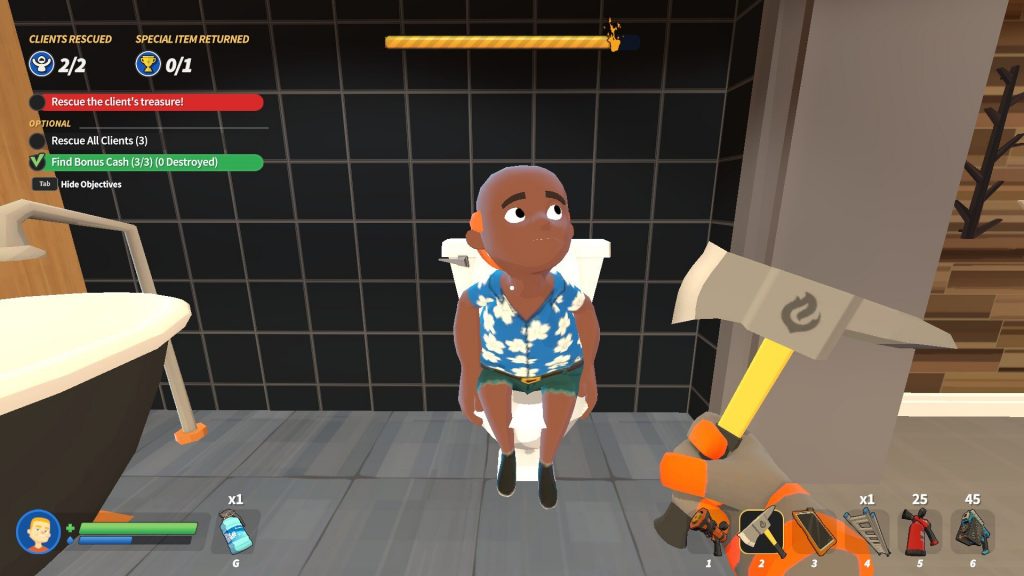 Embr is level-based, locking new on-fire buildings behind flame counters. Complete levels to earn up to 7 flames, which will unlock future levels down the road as time goes on. Some sections will need upwards of 80 flames, so if you’re struggling to get to those harder areas, stay back and try to get the earlier levels done as quickly and as efficiently as possible. This means upgrading your tools, getting great gear, and then applying all that into the fray when you save every single client, steal their piles of cash, and fulfill any other last minute requests they may have.

My first impression with Embr reminded me immediately of Kill It With Fire — and no, not for its namesake, but because it was another game where you’re called to a location to handle a job with various tools at your disposal. What seems like an intense action game is actually a casual puzzle game, clients always loading in the same spots depending on the mode. After a few hours of playing and replaying levels, it’s clear to see that this isn’t a simulator but a puzzler with a little bit of a narrative and some fun co-op elements. In this sense, putting out the fire isn’t your actual objective as one might think, rather saving clients and getting money. 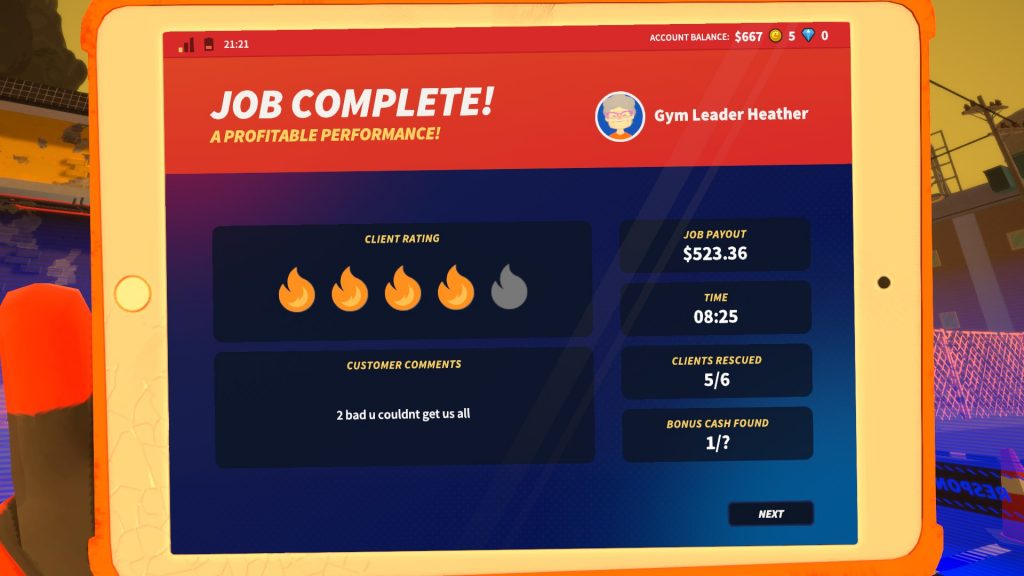 Although I had a lot of silly fun with Embr, there are unfortunately a few issues that still need ironing out before it’s perfect. For one, destroying barrels is often an objective in some of the game modes, but the barrels don’t seem to load correctly so they appear invisible. I was only able to find them due to the animated effect they give off separate from the barrel asset. Additionally, when in a mode that asks me to save a specific, precious item, the game sometimes doesn’t register as the objective being completed if I’ve gotten the item to the safe zone, meaning I have to abandon the job and fail despite the item indeed being safe. These and a few others weren’t game-breaking bugs, but it did detract from the experience — who wants to give up on a job completely done?

Despite any imperfections, Embr is a really fun casual puzzle game that takes extremely NOT casual subject matter and brings the heat down to a palatable temperature. I love that these people don’t seem too bothered that their homes are on fire, preferring to tap away on their phones amidst the smoke inhalation and flames licking at their heels. It was a relief to see they didn’t gnash their teeth and rip out their hair when one of their loved ones died in the blaze due to my negligence. And the implication that Canada’s constitution has specifically outlined goals to bring socialism to the U.S. via a competing app named Hosr that pays its firefighters a guaranteed minimum wage of $15 Canadian dollars is… let’s just say I’m loving the lore in a very goofy firefighting game.

Embr doesn’t want to set the world on fire, it just wants to start a flame in your heart. And then make sure that the flame is out. And that everyone is safe. And did you get your food on time? Yes? Could you please tip your delivery driver/firefighter so they can continue to give you a hot meal and cold home? Thanks! Okay so yes, Embr may attempt quite a few things in its own wacky way, but it’s literally never a dull moment. Whether you blaze it on your own or with an entourage, Embr is a great way to burn through a weekend.

Editor’s note: This review is based on a retail copy of Embr provided by the publisher.