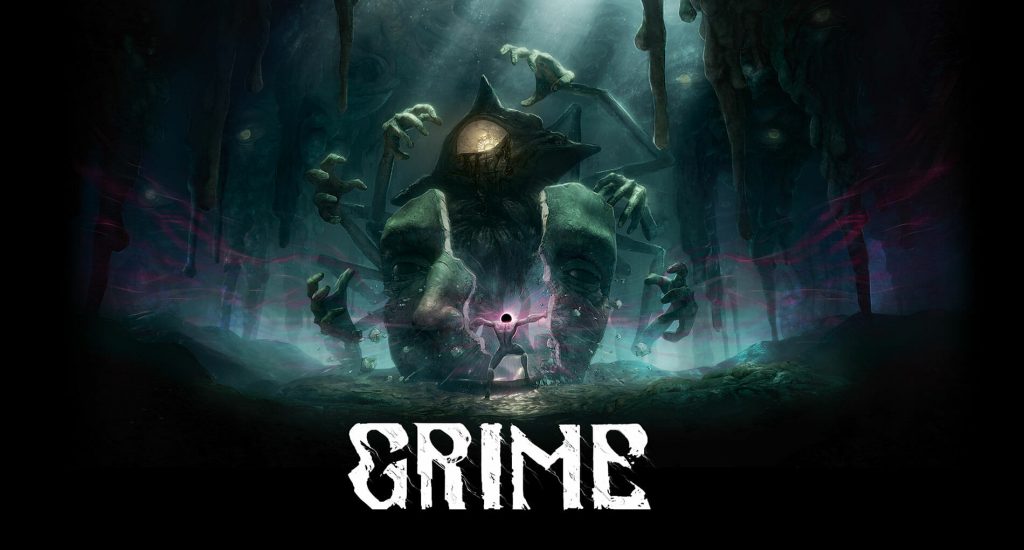 The origins of the Metroidvania genre aren’t exactly difficult to discover. I mean, the term itself is literally a mash-up of the two games that inspired the genre in the first place. And, in all honesty, I think that that’s a pretty lovely way to pay tribute to them. But I don’t think that it’s necessarily as all-encompassing a term as it once was. Feel free to take this with a grain of salt, because this is just my opinion, but I think that there was a bit of a “Metroidvania renaissance phase,” and that said phase specifically happened because of one game—Castlevania: Aria of Sorrow. Now, I’m sure a lot of you out there know what AoS is and why I’m talking about it. But, if you don’t, there’s really only one thing that you need to know—it contained a mechanic that allowed players to steal the souls of monsters and, in the process learn a new ability. And, yes, I’m talking about every single monster in the game.

Thanks to Aria of Sorrow, an emphasis on “ability collecting” now exists within the Metroidvania sphere. It, of course, isn’t a mandatory mechanic—there are plenty of modern-day Metroidvanias that do away with it and work just fine—but it has worked its way into a number of subsequent Metroidvanias. And, wouldn’t you know it, GRIME—the game that we’re looking at today—just so happens to be one of them! It appears that this one is a bit of a special case, however. While it does feature an ability collecting mechanic, it also attempts to simultaneously take a Souls-like approach. And the end result? Well, something that’s kind of in the middle of things—good, but not great. 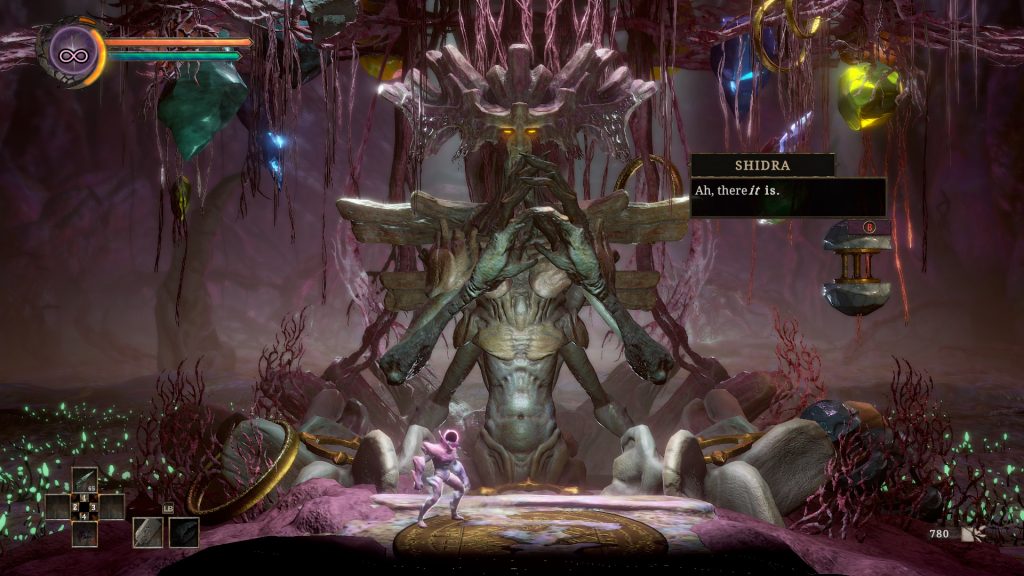 As far as narratives go, GRIME‘s is pretty interesting. In essence, Basically, the world of GRIME is pretty out-of-whack by the time the game begins and, because of that, you were just “whoopsie’d” into existence. You don’t really know who, what, or where you are, and it doesn’t seem like your character does, either—all you can do is press onward, make use of your unnaturally useful talents to solve any problems that get in your way, and hope that something—or someone—will eventually give you purpose.

While GRIME isn’t without dialogue, the game, overall, takes a “show, don’t tell” approach to the overall setup. Players will be tantalized with bits of info here and there and then thrust into the world—and, oh, what a world it is. Though exceptionally cruel, dreary, and unforgiving, GRIME‘s captivating landscapes (and the dangers lurking within them) are honestly a sight to behold and you really feel like you’re learning more about the game just by playing. While the phrase “there’s beauty in pain” isn’t one that I’d generally jump up to agree with, GRIME‘s tragic-yet-breathtaking aesthetics and intriguing story somehow manage to captivate this sentiment perfectly.

Between a Rock and a Hard Place 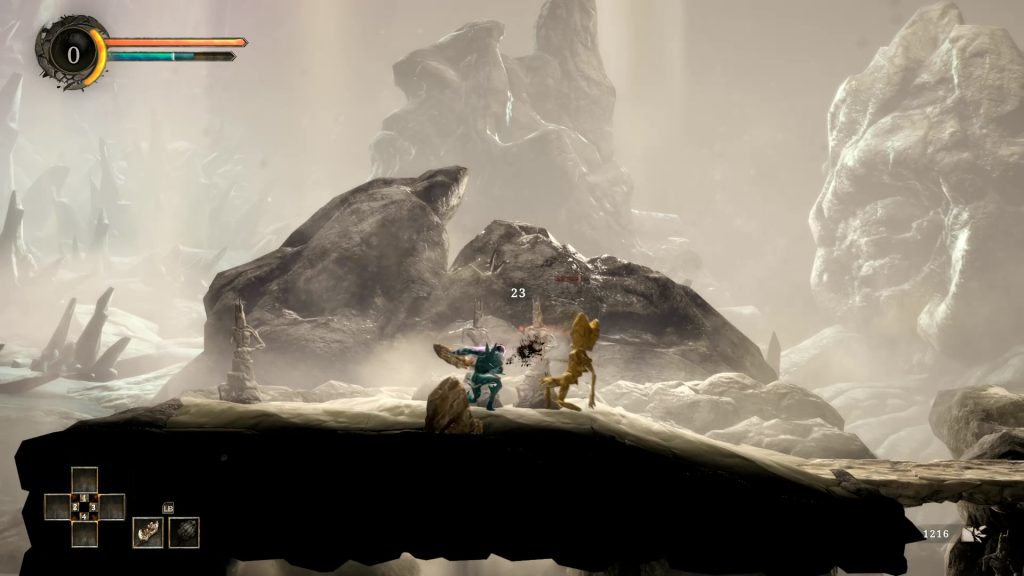 GRIME’s world is an unforgiving one, so don’t be afraid to fight back.

GRIME is a hard game, and it’s not just because almost everything is made from stone (ha!). Wonderfully witty jokes aside (it’s okay, I know that it wasn’t actually funny), GRIME really is pretty tough. The game takes a very Souls-like approach to most things meaning that, while still rife with fun Metroidvania staples like hidden items and secret rooms, GRIME never strays too far away from its focus on making sure that the player is in some sort of danger.

Generally speaking, it isn’t a great idea to make combat overly complicated in a Metroidvania—but GRIME seems to be well aware of that. Instead, the game opts to make fights feel very deliberate. In true Souls-like fashion, every dodge, parry, and attack means something—swinging your weapon around wildly like you would in most Metroidvanias would probably lead to a pretty fast death. And, given that this game is a little on the stingy side with its stamina growth, you probably could only swing around said weapon around half a dozen times before needing to rest, anyway. 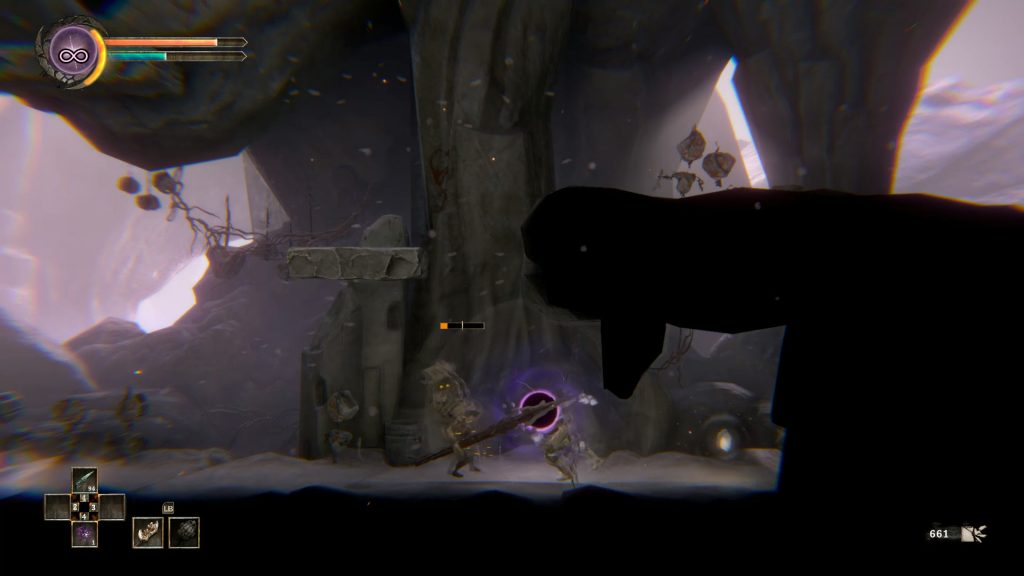 I’d say not to let your powers get to your head, but…

Now, it’s time to get onto my favorite part of modern Metroidvanias… or, at least, what should be my favorite part—ability collecting. As with many “post-renaissance” Metroidvanias, GRIME features a hefty emphasis on hunting enemies down and claiming their powers for yourself. And, in this case, I mean that quite literally as you use the vortex that is your head to absorb them. And that isn’t the only difference that GRIME has going on when it comes to gaining new abilities from your enemies.

When it comes to the ‘ol ability collect-a-thon, GRIME marches to the beat of its own drum. For starters, you can essentially guarantee an ability from every enemy, so long as you approach things correctly. While you can attack and kill them normally, players are able to use the previously mentioned “vortex-head-absorption technique” (pretty sure that’s not its official name) to absorb their enemy. But you won’t gain their ability right away! Instead, you’ve got to complete hunts, which just boils down to absorbing the same enemy multiple times. After that, you’ve unlocked the ability and it’s yours to use forever! Hooray! …Okay, well, maybe that’s not exactly how things work. 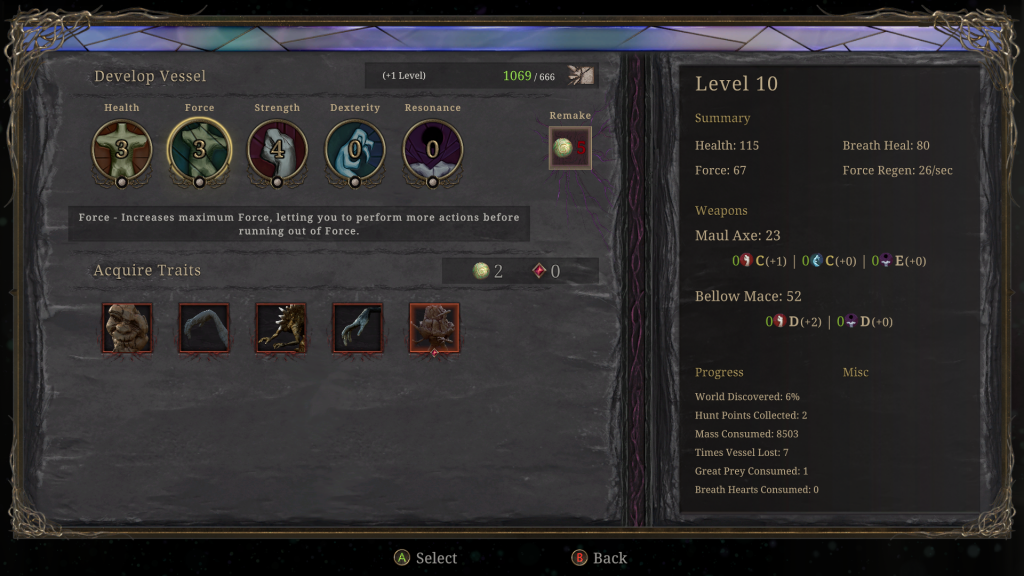 It isn’t enough just to hunt enemies, you have to actually BUY your new abilities.

So far, I’m totally on board with how GRIME handles the acquisition of abilities. Unfortunately, it loses me at the next part. While it’s true that you can acquire new abilities from enemies simply by hunting enough of them, you acquire them in a dormant state. There’s actually an extra step that you have to take if you want them to be of any use. Throughout the game, you’ll encounter particularly powerful enemies and special items which, when defeated or consumed respectively, will grant you “Hunt Points.” And, it’s only through the acquisition and subsequent spending of Hunt Points that you’ll finally be able to make use of your abilities.

Maybe it’s just me, but I feel like the fact that GRIME liberally sprinkles new abilities throughout the game only to bottleneck them with this Hunt Point system is a real punch in the gut. Keeping in mind that that this game also has a major Souls-like vibe, I get that they don’t just want to hand out abilities hand over fist. And that’s totally fine. However, I think that a much better idea would have been to make hunt points grindable rather than some kind of sparse currency. The way it’s set up almost entirely ruins the spirit of ability collect-a-thons, and, in my opinion, works against the player’s incentive to collect as many abilities as possible.

Rough Around the Edges

There’s no arguing that GRIME is one of the most breathtakingly beautiful Metroidvanias ever created, and it’s obvious that a lot of love was put into it. Unfortunately, the attempt to create some kind of compromise between Dark Souls and Castlevania: Aria of Sorrow created a product that, while still undoubtedly fun, felt a little too lukewarm at times to truly be considered “great.” I think that if certain things got revamped, GRIME could be a totally killer Metroidvania. But, until then, it’ll just be “good.”