Suzerain Review: Re-elected for a second term on the Switch 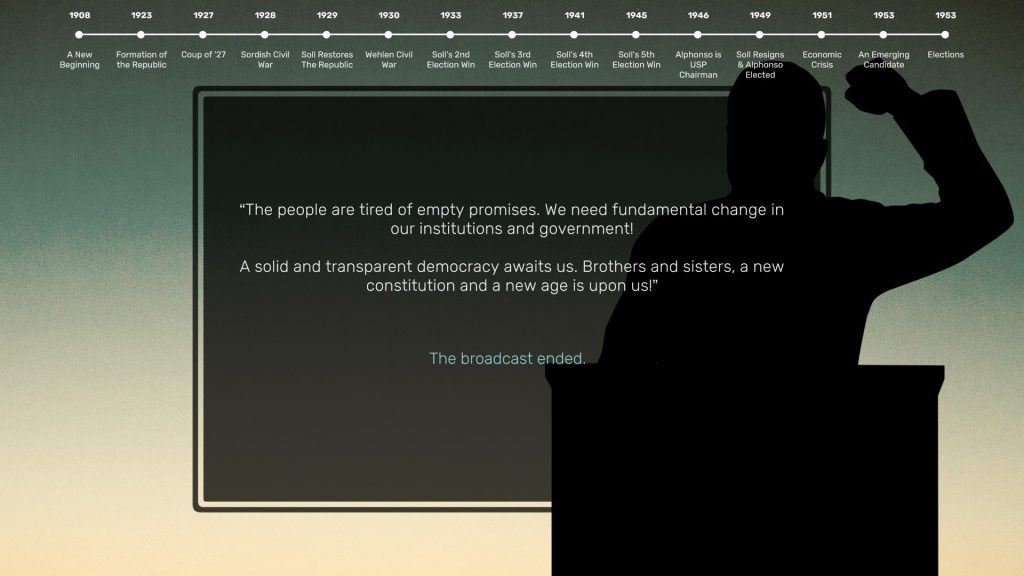 Suzerain may appear to be a strategy game akin to Civilization at first glance, but its narrative-heavy gameplay feels more like West Wing meets 80 Days. With a description like that, it’s a no-brainer why I absolutely adored Suzerain when it first came out on PC. So when Fellow Traveller and Torpor Games announced a Switch port, I was both excited and concerned; excited because an entirely new audience would now be able to enjoy an incredibly deep political game that takes intent into account as much as action, but concerned because the largely mouse and menu-based controls can often be frustrating on console. How would Suzerain fare in its second term?

For the uninitiated, Suzerain has players taking on the role of Anton Rayne, the fourth president of Sordland, at a critical point in his country’s history. After carefully crafting Rayne’s backstory through a series of selections in the prologue, players can step into the Maroon Palace as an authoritarian dictator, an empathetic socialist, a staunch communist, an experimental capitalist, or a variation of those four polarizing axes. Players will then need to choose their focus for their presidency, such as education, economics, or health, and consider expanding the previous president’s policies or present your own. Can you last all four years of your first term, achieve your goals, and keep Sordland strong and free against all dangers, crises, and threats — domestic and international? 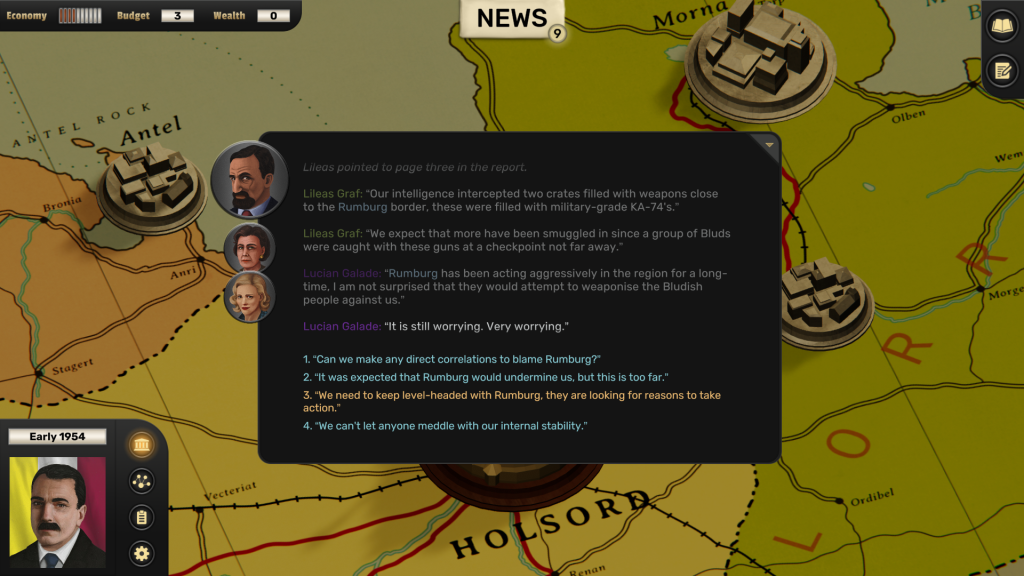 I’d like to open up with Suzerain’s Switch controls, as I believe they’re worth praising. Plenty of PC to console ports that have mouse-based input often stick with said input because it is believed that one should leave well enough alone; however, I feel like I speak for many gamers when I say that playing with a cursor on console is pretty painful. I loathed the idea of Suzerain falling prey to this mentality, so I was delighted to see that controls have indeed been reworked for the Switch. Instead of moving around a mouse cursor with a joystick, players can instantly move between points of interest using the left joystick; for a more free-reign approach, the right joystick moves players around the map at their leisure. Additionally, to toggle between menus, shoulder and trigger buttons are used instead of the dreaded console cursor, making Suzerain one of the rare menu-based games a joy to play on console.

Additionally, I spotted a few changes I hadn’t experienced the first time around on PC back at launch, such as the ability to customize Rayne’s appearance. While character customization is always fun, what Suzerain nailed about the feature is that things like hairstyle, facial hair, accessories, suit, and background can be altered to fit a certain stereotypical appearance of a political alignment. Want to play a capitalist pig? Wear a tux, fashionable haircut, and smoke a cigar. Feeling more Marxist? Style your moustache and goatee to complete the look. It’s fun to phenotypically look like your political approach, and it definitely helps with the immersion factor (or in the very least, helps you make certain choices). 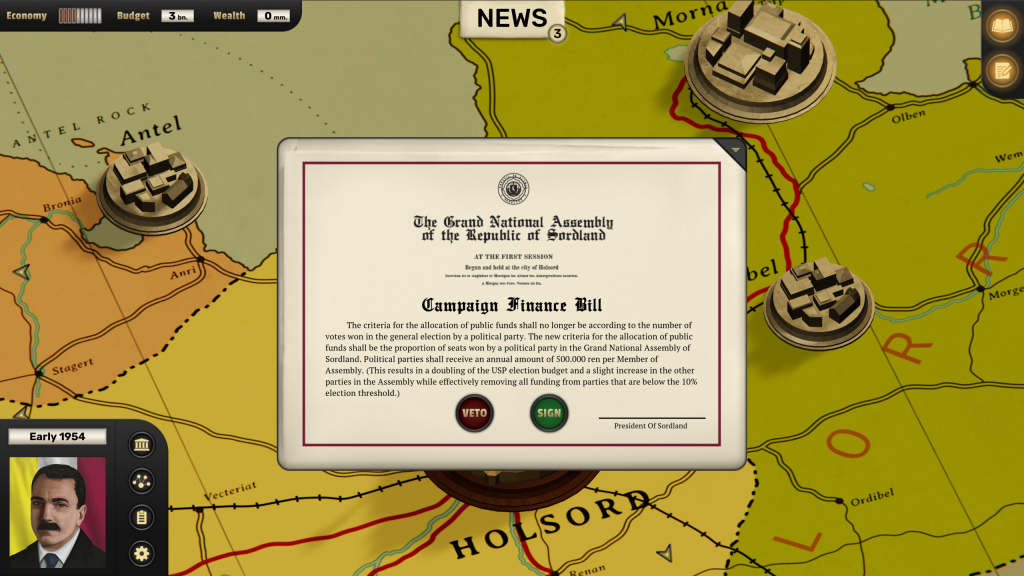 As for the presentation, everything about Suzerain is absolutely stellar. It’d be easy for a game all about deep politics to be difficult to grasp, but Suzerain writes everything out in a way that is very easy to understand. And although there’s a lot of history and culture specific to the game, it’s all easily digestible in the codex, which can be accessed at any time. Games with codices often run the risk of becoming a bit of an info dump, but Suzerain avoids this by not only allowing players to read information at their leisure, but also breaking it up in to specific sections, such as family members fitting under people, major cities fitting under places, etc. There’s even a handy guide to your cabinet and a political alignment chart for key players in your government. Without this cleanly presented information, it would have been much more difficult to keep track of all moving parts; it really does feel like the dev team thought of everything.

Suzerain’s narrative is a lot to take in at first, but becomes easily addicting as the years progress. You’ll have discussions with your cabinet about how to approach your goals, such as identifying key people you’d like to work with to push your agendas, important businessmen to either boost or keep under your thumb, and the balance of power to either maintain, soften, or strengthen between the branches of government. On paper, this sounds exceedingly complex, but after about an hour with the game it all clicks together. There isn’t really a point in time where I didn’t feel a lack of confidence in my comprehension of what was happening in Sordland — above all else, Suzerain made me feel like a capable and powerful leader. 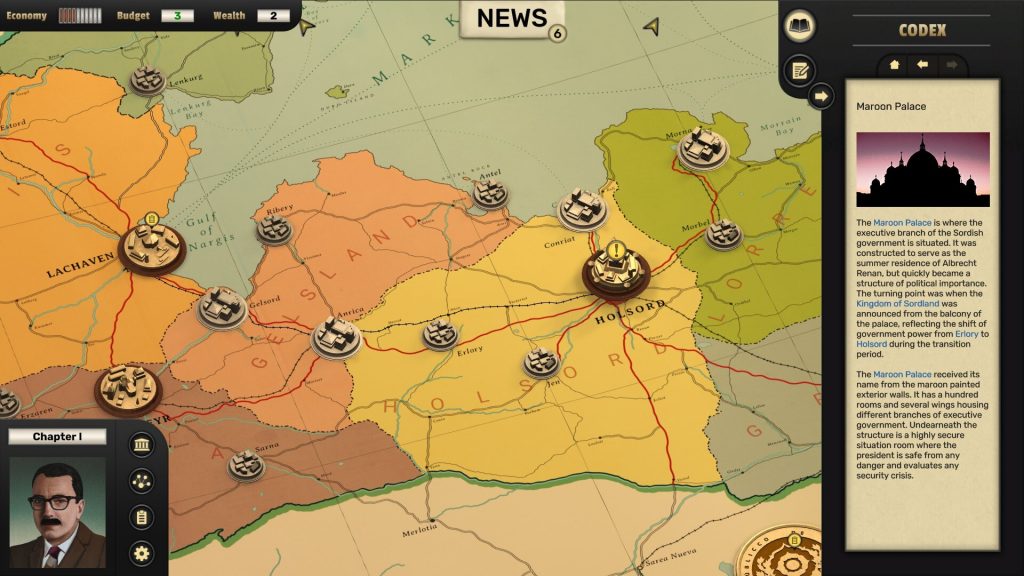 Although it’s abundantly clear Suzerain has implemented a slew of quality of life updates since I first played the PC version at launch, there are still a few teensy issues I wish had been ironed out. First, the text on the Switch is still a tad bit small. Now, it’s not miniscule, but the text is like a faded white against a slightly faded black screen, which, if playing in handheld mode, can give players a bit of eye strain after awhile. Additionally, I was hoping to see the budget, wealth, and happiness be better defined this time around. I’m still not sure how the people of Sordland expected me to work miracles on a budget of “3” over the course of four years, nor do I understand why they’re still mad at me after another run of being a perfect leader (Reformist Rayne). It’s not a deal-breaker, but I had hoped to see more clarity with those aspects.

Despite some minor issues, Suzerain is one of the best political games available, and one of the few (if only?) that measures a leader’s intent in addition to his actions. You can choose to accept allegiances enthusiastically or with doubts, and that will have an impact later on. You can spearhead women’s rights with purpose or completely on accident. You can choose to be cordial to those around you or a complete dick in public, private, or both. The fact that who you are as a person can affect your career path — leading to a second term, a comfortable retirement, or exile — is a logical yet often unexplored way to approach political games, and I deeply respect the developers for not only attempting this, but doing it right.

Suzerain is a must-play for fans of political games, narrative-based adventures, or for those who want to try an inventive concept executed brilliantly. It’s also a great case study in menu-based PC games and how to port them to console, the controls designed with Switch players in mind throughout every step of development. If you’ve ever thought you could make a country thrive under your rule, Suzerain is a great place to test out theories of any political leaning. Whether it be on PC or on Switch, Suzerain is worthy of your vote.

Editor’s note: This review is based on a retail copy of Suzerain provided by the publisher.