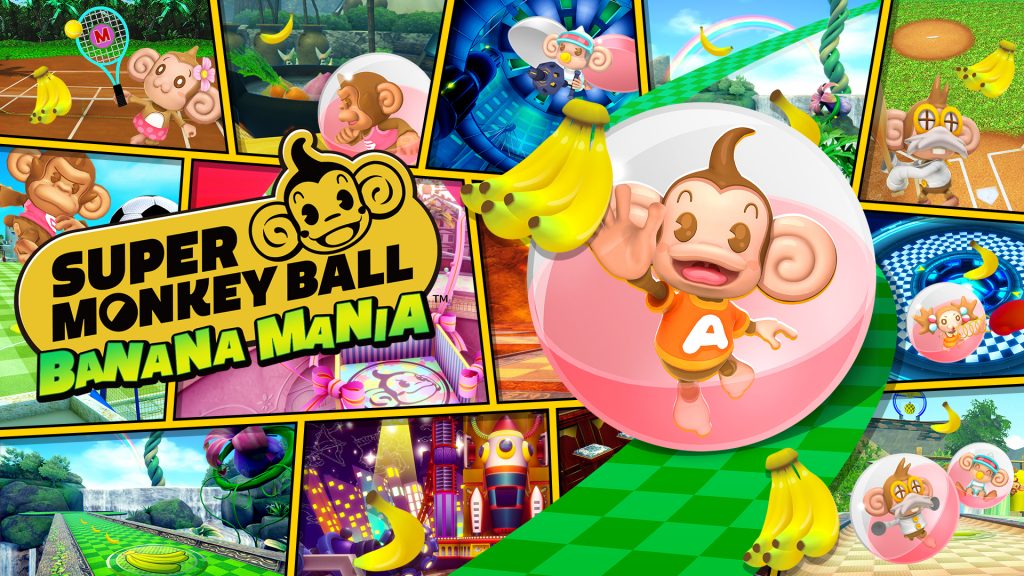 I don’t know about you, but I almost can’t believe it’s been two decades since Super Monkey Ball rolled into our hearts. Initially developed by Amusement Vision, the game made its debut in the arcades in the summer of 2001. However, it wasn’t until a few months later, when the pinballing primates found their way onto the Gamecube, that its popularity exploded.

Now, 20 years later, the series has seen several sequels across many platforms. Even Nokia N-Gage users (all two of them!) got to join in on the fun in 2003 with a port of Super Monkey Ball.  Of course, not every entry in its long-rolling history has been the ripest banana in the bunch. But the fact that there’s been a sequel or port for nearly every year since its inception is a clear testament to the series’ impressive staying power. 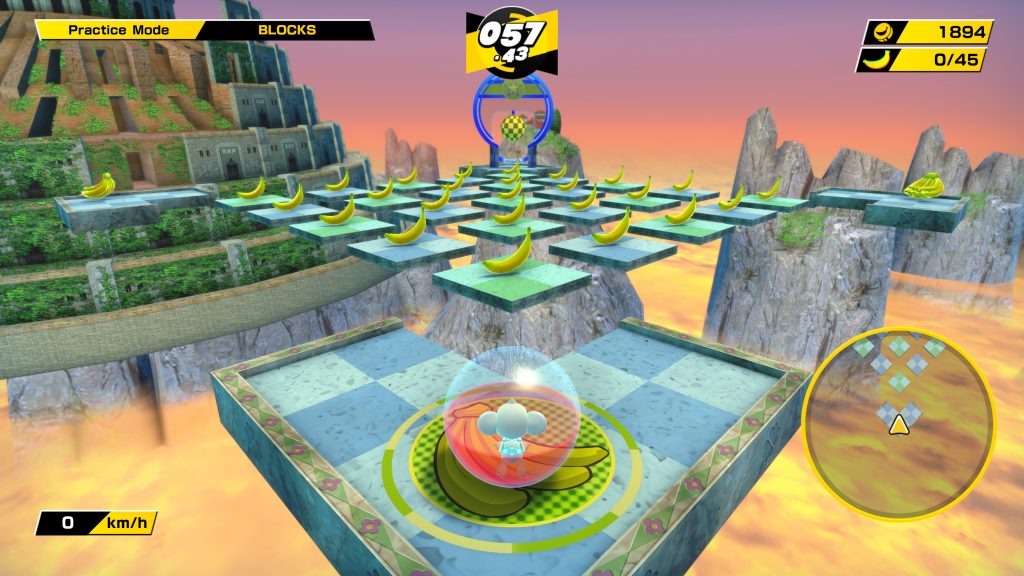 If you’ve somehow never played a Super Monkey Ball game before, here’s the rundown. Your objective is to guide a monkey trapped in a bouncy rubber ball to the stage’s exit. But there’s a catch: you don’t control your monkey directly. Instead, you’ll use the left analog stick to tilt the entire stage, which will cause the ball to roll across the environment.

Sounds simple enough, right? Well, not exactly. Each stage is teeming with hazards and other pitfalls designed to send you hurtling into the abyss below the map. And if you fall or time runs out, you’ll have to start the course over from the very beginning. At first, the difficulty isn’t so bad. The beginning courses are deceptively easy, lulling you into a false sense of security. Then, before you know it, you’re confronted with labyrinthine gauntlets where you’ll have to navigate moving platforms, ride paper-thin rails while avoiding whirring engines, falling boulders, and all sorts of other hazards as you tumble to the goal. It’s kind of bananas.

No matter how well you’re doing, chances are you’re going to hit a roadblock at some point. Some stage designs are downright diabolical, and completing them can require just as much luck as skill. Thankfully, Super Monkey Ball Banana Mania allows you to spend the points you acquire when you finish stages and mini-games to skip these courses. Does it feel cheap? Sure, just a little bit. But after spending an hour toiling on one challenge, I promise you’ll be glad the feature is there, too. 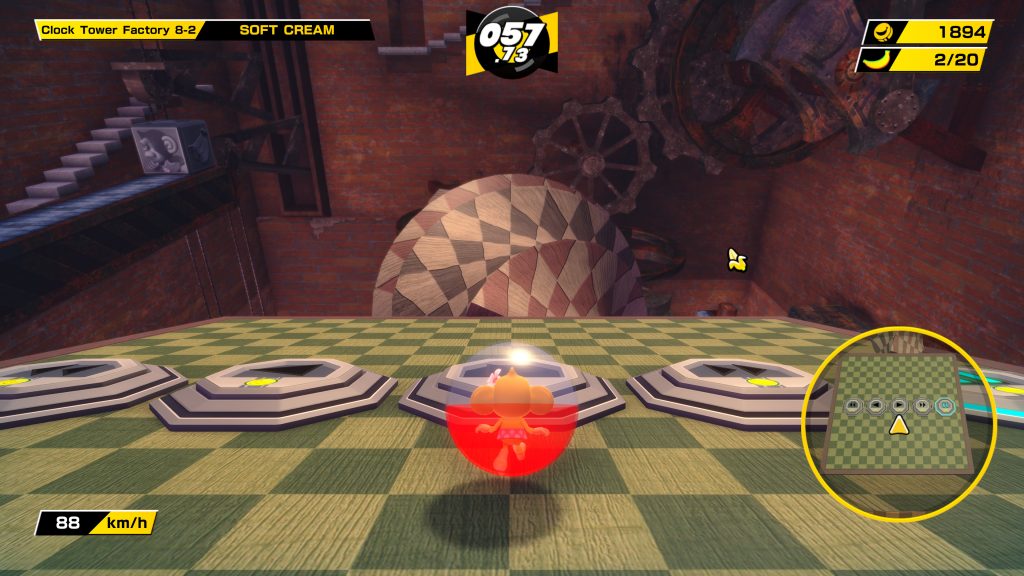 Upon booting up Super Monkey Ball Banana Mania, it’s hard not to be overwhelmed by the various game modes available. The main game allows you to choose from AiAi, Doctor, MeeMee, Baby, and the rest of the series’ colorful cast of characters. After that, it’s off to choose your game mode and get rolling.

Story Mode is essentially the heart of the package. It’s essentially a remastered version of 2005’s Super Monkey Ball Deluxe. Doctor Bad-Boon is up to no good, and you’ll have to foil his evil plans. To do so, you’ll have to make your way through 100 challenging courses, collect billions of bananas, and die many, many, many times in the process.

Each chapter kicks off with a brief animated cutscene to set the stage for the new area. Of course, they’re silly and would look right at home in a children’s show, but that’s no big deal. After all, nobody is playing Super Monkey Ball for the story; it’s all about the challenging gameplay. And that’s what Super Monkey Ball Banana Mania delivers in spades. At first, the stages are straightforward enough. But before you know it, they begin to resemble sadistic, Rube Goldberg-esque machines designed to chew you up and spit you out.

The main game also includes a challenge mode featuring every level from Super Monkey Ball and Super Monkey Ball 2. I’ve always preferred the original two releases over Super Monkey Ball Deluxe because they feature a more natural difficulty curve and more interesting stage designs. However, it is worth noting that some stages get recycled throughout all three games – albeit with a fresh coat of paint. Still, revisiting these Gamecube classics was undoubtedly my favorite part of Super Monkey Ball Banana Mania‘s package. 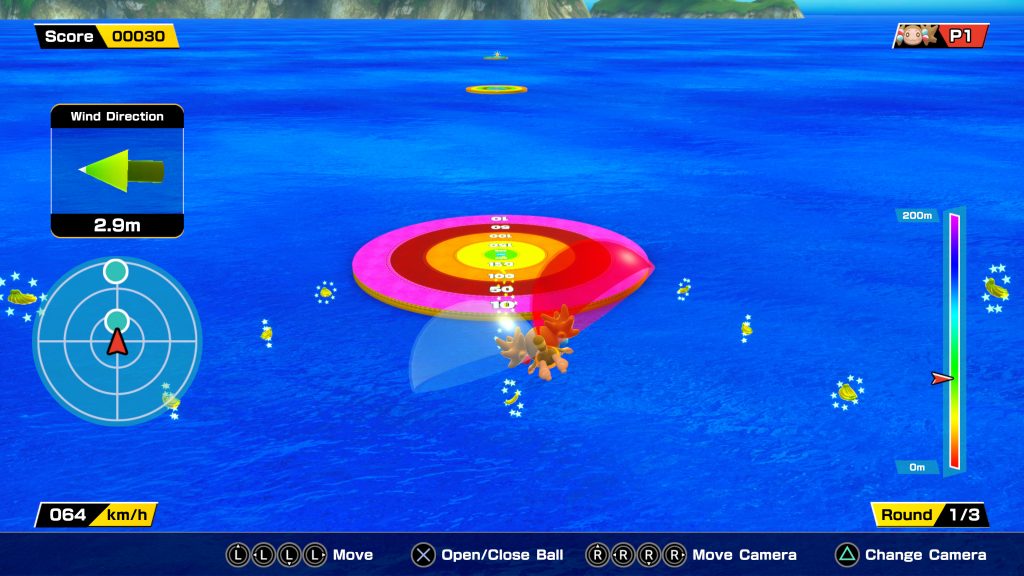 The Super Monkey Ball series has always been known for its over-the-top mini-games, and Super Monkey Ball Banana Mania is no exception. The game features 12 party games for up to four players to enjoy, including:

As you’d expect, they’re just as addicting as ever. Whether you’re barreling towards the finish line in Monkey Race or playing a casual game of Monkey Billiards or Monkey Golf over beers with friends, it’s easy to lose watch the hours slip away with these bite-sized distractions. Unfortunately, however, not every mini-game is a hit. For example, the punch-drunk Monkey Fight was too chaotic to hold my attention for too long. And While Monkey Boat has a fun idea going on with its kart racer-style mechanics, the stage designs just aren’t very engaging.

Still, when you consider just how entertaining the majority of the party games are, it’s easy to ignore the few rotten bananas in the bunch. Monkey Target and Monkey Baseball are exceptionally addicting, so clear your calendar before firing those up. 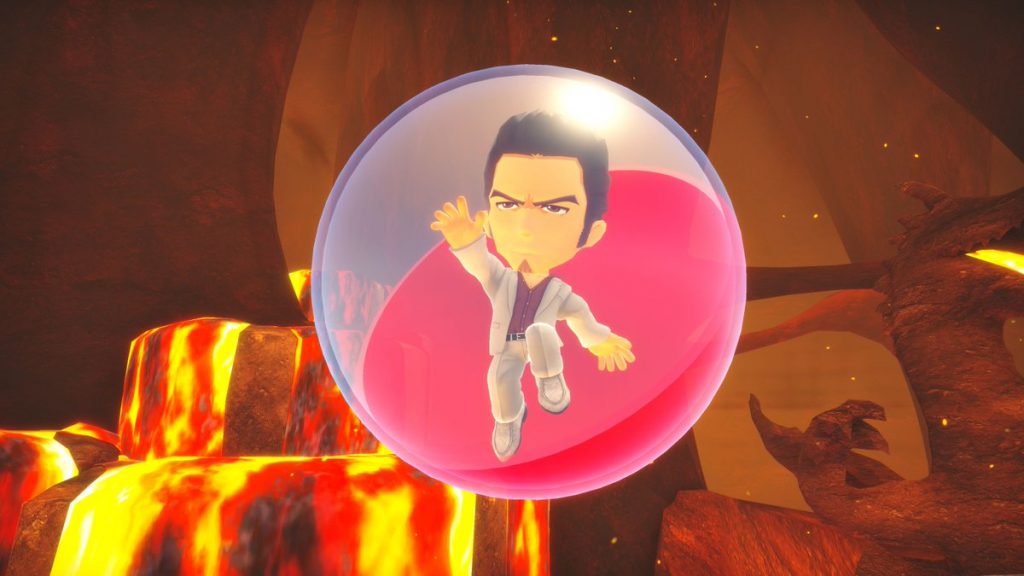 The more stages and challenges you complete, the more points you’ll earn. More than mere bragging rights, these act as the currency you can spend at the Point Shop. In the shop, you can spend your hard-earned cash on accessories to customize your monkey’s head, body, and legs. Or even dec out your ball with a variety of different designs. This is fun and gives you plenty of freedom to turn your simple simian into a star.

Speaking of stars, you can also unlock several iconic Sega characters in the shop, including Beat from Jet Set Radio, Kiryu from RGG’s Yakuza series, along with Sonic and Tails. These new characters come complete with their own collectibles that replace the bananas that usually litter every stage. Sonic and Tails collect rings, of course. While Kiryu snatches up bottles of Staminan X and Beat gathers cans of spray paint. These new characters are nothing groundbreaking, but they’re a welcome bonus that any Sega fans should appreciate.

In addition to cosmetic stuff, you can even purchase brand-new game modes from the shop, such as the Golden Banana mode, which, once beaten, allows you to unlock Golden AiAi, and the Dark Banana Mode that adds lethal bananas that you’ll need to avoid to each stage. Add to that a wealth of filters and frames for the photo mode, and you have plenty to spend your shiny banana bucks on.

Did I mention how Super Monkey Ball Banana Mania was loaded with content? Cool, just making sure. 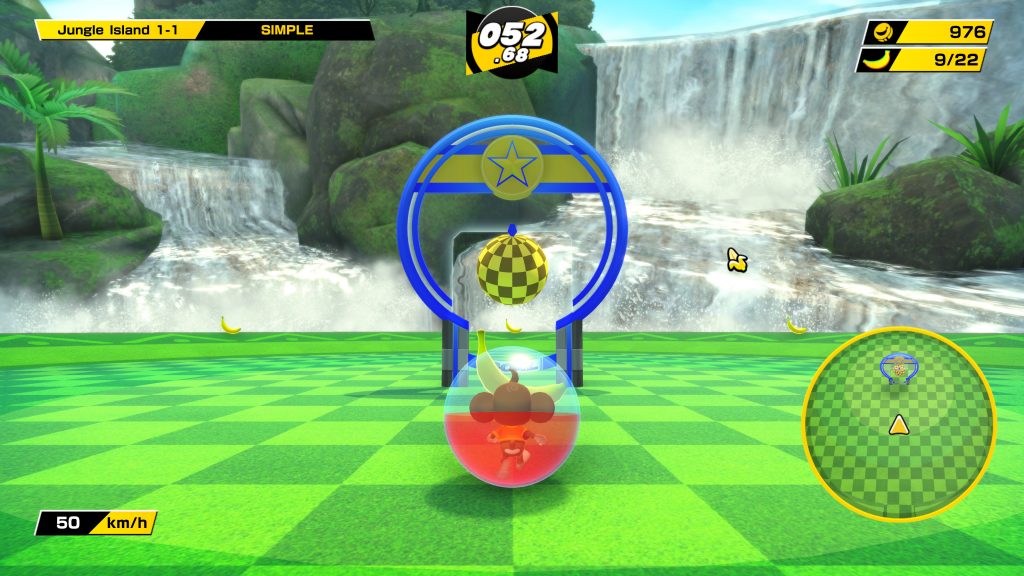 With so much content crammed into this package, you probably think Super Monkey Ball Banana Mania is about as good as it gets for fans of the series. But don’t go selling off your dusty old discs just yet. While there’s undoubtedly much to celebrate in this collection, there are a few areas where it falls short.

For starters, something about the controls and ball physics seems a bit off in Super Monkey Ball Banana Mania. That’s not to say the game is unplayable by any means. However, if you’re used to the way maneuvering your chimp feels in previous games, you’re going to need to take some time to come to grips with this entry before things start to click. Even after spending many hours with the game for review, I’m not sure I ever truly felt comfortable with them. It’s as if they alternate between being overly twitchy on some courses while stiff and unresponsive on others. But, again, you eventually start to get somewhat used to it. But if you’re diving in straight after playing Super Monkey Ball, Super Monkey Ball 2, or Super Monkey Ball Deluxe, you’re going to notice the difference.

The physics issues extend beyond wrangling your orangutan. From being bonked straight through the bottom of a map by an obstacle or soaring into the abyss after being barely nudged by something in the environment, things get pretty screwy on occasion. Still, moments like this can be rather amusing at times. And considering the game doesn’t exactly punish you for failure, it’s not too frustrating when situations like this occur.

While not without its share of issues, you can’t say Super Monkey Ball Banana Mania doesn’t give you your money’s worth. With 300 stages to master and a wealth of modes and mini-games to enjoy, there’s more than enough monkey business on this disc to keep you rolling for weeks on end. However, if you never cared for the series before, then this collection probably isn’t going to win you over.

Super Monkey Ball Banana Mania is a vibrant celebration of the series’ history that will test both your skills and your patience. But if you’re up for the challenge, don’t hesitate to add this to your PS5 library. 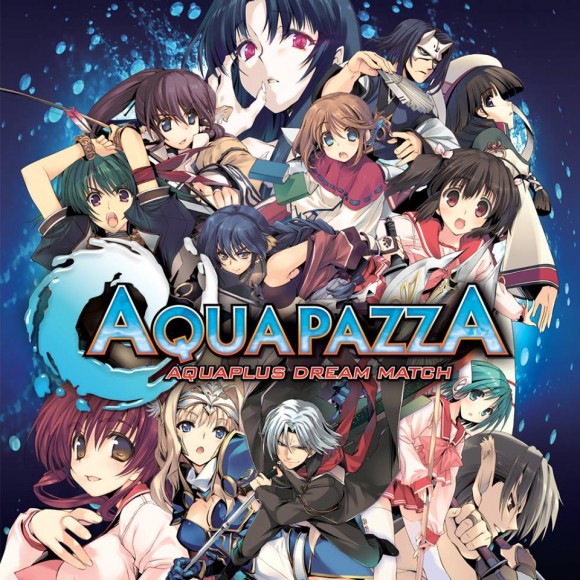 AquaPazza Review- A Potent Potion   Get ready, fighting fans, AquaPazza has finally found its way to North America courtesy of Atlus. This over the top mashup of developer…