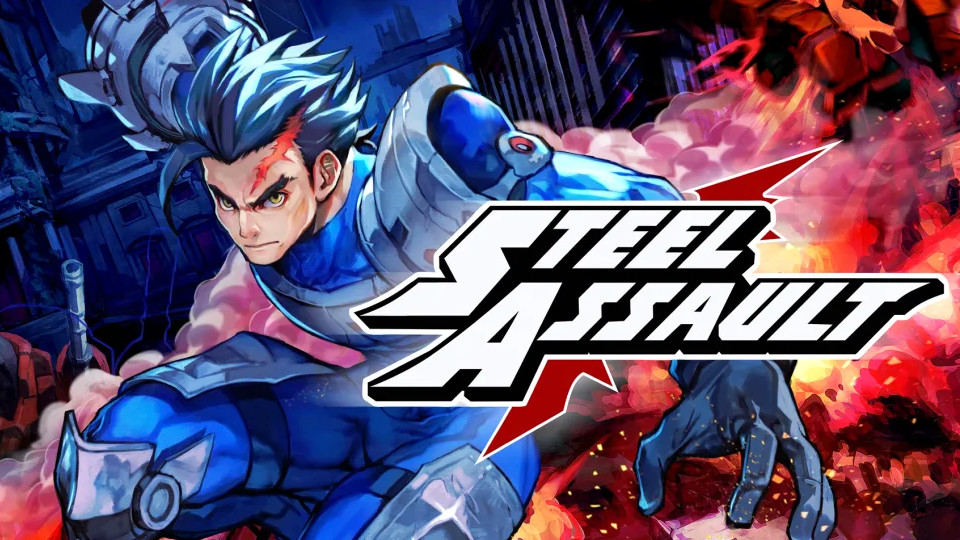 Steel Assault is a game I’ve been intrigued by since I demoed it. Developed by Zenovia Interactive, it’s a raging, non-stop ride through 5 action-packed stages. It features a captivating visual style, hard-yet-satisfying gameplay, and an interesting story. The question is, was this a title that will only appeal to fans of arcade games? Or does Steel Assault provide a worthy experience for any gamer? 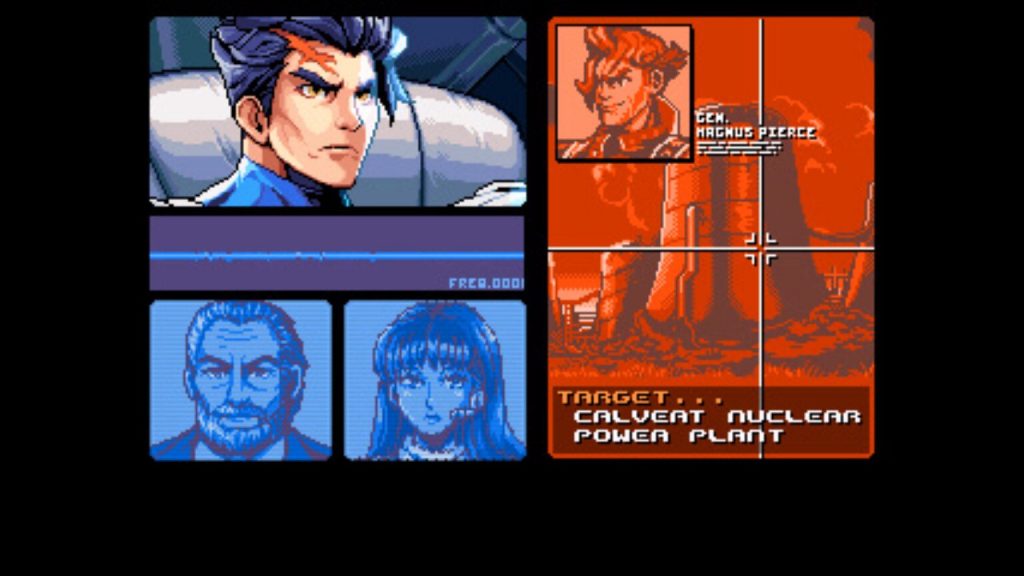 Though Steel Assault isn’t big on backstory, from the opening cutscenes, it’s clear it takes place in an America in ruins. Not only is the setting post-apocalyptic, but it’s also pretty much post-democracy, which feels a bit more relevant given the state of our world these days. Regardless, you can tell from the beginning that our hero, Taro Takahashi, has been figuratively and literally scarred by this war-torn world. It’s all thanks to the actions of maniacal General Magnus Pierce, who not only rules over the ashes, but is dead set on making things worse. It’s up to Taro and his support team to put a stop to his machinations before everything spirals completely out of control. 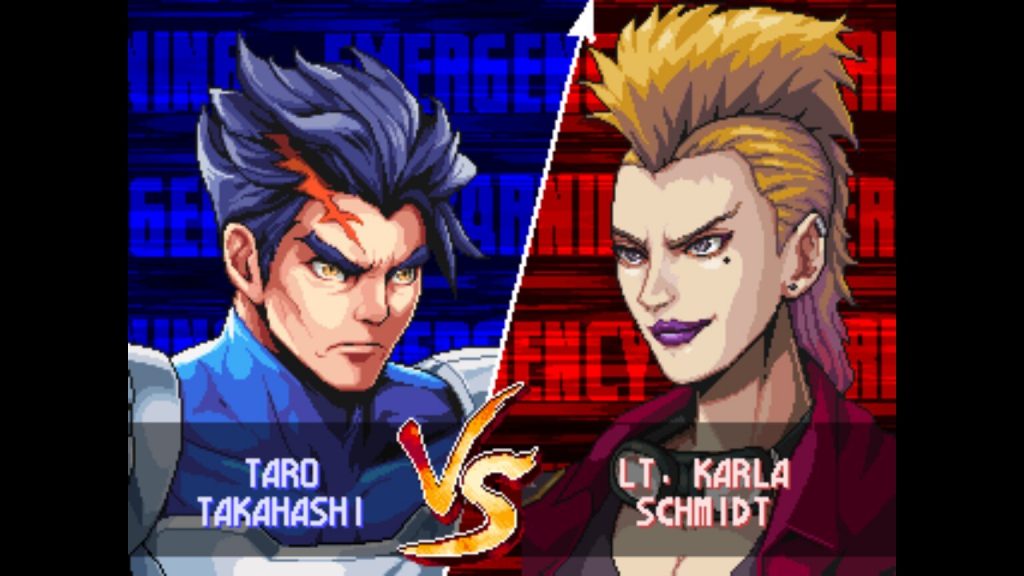 Every boss has style to spare.

America may be in ruins, but that doesn’t mean there’s no technology around. Far from it, in fact. General Magnus has a whole fleet of mechanized mayhem at his disposal, including mechs, goons in flying suits, floating drones, and much more. From the very beginning, it’s clear Taro has his work cut out for him. Moments into the game, his jet is shot down, and he has to crash land. And it only gets crazier from there. Luckily, Taro has some fantastic tools to help him survive. 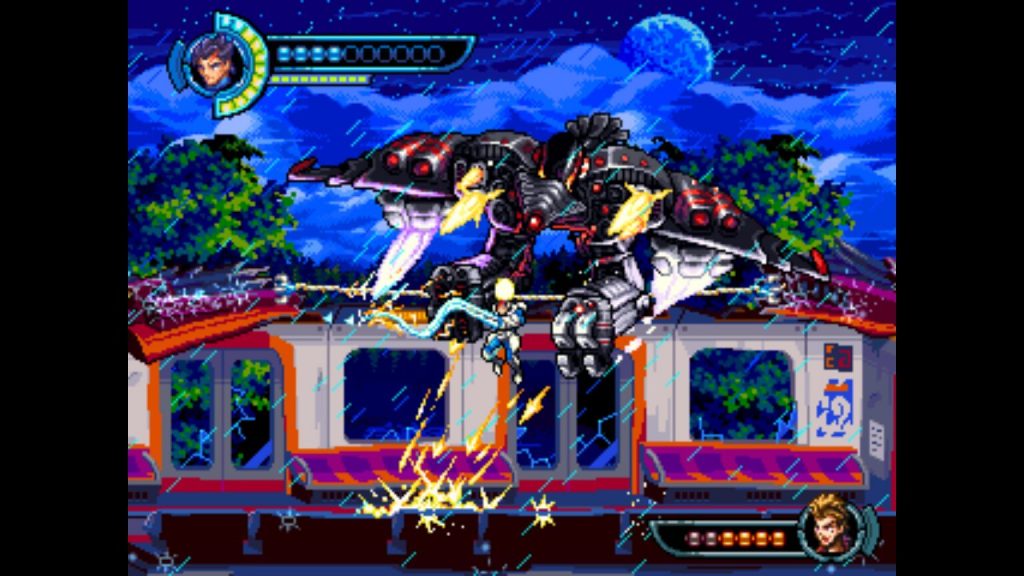 Your primary tool is a whip attack. You’ll automatically use it when distant from foes, and you can fling it in pretty much any direction. Just remember that to whip downwards, you’ll have to do a short jump first. When you’re up close and personal, Taro uses a brutal punch instead. Not only is this a useful weapon for playing keep away, but it can also dispel most bullets. So long as they aren’t glowing red and blue, you can smack them away. Taro also has the capability to double jump and do a short slide. The slide is actually the only way to dodge bullets, lasers, and flames coming from every angle, so mastery of it is a must. 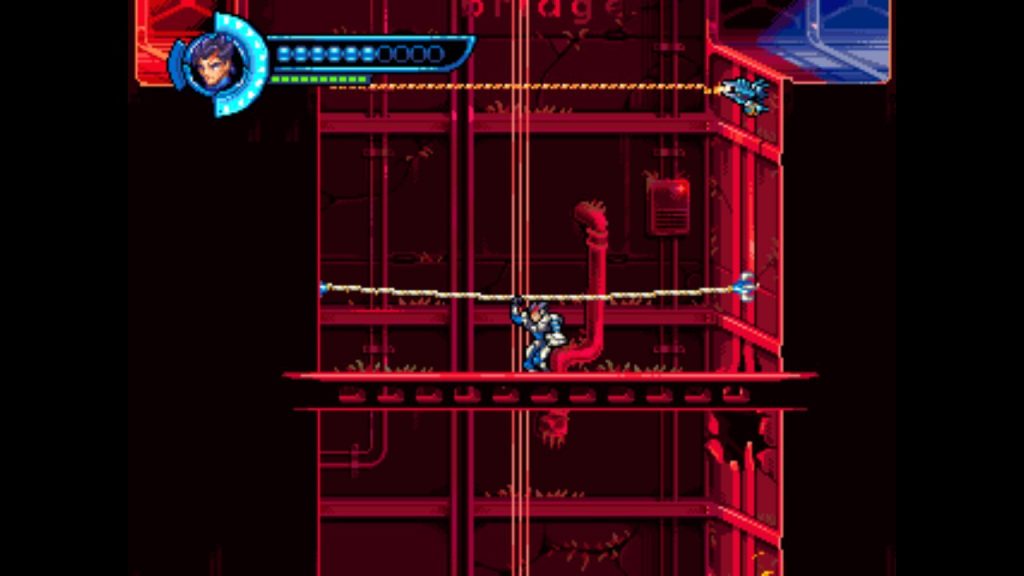 The other essential tool is Taro’s zipline. You can use this to reach distant platforms with ease, and leaping from it launches him vertically. There’s just one proviso – you need two points to connect the zipline to before it’s stable and able to be climbed. On the plus side, you can launch the zipline vertically, horizontally, or diagonally. Just make sure you place it properly. Otherwise, Taro might fall to his death, which happened to me a handful of times in my time with the game.

Walking Through the Wreckage 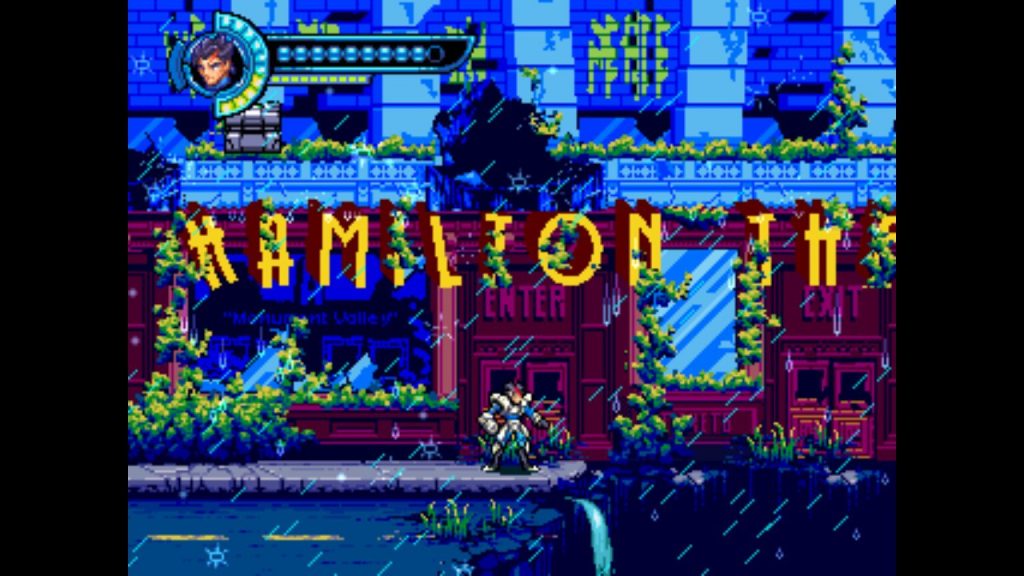 Though there are only five stages in the game, they’re all long and full of arcade mayhem. Each is also comprised of multiple sections. The handy thing is, you have unlimited continues. Plus, when you reach a new area on easy or normal, you’ll recover all your health. But that’s pretty much the only helping hand the game will provide, other than the occasional power-up. These consist of either an electric whip upgrade, a shield, or a health refill. They’re all pretty minor, and most only last a short period of time. So you’ll really need to master and memorize the levels to have a chance to survive because Steel Assault is not an easy game, on any difficulty. 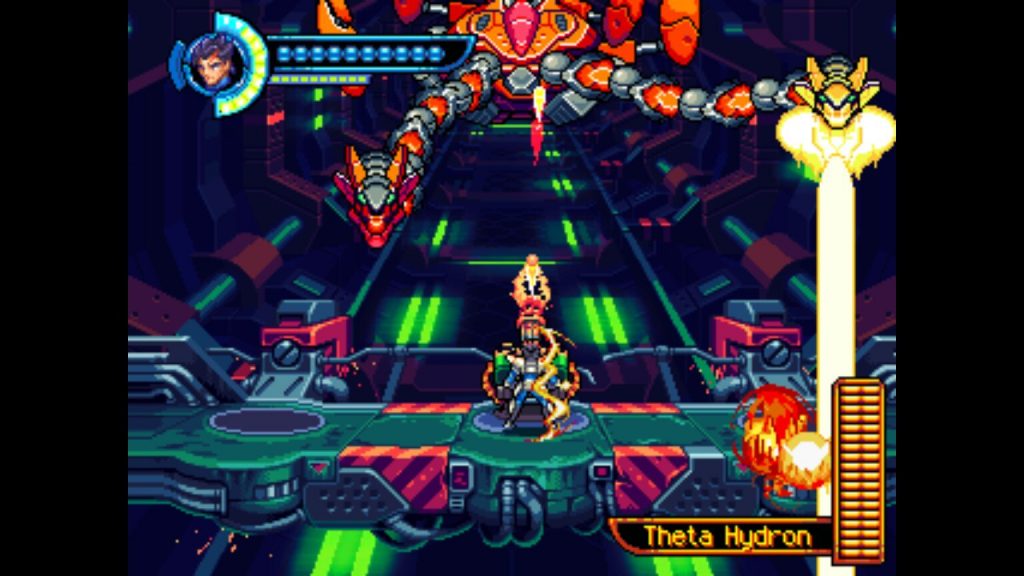 From the get-go, you’ll have foes raging to rip you to shreds. They’ll come from all angles, and many can fly. Your best bet is to deflect bullets, move quickly and pay attention to your surroundings. Precision is a must, and the game can be cruel at times. This is especially true when you have to make a leap of faith right into the sights of a gun trained on you. The highlights of any stage are the mini-bosses and boss fights. Mini-bosses can sometimes just be groups of foes you have to defeat. Other times they’ll be hardcore mechanical monstrosities. Either way, they aren’t child’s play. Oh, and on rare occasions, you’ll be riding some vehicle to mix things up.

You’re Not the Boss of Me! 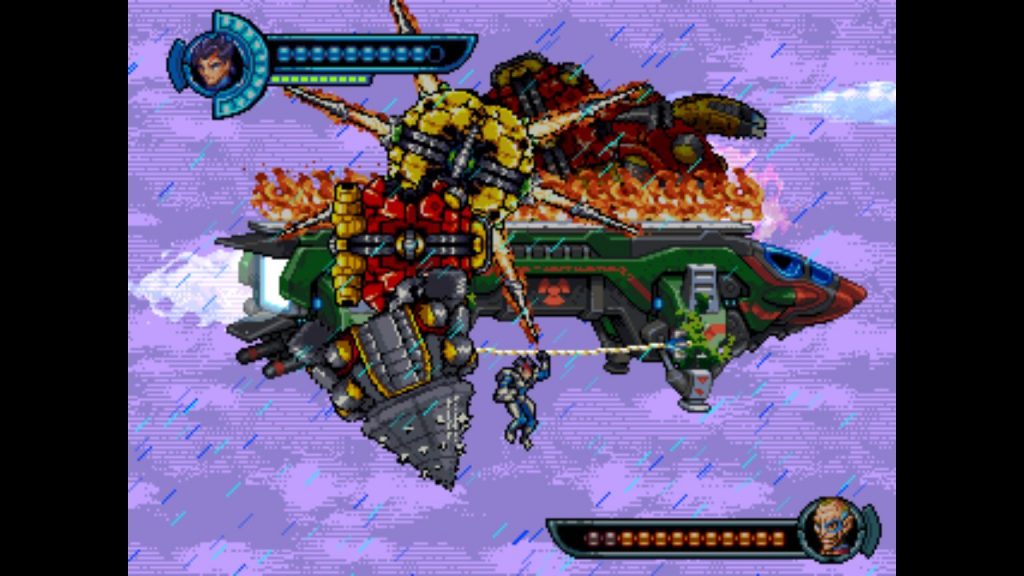 I loved the bosses in Steel Assault. Not only are they all larger than life and dynamic, but they all fight completely differently. From flying machines that gun you down and electrify the floor to gyrating drill worms and even some deadly wonder twins, they’ll all make you earn every victory. And keep in mind, there are no helpful health refills during boss fights. By contrast, each boss has a huge health meter that you’ll have to chip away at. So just bunker down and get ready to fail a few times as you learn their devious patterns. And for those that like a challenge, bosses only get harder on the steeper difficulties, some even learning new attacks.

While it’s true there’s an Arcade mode in the game, I wasn’t that excited by it. Playing it is almost identical to playing on expert difficulty. This means you don’t recover all your health in new sections, and that dying forces you to restart from the very beginning. I honestly wasn’t able to get that far in that mode and was hoping it offered something new to the standard format. As an old-school gamer, I always hope for extra content that has to be worked towards. But in my experience, the game is pretty much the same no matter what difficulty or mode you play it on. They just ramp up the difficulty but don’t add new bosses or stages. That said, I do appreciate how Steel Assault changed from the earlier demo, and now offers multiple difficulties instead of just Arcade and normal. 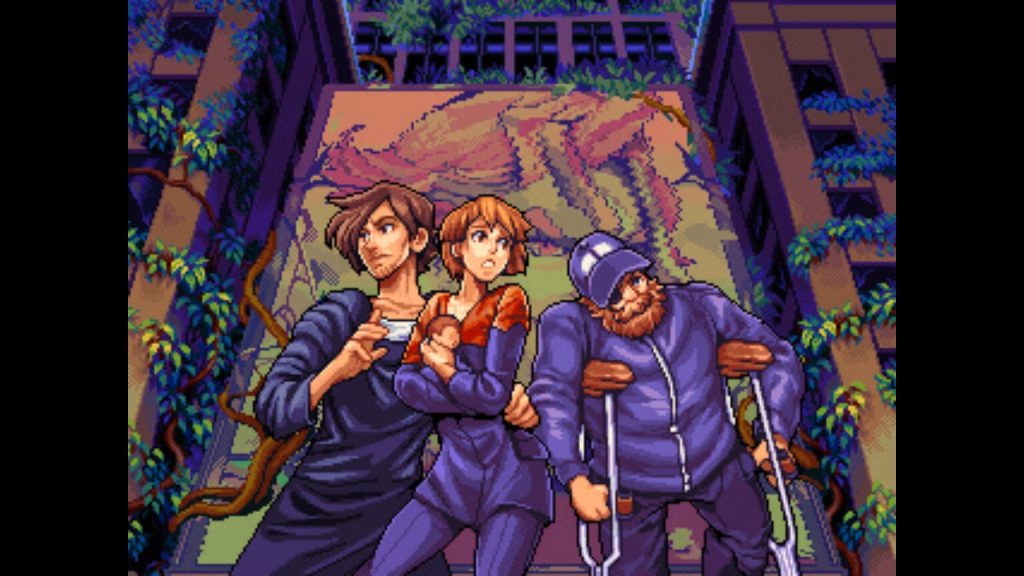 Visually, Steel Assault is absolutely gorgeous. It’s a wonderful tribute to the 16-bit games of yore. There’s so much detail you’ll never get bored by what’s on screen. There’s a ton of diversity of enemies, and each boss and mini-boss is a work of art. The sprite work is so amazing I wonder why we ever left this era of gaming. Musically, it’s bombastic, supercharged and very easy to get lost in. There aren’t any real lyrics, but the punchy and energetic rhythm will keep you playing until the end.

Watch Out for Acid Pits 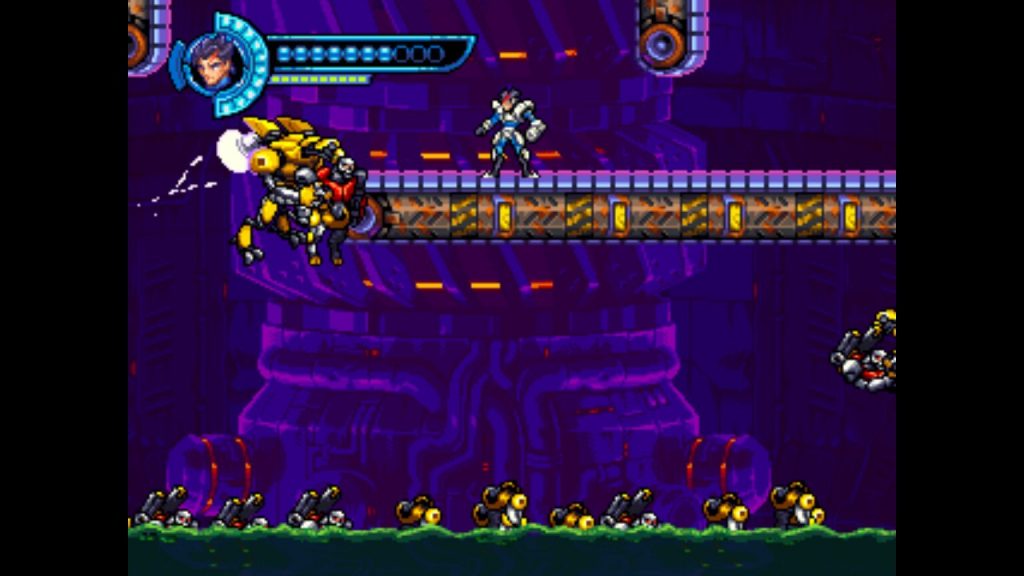 While I loved a lot about the game, there’s a couple of things that held it back from the higher score I would have loved to give it. One small nitpick is that the game is incredibly short. Both times I beat it, I managed to do so in less than an hour. And while I hardly lacked for things to do in that time, I found myself wishing there was a bit more meat on the proverbial bone. While the Steam achievements definitely help, I got more than half in my short couple hours with the game. 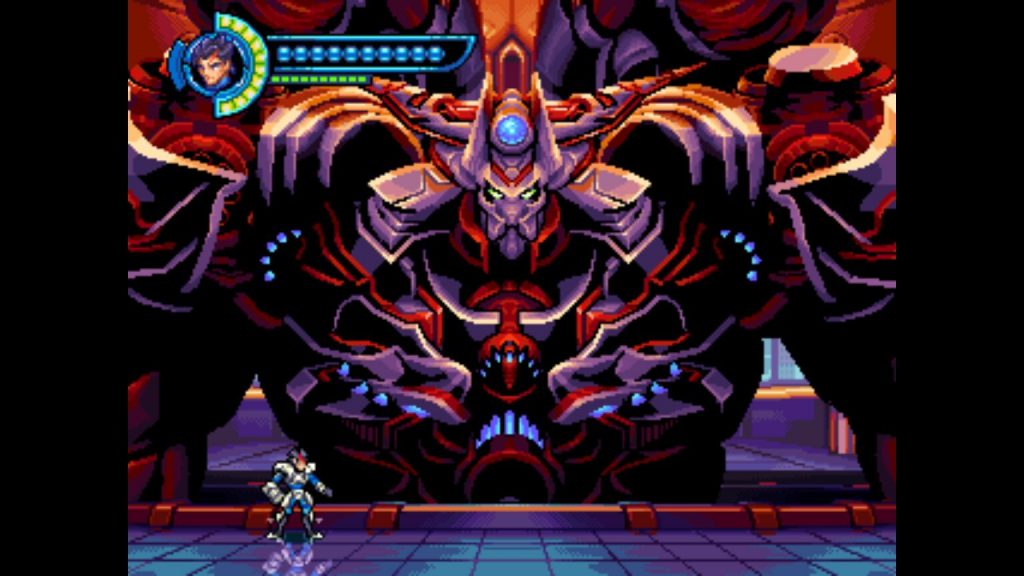 The more pressing issue is that the control layout doesn’t actually match the Xbox gamepad. I paused to look when I started the game, and quickly found things didn’t play like the pause screen implied. I only got the hang of things by playing around with the tutorial, but that’s not an issue you want to run into in a game this fast-paced.

Zipline to the Future

In many ways, Steel Assault is the best current example of a true arcade-style experience I’ve played. It’s full of action, style and is challenging enough for fans old and new. It even made me fondly recall games like Contra Hard Corps and Blazing Chrome. My biggest quibble with the game is that it’s shockingly short, which makes the price tag a bit hard to justify. That said, any fan of arcade games and the 16-bit era owes it to themselves to check this out. I’m pleased by this first outing by Zenovia Interactive, and hope their next title is just bigger and better. Especially since the ending sets up a Steel Assault sequel so very well!