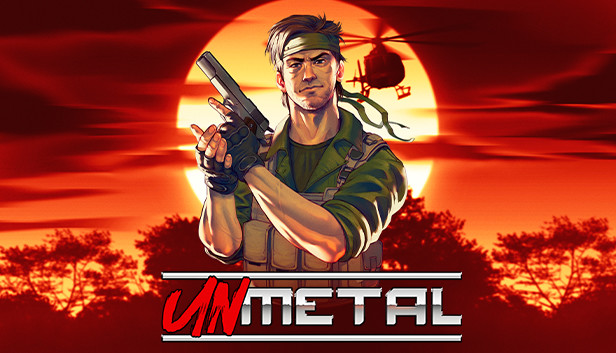 Konami’s Metal Gear franchise has always held a special place in my camo-clad heart. As a kid growing up in the late ’80s, I must’ve spent hundreds of hours on my mission to infiltrate Outer Heaven as FOXHOUND member Solid Snake. Though looking back, despite my blood, sweat, and probably a few holes in my drywall from rogue controllers lobbed like Soviet ICBMs across my bedroom, I don’t think I ever managed to make it to the end and destroy that damned nuclear-armed bipedal battle tank. Still, win or lose, an obsession was born all the same. I remember sitting in my room blaring that fantastic password screen music like a weirdo. Or, stranger still, actually enjoying the now widely-panned NES follow-up Snake’s Revenge. It was nothing short of an addiction; If there were mercenaries that needed to be stealthily punched in the face, I was your guy.

Developed by Fran Téllez de Meneses and published by Versus Evil, UnMetal is a tongue-in-cheek take on those Metal Gear titles of the 8-bit era. It features the same top-down perspective and rigid stealth mechanics of the games from which it takes its inspiration. However, it adds a healthy dose of lowbrow humor to go along with the high-stakes action. The result is a game that should be instantly familiar to fans of Kojima’s long-running espionage series while giving players who’ve been starving for a new entry in the dormant franchise something to laugh about. 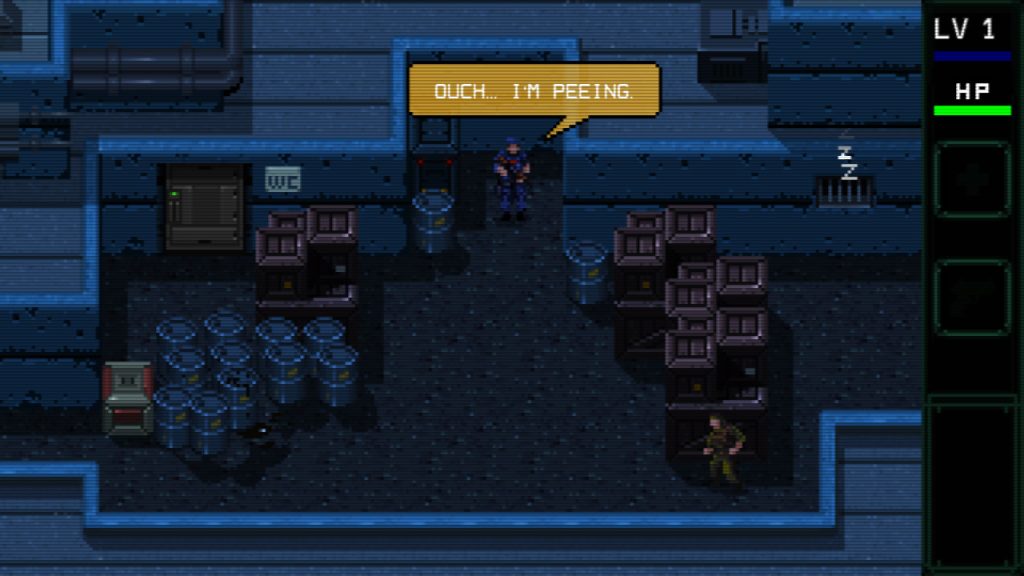 In UnMetal, players control Jesse Fox, a gravelly-voiced commando imprisoned for a crime he didn’t commit. Your objective is to escape a sprawling military complex and make your way back home. But, of course, this is easier said than done. With heavily-armed troops posted around every corner and the base’s defenses on high alert, you’ll need to stick to the shadows and use your wits if you want to escape the facility and maybe even save the world in the process.

If you’ve ever played any NES or MSX Metal Gear games, you’ll feel right at home with UnMetal. You’ll sneak through installations teeming with guards, avoid detection from cameras, and amass a vast arsenal of weapons and gadgets to overcome obstacles and progress to the next area. Many of these items are lifted straight out of Metal Gear, such as the Mine Detector that allows you to spot explosives invisible to the naked eye or binoculars that you can use to see what’s going on on adjacent areas of the map. Other items, however, are more unique and are often used to solve puzzles in adventure game fashion. I’d go into more detail about these situations, of course, but that’d risk spoiling the fun.

But despite the adventure game undertones, UnMetal is, first and foremost, a stealth game. If you’re spotted, an alarm will sound, and reinforcements will flood the area. That said, you’ll want to take the slow and steady approach and sneakily dispatch guards whenever you can or avoid combat altogether. Because once the alarm goes off, dozens of enemies will come charging in guns blazing. When this happens, a trip to the game over screen is all but guaranteed. So tread lightly, my friends.

You Can’t Kill The Metal 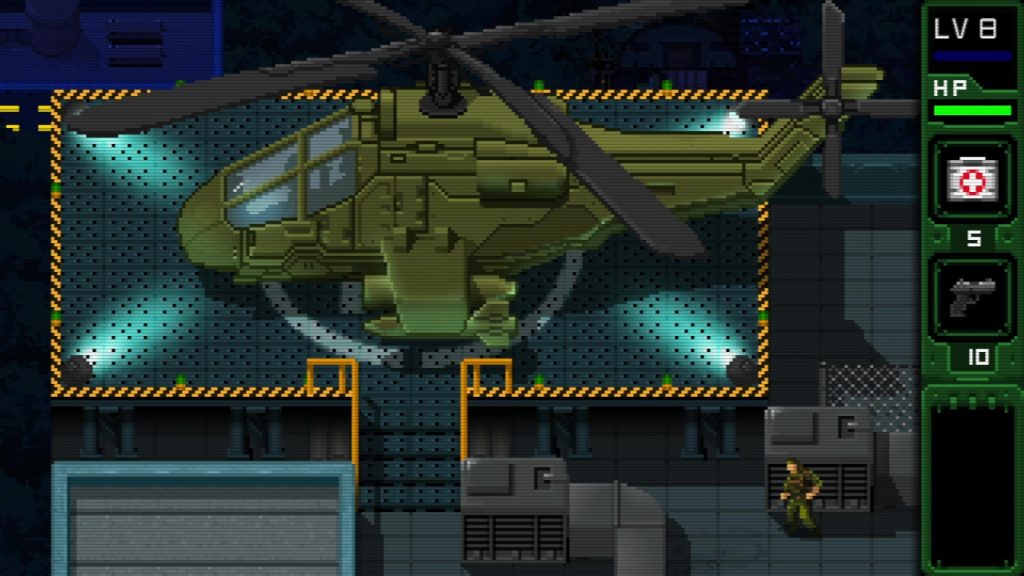 Again, this should all sound very familiar to Metal Gear veterans. However, that’s not to say UnMetal’s stuck in the past. On the contrary, the game features many elements from modern stealth titles to keep the moment-to-moment gameplay more engaging. For example, you can pick up and move guards’ bodies to hide them from their patrolling comrades. Or, if you’re feeling greedy, rummage through their pockets for bonus supplies such as ammo or health kits.

These more modern features don’t just help you; they can also harm you as well. For example, being shot will cause you to bleed out slowly. So you’ll need to bandage yourself up with rags or a health kit, which can be tough to do in the middle of a firefight with one of the game’s fearsome bosses. There’s even an RPG-lite leveling feature. As you take down your enemies undetected, you’ll gain experience. And once you level up, you’ll be able to choose new perks like taking more damage, carrying more ammo, or slowly regenerating health.

Overall, I think integrating these more modern elements into UnMetal‘s old-school framework was the right move. They feel totally natural and really add to the experience. The entire time I was playing UnMetal for this review, I couldn’t help but imagine how amazing it would be to see these features added to a remake of Metal Gear or Metal Gear 2: Solid Snake – a testament to UnMetal being much more than just a quick and dirty parody of those games. It’s clear from the jump that this is a labor of love, created by a studio with a real passion for the series despite the game’s unserious tone.

More Mixed Up Than Psycho Mantis 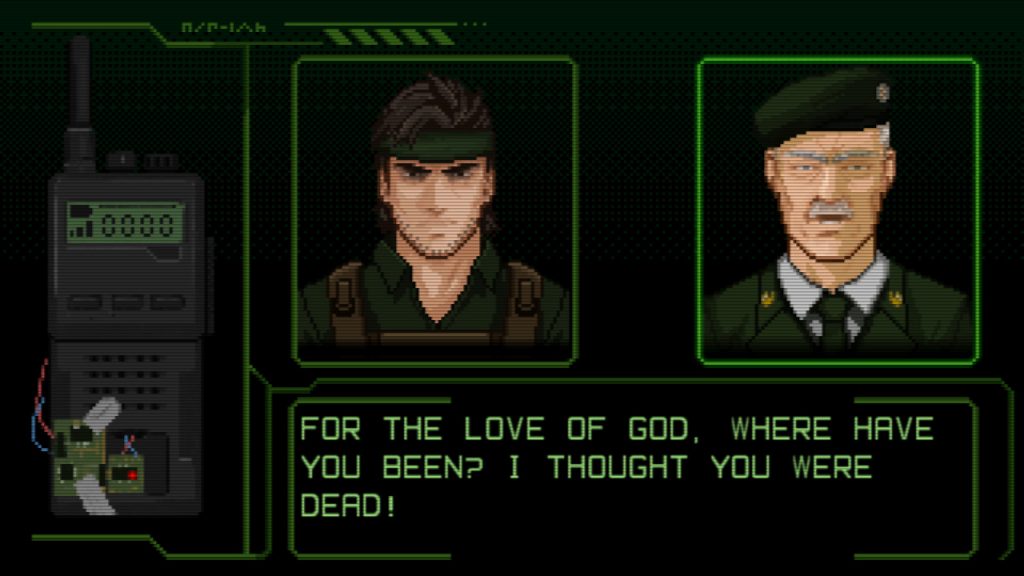 Don’t worry. You won’t have to worry about any famous purple stuffed worms in flap-jaw space in UnMetal.

While UnMetal‘s stealth gameplay is undoubtedly solid, it’s the writing that steals the show.  Throughout my 13-hour playthrough, I frequently found myself doubled over in laughter at the ridiculousness of it all. From long-running gags like every single NPC soldier being named “Mike” due to the protagonist’s spotty recollection of events (the entire story unfolds through an interrogation following the events of the game) to the hilarious banter between the guards that parol the base, there were moments that literally left me in tears and gasping for breath as if I were infected with FOXDIE.

UnMetal‘s protagonist Jesse Fox has an overactive imagination, to say the least. This quirk of his leads to some brilliant moments where you’ll get to choose how he recalls the events of a particular scene. One scenario resulted in thousands of sheep appearing out of thin air, which slowed my escape during a timed sequence. Another had me decide whether the new type of guards were Scandanavians or exterminators. Not wanting to deal with an army of 6-foot-tall Vikings with AKs, I chose exterminators. It turns out Fox meant ex-Terminators. As in, the emotionless killing machines James Cameron has been warning us about for the better part of four decades. Needless to say, I went back and chose the Vikings, who, while light sleepers, can be restrained just as easily as your average cannon fodder grunt so long as you have the right materials.

I genuinely loved these scenarios. And while their impact isn’t far-reaching, they do impact the game’s difficulty at times and can up the challenge for seasoned players. I’m already eager to start another playthrough just to see how they all play out. 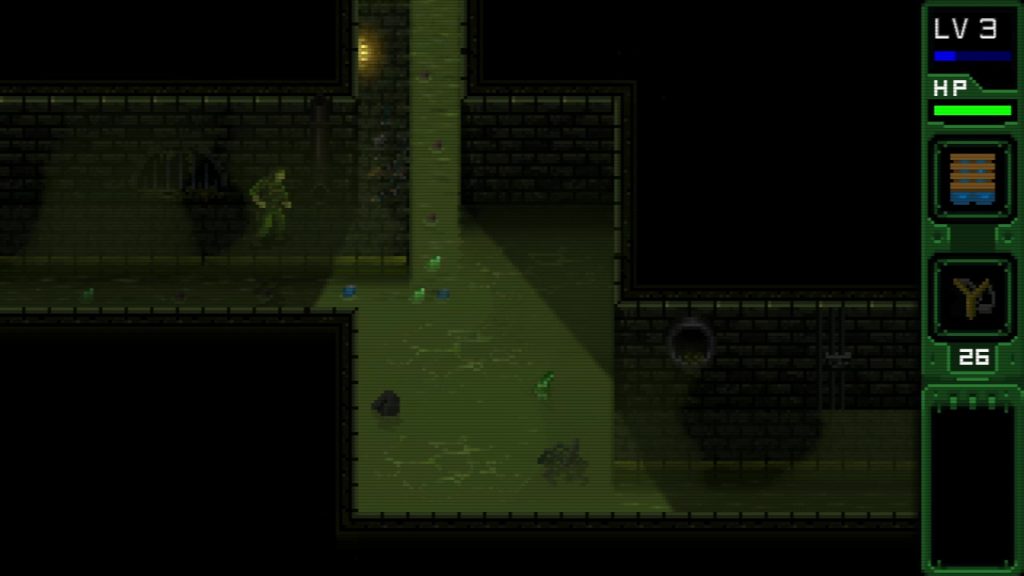 What game would be complete without the requisite sewer stage?

UnMetal‘s story takes you through a wide variety of locales. You’ll explore a prison, medical facility, dense jungles, and other heavily fortified environments on your daring mission to escape the evil X Army. Most of these areas are well designed, featuring fun puzzles, exciting boss fights, and plenty of great dialogue. There are even a few scenes that seem to pay homage to other classic games. For example, there’s a submarine sequence complete with a battle with a giant eel that feels like a deconstructed version of Metal Slug 3‘s sub segment and a boat-borne fight against a chopper that would have looked right at home in Spy Hunter.

Unfortunately, not everything works as it should. There were two moments in particular where UnMetal started to feel like a slog. Both were lengthy mazes where one wrong move will force you to re-do the entire scene from the start. While I get what the developer was going for, in practice, they’re both pretty obnoxious and feel like little more than a way to pad out the experience.

Still, these were never frustrating enough to make me stop playing. Though you better believe I’m not excited to navigate these labyrinths all over again on my next playthrough.

Minor issues aside, UnMetal is an absolute winner. With gut-busting writing and a great mix of retro-inspired stealth action enhanced with modern mechanics, it’s a game that warrants a spot in any classic Metal Gear fan’s collection. Here’s hoping this isn’t the last time we get to take control of Jesse Fox. He may not be the action hero we deserve, but he’s the one we need right now. 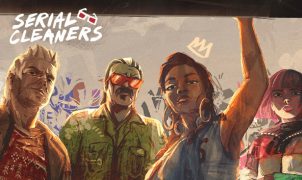 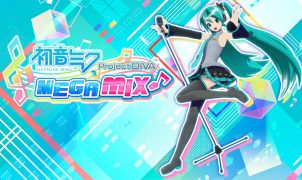 A Mega Masterpiece     Rating rhythm games is hard. I mean, to be fair, rating games isn’t the easiest thing in general. But I’ve always felt as though…