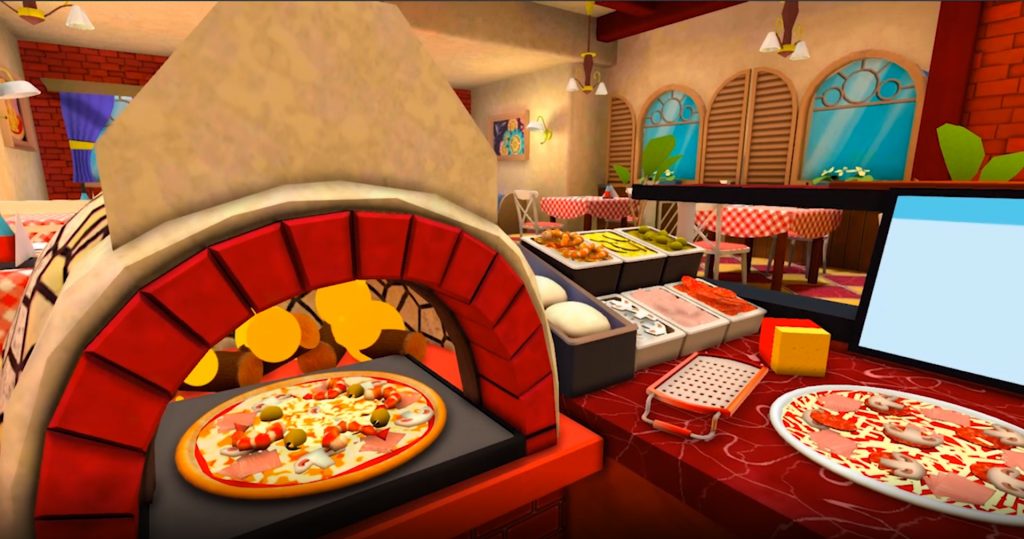 If you’ve ever worked in a restaurant before, you know how hectic a regular day can get. Orders come in non-stop, and the servers want to keep customers happy because they’ll receive an earful if they don’t. Of course, the only thing worse than a super busy day is a super slow one — at least, that’s true for the servers. For the cooks… well, you know what they say, if you can’t stand the heat, get out of the kitchen.

When it comes to heat, Clash of Chefs VR starts off nice and toasty, then brings the temperature to a rolling boil. Developed and self-published by Flat Hill Games, Clash of Chefs VR is available for $19.99 and is compatible with Oculus (I played on my Rift S), HTC Vive, Valve Index, and Windows Mixed Reality devices. With three single player modes — casual, campaign, and endless — and one asynchronous multiplayer mode spanning four different restaurant types, Clash of Chefs VR offers frenetic restaurant fun in one bright and colorful package. 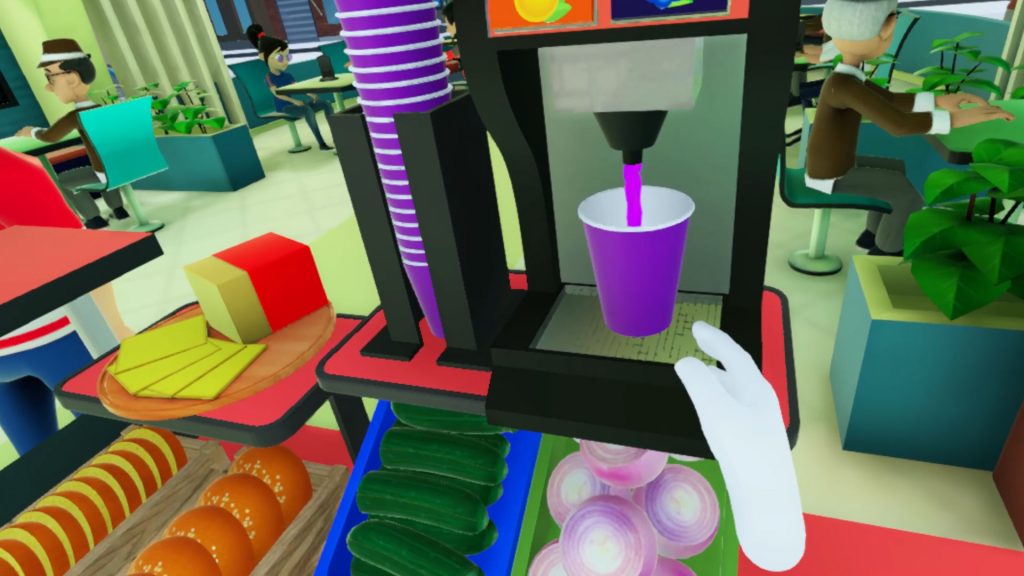 Clash of Chefs VR has players taking on the role of the single chef in the restaurant of their choosing — American, Italian, Japanese, or Mexican. American food will have you serving up burgers and fries, Italian chefs will cook pizza and pasta, Japanese cuisine spotlights sushi and ramen, and Mexican food focuses on nachos and burritos. The campaign mode will warm players up to gameplay, slowly acclimating new chefs to the kitchen with easier dishes like a plain hamburger, then cranking up the temperature to feature complex orders that would even keep the kitchen gods on their toes.

When it comes to controls, it’s clear the dev team focused on balance over kitchen logic — I mean that in a good way, I promise. Things like picking up hamburger patties with your bare hands instead of fumbling with a spatula, for example, give you those precious seconds you’ll need to get orders out the door and onto tables. At first, you’ll only put one or two patties on the grill with one hand while plating things nice and neatly, but after awhile you’ll be throwing patties on two at a time with both hands as orders pile up and customers get impatient. 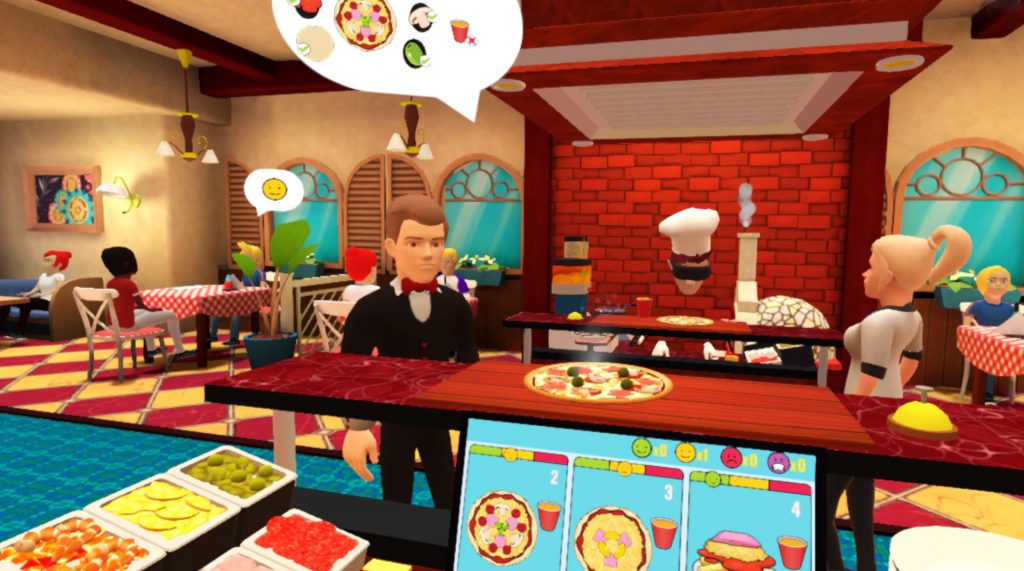 As for the orders, they come in at a trickle at first, then fast and free as the levels progress. I found it was generally a good idea to prep as much as you could beforehand, even if you weren’t sure what the next order would be. The best example of this is in the Japanese food level, where you can prep the seaweed and rice on the roller and pour broth and cooked noodles in a ready-to-go bowl, so by the time sushi and ramen is ordered, all you have to do is select the right toppings. It’s important to get the orders done correctly, but it’s equally important to get them done quickly. After all, you have your high score to think about!

Speaking of high scores, Clash of Chefs VR’s leaderboard indicated that it was working in the sense that it collected other players’ scores, but it didn’t seem to register mine. I’d get what I felt like was a pretty decent score for my first try, and it’d tell me on the left side of the screen, but on the right side it compared my performance to other players and put me right on the bottom at “0” no matter how well I did. It’s not a huge deal, but I did feel a little robbed due to this error. 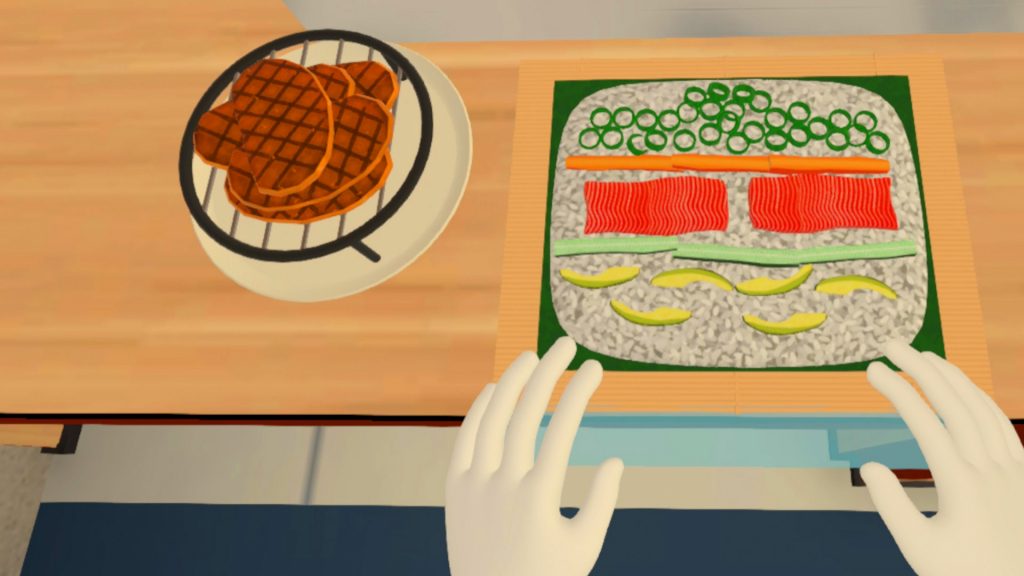 Additionally, I wasn’t too fond of the tutorial, which was highly invasive in that it took up an entire section of the chef’s field of view and played a video instead of just making an infographic. I get that the videos are extremely helpful and likely leave less room for error, but orders are already piling up and I’m still waiting for the video to get to the part where I learn how to boil pasta. I’d constantly have to watch the tutorial, then restart the level since the dinner rush waits for no chef to learn how to cook the very food they’re ordering.

Despite my small complaints, Clash of Chefs VR is a ton of fun and brings the best kind of kitchen energy to the table. For those of us who love getting into a groove and finding a rhythm during gameplay and trying to keep a head above the chaos, Clash of Chefs VR scratches that itch without being overly complicated or unnecessarily encumbered by an unintuitive setting or world. It’s an extremely straightforward game made by a studio that can clearly handle VR development competently.

Clash of Chefs VR may appear simple and childish due to its bright and cheery aesthetics, but don’t judge a menu by its cover — this game will even challenge those with a food handler’s permit. Spending three years in Early Access did Clash of Chefs VR plenty of good, as all that time in the oven ensured a smooth and relatively bug-free experience. If you’re looking for a good VR simulator that you can keep coming back to for fun and frantic gameplay, Clash of Chefs VR will satisfy that craving.

Editor’s note: This review is based on a retail copy of Clash of Chefs VR provided by the publisher. 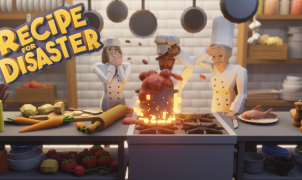