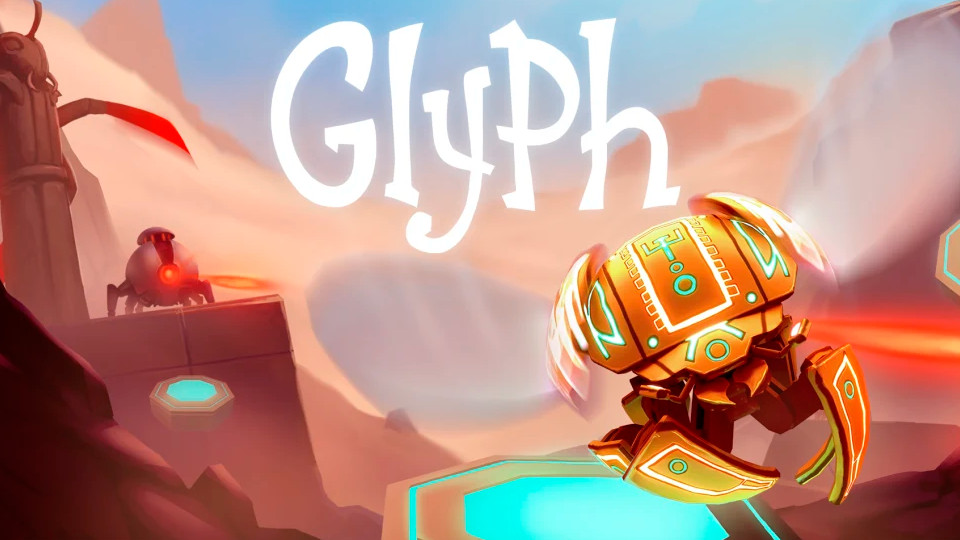 I wasn’t sure what to expect going into my review of Glyph. But since I usually enjoy platformers, I figured I’d give it a shot. Glyph is the tale of a mechanical scarab beetle of the same name. Their world has fallen into ruin for some mysterious reason. All you know for sure is that some virulent poison has spread throughout the natural world, making the sands themselves dangerous. And given that this is a world of searing suns, vast stone monuments, and mountains of sand, that’s a bit of a problem. So your goal is to make things right and restore the world in the process. 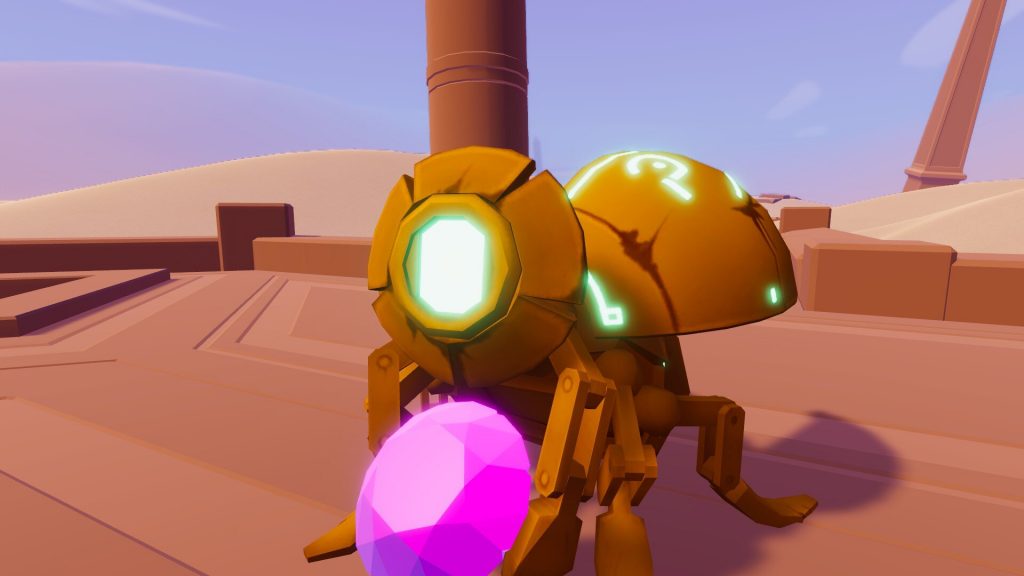 Glyph starts out great, with a vast tutorial that explains the nuances of platforming. While it’s true you control a mechanical scarab beetle, you’re typically rolled up into a tiny ball. So in a way, the game expects true pinball wizardry from you. Momentum is hugely important, and once you start rolling, it can be tough to stop fast enough. Luckily, you have a few techniques at your disposal. For one, you can smash downwards while airborne. Though this doesn’t completely stop your movement, it does dramatically slow you down. You’ll still roll about if you don’t actively control the joystick, but it helps. 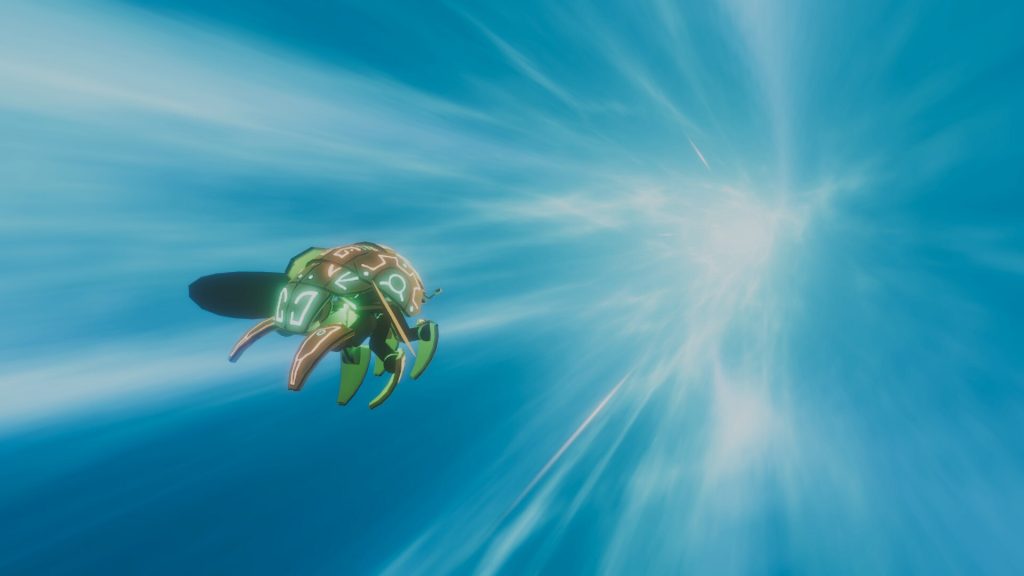 For another, you can fly for brief periods of time. This lasts a scant few seconds but is crucial in getting to hard-to-reach areas. You can also increase your chances of survival by charging Glyph after touching glowing surfaces. While charged, you get a handy double jump, which can really help you get air. Also helpful is you can wall climb up vertical surfaces. And while it’s true you can move the camera around freely, it’s very easy to die before you’ve done so successfully. Because in Glyph, touching the wrong surface equals instant death. It’s kind of like that Lava game we all played as kids. If you touch the floor, you’re dead. The only problem is, ALL the sand counts as dangerous terrain. And though it wasn’t clear initially, untouchable surfaces also include freestanding stones. So essentially, touching anything “natural” results in a fiery death for our poor scarab beetle. 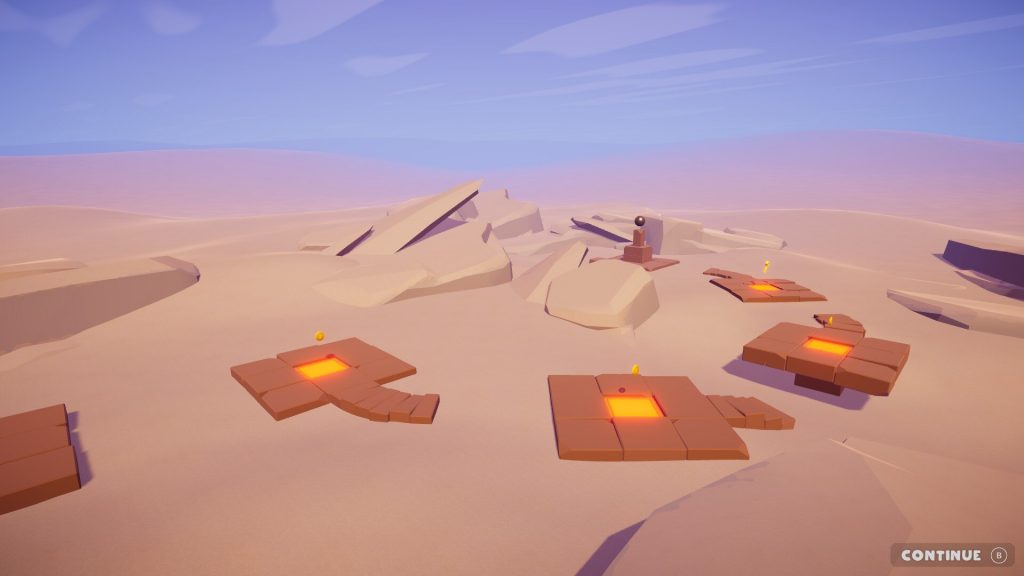 It’s probably clear by now that I’m more than a bit stressed out by this feature. And though you have infinite lives in Glyph, it’s beyond frustrating when you die. Reason being, the game doesn’t employ checkpoints. You’ll keep track of most inventory items when you die, but other progress won’t be retained, which includes deviously placed switches needed to access hidden treasures. And given the sheer size of most levels, it’s disheartening to have to start over from the very beginning. The game isn’t that hardcore initially, but things ramp up very quickly. 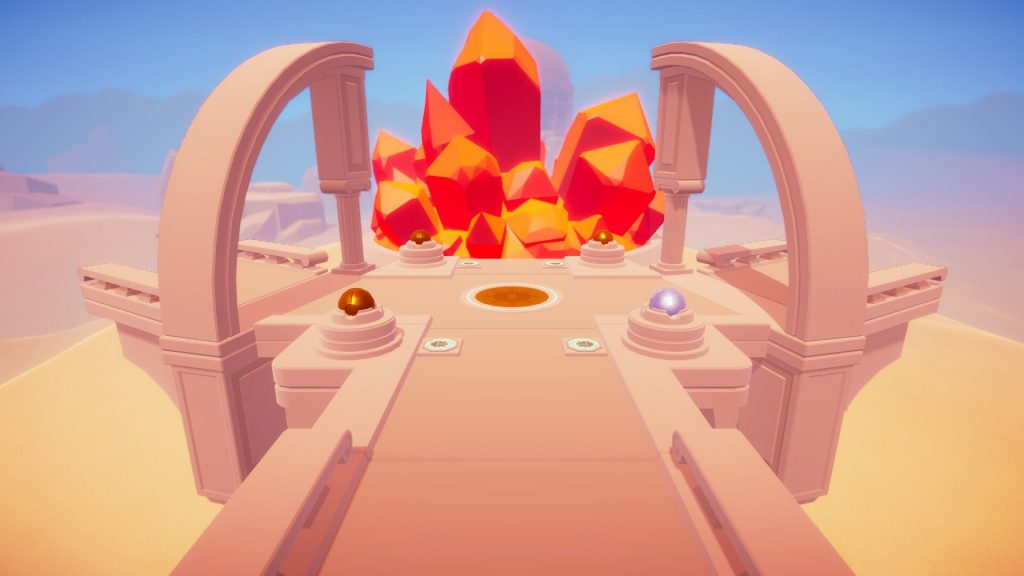 Besides the usual exploration and collection stages, which involve finding all the keys to open the exit, as well as picking up spare gems and coins, there are also time trials. Now, I don’t necessarily hate time trials in theory. But in execution, they’re pretty rough in Glyph. Mostly cause you just don’t have enough time, nor do you have any way to shave seconds off the clock. And I should mention, your score determines your rewards in these time trials, affecting how many gems you get. And since gems are used to unlock more areas in the hub area, and coins are used to unlock individual stages therein, that became a point of contention for me. 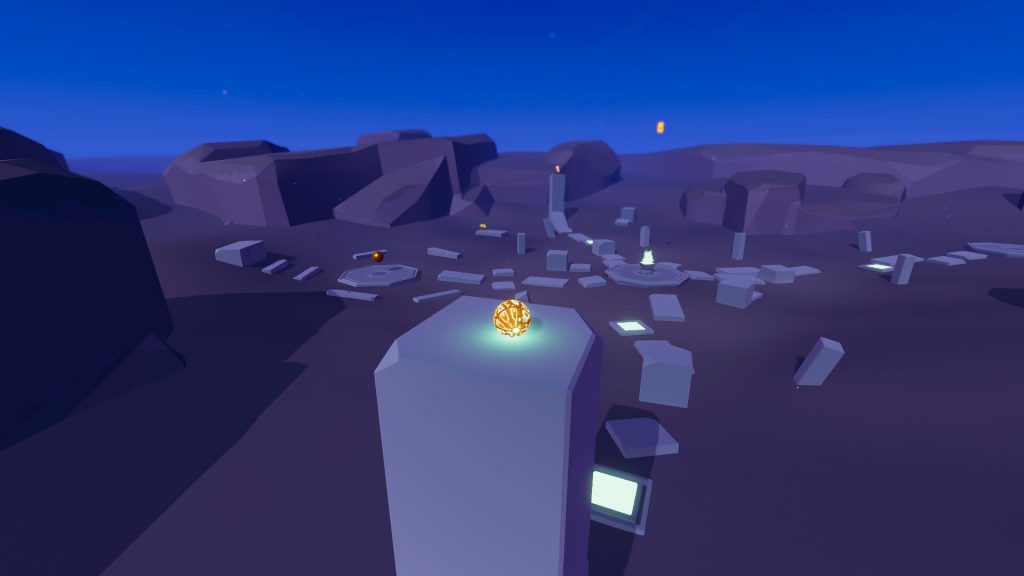 Visually, Glyph is an attractive game. It features lots of earth tones and metallic hues, and it’s easy to fall into a trance playing early levels. Combined with enchanting and mellow musical notes, it can be easy to mistake the game as a relaxing one. Still, I can’t complain about the visual or audio aspects of Glyph, despite my issues with the gameplay. 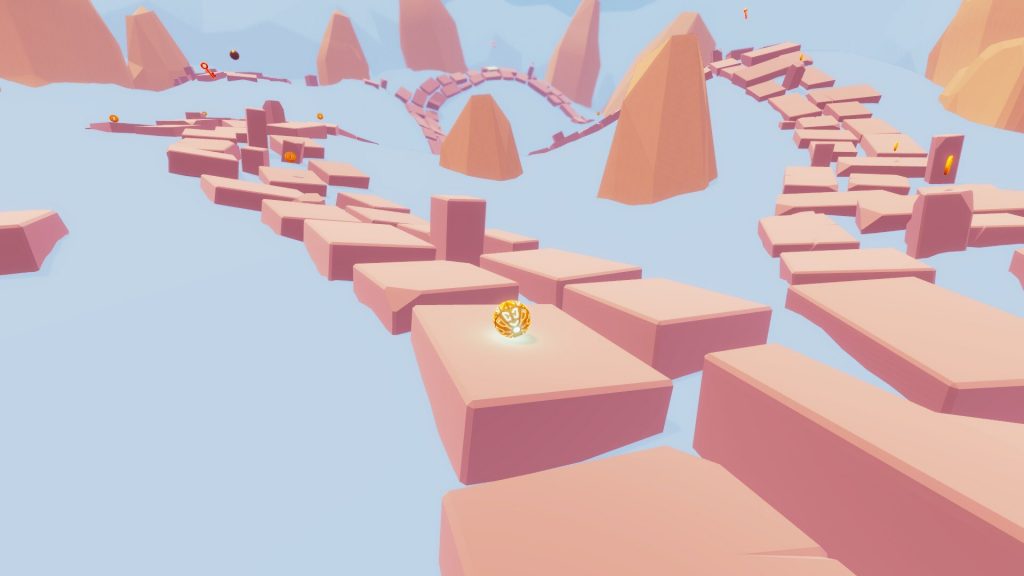 My biggest issue with Glyph is how unbalanced it started to feel. I’ll give one particularly good example. There’s one stage that features rings of columns spaced apart. The exit in the stage floats high above your head, and it’s initially unclear how to reach it. Then I noticed each ring had one column with a strange marking on it. I rolled over, careful not to fall into the sand, and touched one icon, causing a spurt of fire. Then I tried another icon, and realized the level requires you to touch the icons in sequence. Doing so unlocks mechanical platforms, allowing you to get higher and higher. And eventually, I managed to touch several icons spaced very far apart, unlocking a giant pyramid, allowing access to the exit.

These are all cool ideas. But since the game is very hesitant to explain features like this, it became a trial of patience, frayed nerves and sweaty palms. I must have died a good 30 times before I figured out how to exit that level, and that’s not even the hardest level in the game. There’s also an incredibly challenging boss fight at the very end of Glyph. And without spoilers, all I’ll say is that it nearly made me rage quit on multiple occasions. 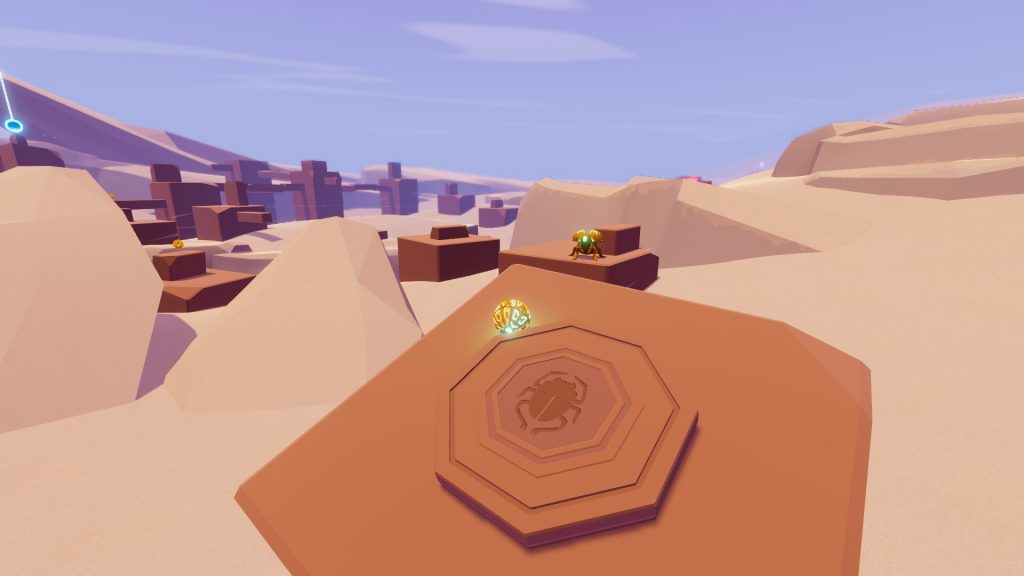 Now, while I obviously have issues with the game difficulty, I can usually forgive that. But the following issues made the game a real struggle. While I could understand how touching the sand and stone is dangerous, I wish the game made that more apparent. Color dangerous surfaces a distinctive color, perhaps. Also, while it can be exhilarating to roll and fly about, it’s often tricky to know where you’re going to land. And that goes double for when you smash downwards. There’s an icon that tries to help, but it often doesn’t display clearly. Plus given how accurate and quickly you need to land, it just isn’t robust enough. 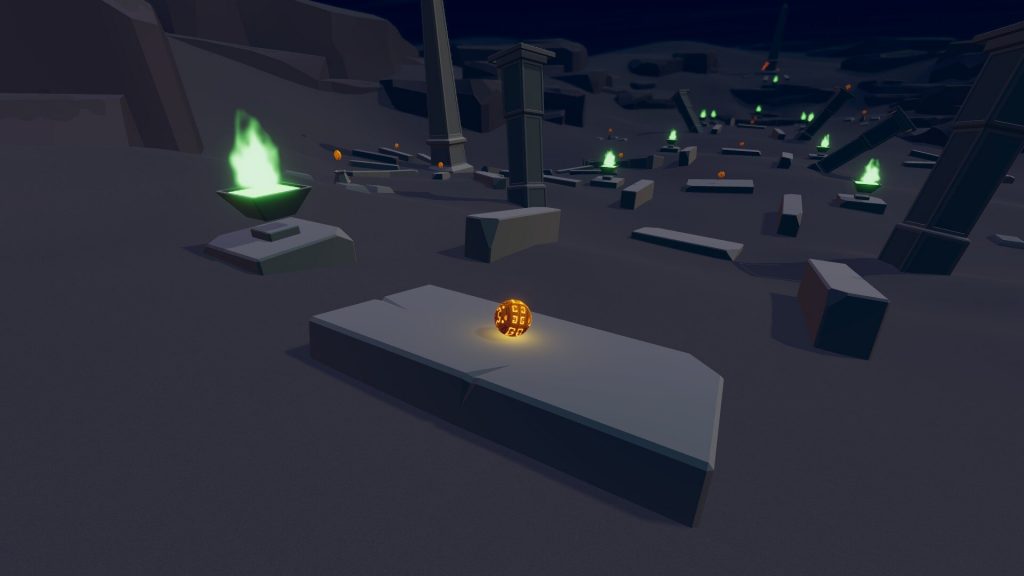 Also, though there’s a ton to unlock and enjoy in Glyph, some of the hidden collectibles are just too damned hard to acquire. There’s something called avatars and artifacts. I’d love to tell you what either does, but in my time with the game, was unable to find even one. And I should mention, just getting the regular items can be a real chore. They require near perfect platforming, rolling off the edge of surfaces, leaps of faith and more to even find them. And given how many levels are meandering, this can really be stressful.

Honestly, a large part of me wonders if Glyph might have been better had it been a 2D platformer instead. As it stands now, it’s just too demanding and unbalanced for me to recommend to most gamers. But if you’re stubborn enough and willing to die repeatedly, you might find something to enjoy here. For everybody else, look for something a little less diabolical.

Super Smash Bros. For Family Yearbook In case you haven’t noticed, the Smash-style brawler is making a comeback. Between this year’s critically-acclaimed Rivals of Aether and even the somewhat…