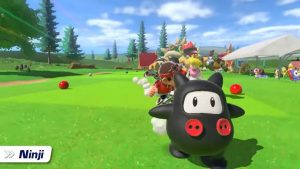 While we felt Mario Golf Super Rush was lacking in content at release, Nintendo seems intent to change that. They announced the game’s second free content update during today’s Nintendo direct.

Two new characters will be joining the rush, including one who is a bit of a surprise. Seeing Koopa Troopa added is hardly surprising. He has a long history in these games. Ninji however is far less commonly included. He’s coming though, providing another adorable option for players.

On top of these two characters, we’ll also be getting two additional courses. These updates for Mario Golf Super Rush are really starting to add up. If you can’t wait to check them out, you won’t have to wait long. This update goes live today. Check it out as part of the Nintendo Direct, included below.