SkateBIRD Review: This One’s For the Birds

My experience with skating games is… limited, to say the least. In fact, I don’t think that I’ve played a skater since the days of Tony Hawk on the N64. And, to be embarrassingly honest, I was absolutely, definitively not good, if not downright terrible, at those games. And then SkateBIRD, from Glass Bottom Games, coasted into my lap, and I decided to dust-off my rusty, non-existent skills and see how often I could fall off a skateboard.

Talk Birdy to Me 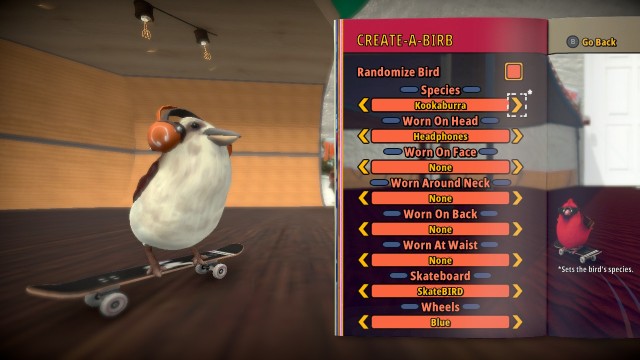 Surprisingly, SkateBIRD has a story. Basically your owner, known only as Big Friend, is down in the dumps lately, and you and your bird buddies have to cheer him up. It’s not deep or particularly engaging, but it’s there, and it’s adorably light-hearted and silly. The story is tied into many of the game missions, which leads to some improbably, delightfully whacky missions. One of my favorites was making Big Friend’s bed, where you have to hit the corners of the blanket to attach balloons. There’s some very meme-ish dialogue between the birbs scattered around each level, but again, it’s nothing serious. It’s goofy, it’s fun, and you’ll likely get a few chuckles out of it.

At the start of the game, you’ll have the option to pick and customize your bird, which you definitely shouldn’t name Flaptain Morgan. There are a lot of birds to choose from, most of which are adorable (and adorably derpy). I ended up picking the quail, because they’re obviously one of the cutest birds in the history of ever. I mean, have you ever seen them lead their babies and do their little hop and their li’l head-bobber thing bounces? Adorable! But I digress. There’s an awesome array of customization options to deck your bird out in different headgear, scarves, capes, and more. You can customize your skateboard as well, with different designs and colored wheels. 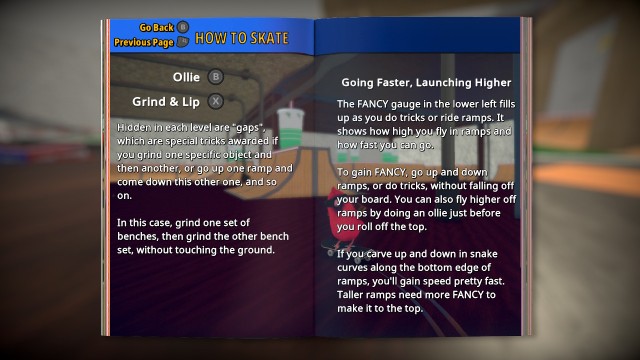 Once you’ve picked your bird, you’re pretty much thrown into the game. But don’t be too frustrated! There’s actually a pretty thorough tutorial you can read over in the options menu. Additionally, the first few missions you take on will help you get used to the controls and flow of the game. That’s not to say that the game is easy. While the controls are fairly simple, getting your bird to actually pull off tricks is, admittedly, an exercise in frustration. The issue there is twofold; first, in order to get up a decent amount of speed, you have to pull off tricks to fill up a meter that reads “Fancy” in the bottom corner of the screen. The more tricks you pull off, the more you’ll fill the meter, and the faster you can move. Sounds fairly straightforward, right? Unfortunately, it sounds great on paper, and just doesn’t work out in practice. Because you’re a bird on a skateboard, everything feels just too dang floaty. There’s absolutely zero friction, and because your bird wobbles and wiggles about when doing tricks, it makes it really hard to determine your angle for landing. If you’re even slightly off, you’ll fall off your board and go rolling around chirping helplessly, which resets your “Fancy” meter and you have to start again from scratch. 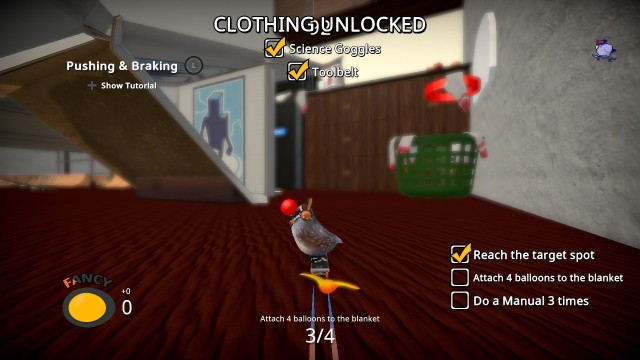 The second issue I had with SkateBIRD is one I touched on in the first: the game is just too floaty and frictionless. It makes it extremely difficult to determine just how much air you can get or how far and how fast you’ll travel when grinding. And speaking of grinding, most of the grindable objects/surfaces don’t really seem to serve much purpose. There are few that will lead to higher areas on a given level, but many of them seem to be pointlessly circular or stranded out in the middle of nowhere. Level design, while charming in theory, just doesn’t work great in action. There’s a lot of empty space, and since gauging speed and distance is such a pain, it’s very, very easy to fall from the upper levels and have to painstakingly make your way back up.

That being said, I did enjoy the premise of many of SkateBIRD’s missions, I just wish the execution was better. It’s not unplayable by any means, but it certainly detracts from what could have been a much smoother experience. At least the addition of multiple levels keeps things from growing too monotonous. 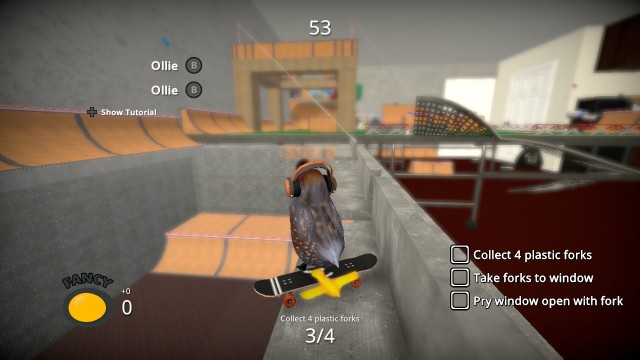 Aesthetically, SkateBIRD is cute. The birds are well designed, and the scale of objects in each level was done fairly well, I thought. Really gives you the feeling that you’re a tiny birb fluttering about on a tiny skateboard in areas made for humans. The birds are colorful and adorable, and the music is absolutely killer. In fact, the music is probably one of the best parts of the game. I honestly can’t think of a single track that I didn’t enjoy or bob my head along to. Really, my biggest complaint with the visuals is that anything and everything in the distance is oddly blurry. Now, I don’t need it to be in sharp focus, but it’s blurry enough that I sometimes wasn’t always sure what I was heading towards, which can make it a bit difficult to accomplish mission objectives.

SkateBIRD is a fun, if flawed, experience. Charming, with a light-hearted story and a good sense of humor, there’s plenty to enjoy, even with the overly floaty feeling that hampers the controls. While it’s likely not the best skater you’ll ever play, it’s probably one of the more unique ones. I don’t think I’d really recommend it to hardcore fans of skater games, but for people looking for a casual experience you can pick up anytime and not feel too invested in, it might be worth a look. 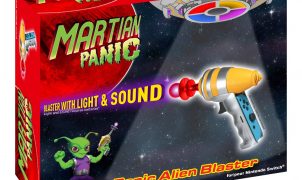