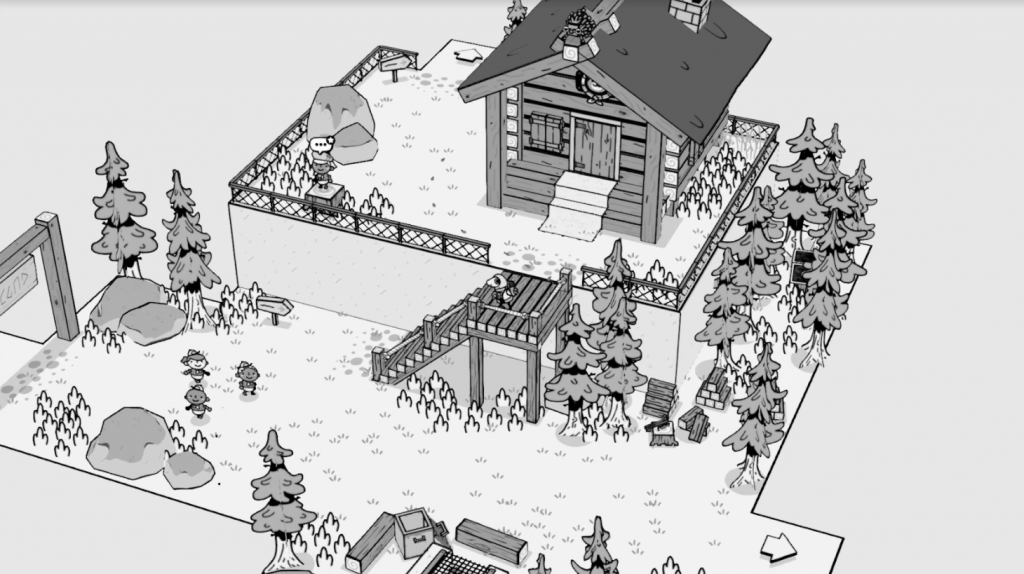 Ahh, the great outdoors! Nothing beats it, right kid? Right. Take it from your grandmother — there’s nothing better for a youngster like you than fresh air and sunshine! That’s why it’s important for you to get on out there and take in all the wonders of our world! Don’t forget to take plenty of photos — an important part of any adventurer’s journey! How else would you be able to help others, catalogue all living creatures, and, of course, prove you’ve seen the almighty TOEM? What’s that? What’s the TOEM, you ask? That’s for you to find out on your own, like we all did. A rite of passage, if you will. So get on out there, take those photos, and come back to tell me all about it.

So begins TOEM, a chill and wholesome photography adventure game developed and self-published by Swedish indie trio Something We Made, comprised of a “well-rested CEO,” a “sleep-deprived goblin,” and a “curly boi.” Featuring an upbeat original soundtrack composed by Launchable Socks and Jamal Green (Sizeable, Equilinox), TOEM sounds as whimsically delightful as it looks. A game that can be fully completed with all achievements unlocked within 4 – 6 hours, TOEM immediately charms players, treating them to a slew of quirky characters and asking them to “solve their problems by snapping neat photos and make your way through a relaxing landscape!” 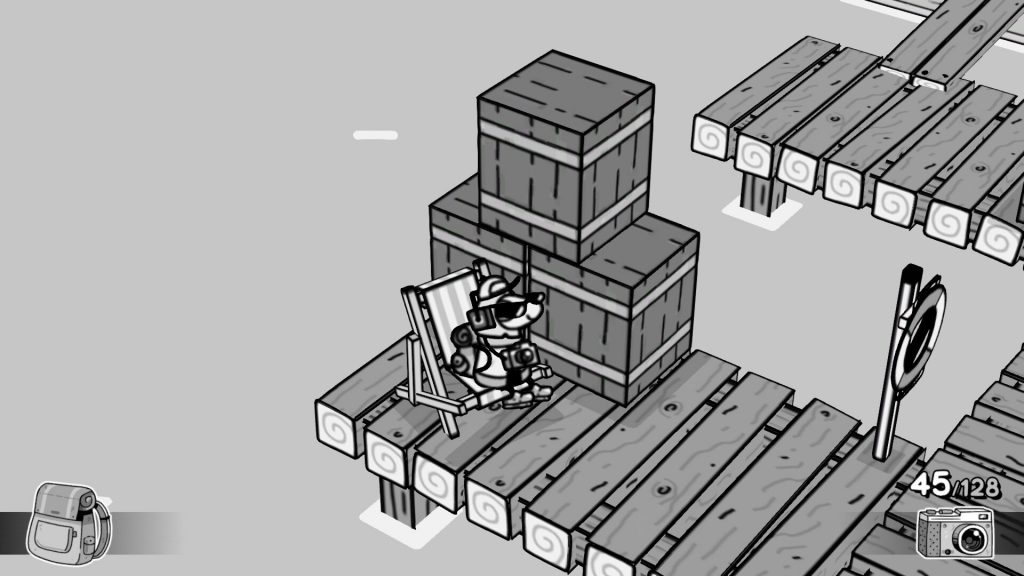 TOEM has a very simple premise — go out into the world and find the mysterious, titular TOEM and snap a photo of it — but getting there is easier said than done. You see, in order to travel between points of interest in this world, one must take the bus. Instead of a regular bus fare paid for by local currency, players will need to offer a helping hand, collecting a stamp for their completed efforts. By taking specific photos, finding lost items, reuniting family members, discovering cryptids, fixing machines, dating ghosts, picking up garbage out of the ocean, and a whole lot more, players will spread good cheer, earn stamps, and make their way to the mystical TOEM.

One of the first things that drew my eye about TOEM was the art style. Everything is adorably hand-drawn and in grayscale, a unique — if not bold — choice. I don’t find the lack of color a detriment; on the contrary, I think the experience was enhanced due to this decision. For one, the puzzles felt a bit more challenging due to the lack of color being a dead giveaway to some solutions. It’s easy to spot a frisbee on a tree with a splash of color indicating its hiding place, for example, so removing what could have been an unintended hint system meant TOEM’s puzzles had to be truly teased out through brainpower. 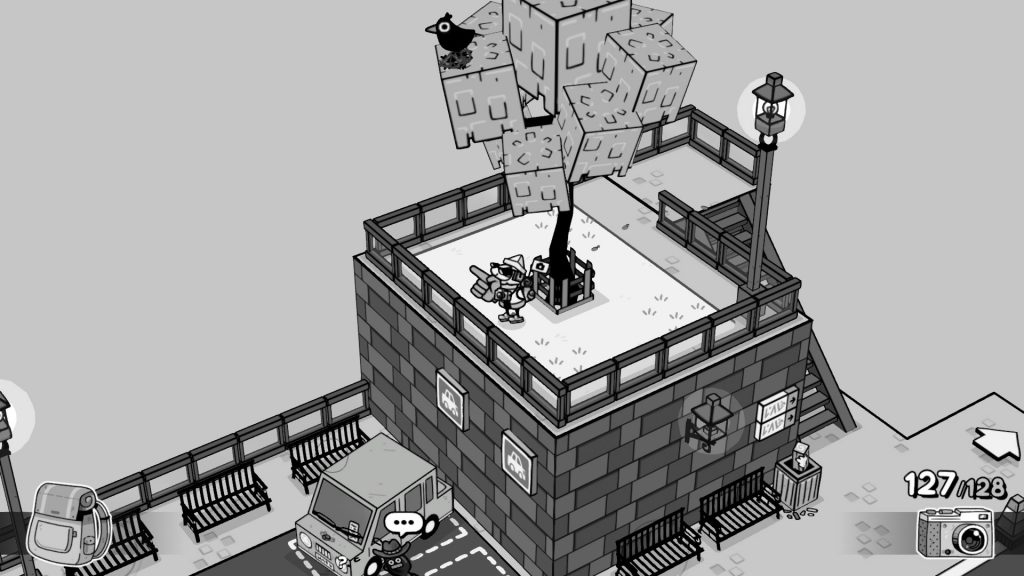 Speaking of puzzles, TOEM does not disappoint in the slightest. Every challenge is good, silly fun, from gaining access to a secret bear concert in the woods to taking a photo of a most excellent mustache. Each of the individual worlds are full of busy areas with little scenes to discover, the answer to one puzzle likely readily identifiable in another area. About 80% of the puzzles are solved just by talking to every character and exploring every nook and cranny, while the rest can be figured out by utilizing every tool at your disposal.

What tools, you ask? One is the tripod, which is really helpful when trying to take photos of shy cryptids. Simply place the tripod near the hiding spot of the creature, then hide out of sight. You’ll be able to snap a pic of an elusive beast with ease this way! Another tool is the horn, which makes annoyingly loud noises to scare off seagulls or break through ice blocking your path. If you still can’t complete a challenge in one world, move on to another when possible — chances are the answer is in another place entirely. 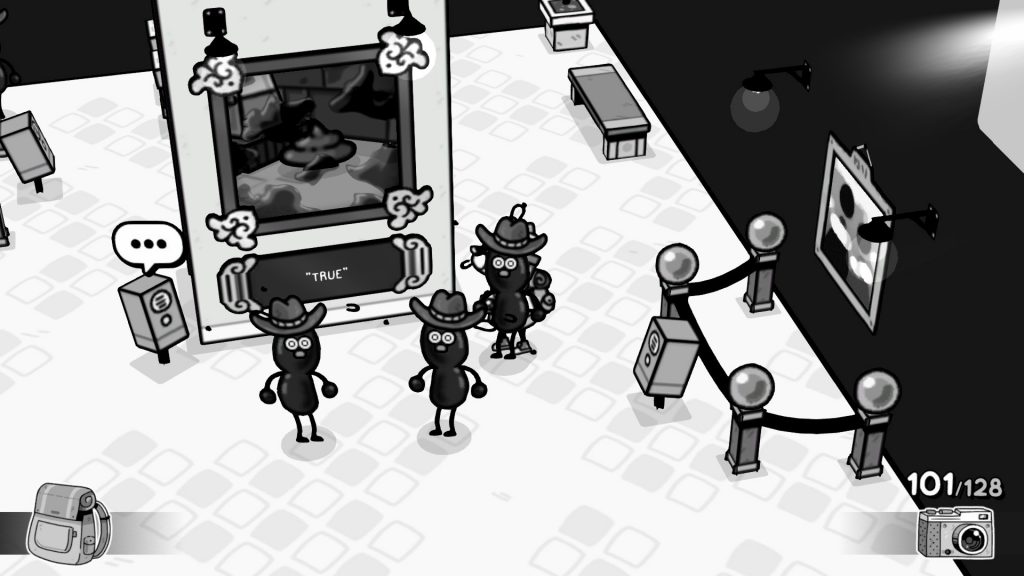 In addition to completing tasks and challenges for the village and city folk, TOEM has a plethora of animals to find throughout the worlds. Plenty of good dogs, cats, cows, and even deer to snap photos of (and pet!), and finding all of them will complete the album’s compendium. For those interested in completing a game to its fullest, TOEM makes it pretty easy to gain 100% achievements, the compendium part of such an undertaking. There are some individual ones that make it frustrating to slog (or should I say clog) through, but if you’re playing the game as intended from start to finish it shouldn’t be too much of a struggle.

Although this is one of the most charmingly fun wholesome puzzle game I’ve played recently, TOEM has a few things holding it back. For one, I wish there was room for more than 128 photos. I found myself constantly deleting photos to make room for pics I needed to progress, which was a little sad considering some of those were just stick figures or cosmic boxes that would disappear. I also wish the camera could be controlled with the Q and E buttons to rotate the little scenes instead of it being 100% mouse-based. There’s also no way to currently zoom if you don’t have a track wheel on your mouse, so if that’s missing in your life, wait until the next update — the dev team has promised keyboard input soon.

I had a hard time putting TOEM down, its calming, cheerful nature feeling way too cozy to quit. Its photography-based puzzle gameplay will charm just about anyone that feels drawn to the title, so if you have even a remote interest in TOEM, it’s absolutely a safe bet. If you want 4 – 6 hours of wholesome fun that will leave you craving for more, take a little hike with TOEM.

Editor’s note: This review is based on a retail copy of TOEM provided by the publisher. 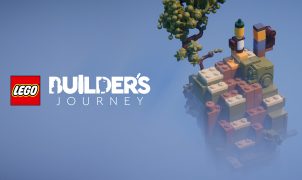 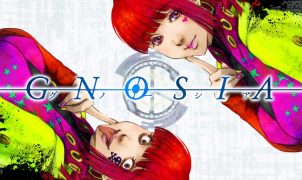