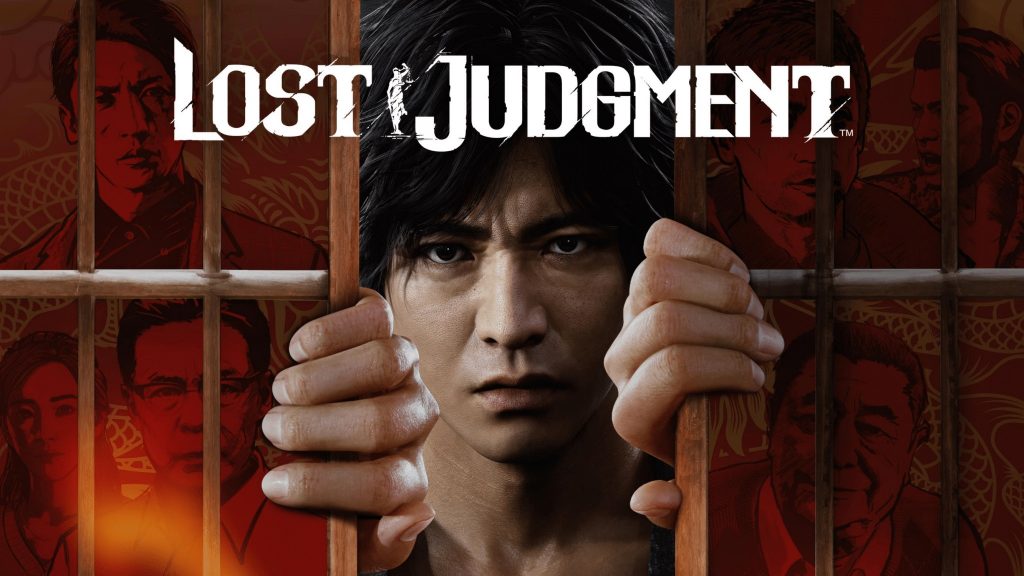 When it made its debut in the west back in 2019, Ryu Ga Gotoku Studio’s Judgment was a breath of fresh air for fans of the Yakuza franchise. It introduced players to Takayuki Yagami, a lawyer-turned-private investigator, as he unraveled a web of conspiracies that extended to the highest echelons of power.

Of course, gripping stories filled with unexpected twists and turns were nothing new for the series. But it was the changes to the moment-to-moment gameplay that made Judgment so remarkable. More than a brawler with a story to tell, the game leaned hard into its detective theme. It tasked you with investigating crime scenes, tailing criminals, and going undercover to solve its various capers. These elements came together to create a game that felt familiar while offering plenty of fresh mechanics to spice things up.

Now, Yagami is back with another case to crack in Lost Judgment. This sequel builds upon the sturdy framework of its predecessor while paring down what didn’t work so well. But does it do enough to warrant a retrial?

When One Case Closes, Another Opens 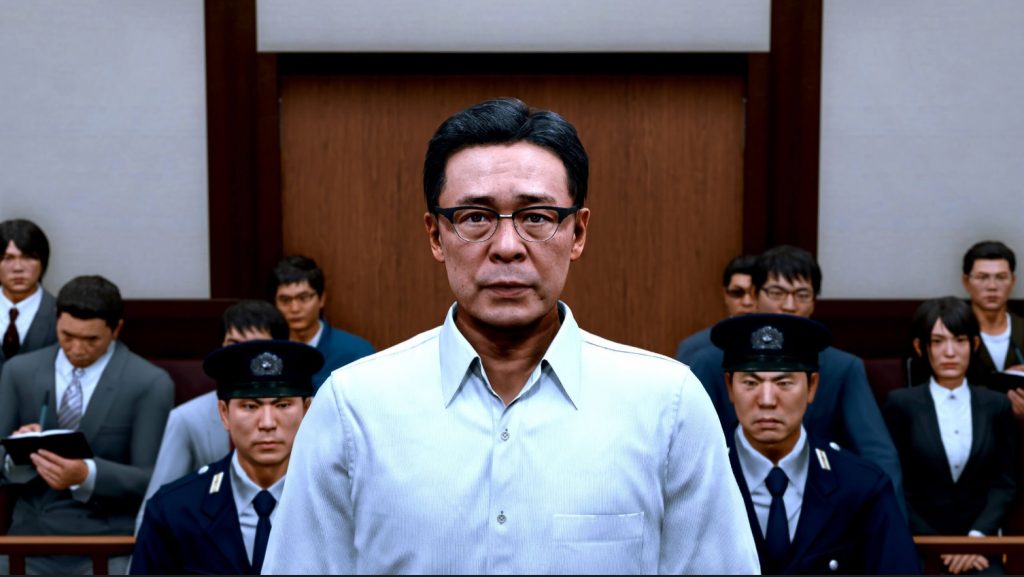 Lost Judgment‘s story takes place in December of 2021, following the events of the previous game. After an off-duty police officer accused of groping reveals the whereabouts of a murder victim during his trial, the Yagami Detective Agency is called in to investigate how two seemingly unrelated crimes that occurred simultaneously are somehow connected. Yagami’s probe takes him from Kamurocho to Yokohama’s Isezaki Ijincho district, where he becomes entangled in a series of incidents plaguing Seiryo High School.

This new setting feels like a significant departure for the series. Sure, you’ll still spend time taking the fight to Tokyo’s criminal element throughout the story. But it’s the way the game focuses on subjects such as bullying, teen suicide, and other themes that make Lost Judgment‘s narrative feel fresh and more relatable. As a result, the game’s story touched me in ways I never expected, making it easily one of my favorite offerings from the studio to date. 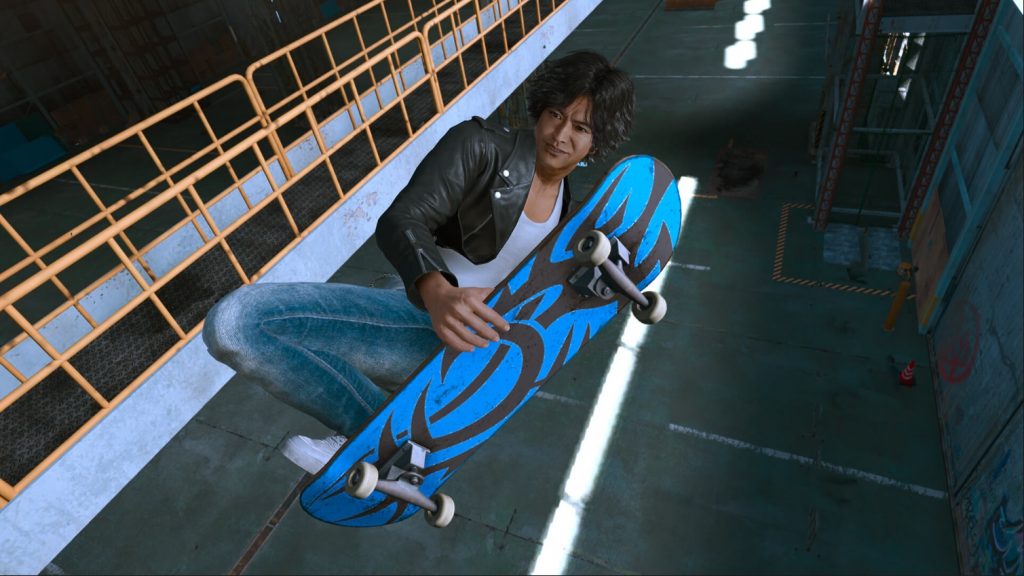 Seiryo High School is more than just a set piece. Instead, this new environment proves to be a significant part of Lost Judgment‘s package. Without giving away any spoilers, Yagami finds himself tasked with becoming an advisor to the school’s various clubs to investigate an ominous figure known as “The Professor,” who’s been causing problems all around Ijincho. These clubs offer quests called School Stories. These function a lot like the social links found in the Persona series. As you get to know the clubs’ students, you’ll further the game’s story and level up various traits such as Yagami’s teamwork, appeal, focus, and guts stats. And, as you’d expect from a Ryu Ga Gotoku Studio production, the writing for these segments is superb and really adds to the experience.

School Stories also give you access to some great mini-games. For example, linking up with the skaters gives you access to a skatepark where you can pull off some gnarly tricks. And while it’s not Tony Hawk material, it can be fun to see just how far you can get your combo meter to go. Or perhaps you crave fighting game tournaments. If so, you can mentor the eSports club and school some teenagers in Virtua Fighter 5: Final Showdown. My personal favorite of the bunch was the robotics club. It lets you build custom robots and compete in frantic scrimmages against rival schools in a mechanized turf war. It’s insanely addicting and can get quite challenging.

New Tricks of the Trade 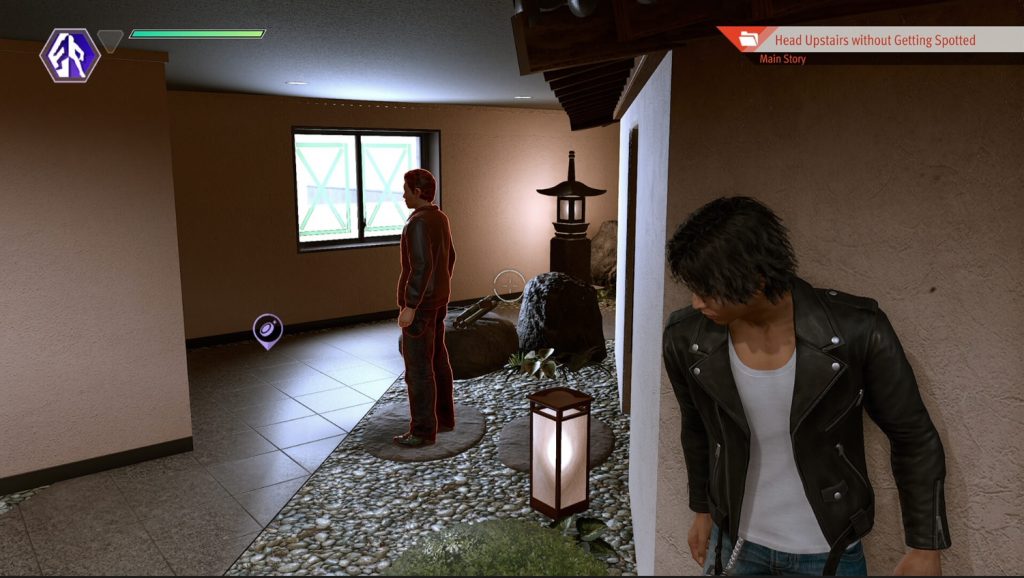 Those are only a handful of the distractions the School Stories offer. From cutting a rug at the dance club, trading blows in boxing matches, and even joining a biker gang; there’s enough here to keep you glued to your PS5 for hours. However, if you don’t feel like reliving your teenage years, that’s fine too. Most School Stories are optional. But you’ll be missing out if you choose to ignore them.

Lost Judgment introduces several new gameplay mechanics. And while some are better realized than others, they all do a decent job of keeping the moment-to-moment gameplay more varied than its predecessor.

There’s an enhanced parkour feature that lets you scale walls like a leather jacket-clad Spider-Man for starters. The game also includes some Metal Gear-inspired stealth mechanics this time around. For instance, when infiltrating an area, you’ll be able to cling to cover, toss coins or pepper balls to distract or blind enemies. Or, if you find yourself in a pinch, even perform silent takedowns.

The stealth and parkour features, while cool on paper, feel underutilized. The reason for this is that the actions you perform are almost entirely contextual, with very little room for experimentation. Still, even if they’re rigid in design, they’re integrated into the story well enough that they never feel out of place. And, as such, they do a decent job of adding some variety to the gameplay, even if they’re not as fleshed out as they could have been. 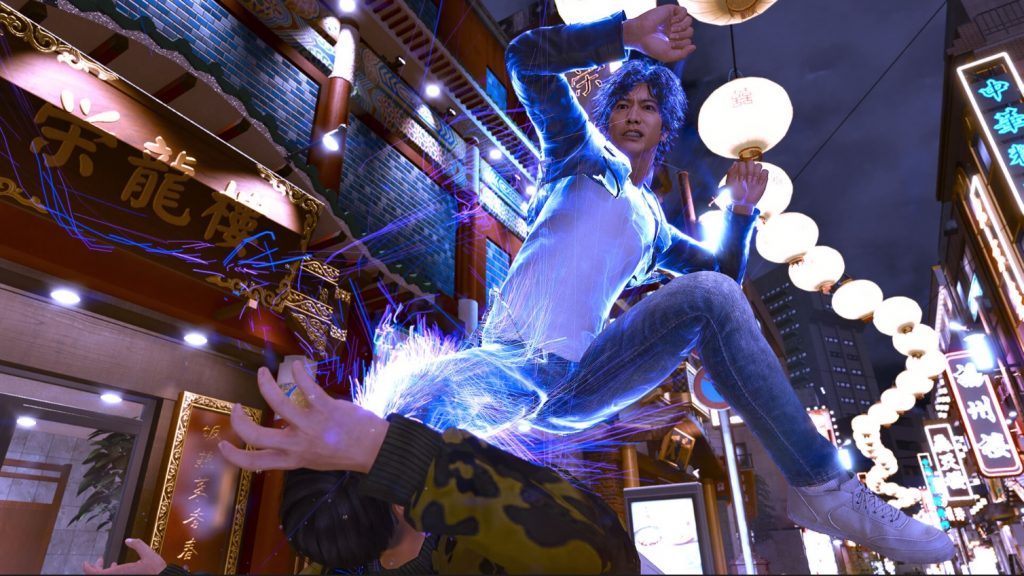 Combat has always been integral to the Yakuza series and its spin-offs. Lost Judgment is no exception, offering a robust fighting system that delivers satisfying beatdowns. There are three fighting styles to master: Snake, Crane, and Tiger. And each technique can be augmented with dozens of abilities you can unlock by spending the points you earn from completing quests.

The Tiger and Crane both made their debut in Judgment, focusing on power and mobility, respectively. However, the Snake style is entirely new and quickly became my favorite of the three. It’s a fluid fighting style that emphasizes using your opponent’s energy against them. For example, the technique allows you to swiftly shift behind an oncoming attacker to strike them from behind. Or perform flowing hip-tosses to send them careening into the pavement seamlessly. Add to this a wealth of new and devastating EX abilities, and you have a fighting system that’s fast, punchy, and, above all else, hugely entertaining.

A Feast For Judge Eyes 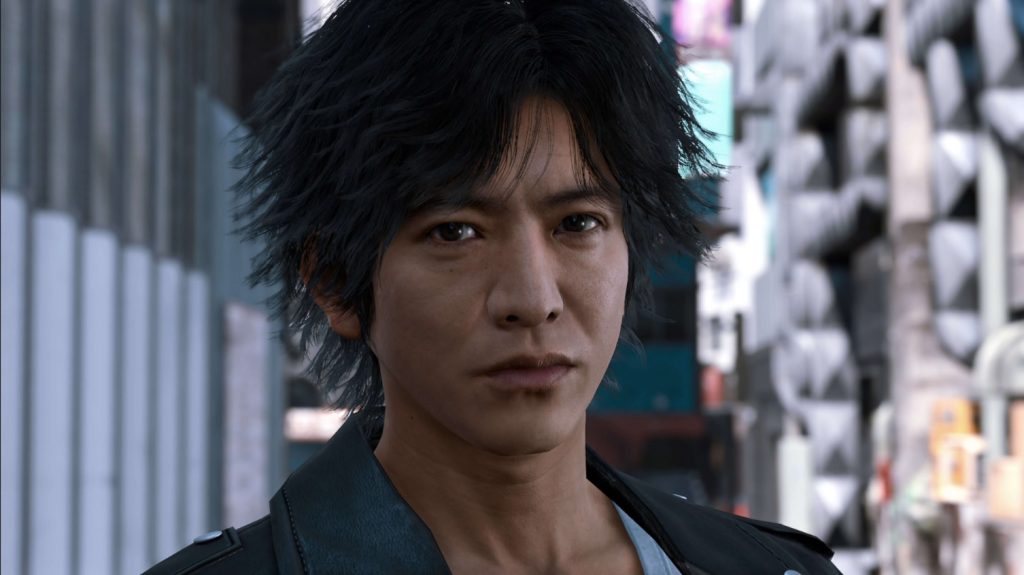 In terms of presentation, Lost Judgment looks fantastic on the PS5. The game sports the same visual upgrades found in the remaster of the original game that was released earlier this year. With improved textures, more detailed and expressive character models, along with updated lighting and a silky smooth framerate. It’s pretty impressive and goes a long way towards immersing you in the bustling streets of Kamurocho and Ijincho. Even after reviewing every game in the series since 2015’s surprise release of Yakuza 5 on the PS3, I’m still amazed by all the little details the developer crams into every environment to make it feel more lifelike and lived in. As you’d expect, Lost Judgment continues this trend, delivering a strikingly believable world you just want to lose yourself in.

The game also puts the PlayStation 5’s hardware to good use. The most noticeable bonus is the near-instant loading times when traveling to new locations – a benefit of the system’s SSD. Everything loads seamlessly, whether you’re traveling from Kamurocho to Ijincho or simply transitioning between gameplay and cinematics. It sounds like a little thing, sure. But once you experience it, you’ll wonder how you ever suffered through lengthy loading times before. Lost Judgment also utilizes the DualSense controller’s enhanced rumble in some fun ways. I especially liked the convincing sensation of the wheels on Yagami’s skateboard gliding across the asphalt. Is it mind-blowing? No, not really. But it just feels right and makes you feel more connected to the game world.

Lost Judgment features dual English and Japanese audio tracks. Purists may prefer playing in the game’s original Japanese to enhance the immersion. However, both are well done. I found that the English-speaking actors for the main characters delivered standout performances all around. In addition, the game lets you switch between both English and Japanese tracks directly from the options screen. So if you want to experiment to see which one you enjoy more, you’re free to do so. 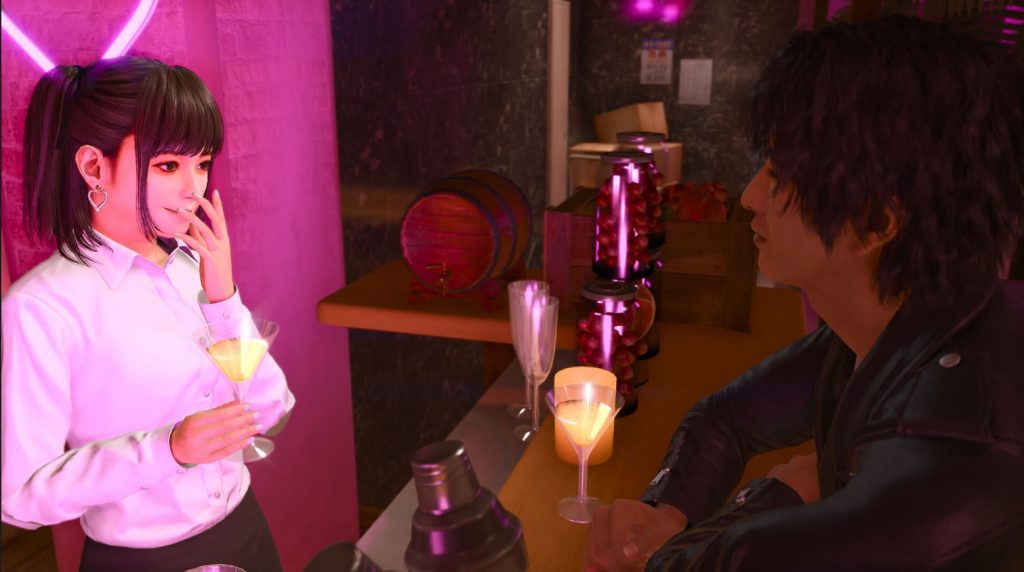 If you’re looking for a game that will keep you busy, Lost Judgment definitely fits the bill. The main story alone took me over 30 hours to complete during my review playthrough. And since starting my New Game Plus file, I’ve sunk close to a dozen more hours into the game, completing additional side stories, cases, and school stories, and am nowhere close to 100% completion.

Then again, how can you blame me with so many distractions all around? The streets of Kamurocho and Ijincho are teeming with activities to siphon away your precious hours. Fan-favorite activities like darts, golf, batting cages, drone races, and mahjong are always just around the corner. Additionally, numerous arcades await, filled with pixel-perfect ports of Sega classics like Fantasy Zone, Fighting Vipers, Motor Raid, and more to strip you of your spare yen.

One of my favorite features new to Lost Judgment was the addition of a Sega Master System in Yagami’s apartment. There are 12 games scattered across the map, including Alex Kidd in Miracle World, Enduro Racer, Penguin Land, and more. The emulator even supports save states – a welcome touch indeed!

Building upon its predecessor in every conceivable way, Lost Judgment is a superb sequel that tells a story that will leave you asking yourself what justice means to you. It’s a gripping thrill ride full of twists and turns that will keep you guessing until the very end. And even after the credits roll, the city streets will call you back for more with their countless distractions.

Not every new feature is a total game-changer, of course. For example, the stealth and parkour sections could use some fleshing out. But considering just how much the game does right, these missed opportunities hardly seem to matter in the end. When all is said and done, Lost Judgment is another hit for Sega and Ryu Ga Gotoku Studio, and I can’t wait to see where the series goes next.

Full disclosure: A Lost Judgment review copy was provided by the publisher.

An amusing and artistic adventure, but one cycle was enough I’m sure that most of you out there who have been playing video games for a while have heard…