BloodRayne Betrayal: Fresh Bites Review: When it Rains… It Bleeds

The BloodRayne franchise is almost 20 years old. It’s strange saying this aloud for this BloodRayne Betrayal: Fresh Bites review. The early 2000s were an age where Goths and leather dominatrix-suited vampires were still at the heart of the pop-cultural zeitgeist, with films like Blade, Underworld, and Queen of The Damned. When BloodRayne was nearing its peak in popularity, around the same time as the release of the Devil May Cry series, Rayne was the undoubted queen of the video game vampires. Until the ill-fated Uwe Boll BloodRayne adaption, which, in many ways, drove a stake of sorts into the heart of the franchise. The last original release being 2011’s BloodRayne Betrayal.

Developed by WayForward Technologies and published by Ziggurat, BloodRayne Betrayal: Fresh Bites is an upgraded version of the 2011 original. A 2-D sidescrolling hack-and-slash platforming game, this game is seriously challenging but a whole lot of fun if you’re in the mood for fast and frenetic action. 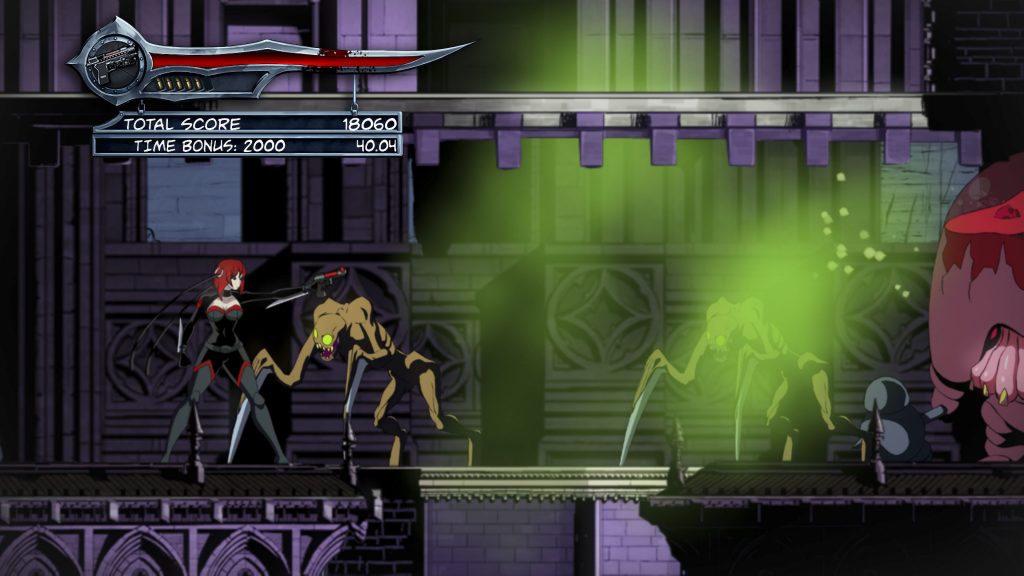 The original BloodRayne games follow the story of Rayne, an American Dhampir working with the Brimstone Society to protect humanity from paranormal threats. Deadly, beautiful, and calculatingly cold, when not slaying the undead, Rayne oftentimes plays an unwitting foil to the plot of many Nazi occult groups throughout the series, such as the Thule society.

Throughout most of the franchise, we see Rayne on a decades-long quest for revenge against the vampire, Kagan, a powerful vampire who had slaughtered Rayne’s entire family years after raping Rayne’s mother. Kagan is Rayne’s father. In this game, The Brimstone Society has asked Rayne to lead a final mission to kill Kagan. Though she has some help along the way, ultimately, Rayne is on a mission to face him off alone.

Unfortunately, that’s essentially as far as the narrative goes in BloodRayne Betrayal: Fresh Bites. As a result, the story is rather light in terms of plot. Replace the name Rayne with Alucard, and to be honest, it’s somewhat of a very similar story: a vampire in a castle hunting their father while kicking ass. But to be fair, BloodRayne is really more about the gameplay anyway, with 15 challenging stages littered with enemies, traps, and bosses. All for a linear 2D beat-em-up featuring vampires and the supernatural.

Blinded By The Sunlight 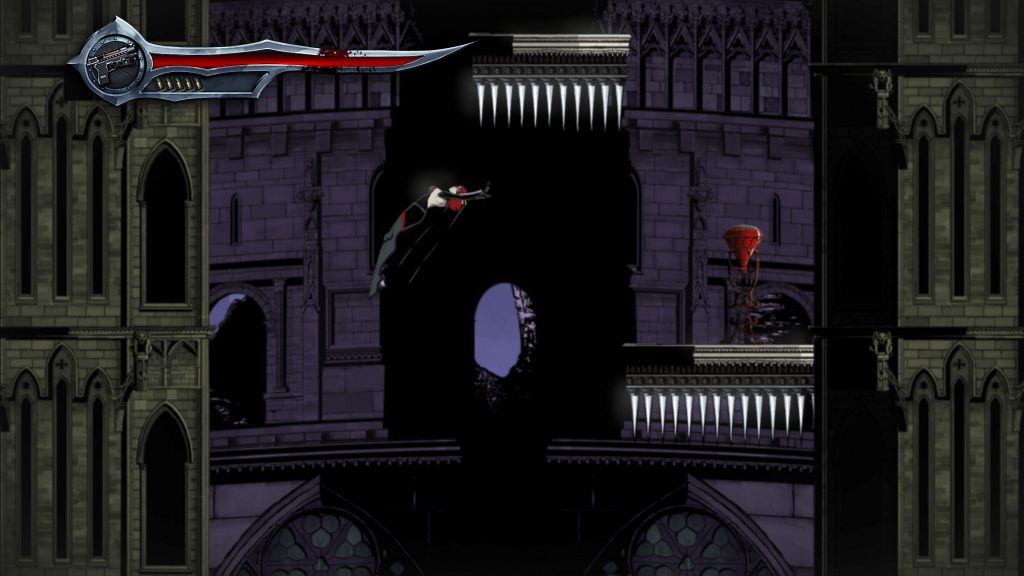 For a game that came out in 2011, Bloodrayne Betrayal: Fresh Bites does indeed take a fresh approach to the original. For starters, the backgrounds are really well developed, and both the character art and graphics for the PS5 look like something out of a graphic novel. With dark and gothic color tones, the game feels reminiscent of old-school 2D castle-crawlers like Castlevania. But perhaps the biggest surprise in design is the game’s animations for its enemies. Undead frogs, vampires, and really just all sorts of monsters can spawn from just about every corner, including from outside the player’s screen.

The soundtrack in the game is also excellent, reminiscent of old arcade music, with lots of metal guitar and breakaway music during combat or when Rayne is in serious danger. Likewise, the voice acting really brings it home in this one when it’s featured, as Laura Bailey returns to play the titular character, and Troy Baker expresses his villainous finesse as Kagan himself. I can’t stress enough that this is a game where players will die a lot. Thankfully, the levels are designed where blood fountain checkpoints are almost everywhere, allowing Rayne to resume the challenge at full health, usually not that far from where she left off.

One big issue I did have in this game is its platforming. As the controls are somewhat clunky and a lot of the level design challenges in the game are just knowing when to platform, jump, and dodge. Though it’s not difficult to eventually learn the necessary patterns, the trial-and-error method can feel repetitive. Especially, for completionists players like myself, who grind away at the same levels attempting for that perfect score.

Each level has a final score rating determined by how fast the player finished the stage, their number of kills, whether or not they avoided taking hits, and how many treasures they collected. All levels once played through are also repeatable. This is good because small red skulls are hidden throughout the game’s levels, which you can use to help craft permanent boosts for combat. 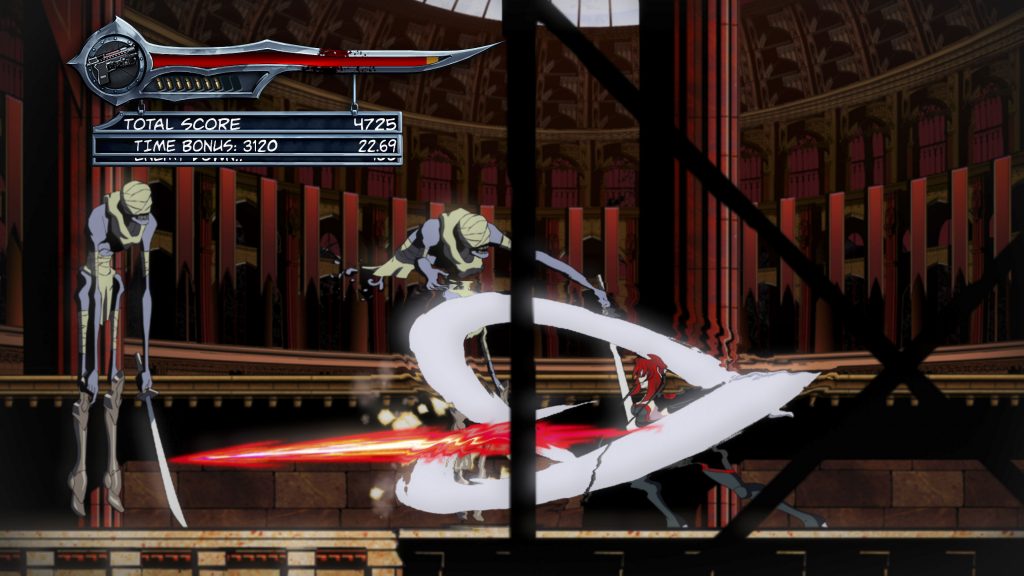 Oddly enough, despite having years to refine itself, BloodRayne Betrayal: Fresh Bites feels slightly dated. The tutorial explanations aren’t all that helpful, and for the most part, the early levels are a lot of hack-and-slashing away at everything. A lot of the gameplay initially feels like the old Castlevania games but with a lot less of the powers, as Rayne is mostly stuck to her original sword slash abilities plus a very few guns to choose from.

I strongly recommend using the D-pad over the analog stick for better control. Much of the combat in this game is less button-bashing and requires a lot of finesse. It’s all about knowing enemy hitboxes — especially for boss battles — and rushing into and out of combat. Thankfully, Rayne also has some solid dashes. However, her backflip, wall-scaling, and forward slash can feel awkward and take some getting used to in order to judge their ranges properly. Finding patterns to utilize all of the game’s combo strings is honestly the most enjoyable part of BloodRayne Betrayal: Fresh Bites.

Directional attacks can help knock enemies away, but you can also combo stun or bite attack enemies to poison them. When in danger, Rayne can thankfully drain the blood off of dazed enemies after performing a stun combo. It even makes her temporarily invulnerable during the animation when she’s drinking. I can’t stress enough, battle in this game is difficult, especially because enemies can stagger when they attack Rayne. So it’s easy to get swarmed into a game over.

BloodRayne Betrayal: Fresh Bites comes in both standard or classic difficulties. Lauded as too difficult of a game upon the first release, the new standard difficulty makes the game much easier and is a better option for newer players and those not all that perfect with the platforming genre. Still, for a real challenge, play classic, where the enemies and traps make it almost unbearably difficult in the later levels.

It’s A Better Slasher Than Platformer

If you’re thirsting for a difficult slash-’em-up platformer, Bloodrayne Betrayal: Fresh Bites will most definitely satisfy. With increasingly difficult stages and combat, this is a game meant for hardcore fans of the genre. Combine that formidable challenge with eye-popping 2D visuals, quality sound, and fast-paced, addicting gameplay, and this 8-hour slashfest is a blast to play. It just lacks a truly engaging story. 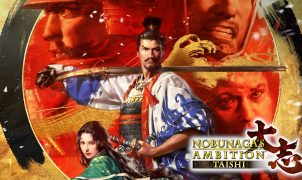 A Real Learning Experience The Nobunaga’s Ambition series has been around for a long time. A long time. We’re talking an NES-era debut here. For over 30 years now, Koei Tecmo’s…