You have T-Minus 30 minutes to build a thriving city and then leave it all behind. 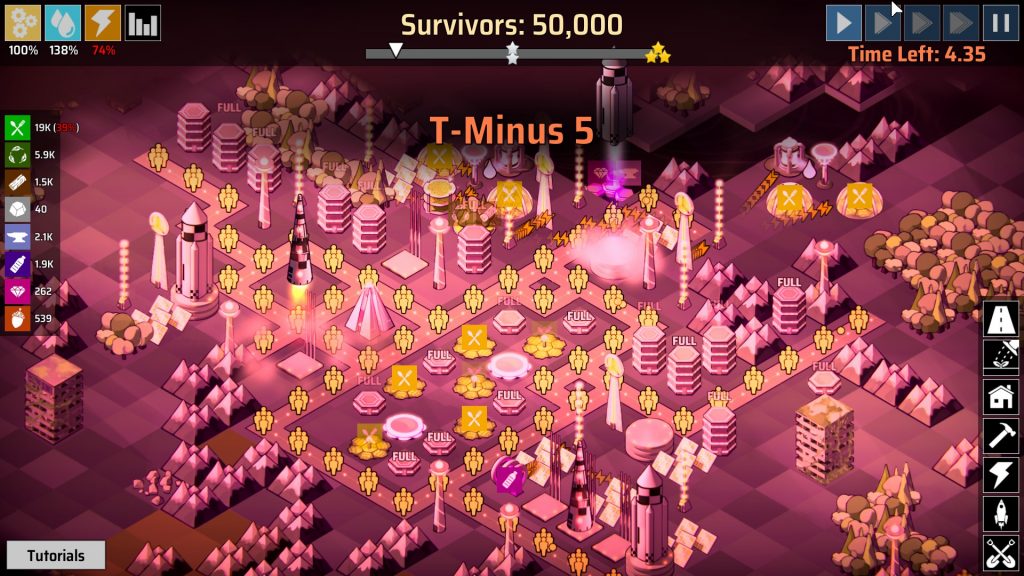 Millions of years ago, the dinosaurs were wiped out by an incoming asteroid, and humanity foolishly believed such an extinction event would never happen again.

Most of humanity was wiped clean from the face of the Earth; in their hubris, they didn’t even bother trying to escape.

So when the universe decided “third time’s a charm” and hurled another cosmic projectile at our pale blue dot, the remnants of a once great human civilization didn’t hesitate. With only 30 minutes to spare, they’ve elected you to take charge of getting as many survivors off the planet and into the depths of space, safe from future worldkillers. Not everyone will live, but with your guidance, enough will. 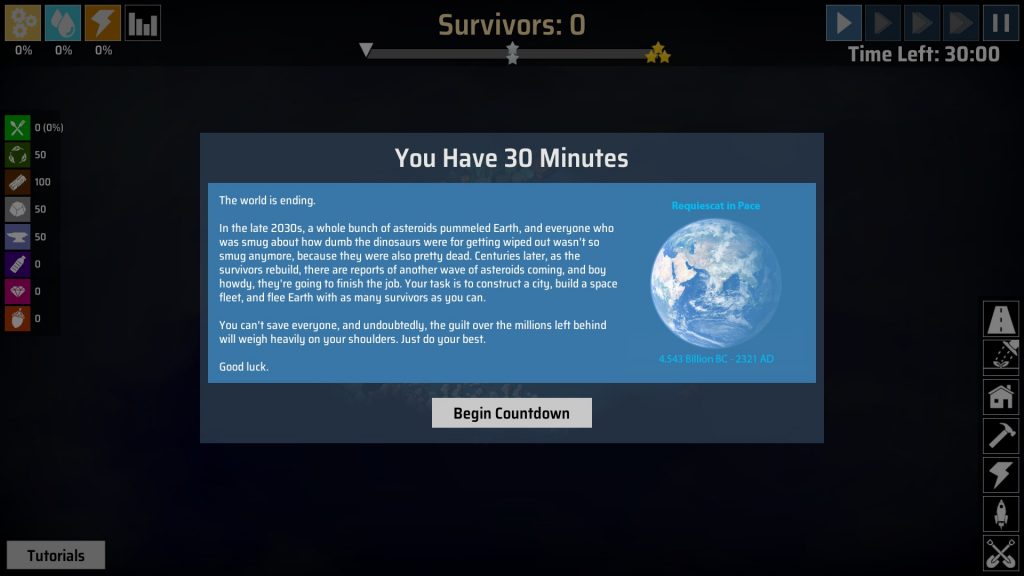 That is genuinely the premise of T-Minus 30, a post/pre apocalyptic city-building strategy game that only demands 30 minutes of your time per sitting. Developed and published by Dejobaan Games and Grey Alien Games with publishing assistance from SUPERHOT PRESENTS, T-Minus 30 is available on Steam for the very reasonable price of $9.99. For the same price as two cups of coffee, players can try (and fail) to save the remnants of humanity from the last extinction event the world will ever see — are you up for the challenge?

T-Minus 30 starts the clock as soon as players start the game. There’s a very brief tutorial in the form of steps: complete one step, and the next one will appear. Mind you, the clock is still running — it doesn’t matter if you’re playing for the first time, humanity is playing for the last time. It may take a few tries to really get a handle on what T-Minus 30 has to offer, but since each round is only 30 minutes, it won’t take long to git gud.

Before leaving the Earth, players will need to build rockets to house humanity. To build said rockets, players will need tons of resources. To acquire said resources, players will need to build up infrastructure to farm, log, mine, and reclaim. To do all that, the workers undertaking this labor must be housed and fed. Even though humanity intends to leave ASAP, players must build up their cities to grow food, house workers, provide electricity, mine for minerals, cut down trees, transport via roads, etc. All within 30 minutes of course, as the ever present threat of the incoming asteroid looms progressively nearer and nearer. This city may be temporary, but the effects will be permanent.

In most city-builders, the UI and resource chains are going to make or break the game, but in T-Minus 30 getting these factors correct was of critical importance. Setting a hard time limit makes for a frantic, frenetic pace that can throw players who like to meticulously plan through a mental loop; as such, basic, minimal UI with resource chains that are simple in flow but still complex enough to provide a bit of a challenge was imperative. Luckily, T-Minus 30 made intaking information seamless, with all collected resources and their usage rates off to one side in easy to understand color-coded boxes. Off to the other side of the screen was the build menu, which was again as simple as could be, with resource chains to match. With only 30 minutes on the clock, bulky menus would surely slow players down to the point of frustration; instead, the dev team triumphantly finessed the UI to perfection. 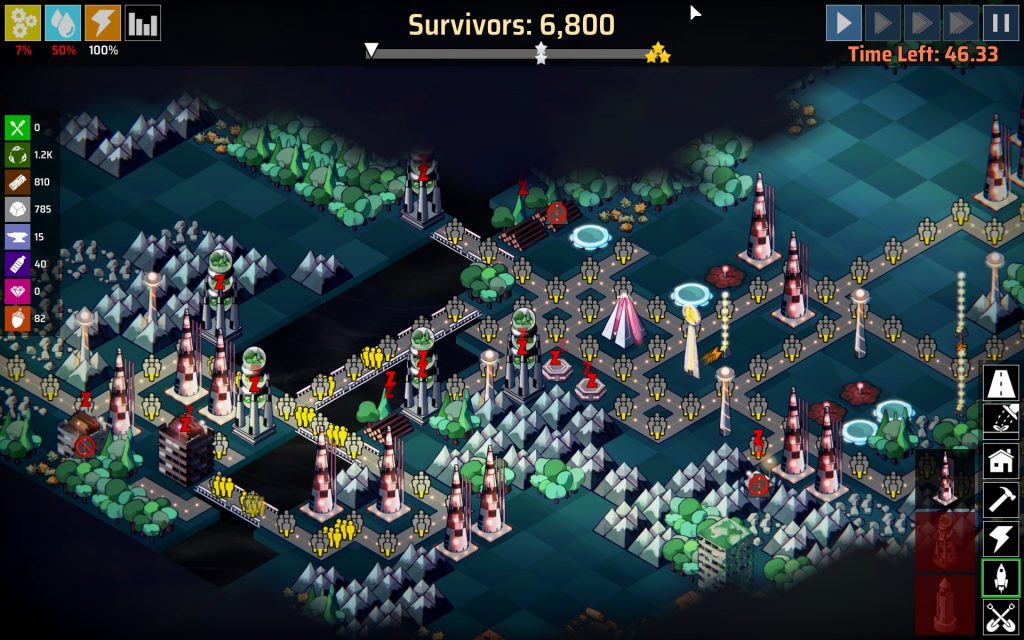 When it comes to getting boots to the ground, placing facilities and structures is again extremely simple. The basest level of facilities can be used throughout the entirety of the game, brute-forcing your way into space like they did in the 1960s with extremely low tech. Of course, this can also mean extremely low numbers, so many players will find it more effective to build higher level facilities. Regardless of what they choose, all facilities will list their requirements cleanly — must be next to roads, must be on top of a mountain, needs to be adjacent to water, etc. By fulfilling the requirements for each facility, players will eventually get everything they need to construct life-saving rockets to hurl humanity into the heavens and away from certain doom.

I don’t have many complaints at all for T-Minus 30 — in fact, this is one of my favorite concepts this year executed cleanly and intelligently — but I do kind of morbidly wish it let me know how many humans I *didn’t* save. The counter up top lets me know how many survivors are guaranteed to eject themselves from the face of the Earth, but how many am I leaving behind to meet their maker? Certainly I wanted to get as many survivors as possible, but the implication is I’m not going to save everyone. As far as I can tell, if I stop building homes, people stop coming; game logic isn’t necessarily telling me I didn’t save everyone, rather that I saved everyone who came. I feel like I would be challenged more to keep building homes if I knew how many still needed to be saved, but I also know what I’m asking is a bit morbid.

T-Minus 30 has one of the most interesting concepts I’ve seen this year backed up by balanced, frenetic, and fun gameplay. It really is quite the experience to spend 30 minutes building up your city to the tune of tens or even hundreds of thousands of people, only to watch them all jettison themselves off into the cold and desolate vastness of space in the last ten seconds. If you’re looking for a completely different city-builder that will pose a uniquely fast-paced challenge, all T-Minus 30 asks for is ten bucks and half an hour of your time.

Editor’s note: This review is based on a retail copy of T-Minus 30 provided by the publisher.