Hindsight 20/20 Review: Relive Your Past. Fix Your Mistakes 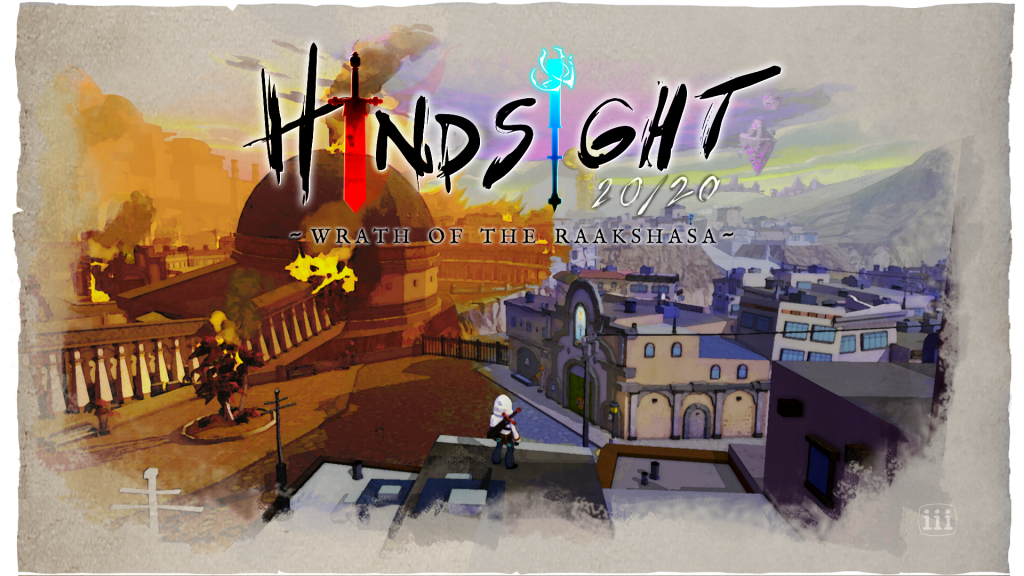 There’s a popular saying from the book of Exodus: an eye for an eye will make the entire world blind. That the cost of revenge blinds us of the beauty of this world to see. But what if I told you that sometimes the world is just an ugly place? That revenge, forgiveness, and sometimes even apathy are all but choices along the finite path. The different choices leading to some inevitable end. Hindsight 20/20: Wrath of The Raakshasa is a game that plays with this idea. A game all about the element of choice, going back and doing things hopefully differently.

Developed by Triple-I games, an indie studio made up of AAA veterans from Bioware and Sucker Punch studios, Hindsight 2020: Wrath of The Raakshasa won the PAX Rising selection during Pax East 2020 and was selected by Dreamhack for Best Action Adventure in 2019. The game is a compelling story about a one-armed warrior named Jehan on their way to becoming a legend. Though what that entails and how they go about this infamy becomes entirely up to decisions made by you: the player.

It’s About What You Choose To Do 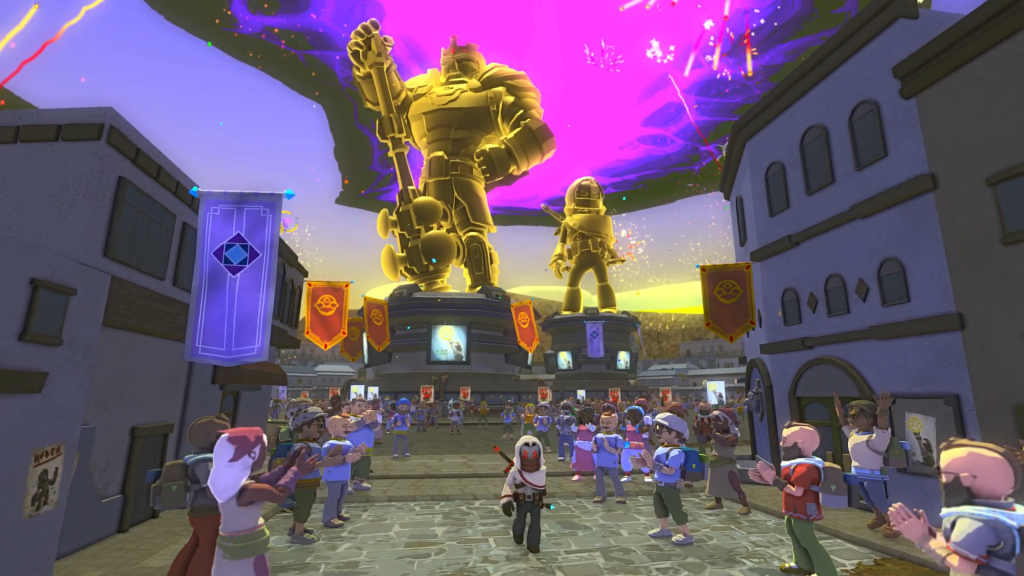 In Hindsight 20/20: Wrath of The Raakshasa, you are Jehan. A one-armed warrior from the kingdom of Champaner whose father was most recently slain by the town’s sheriff, Aurthur. There is an epidemic throughout the kingdom, turning the infected townsfolk into the Raakshasa, bloodthirsty stone-like beasts that thirst for human blood. The Raaskhaas are led by the former hero of Champaner, Sinha, who is the newly dubbed King of Gibsonia. At the beginning of the story, it’s revealed that Sinha has created a deadly device called the Trishakti, a powerful weapon capable of destroying the entire human kingdom.

From the very beginning, Jehan’s story branches into several possible directions and endings depending on what you choose to do. At first, a lot of the storyline may seem linear, but upon a second possible playthrough, it is revealed just how much your actions can impact the narrative. I can’t stress enough, the speed at which you finish your first quest, and better yet, choose how to engage in combat, in either merciful (where you don’t kill) or ruthless (where you absolutely kill) approach, determines a lot of the storylines that happen within the game.

It begins in Champaner, where, in a rush to undo the sins of the past, Jehan confronts the town guard’s leader, Aurthur. Aurthur had just slain Jehan’s father upon orders from king Marcos. How Jehan deals with Aurthur, is entirely up to the player, though keep in mind, they’re also in a race against time to find Kumar. Kumar’s story and his fate, given his recent struggle with the Raakshasa, change a lot about the game. And that’s just the beginning sequence. The more Jehan comes into his warrior role — which can be either hero, villain, or something in-between depending on player actions — the more players learn about the conflicts between Champaner and Gibsonia, with several endings about how to handle the global crises. All for a solid 4-6 hours of playtime per playthrough. 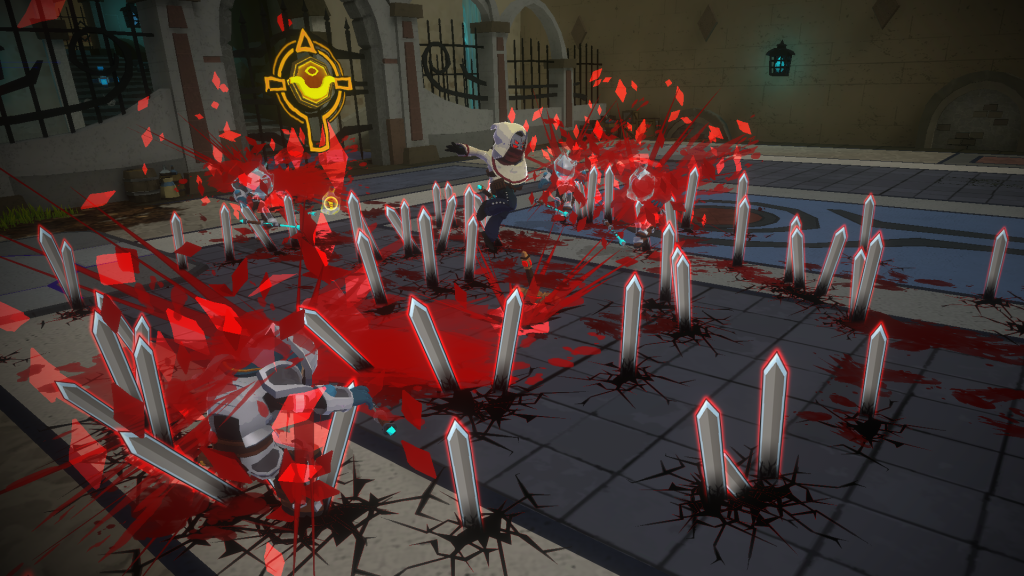 The design in Hindsight 20/20 felt a lot like the old Zelda games such as Ocarina of Time. There is a fantasy castle and NPCs to chat with, along with quests to explore. You’re also a sword and stun baton-wielding badass whose actions are celebrated or hated depending on your gameplay choices. From the architecture to the NPC’s reactions towards you, many things will change depending on how much of the town is saved or spared and whether or not Jehan follows the philosophy of non-violence that the people of Champaner celebrate.

Many of the names and aesthetics are middle eastern-inspired, though the opening sequences remind me of the first God of War with all their fire and brimstone. I mention all these examples because it’s obvious that the game’s development team has worked in this industry for a while. The style is seamless for low-key unity engine running artwork, yet also, the architecture and overall layout and design of both the levels and landscapes are highly detailed. Perhaps the only qualm had with the design is that the dialogue lettering is generic and scrolls slowly across the screen.

Now, many of the levels in the game are linear, where you’ll need to reach an end-point and solve puzzles along the way to unlock pathways. Puzzles often involve avoiding more and more complicated traps, as well as matching color patterns in creative ways. You also punch box pieces to move along faster — a convenient feature that is also sort of funny.

When exploring the town, there are historical scrolls scattered about and NPCs to chat with about the cultural histories. You can find scrolls on the floor in both cities, during puzzles, and often — in secret areas. Scrolls not only provide insight into the story. They can also unlock new special abilities to use in combat for both of Jehan’s styles of fighting. There are also the occasional pedestals upon new levels that work as solid tutorials in-game that explain everything. The UI is also really good, and the built-in guide explains just about everything as well. Overall, this is a really well-designed indie. 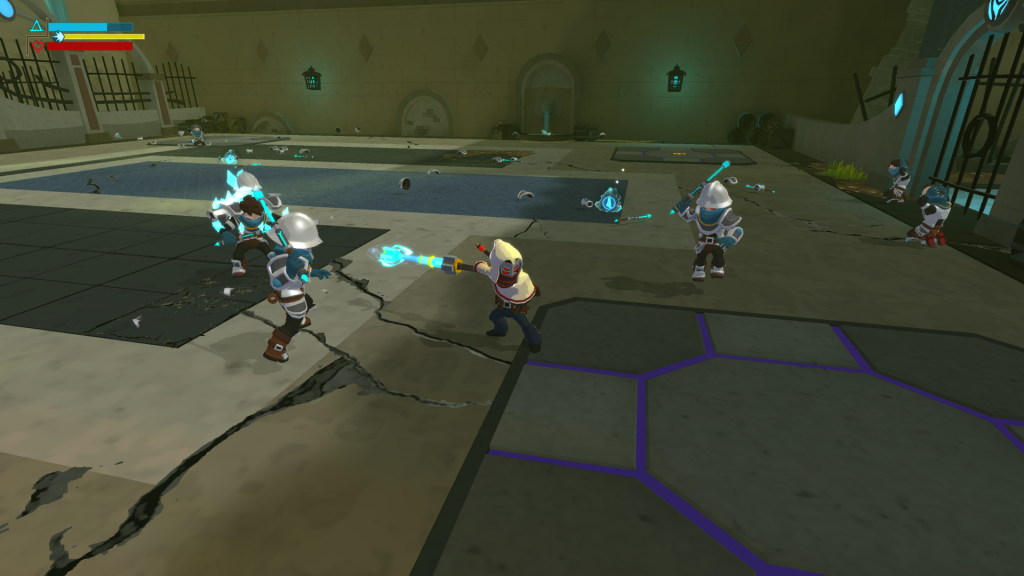 Probably one of the most surprising features about Hindsight 20/20 is its combat. While the game’s hack-and-slash mechanics are relatively simplistic, they still manage to be a whole lot of fun. First and foremost, there is no jump in this game, which keeps the action on the ground. There is, however, a quick dash that uses up stamina, which is a trait heavily featured in the gameplay. Also worth noting is the game’s complete lack of checkpoints. So if you die, you’ll respawn outside of the arena, but you’ll have to replay every boss fight from its very beginning. This is important to note — because this makes every decision you make, such as whether to use lethal or non-lethal combat, permanent for your playthrough.

Now, there are two types of combat in the game: non-lethal, which is determined by morale and is labeled under a blue bar, and lethal, which is measured by a red hit bar and is your typical HP bar. There is also a Shakti gauge, which makes you invulnerable and allows for special attacks, teleportation attacking, and projectile attacks. Activating the Shakti mode slowly depletes the gauge over time, as does doing special actions while under Shakti.

Finally, combos in battle work vastly differently depending on the style you’re using. For non-lethal, Jehan will use a stun button. One whose attacks need to chain together between enemies to execute special moves. Stun baton combat will deplete enemy morale until they surrender, leaving themselves on the ground defenseless, which can sadly impede access to some parts of the map (there was one level where a surrendered enemy cut off my only exit, and I was forced to die to reset as there are no reset checkpoints). Sword combat, while a lot of fun, is your basic hack and slash where you kill enemies and leave them in bloody pulps. The enemy AI also reacts differently depending on your attack approach, with lethal combat being met with more aggression. Getting to know your combo and unique abilities will be paramount in boss fights, especially the harder ones in the second half of the game.

After three playthroughs, I’m still having fun trying to decide the proper choices for every situation. I’d say that’s a true testament to the quality of the game’s story. Hindsight 20/20: Wrath of The Raakshasa is fantastic, with fun mechanics and a surprisingly great narrative that’ll leave you questioning what you believe in. 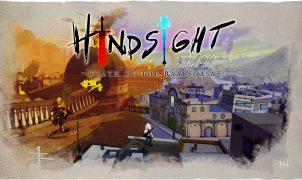