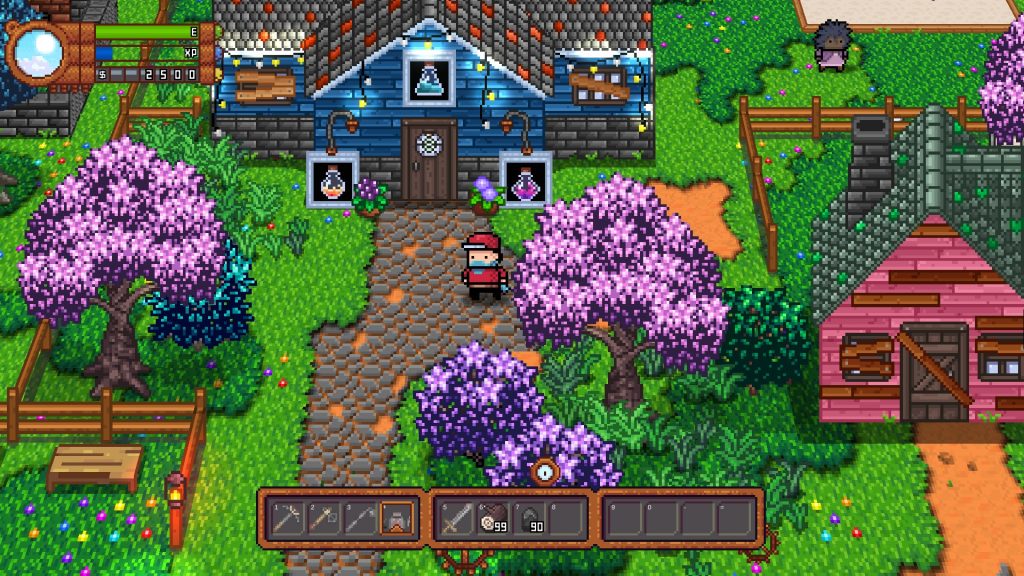 If you’re an active fan of the classic farming gem Harvest Moon, you’ve probably poured dozens of hours into games like Stardew Valley or Littlewood. If you love Pokemon, chances are the phrase “creature collecting” in the very least interests you, games like Nexomon or DokeV piquing your interest. And when the two come together, well that’s always something to take a second look at, games like Ooblets immediately springing to mind.

Monster Harvest is exactly what it sounds like — players will tend to their farms, growing a variety of crops and monsters that are then harvested. Said monsters will follow you around as you venture into caves to explore, fighting other monsters while there. The mechanics familiar to both the farming sim and creature collecting genres are there, with things like growing seasons, foraging, party members, and hit points to contend with. On paper, Monster Harvest is exactly what fans of the many aforementioned franchises are looking for.

Developed by Maple Powered Games and published by Merge Games, Monster Harvest launches across PS4, XBox One, Switch, and PC for the reasonable price of $14.44 (regularly $16.99). Released on August 31, 2021, Monster Harvest asks player to “develop your own farm, build, and customise your own house, craft your own furniture, make some delicious jams and mutate your crops to create loyal and fierce companions you can take into battle!” And although it has the makings of a fun, even addicting experience that Stardew Valley and Pokemon aficionados would immediately jump at, its current state is anything but ripe for picking.

Monster Harvest opens up with choosing from one of four available avatars and, after naming your character, arriving at a place called Planimal Point. Your uncle, Professor Spark, has invited you to this very new, very tiny town because he’s busy with his experiments and can’t be bothered to run the family farm. Naturally, you’re the perfect choice to inherit the fields — what with your zero previous farming experience and all — so you’re naturally raring to go. Spark gives you some tools and seeds and tells you to get cracking; luckily, farming is surprisingly easy, and after clearing away some branches and rocks, you’re able to till and plant like the best of them. 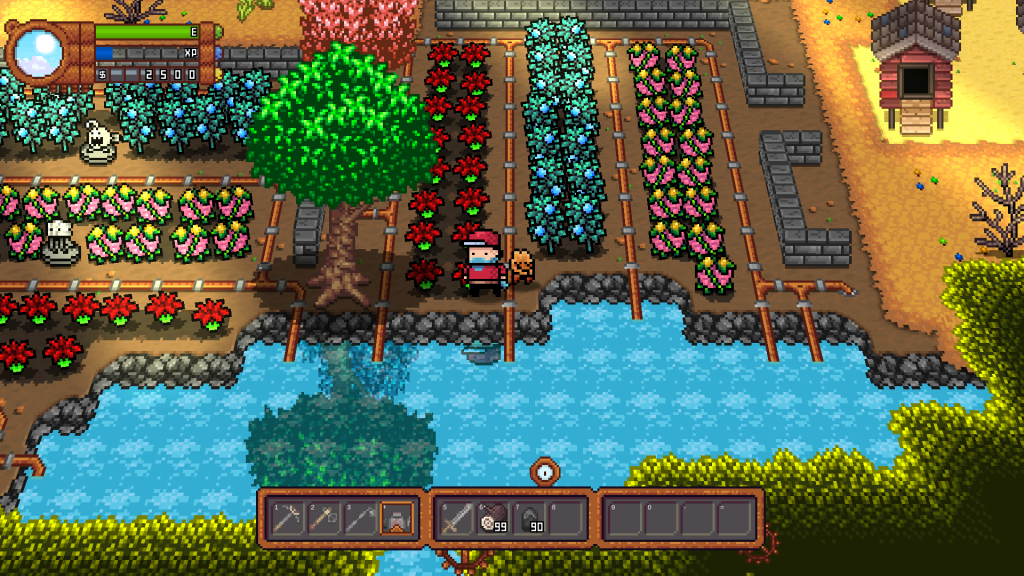 Slooooowly, you start to learn more about Planimal Point — especially planimals. As it would turn out, a mysterious slime runs rampant in the area, available in red, green, and blue varieties. This is actually what your uncle is researching, in fact, because it turns out using red slime on your crops causes plants to turn into little creatures aptly named planimals. Once these sentient beings are harvested, they become your loyal little followers, even battling others that are just roaming around freely at your command. Your uncle also informs you of the other slime properties, like green slime automatically growing your plants and blue slime turning plants into livestock. They definitely don’t have this sort of thing back home!

Of course, it’s not just you and your uncle around Planimal Point, and exploring the little town gets you acquainted with all the little people. Just like any farming sim, there are a fair number of NPCs to interact with, buying goods from their shops and giving them gifts to get on their good side. To the north of Planimal Point lies the caves, which houses plenty of planimals to battle and resources just begging to be mined. After a few in-game days, a smooth habit of tending to the farm during the day and cave spelunking afterwards becomes pretty par for the course, everything falling into a nice rhythm. 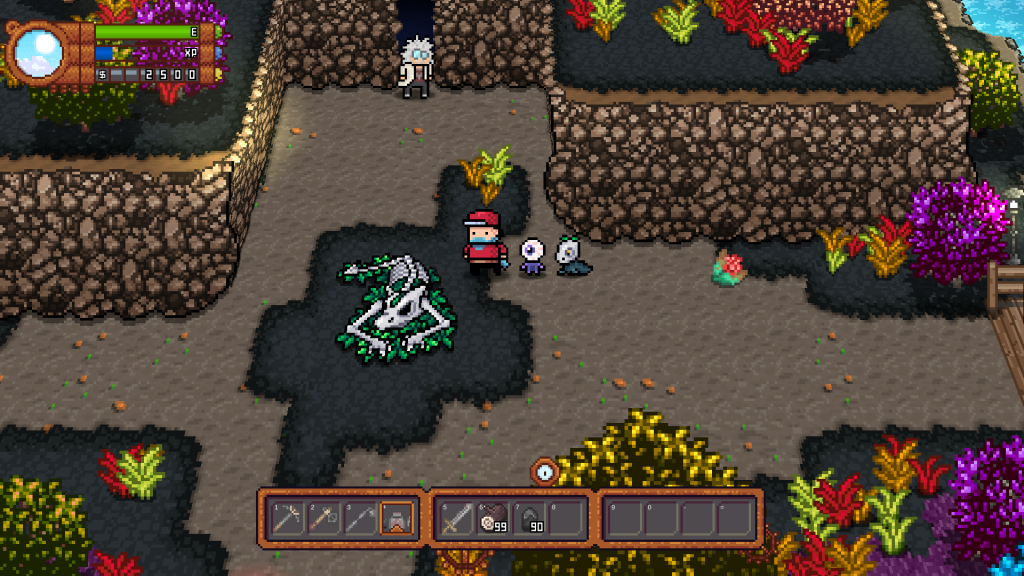 Not everything is so quaint and placid at Planimal Point, however; also to the north of Planimal Point lies SlimeCo.’s HQ, which seems abandoned at first but you can tell something is definitely going down. Every Pokemon game needs its Team Rocket, it seems, and Monster Harvest is no exception. SlimeCo. will be the baddies in this little creature collecting farm sim, and uncovering their dastardly deeds will be part of the bigger picture in Monster Harvest. In fact, you’ll even have the opportunity to fight SlimeCo.’s boss at the gym, but you’ll have to go through other NPCs first. Very, very familiar gameplay here!

When it comes to battling, Monster Harvest is a pretty standard Pokemon-like experience, with the caveat of monsters actually dying if they lose all their health. When this happens, you’ll need to collect their spirit, which can then be planted on the same crops to yield higher level planimals. At first, I found this kind of frustrating because I felt like it diminished the bonding aspect between me and my planimals, but the fact that it does play back into the whole farming aspect is what saved it. 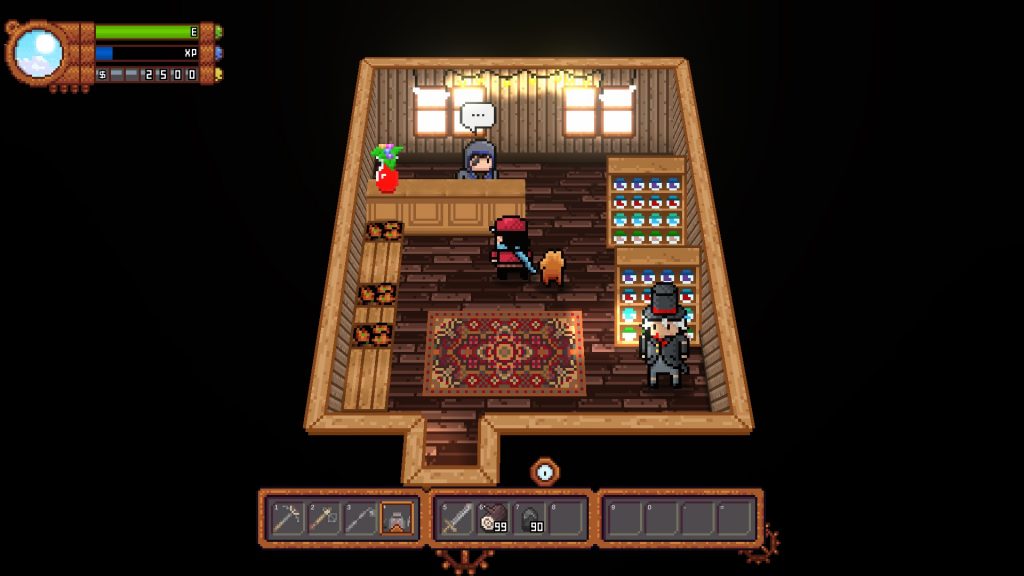 So, everything seems like it checks out — it’s a farm sim and a creature collecting game with cute pixel graphics and a charming soundtrack to boot. But Monster Harvest unfortunately falls short on what fans of both genres love about the classics. Both the farming aspect and the monster collecting/battling are pretty basic in their gameplay, quite possibly because the devs were trying to balance two very demanding genres against each other and decided paring them both down was the way to do it. The NPCs are quite forgettable, with none of them really striking me as marriage candidates (not sure if that’s even possible). They all repeat the same thing every day with slight variation on holidays, and gift giving only seems to yield discounts in the stores, not their favor. Battling was also a bit of a letdown, as all planimals seem to have just the same basic attack with two other skills but no ability to switch them out of battle, which I found particularly odd.

Where questionable design choices are one thing, bugs are quite another. Monster Harvest would have been better off having released as an Early Access title, as its plagued with issues across all platforms. I’ve run into minor issues where I glitched through furniture to more major ones where I can’t purchase things from the shopkeepers. Tiny text is also a problem, something developers seem to be married to despite Switch players constantly begging for bigger font. And while I saw quite a few players say they ran into a gamebreaking bug where they could no longer load and would be forced to start over, I am happy to report that particularly nasty issue hasn’t happened to me. Yet.

Monster Harvest is part of a growing genre that tries to combine farming sims like Harvest Moon with creature collecting like Pokemon. Unfortunately, by trying to cram as many different mechanics as possible into one tiny title, Monster Harvest pared them down to their basest level in an effort to offer a nibble of many things but never a filling feast. As for the bugs it launched with, those will soon be addressed with promised patches, but when it comes to gameplay, Monster Harvest still feels like it needs a little more time to grow. A lot more depth on all fronts will turn this garden variety game into a bumper crop; with enough time, I have faith the developers will find the balance Monster Harvest needs to achieve greatness.

Full disclosure: This review is based on a retail copy of Monster Harvest provided by the publisher.

The Sorrowvirus: A Faceless Short Story Review: Immortality Isn’t All it’s Cracked Up to Be   The thought of immortality crosses all of our minds at some point. When…