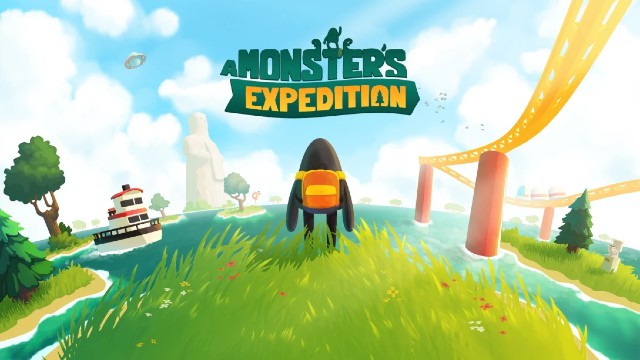 At some point during my time with A Monster’s Expedition—I fell asleep. To be honest, it happened several times. My day had been stressful, and I just wanted to relax and solve puzzles. I had been staring at the screen for probably ten minutes, stuck. My little monster guy sat on the shore of the island, and the camera zoomed out. Soft piano music blended with the gentle sounds of waves caressing the shore…and I was out.

This sounds bad, but it isn’t. A Monster’s Expedition exudes peace and calmness. Its presentation wraps itself around you like a warm blanket. You can’t help but feel relaxed. This zen-like presentation extends to the gameplay. Who could ever be stressed touring a museum? Indeed, the journey is a museum tour, hence the subtitle—“Through Puzzling Exhibitions.”

I’ve no idea what happened to humanity, but we’re nowhere to be found. If I had to guess, we did something stupid. Either way, the monsters who now inhabit the land have created a museum dedicated to humans. This museum is strewn across hundreds of tiny islands out in the middle of the ocean. It’s not an ideal spot for a museum, but it does make for excellent puzzling.

The Puzzling Journey for Knowledge Begins 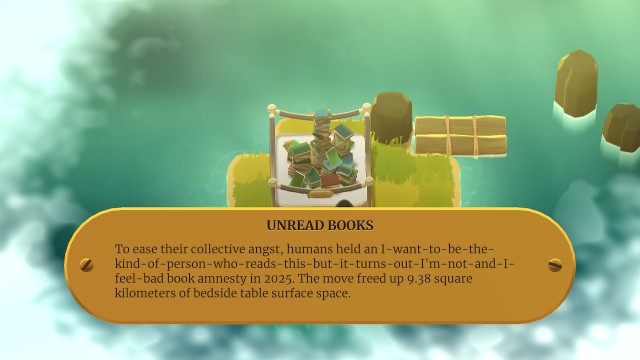 This design forms the core of A Monster’s Expedition’s gameplay—use the trees on each island to form bridges to nearby islands so that you can reach new exhibits. Your monster can knock over any tree it can reach, turning it into a log that can be used to form a bridge. Unfortunately, the monster also has stubby legs, so it can’t jump very far. This means that the bridges you form must be properly aligned. If you’re trying to travel east or west, the logs must be oriented horizontally; if north or south, vertically.

This mechanic is incredibly simple, but there are a few rules to keep in mind. If you’re facing a log that is perpendicular to you and you push it, it’ll roll until it hits something or falls into the water. If it’s lined up in front of you, you’ll push it end over end. Rocks complicate matters, but you can climb on a tree stump to get on top of them. You can also push logs onto them if necessary. If you break a tree and the log falls perpendicular to a log next to it, it’ll roll end over end, essentially jumping a space.

The game is built on a grid of squares. Small logs are one square wide; big logs are two. The larger logs can’t be rolled end over end due to their size. If you put a log in the water and then push a log with the same orientation onto it, it’ll combine into a raft, which you can cross from any direction.

Your Imagination is the Only Restriction 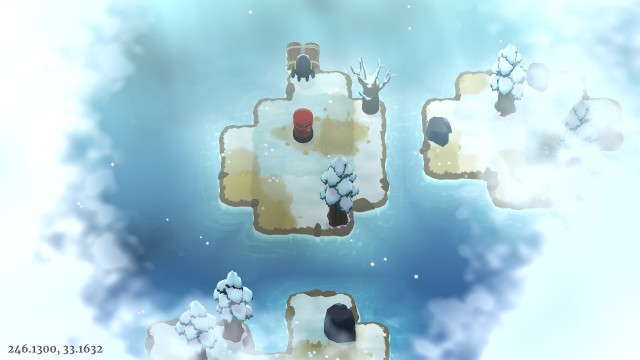 A Monster’s Expedition is described as “an open-world puzzle adventure.” Indeed, your movement is restrained only by your ability to traverse the islands. There’s no direction that you must follow. There are no time limits, no lives, no enemies…it’s just you and the puzzles. There’s no direction whatsoever, and that’s one of the game’s strengths.

Unlike in most puzzle games, your ability to get stuck is minimized by A Monster’s Expedition’s open design. If you can’t figure out how to leave a particular island…then go somewhere else and come back later. Red mailboxes allow you to instantly warp to any other mailbox you’ve discovered, so there are plenty of options for exploration.

Speaking of which, the rafts play a key role in exploration. If you make a raft near a rock or a fallen log, you can push off it. Your raft will travel in a straight line until it encounters another rock or island. The islands are intricately connected with one another. You might make a raft on an island on the west side of the ocean, push off…and find yourself all the way on the other side of the world.

The game’s lack of direction is also a factor in its puzzles. It might feel like you generally know where you’re trying to go, but that’s an outright lie. You might think you need to build a bridge northward, but you actually need to build a raft in the east. There’s never any indication that you need to go in a specific direction, and some islands connect to multiple islands, even if that seems literally impossible. Countless times I thought I had completely solved an island only to come back later and—lo and behold—another pathway was right there in front of my not-so-smart face. 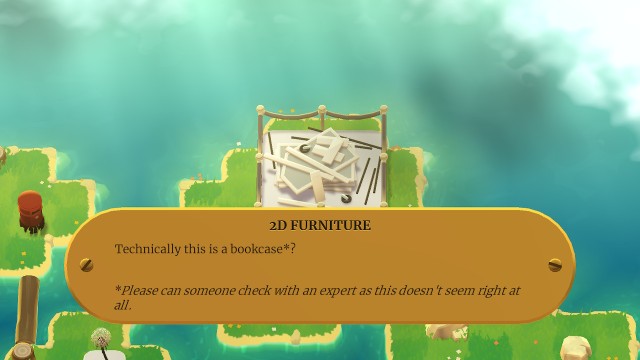 A Monster’s Expedition’s ingenious exhibits add a delightful reward aspect to the gameplay. Monster historians and scientists, much like their human counterparts, can sometimes only make educated guesses about some of the objects they discover. I don’t know how the developers came up with these exhibits, but they are wild and hilarious. For example, one of my favorites is the “Wink Emoji Dots” exhibit. It reads, “Disgruntled human grammar prescriptivists became so outraged over ‘mistreatment’ of the semicolon that they attempted a punctuation coup. Their main goal was to stop other humans from referring to it as ‘those wink emoji dots.’” Also, I might be a disgruntled human grammar prescriptivist. Who knew?

Every exhibit is as unique and hilarious as the one before it. This also helps offset any potential puzzling frustrations. If these exhibits don’t make you laugh…I don’t know. You might not be alive. I don’t make the rules. Anyway, it makes it even more rewarding to read one of these once you’ve completed a difficult puzzle.

I don’t know how many islands and exhibits are in A Monster’s Expedition; I reached the end (the monster leaves on a ship, much like how he arrived), but there were still a ton of foggy areas on the map. When you reach a new island, the fog dissipates in that area. I know I missed a bunch of islands and probably a few raft paths as well. I haven’t managed to uncover any more since writing this review, which doesn’t make me feel great about myself, but man, some of these are hard! 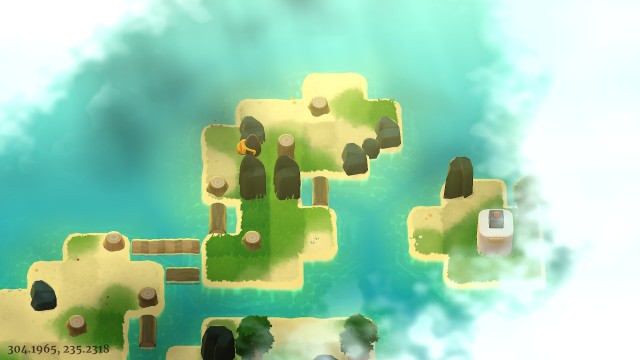 And therein lies the one potential flaw in the game’s design. After you’ve explored a large chunk of the world, the remaining puzzles become incredibly difficult. There’s no hint system and, if you recall, it’s not possible to determine the number of pathways from any island. So, you might end up trying to make a bridge to an island that’s impossible to reach from the island you’re on. There doesn’t seem to be an obvious way to know for sure. After you beat the game, an icon indicating exhibits you missed appears on the map, but that’s only so helpful. After all, reaching a specific exhibit might require a bridge, or it might require a raft from the other side of the world.

That’s really the only hint system the game needs. Just let me know on which islands I should focus my efforts, and I can do the rest. I don’t mind getting stuck, but I also don’t want to waste hours spinning my wheels. There’s still so much to see, but I honestly doubt I’ll progress further without a little assistance. Yeah, I can look it up online, but the game’s open-ended nature makes that challenging as well.

A Monster’s Expedition is a brilliant little puzzler. It gets incredible mileage out of a simple mechanic and manages to use it in unexpected ways. The game’s zen-like presentation, open-ended exploration, and sense of humor create a relaxing environment that soothes away the frustrations found in other puzzle games. I do wish I had a little assistance in the late-game portion, but maybe I’m the only one who needs it.