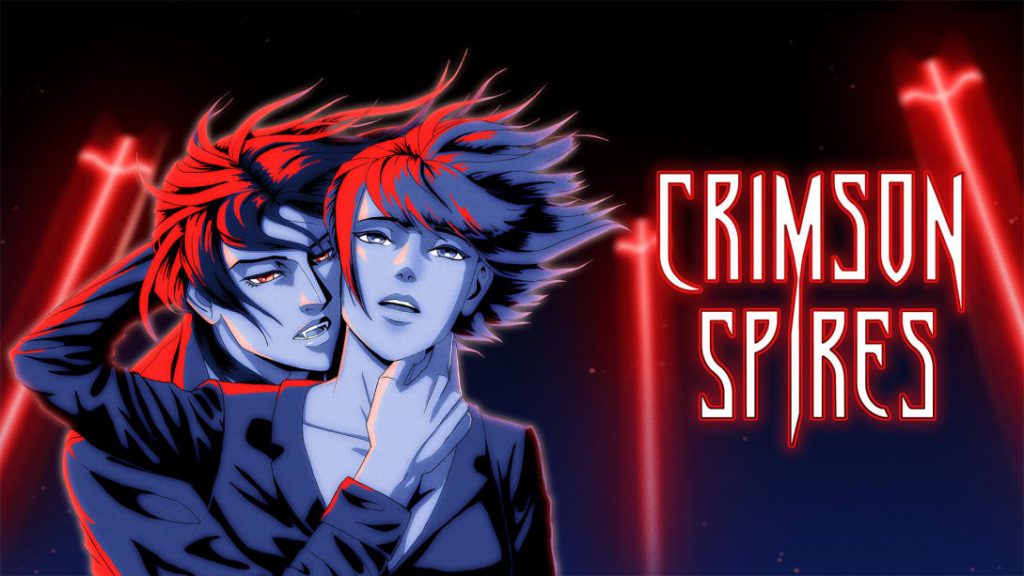 Visual novels are, by and large, a uniquely Japanese phenomenon in the world of video games. Of course, as someone who primarily plays video games that came straight from the Land of the Rising Sun, I have no issue with this whatsoever–in fact, I welcome it–but it has led me to wonder what visual novels from other parts of the world, the Western part, particularly, would be like. Now, that isn’t to say that I’ve never played non-Japanese VNs before because I have, but they’ve nearly all gone out of their way to mimic the source material as closely as possible (usually to great effect). But, it seems as though I’ve finally gotten the chance to play a VN that feels incredibly Western–and that’s all thanks to Crimson Spires.

You know those cheesy romance novels that are typically marketed towards middle-aged women? The ones that have a buff, shirtless dude on the cover? Crimson Spires is basically one of those plus a healthy helping of action and horror elements. That’s not to say that it follows this formula to a T, because it definitely doesn’t, but it definitely has some similarities. You might think that that’s an insult, but it’s not. I’ve never even so much as thought about using something like that as source material (and I can’t even say for certain that the devs did!) but, now that I can see the parallels, I’ve got to say that I totally dig it. 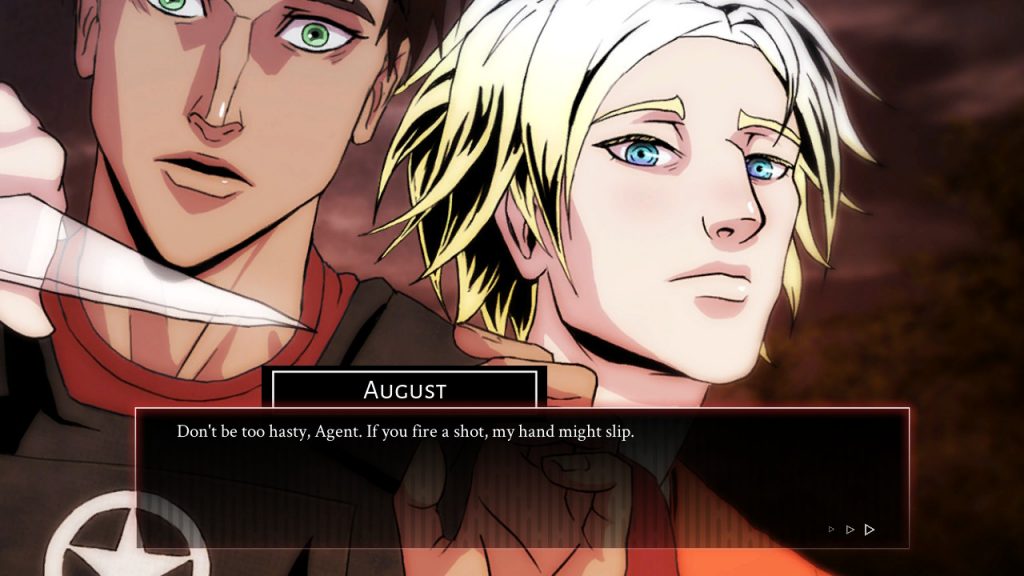 Things might seem intense, now, but just wait until the Contingency!

Crimson Spires follows the story of Erika Wright–a no-nonsense FBI agent–who, while hunting down an escaped serial killer dubbed the Heartbreaker, finds herself trapped within the backwoods city of Bataille (along with the Heartbreaker himself, no less) due to the occurrence of an event known as Contingency–which saw the entirety of Bataille being surrounded by an impenetrable barrier of glowing, red pillars. After several months of staying in Bataille, and the entirety of the Bataille Police Department dying while trying to blow up one of the pillars, Erika eventually finds herself becoming the town Sheriff. That should be easy for an FBI agent, right? Well… not so much. Bataille also has a little vampire problem–the problem being that a family of vampires essentially controls the town. And it only gets worse from there!

Crimson Spires‘ story hits the ground running, and it does a great job of hooking the player from the start (that was the case for me, anyway). Within the first 30 minutes, the player is thrown between genres–with the game quickly jumping from action/suspense to horror/mystery–and the game is incredibly effective at intertwining things. Crimson Spires’ shorter length also works to its advantage in many ways, as the brisk pacing of the story keeps things consistently exciting. There’s always some kind of mystery or event just around the corner, and you never have to wait long to see what it is! 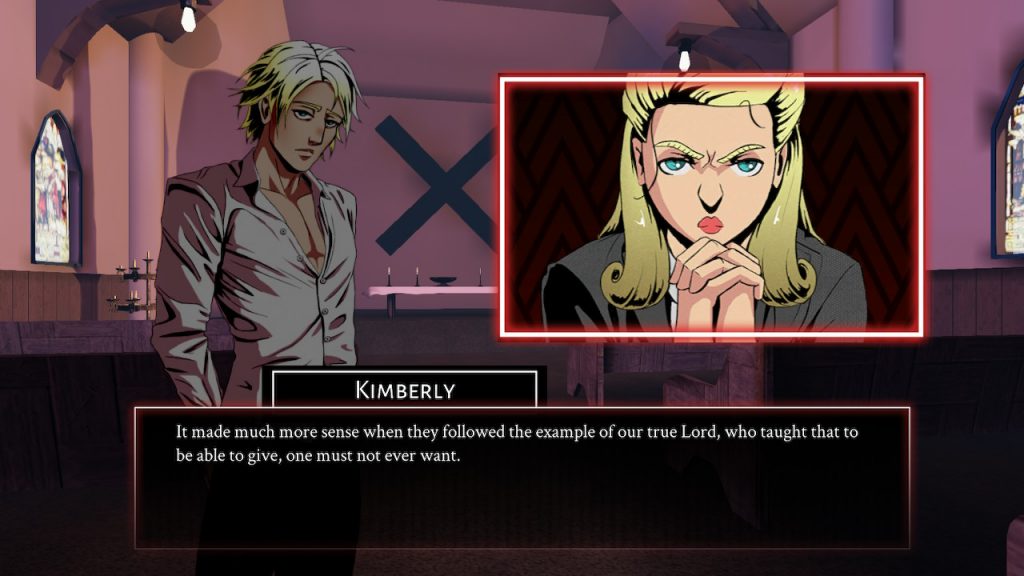 Crimson Spires also does remarkably well at throwing in instances of real-world problems into its narrative. While the game undoubtedly keeps both feet planted in the realm of fantastical (and sometimes horrifying) fiction, it does so while speaking about issues relating to social injustices and religion. I’m not saying that these elements are in any way VN necessities because they aren’t, but I do believe that they can be added in a way that is tactful and appealing for the reader. It’s easy for things to become muddled or hamfisted when speaking on tricky real-world issues–Crimson Spires, however, not only does so with grace but also while (generally) putting an interesting fictional spin on things and never letting any of it get in the way of the main story. 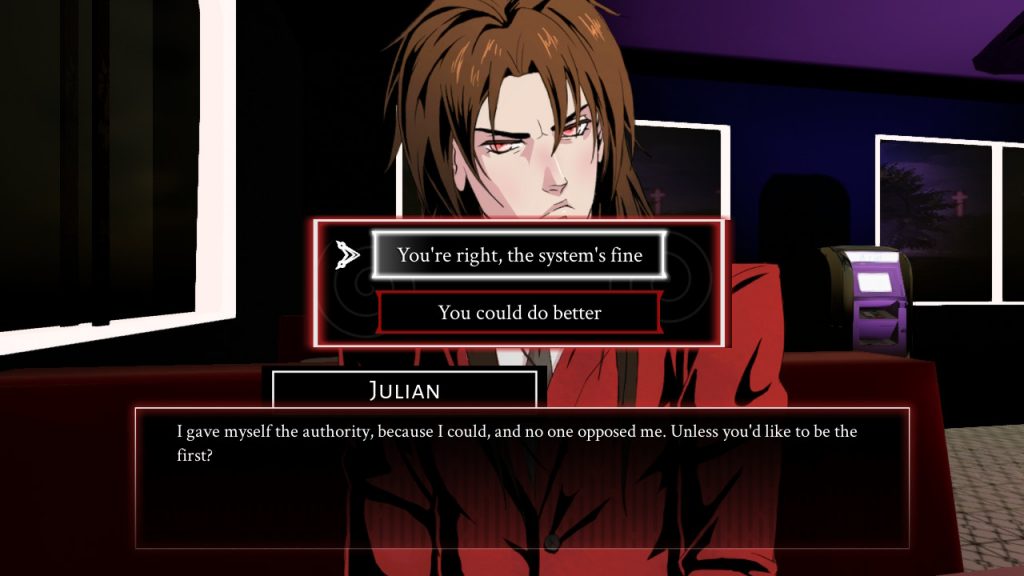 Being a visual novel and all, you might expect Crimson Spires to occasionally throw players in situations where they have to make a choice. …And you would be absolutely correct! Generally speaking, there are two types of decision-making events that may arise during gameplay. The first of these two events surround the dissemination or collection of information. These typically don’t have an outright effect on gameplay and can be partially skipped, but usually provide interesting info regarding whatever may be going on. The second, and most important, decision-making event surrounds Erika’s love life. These are also quite simple and straightforward–you’re usually only given two options to pick from–but they still serve their purpose just fine.

Despite utilizing a traditional affection mechanic, Crimson Spires doesn’t shoehorn the player into any one specific route. Rather, there will come a time when Erika needs to choose a partner for… well, let’s just say it’s something important. While most VNs would stick you with whomever the protagonist is closest to, Crimson Spires straight-up lets you pick who to partner up with for the rest of the game. Personally, I’ve never been wild about giving the player this much freedom when it comes to choosing routes (having to work for it is more fun), but I can at least credit the game for not promising a happy ending–those affection points aren’t being collected for nothing!

Take a Walk in my Shoes 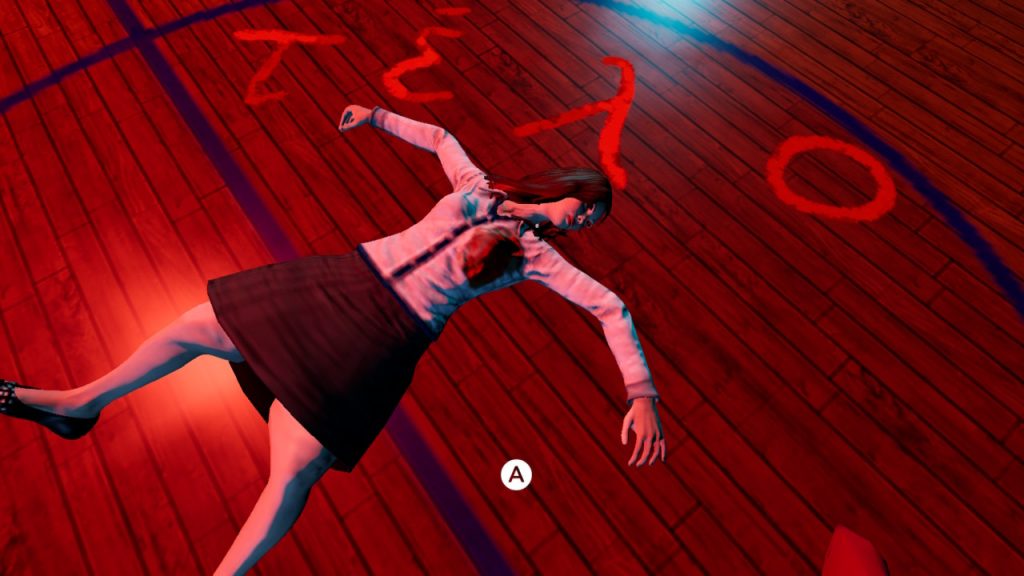 The 3D segments are an interesting choice but feel a bit jarring.

While Crimson Spires may be a visual novel through and through, it does contain something that most others in its genre don’t–3D exploration segments. During key points in the game, players will be able to take control of Erika and move her around in whatever location they might be in. While a neat idea in concept, these “exploration sections” of the game honestly don’t mesh too well with the otherwise traditional VN mechanics. There’s typically very little to do, and the environments themselves aren’t exactly what you’d call appealing. Fortunately, these sections are few and far between and do little outside of temporarily disrupting the flow of the narrative from time to time.

Crimson Spires isn’t quite like any VN that I’ve played before. It’s familiar in form, but, thanks to a heavier Western emphasis regarding its narrative, feels fresh and new in many ways. Whether you like action, suspense, or romance–or just want a new VN–I highly recommend taking a trip to Bataille. It’ll be so good that you won’t want to leave! …Not that you’ll have much of a choice in the matter.

Full disclosure: This review is based on a copy of Crimson Spires given to Hey Poor Player by the publisher.

A Vampyr Surgeon? This Won’t End Well…     Between the black and white extremes of good and evil there are many murkier shades of gray, which are only…