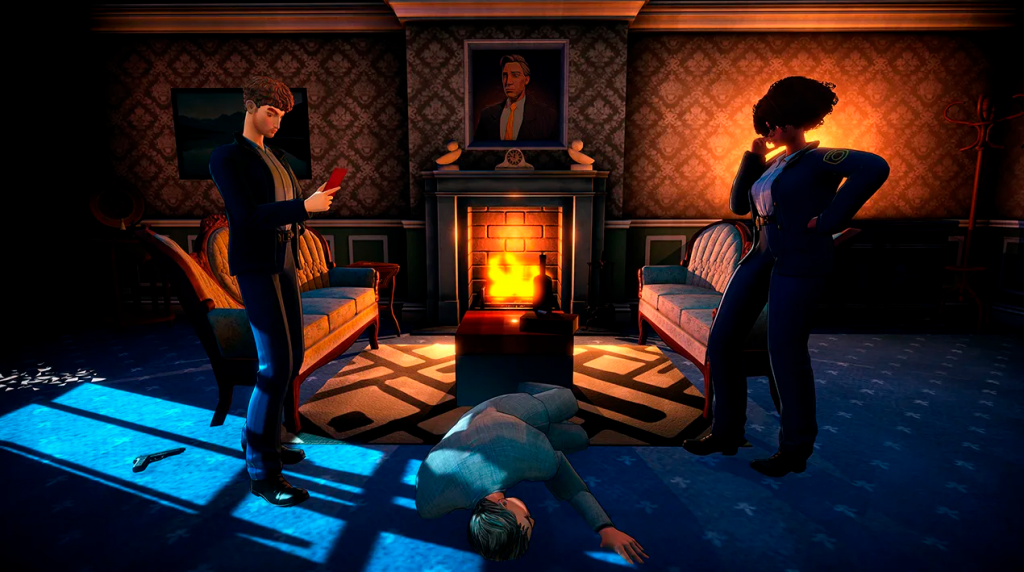 Welcome to the District Crime Agency, Cass! You received top marks at the academy, so we all have high hopes for you here. As the newest recruit, it’s your job to stick around your partner, Nate Huston, and solve murders using the Murder Mystery Machine. What’s that? He doesn’t want a partner and prefers to work alone instead? Too bad — this is your assignment, and it’s your job to ensure that cases not only get closed, but to keep an eye on Nate. Or else.

So begins Murder Mystery Machine, a detective story with a deeper mystery hiding under a whole lotta bodies. Developed by Blazing Griffin and published by Microids, Murder Mystery Machine was originally available as a mobile title and has since made its way to consoles and PC. The name of this game is to use that mapping technique detectives like to do with the pictures and red string and connect all the dots to lead them to the perpetrator. Can you make the connections and bring the killers to justice? 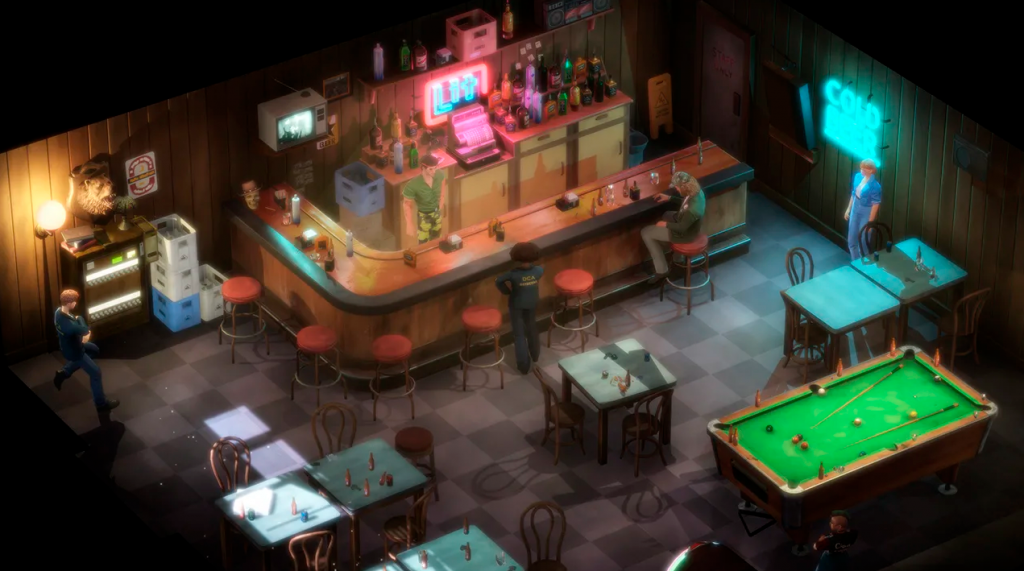 Murder Mystery Machine has players taking on the role of Cass, a newly-minted detective at the DCA, who, along with her partner Nate, needs to solve a series of murders. With eight different cases that feature three to five distinct dioramas to investigate and explore, players will interrogate suspects, gather evidence, and find leads in an effort to mark the murderer. Using the mind mapping mechanic to draw connections between persons of interest, evidence, and testimonies, the detectives can figure out the who, what, when, where, why, and how of any case that lands in their laps — and quickly, too!

Once Nate and Cass determine their next location to investigate, Cass will boot up the Murder Mystery Machine, which will take them there directly. Once there, they’ll often end up giving a dead body a once over, followed by speaking with a person of interest. After learning all they can from that person, the small diorama will open up with points of interest in the environment — clues pertaining to the case. A torn note here, a forgotten wallet there, and soon the pair will piece together what transpired in the area. 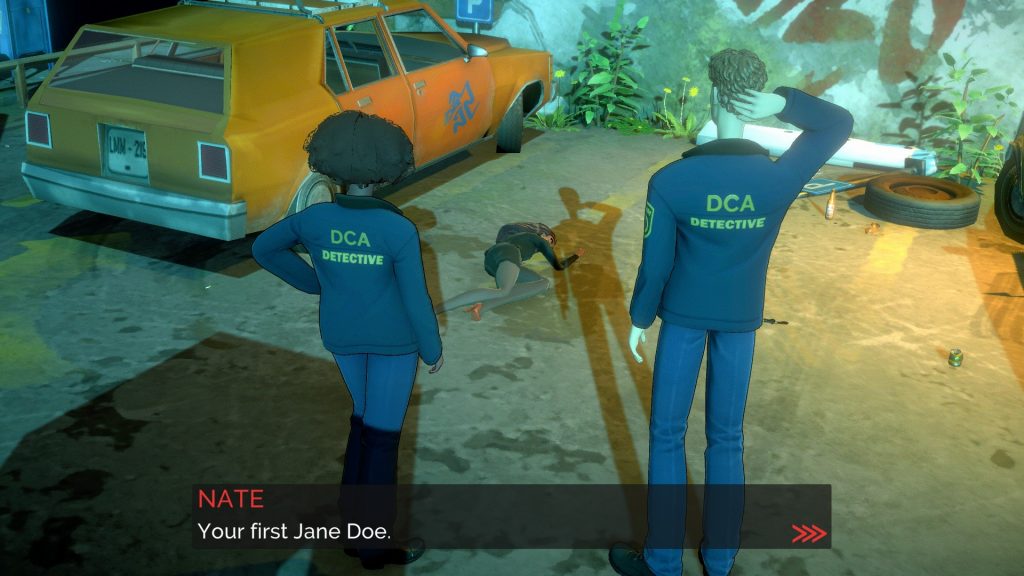 After collecting as much evidence as possible, it’s time to connect the dots — literally. Players will bring up a map of all collected evidence and talking points and connect them together with red string. Connecting the right ones together will yield new dialogue options with both the persons of interest and between Cass and Nate, which in turn will yield more evidence. Be sure to connect as much related evidence together in an effort to determine what really transpired at any given location!

While I really love this mechanic, I think it could have been done better. For one, the text is insanely small, which makes playing on docked mode decidedly unfun. You can of course zoom in to read more clearly, but when piecing evidence together from, say, the top left of the screen to the bottom right of the screen, it becomes pretty difficult to move around unless you’re completely zoomed out. And while it’s marginally easier to read on handheld mode, this isn’t true when the cases get more in-depth with a multitude of evidence to parse through. It’s still a fantastic concept, I just wish maneuvering around the mind map was easier. Also, missed opportunity for it to be touch-screen capable on the Switch — a lot of the gripes I typically have when it comes to point and clicks on console could have been avoided by implementing that feature. 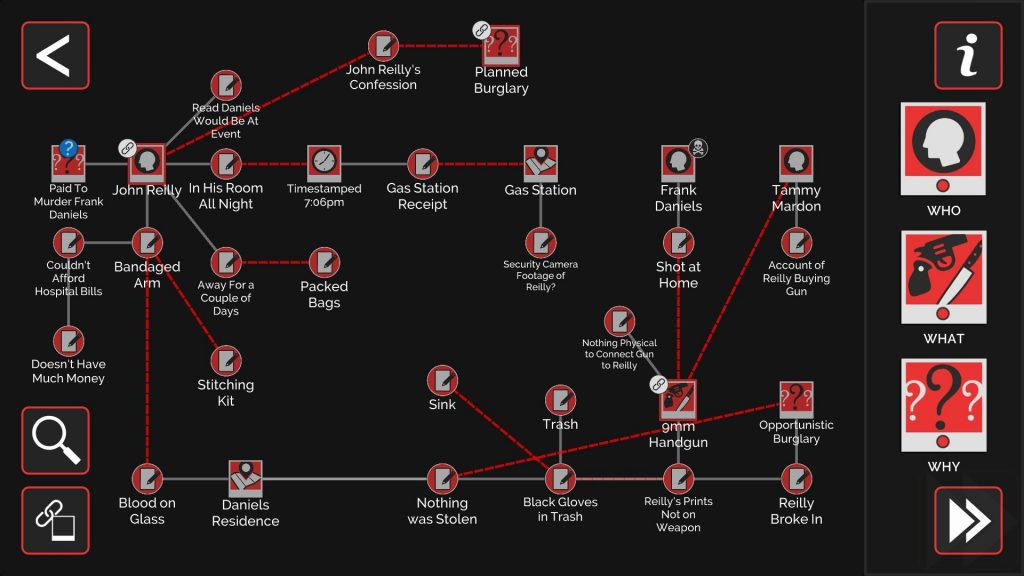 It’ll become very clear that the mind map is the key feature of Murder Mystery Machine, where you’ll need to find the answers to a set of very specific questions, like who the killer might be, what weapon they used, and why they killed the victim. This often means just dragging connections from some tidbit like “Mark knows Frank” to both the Mark and Frank nodules to open up some new dialog. I found it frustrating that a lot of evidence required links to very obvious or redundant things until I recognized that it was the detectives trying to strengthen their case, but it can get cluttered really quickly as the case goes on. There’s also a hint system, but you’re penalized for using it at all in your final grade (the best you can hope to get will be a B).

Why do grades matter, you ask? You’ll need to get an A+ on all cases if you wish to unlock one Cass’ and Nate’s outfits, which can be changed at the locker in their office. They each have four outfits, but they’re purely cosmetic and don’t further the story at all. Another small frustration with the outfits is that most of them can only be unlocked after you’ve beaten the entire game, which doesn’t make a lot of sense to gift something to players once they’re ready to put it back on the shelf. 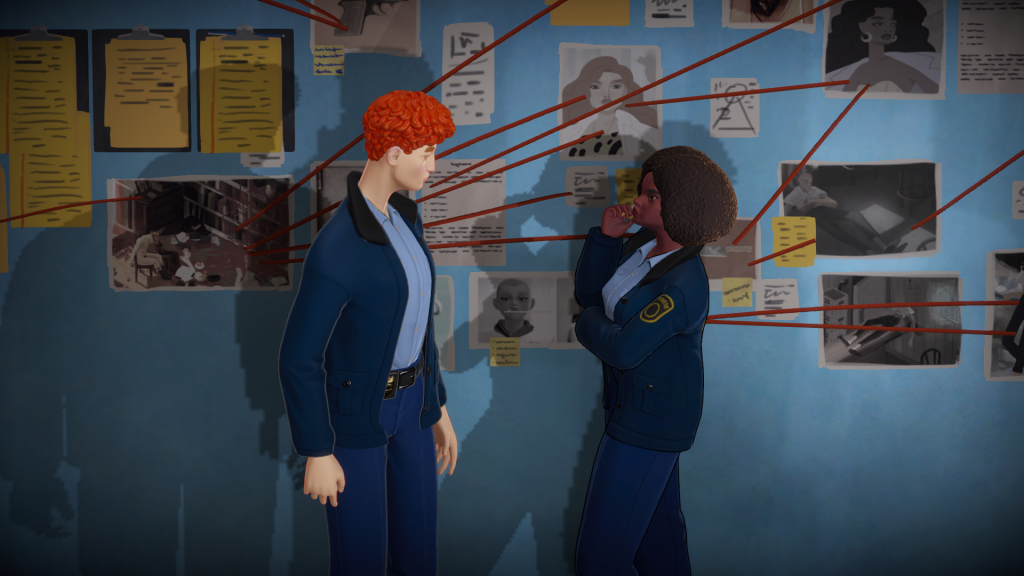 As for Murder Mystery Machine’s cases, they’re all murders so there’s a bit of excitement in the subject matter, but the pacing doesn’t truly ramp up until about case 4 or 5, at which point there’s clearly something more sinister afoot. I don’t want to give any spoilers away, but just know that if you’re struggling to get through the first few cases, it does pick up after some time. And since it’s a fairly short game with not a lot of filler, it’s pretty easy to get to the good stuff after a few short hours.

One really interesting facet about Murder Mystery Machine is that, at the end of each case, Cass will be asked some questions about the case that deal with morality. Do you arrest the killer and let their elderly mother become a ward of the state and die a lonely death? Do you cuff someone who sells stolen goods or pay them to become a confidential informant? As Nate likes to say, there isn’t a right answer in these situations, but a choice must be made. I loved the morality tinge to these detective stories, as it’s not something we often see in these types of games.

Murder Mystery Machine utilizes a fun detective mechanic that makes you really feel like you’re connecting the dots, but there are a few technical issues that brought down the experience ever so slightly. With that being said, it’s one of the few detective games that actually feels like you’re piecing the puzzle together instead of being lead to the correct answer, so be sure to get your brain ready for some extreme teasing. If you love murder mysteries and want a fascinating story with a lot more going on underneath than initially meets the eye, booting up Murder Mystery Machine is a no-brainer.

Editor’s note: This review is based on a retail copy of Murder Mystery Machine provided by the publisher. 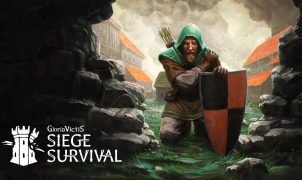 Starvation, Sickness and Sieges   In these dire times we often feel the need for some blissful escapism from the cruel realities of life, and Siege Survival: Gloria Victis…