Road 96 Review: Life is a highway 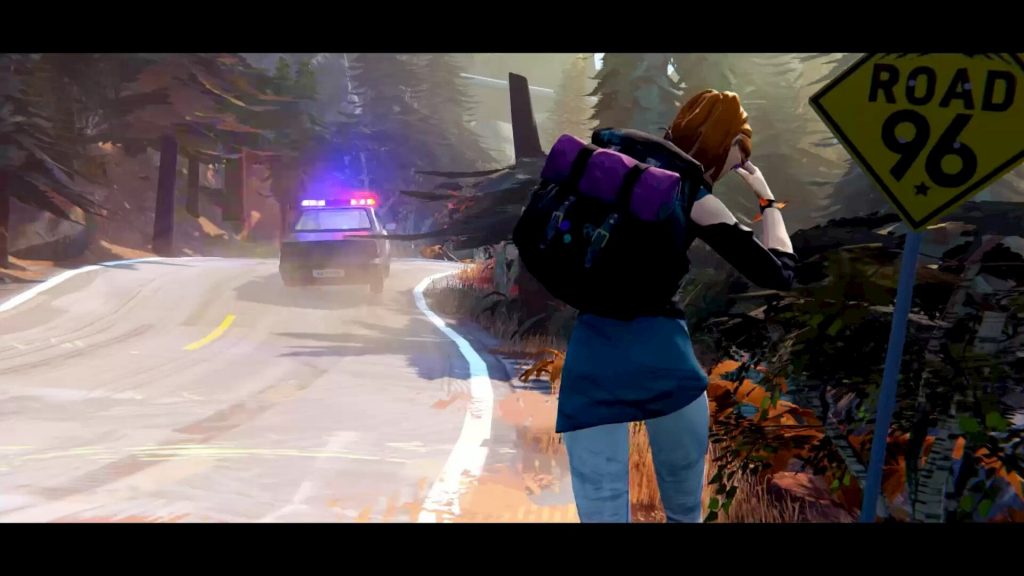 Okay, so maybe Petria isn’t all that it’s cracked up to be. But in Road 96, it’s a world full of stories worth listening to despite the fact you’ve got one foot out the door for the entirety of your (short) stay. Developed and self-published by Digixart, Road 96 tells a tale as old as time, pitting the infallible hope of the youth against the stagnant, even corrupt systems of their elders. Available on PC and Switch for the appropriately priced $19.96, Road 96 asks players to “hitchhike your way to freedom in this crazy procedurally generated road trip;” with escape your only shot at freedom, all roads lead away from home in this surprisingly deep adventure narrative game. 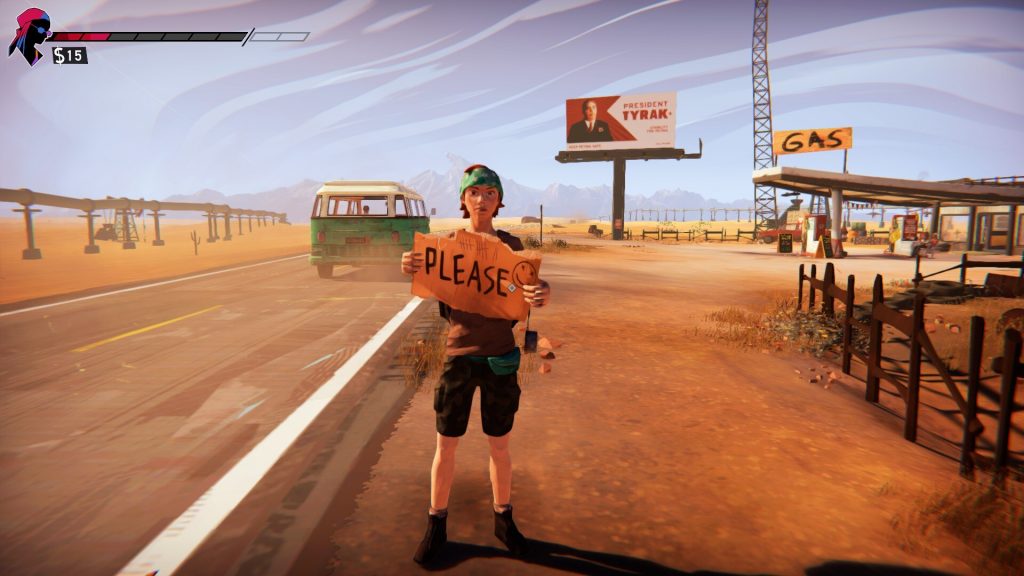 Road 96 doesn’t give you much context before dumping you right into things; in fact, this review has already given you waaaay more backstory in two paragraphs than you’ll get in the first hour of gameplay. You’ll start out as a teenager on the side of the road, with something very interesting happening at whatever’s along the way. I wish I could be more specific, but it’s different for everyone — with one of seven possible openings, players will all stumble into their journey differently, its path evolving randomly like that afterwards. The developers are referring to this as procedural generation, and while that’s true in dev speak, it’s not as expansive as some players may be thinking.

For example, let’s say players meet Sonya on their first stop, then Zoe on their second. John may come next, then Jarod. It all depends on what way players decide to travel forth, such as hitchhiking or hailing a taxi, that will help determine who you meet next along the way. Certain characters will only appear if you call a cab, while others are more likely to spawn if you hitchhike. Once that’s been determined, one of 4 – 7 scenes will occur depending on where you are in your journey and who you’ve seen before. 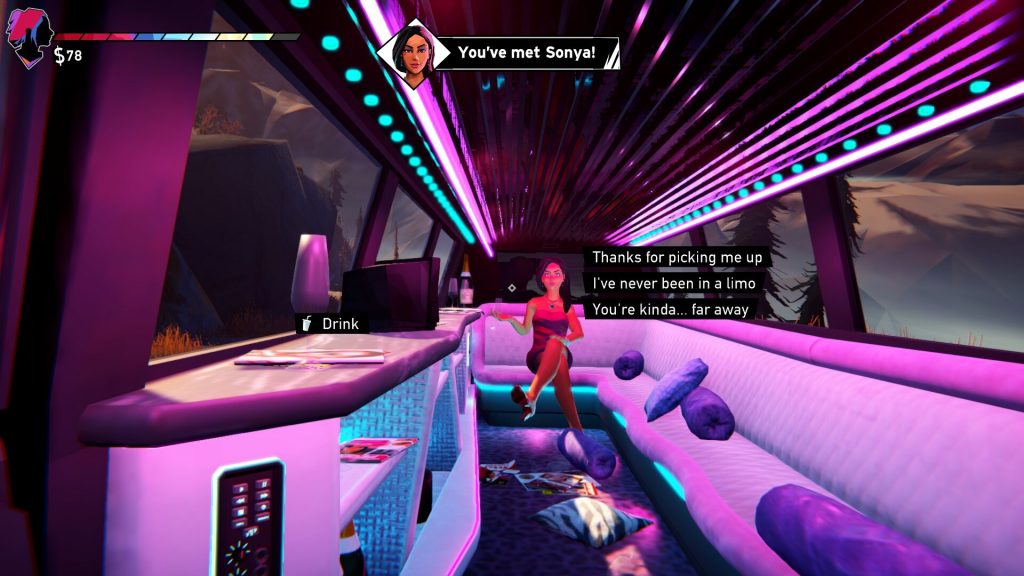 But like, why even travel at all, you may ask? In case you didn’t piece it together, Petria isn’t exactly booming with opportunities. The entire country is slowly decaying, gripped by a greedy leader more concerned with what he can squeeze out of citizens instead of giving back to society. With few options, teenagers would rather chance the border and make a new life for themselves in a neighboring country than wither away in the blisteringly oppressive sun of Petria; unfortunately, freedom isn’t a guarantee. Plenty of teens are caught and sent to the mines to work, while others are whisked away from the wall in bodybags. Despite the risks, teens still flock to Road 96; these crossers will brave the odds or die trying.

At first, I wasn’t sure how I felt about failing my first run, but after starting up my second, I saw the brilliance in try, trying again. You see, throughout the journey, characters will reference teens who fail crossing the border, and it didn’t hit me until later that *I* am the failed crossers. My next run actually was a success — I was able to literally climb a mountain over the border — and on my third run, characters mentioned my daring escape. So even if you fail, your past character lives on in the lore of the land, which is actually a fantastic way to incorporate previous runs in a procedurally generated world. 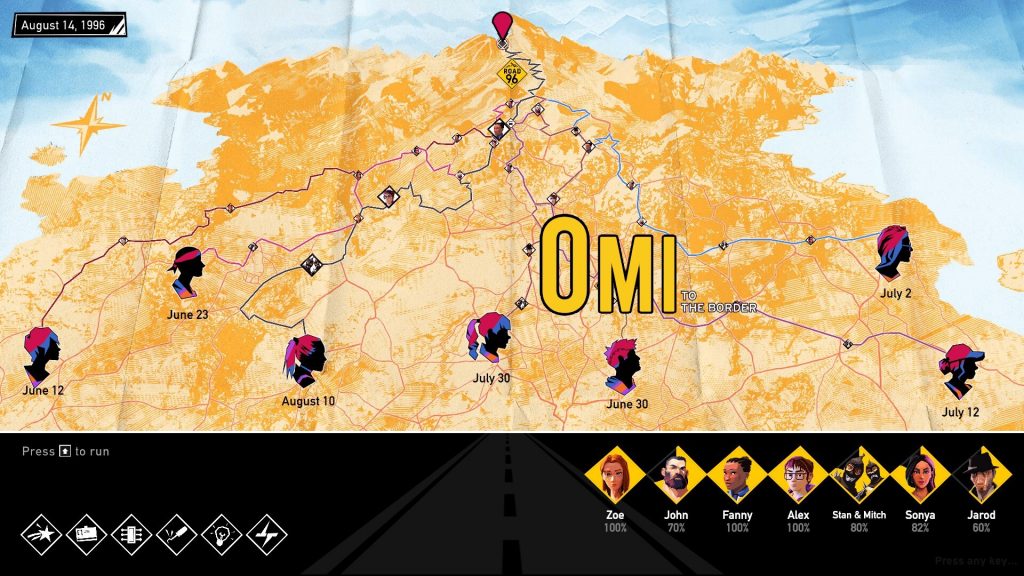 As for the characters themselves, I really liked the balance all of the important NPCs struck. Some, like Zoe, John, and Alex, I was happy to see and genuinely looked forward to their segments; others, like Fanny and Sonya, weren’t bad, but they made me a little anxious, since one’s a cop and the other is a high maintenance celebrity. Then there were those that I absolutely did not wish to see, like creepy cabbie Jarod or the sticky-fingered duo Stan and Mitch, who always spelled trouble every time they turned up. All of them had unique stories that wove together into one rich tapestry of a tale, and it was a delight to see how it all played out.

I haven’t had a chance yet to discuss Road 96’s aesthetics, which were pure, concentrated awesomeness. The music was incredibly well-crafted; few soundtracks both sound great and capture the essence of the game, and I’m happy to report Road 96 does this in spades. For one, there’s plenty of synthwave and rock goodness, both genres always welcome on long road trips. Second, as the year is 1996, the songs are found scattered throughout the world by way of mixtapes, which is such a great nostalgic callback to beloved tech. As far as audio goes, Road 96 deserves every last bit of praise. 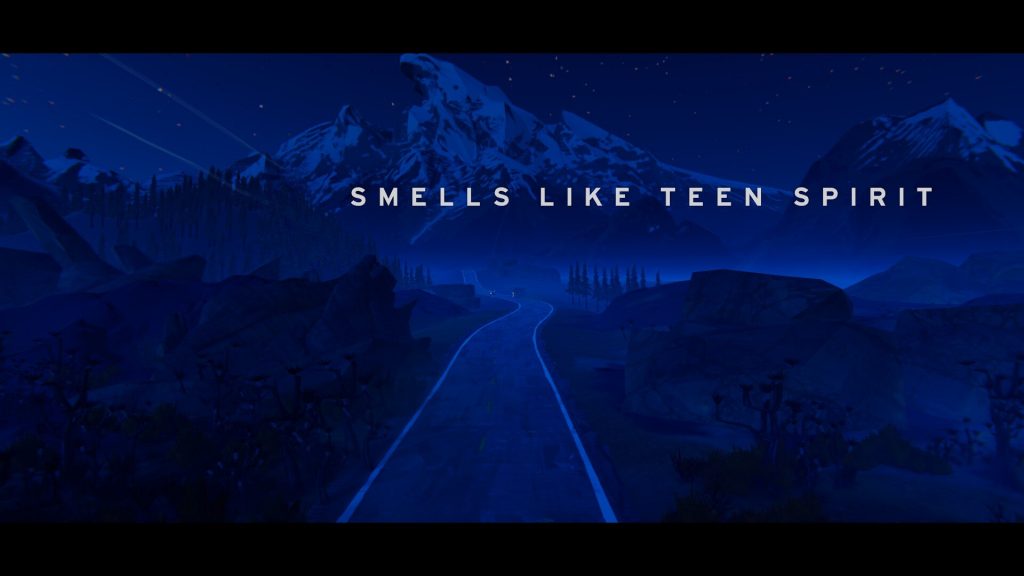 When it comes to visuals, let me just say that while Road 96 has also gone above and beyond to paint a stark yet beautiful landscape (seriously this is like driving from LA to SLC all over again), the graphics are a bit rough when it comes to people. I mostly noticed this with Zoe, but faces can be noticeably pixelated — at least on the Switch. It’s not anything that will stop you from playing the game, and I imagine that you’ll not notice playing on docked mode, but in handheld mode it was quite distracting. It’s such a shame, considering their body and facial movements were mesmerizing, especially Sonya’s and Zoe’s, and they (especially those two) move like real people.

I honestly don’t have many complaints at all when it comes to Road 96, but I instead have a warning — this game is going to take some time to really open up for you. I don’t want to say more to avoid spoiling anything, but you’ll need to play at least one, maybe two runs before you really feel sucked into the story of Petria. After my first hour playing, I wasn’t super feeling the game, but picking it up again on the second night had me hooked until the wee hours of the morning. If you’re struggling to get across the border, give it time; you’ll uncover something bigger than thought possible before you know it.

Road 96 started off a bit rocky for me but quickly became one of the best games I’ve played all year. It’s absolutely on my top 10 games list for 2021, and, given enough time with it, I’m sure it’ll be yours as well. The Switch is a fine home for this politically-charged narrative, and if you have a desire to overthrow corrupt systems or just cross the border for a better life, chances are you’ll feel the same way too. If you want to get lost in a dystopian world, then do everything in your power to leave it, hitchhike your way to Road 96.

Editor’s note: This review is based on a retail copy of Road 96 provided by the publisher. 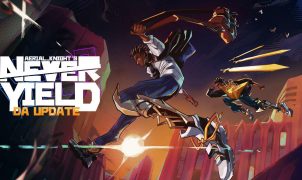