Rogue Explorer review: It Could Have Been Something Special 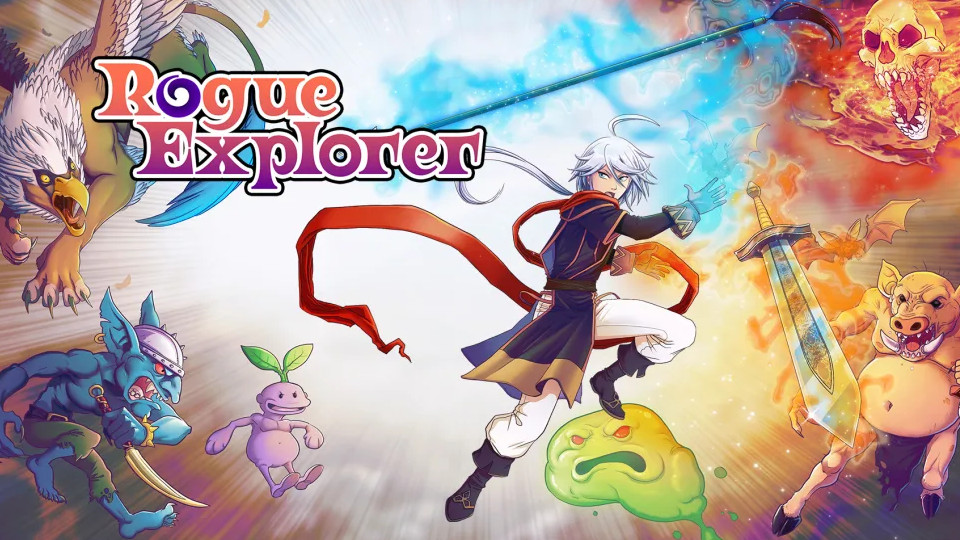 This might be a strange way to start a review, but here goes. As I played through Rogue Explorer, I kept appreciating the bones of the game. There were many elements that, if combined differently, might have resulted in a fantastic experience. It’s almost like glancing at the schematics for a hot air balloon that was instead scrapped and used to build a hot dog kart. Which I don’t mean in a cruel way. Just that the game never quite achieved what I felt it was capable of. Keep reading our Rogue Explorer review to see if the game might still be worth your time. 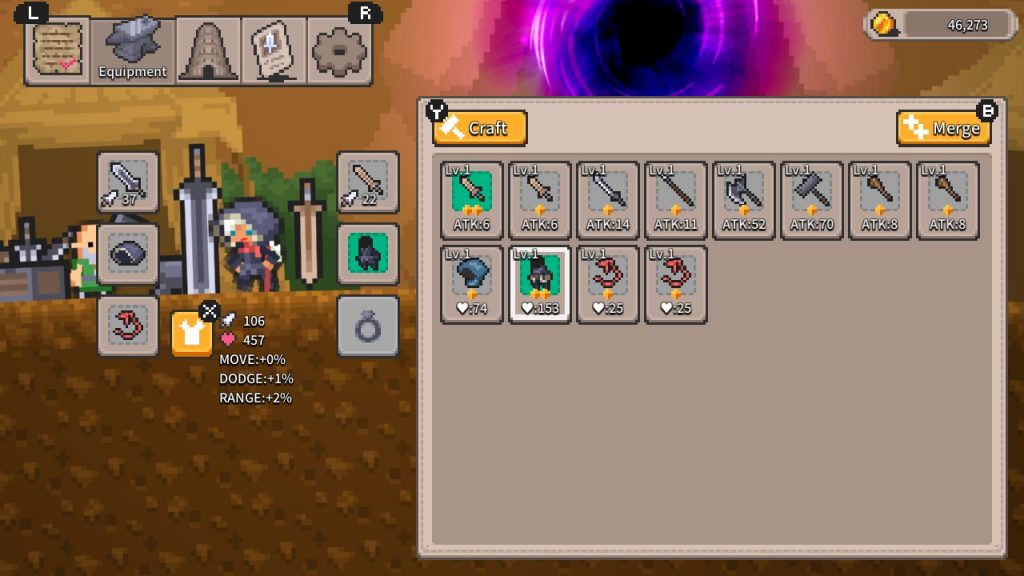 First, let’s get this out of the way. There’s zero story in Rogue Explorer. You don’t even name your hero. They could be named lord Buckethead III for all I know. And honestly, it doesn’t really matter. Roguelikes are more about the gameplay than anything else. That said, I personally wish there was a little something to keep me invested in the game. Because while the gameplay was mostly inoffensive, it also never really expanded in any significant way. Which any good Roguelike should. 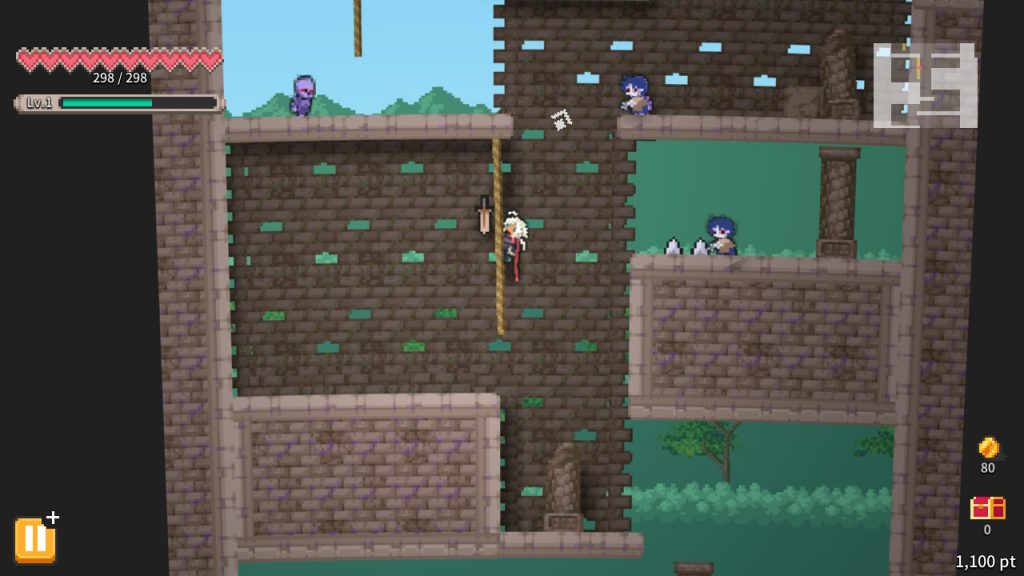 The only thing I could gather from the game page is the dungeon you keep exploring is called the Abyss Tower. Other than that, your only goal is to make your way through each biome, jump through portals, defeat bosses, rinse and repeat. Each progressive area is slightly more challenging than the one before it, and has its own monsters. Before you get too excited, there are many color swaps. And even without that, many foes attack one two ways. Either they charge towards you, or they fire projectiles. That’s pretty much it. Now some, like the annoying bats, fly at you through stage geometry. But the vast majority move like lackadaisical zombies and get violent once you’re within range. There’s nothing necessarily wrong with that, but I was hoping for a bit more variety.

Stop Bossing Me Around 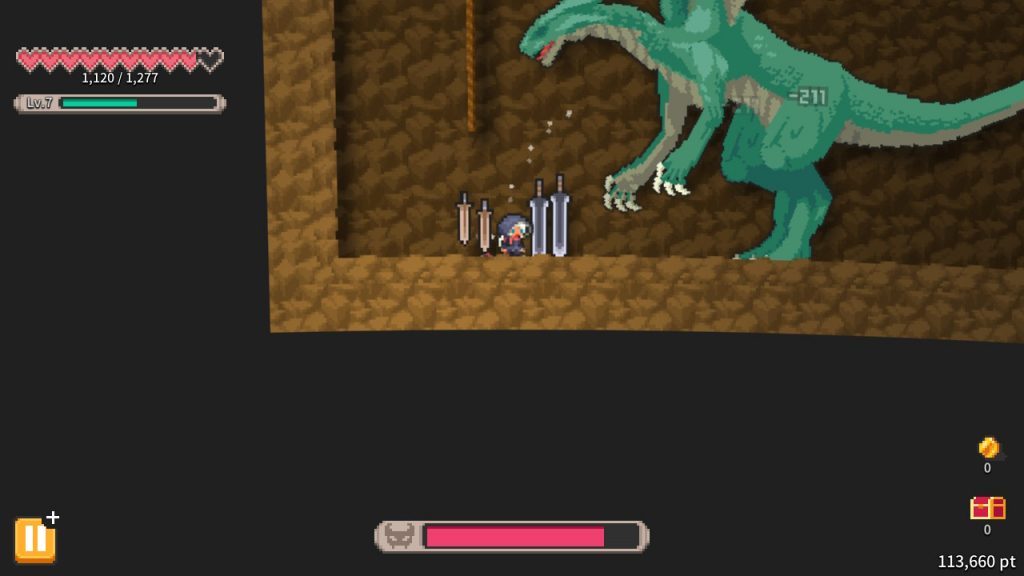 I wish I could say bosses were the highlight, but they mostly suffer from the same issues as basic enemies. The vast majority just charge you, some fire projectiles, and that’s pretty much it. They don’t have complex combos or distinct tells. Just time your dodge rolls right, and you’ll do fine. I did enjoy the dragon and bone snake bosses since they mixed things up a bit. But even then, the bosses in Rogue Explorer leave a lot to be desired. 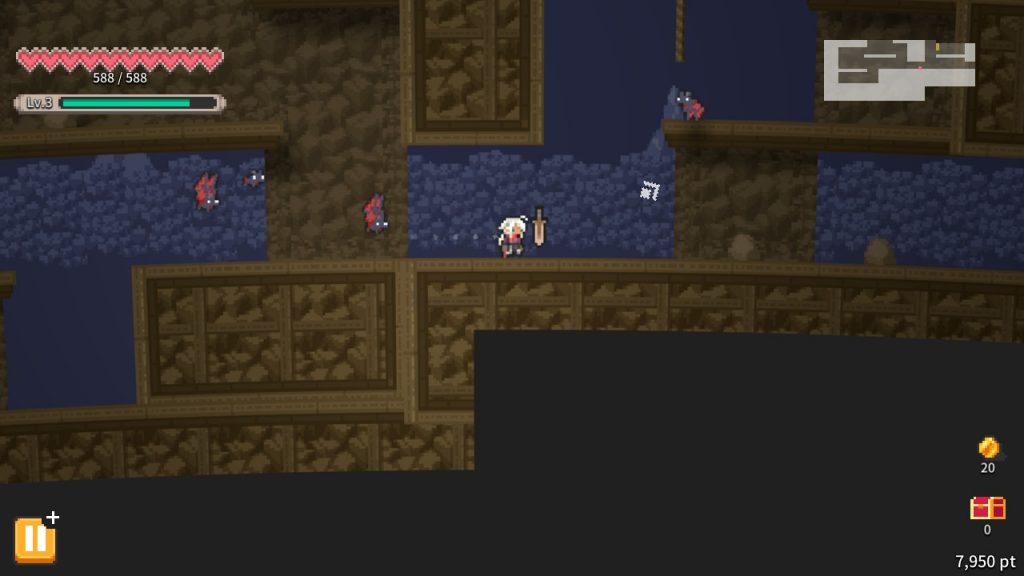 Now, none of what I’ve mentioned so far would matter if this was a tight Roguelike experience. And while I can say there are some good points about Rogue Explorer, ultimately, they weren’t able to elevate the game very much. Let me explain. I expect gradual upgrades in rouge games to help enhance the experience. Make your character stronger, faster, better. And while that’s technically present in the game, the upgrades are so minor that the game felt nearly identical starting out as it did 9 hours later. 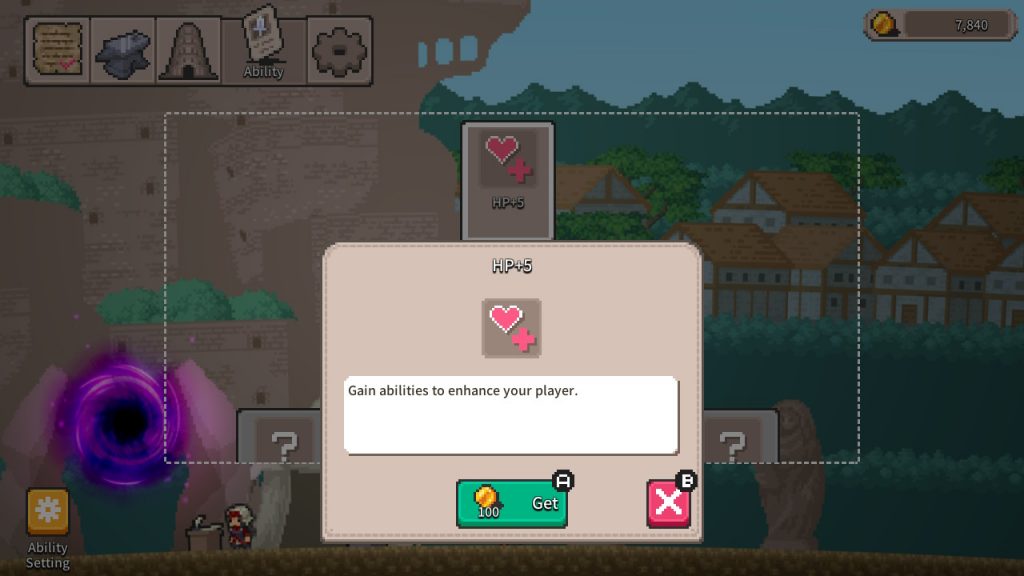 Upgrades are split between permanent and temporary types. The permanent ones are called abilities. You pay cold hard cash to unlock them. Most are just slight boosts to your stats. You can also unlock the chance to find skills once you level up. Skills are temporary and only last for the level you’re in. The moment you die or start a new level, you start over from scratch at level 1. What’s unfortunate is I found the skills did much more to enhance the game, so it was frustrating you could never rely on them. They ranged from increasing how many weapons you attack with to giving you a double jump or even generating shockwaves when you land. 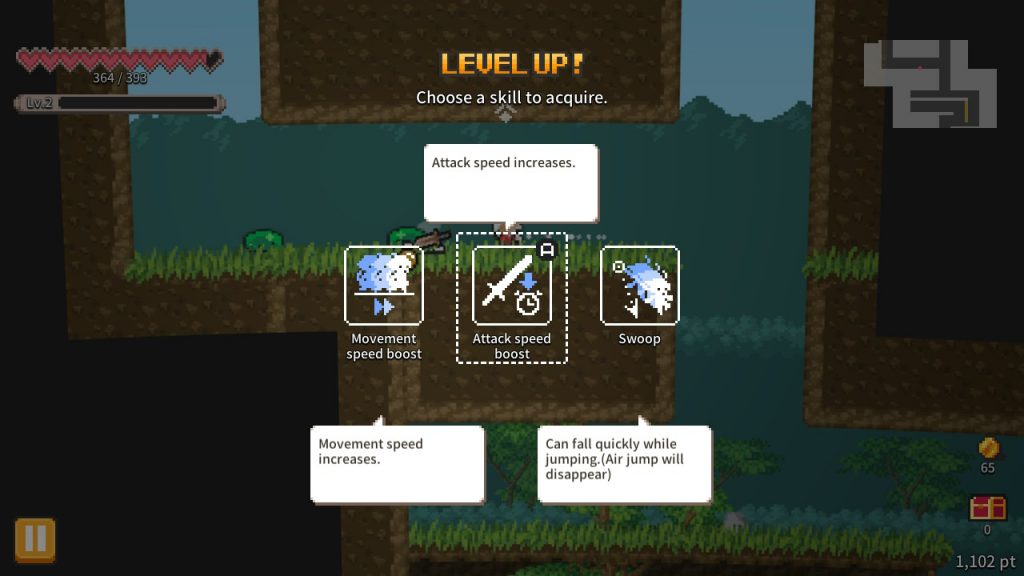 The combat definitely works in the game, but it’s also pretty barebones. You never get powerful magical spells or can hold various items. You have your equipped weapons and gear, and that’s pretty much it. Sure, you can find healing potions, but you can’t store them, and immediately gulp them down. And while you will find schematics and ingredients as you explore, none of them ever really opened things up. That said, I liked one peculiar aspect of Rogue Explorer. You don’t swing your weapons like a normal person. Instead, they kind of float distant from you and rush towards enemies you’re facing. Think Rayman’s fists, and you’re on the right track. This led to some really cheap strategies, such as camping just far enough away from foes so I could hit them, but they couldn’t touch me. Though later on, I got punished for this by foes that could float through stages or even shoot projectiles at me from off-screen. 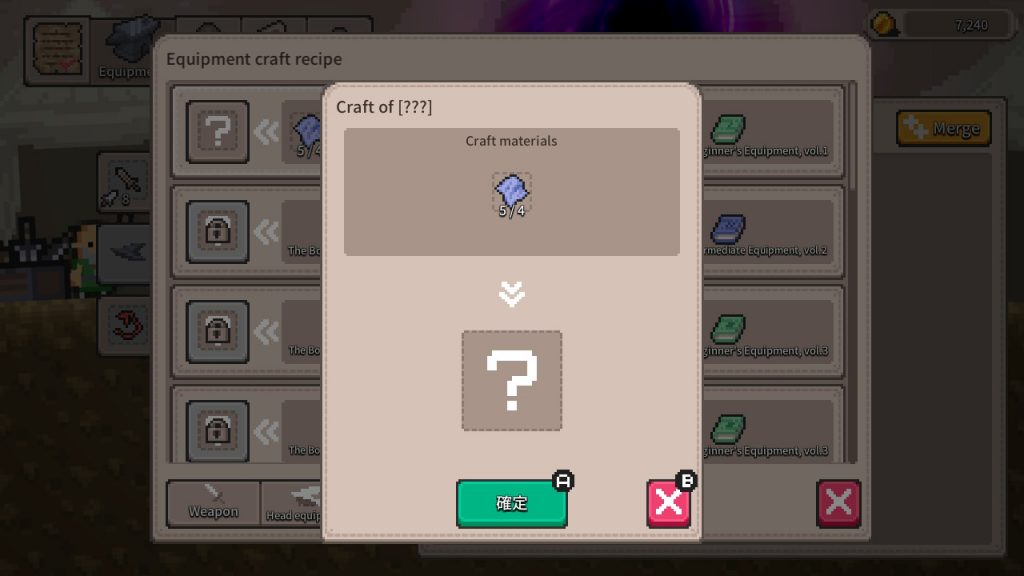 What hurts the game the most was a lack of explanation. While it’s true there’s a tutorial there to explain the basics of combat, it was the other systems in the game that I got most confused by. Mostly thanks to poor and often incomplete translation. For example, more than once, game menus had prompts in another language. Some of these got replaced by English prompts, but not all of them. This sort of thing made it more than a bit confusing to do things like craft new gear. Another thing I didn’t realize was possible until I started writing this review was customizing your avatar’s looks. 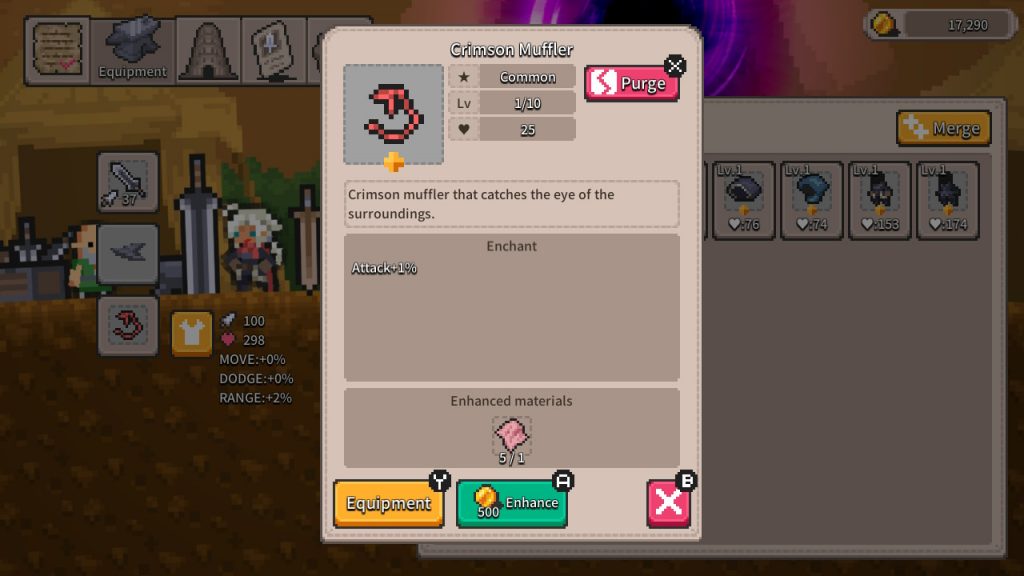 Another example of the lack of clarity was in the tutorial. I swore it said you could open chests by jumping on them or attacking them. I discovered pretty quickly you could only jump on chests. This doesn’t sound like a big deal, but when you factor in randomly placed traps, such as buzz saws and spinning spike balls, it can be a hazard doing so. Oh, and every time you craft an item for the first time, it’s totally unclear what it will be. Which sometimes had me sweating bullets, since it required cash and ingredients I had acquired. 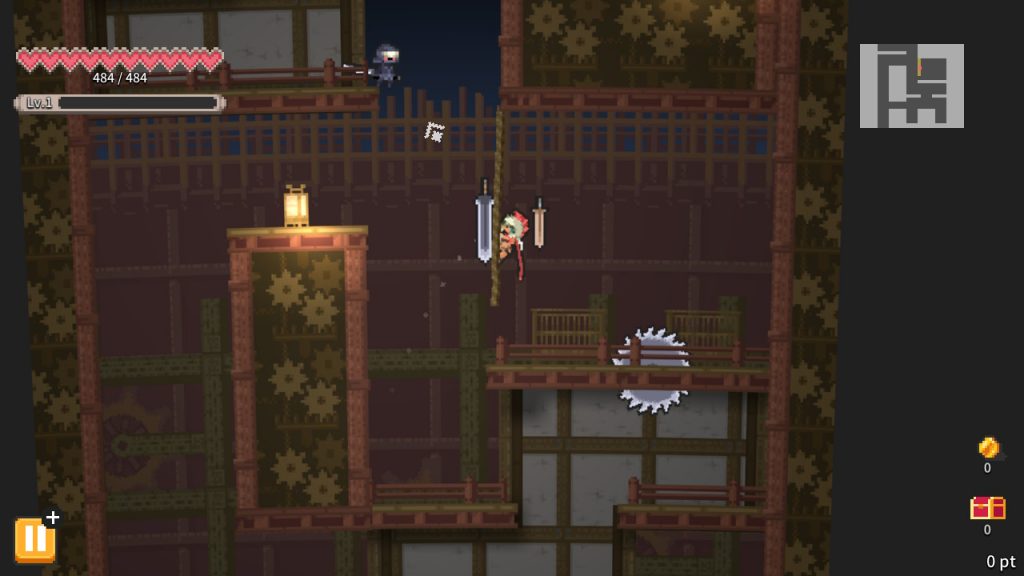 While I did enjoy the gameplay, there are many aspects that I found frustrating. One is the inconsistent difficulty. While it’s true the game plays practically the same several hours in as it did at the start, the difficulty can still ramp up surprisingly. Mostly when you fight what you assume is a basic enemy, and suddenly are missing half your health bar. I should also note, the AI for most foes is super aggressive. And they can also detect you from far away. What that often results in is foes camping on the edges of platforms you need to get to, attacking wildly. Other than the cowardly Mandragoras, which run and hide once they see you. Also, though this is a nitpick, the lack of clear sound cues to announce attacks always bugs me. When you add in floaty physics, you get a bit of a messy final result. 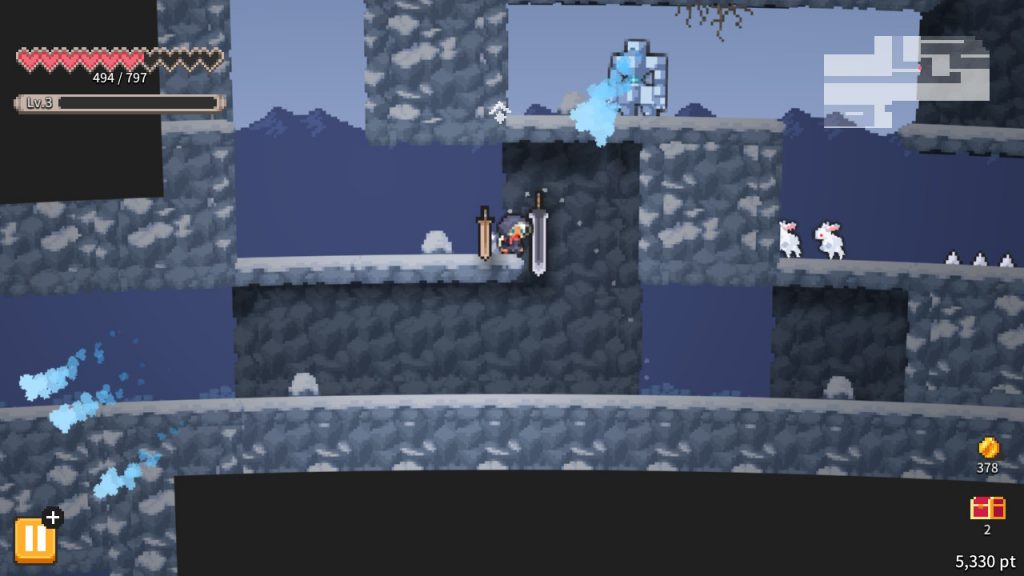 Now, I actually thought Rogue Explorer was an attractive game. Sure, it’s basic, but it’s also colorful and interesting. If you play a lot of retro games, you’ll probably find something to enjoy here. There are lots of skeletons, zombies, dragons, and more to keep things fresh. The one area I was really surprised by was the music. The music in the game is surprisingly great. Most tracks are energetic and upbeat, and every stage has its own tunes. While some get reused later, overall, I found the music quite entertaining.

I still maintain Rogue Explorer could have been a great game. Honestly, if it was less focused on bland Roguelike elements and instead was reimagined as a more robust Metroidvania, I think this could have been awesome. Sadly, as is, it’s pretty hard to recommend to most gamers. But if you enjoy simple, retro-styled games and want something affordable, you might want to pick this up. 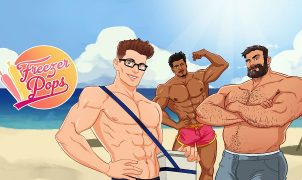