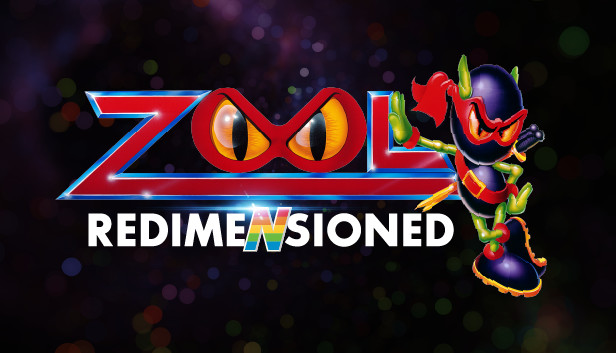 When Zool first appeared on the Amiga in 1992, it was intended to be the platform’s answer to Sonic the Hedgehog. An admirable goal, to be sure. However, you don’t need to be a gaming historian to know how that battle went down. Sega’s Blue Blur became a household name. As for the now-defunct studio Gremlin Graphics‘ nimble ninja from the Nth Dimension? Well, he faded into obscurity alongside the Aero The Acrobats, Bubsy the Bobcats, and Awesome Possums that defined the “Attitude Era” of 2D platformers.

But that’s not to say Zool was a bust. Quite the contrary – the game received critical acclaim and was bundled with the Amiga 1200 to showcase its performance. It was eventually ported to various computers, home consoles, and handhelds. Additionally, the aptly titled Zool 2 found its way to computers and the ill-fated Atari Jaguar in 1993. As you’d expect, the game offered more of its predecessor’s high-energy platforming, challenging gameplay, and questionable candy marketing. Still, it wasn’t quite enough to compete with the mustachioed plumbers and hightop-clad hedgehogs that dominated the gaming landscape of the early 90s. As a result, the franchise has remained dormant for nearly three decades.

That is, until now. Sumo Digital Academy, a talent development program designed to create new pathways into the games industry, has given the series another chance with Zool Redimensioned. This is a totally reimagined version of the game that started it all, adding modernized features, updated boss battles, and various quality of life enhancements. But are these additions enough to make Zool a reborn classic? Let’s dive into our Zool Redimensioned review and find out!

Too Zool For School 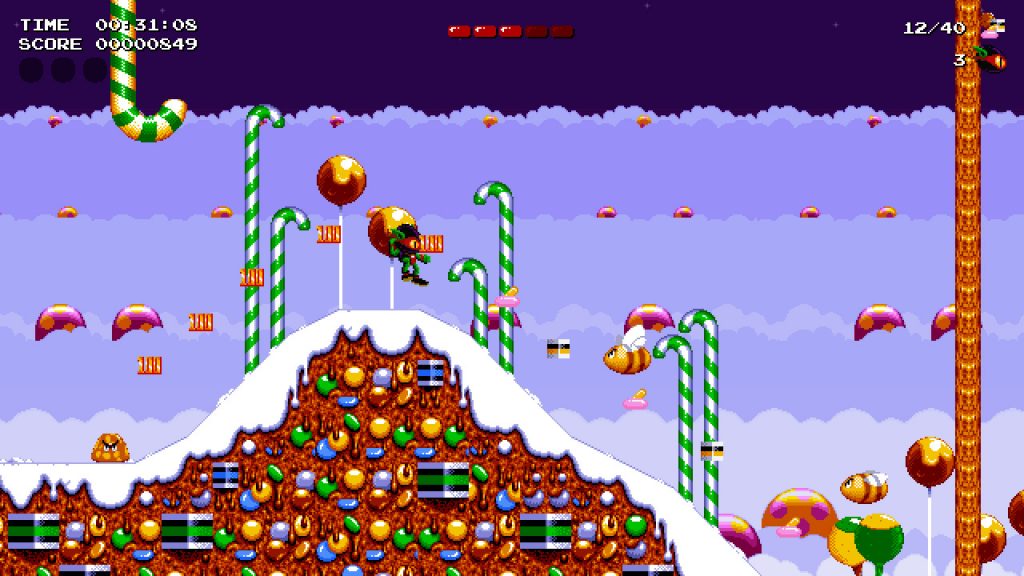 If you’ve never played Zool before, it’s sort of a strange fusion of Sonic the Hedgehog and Mega Man. Zool runs lightning-fast, and he can blaze down inclines, perform death-defying acrobatics, and pepper his enemies with bullets. Additionally, he can jump on enemies’ heads in Super Mario Bros. fashion. Or, if he’s feeling fancy, deliver a devastating corkscrew dive to flatten his foes or perform a sliding kick to glide under traps or clobber anything that gets in his way. Though, to be honest, while welcome, most of these abilities aren’t entirely necessary. I generally found I was able to get through most encounters by blasting away like a trigger-happy gremlin.

Zool Redimensioned does, however, introduce one new technique that comes in handy: the double jump. Having this new ability at your fingertips makes navigating the game’s stages in search of hidden 1-ups and collectibles so much easier.

Honestly, this newfound sense of approachability permeates the entire experience. The controls are crisp and responsive, and that makes guiding your big-headed ninja around the game’s large stages especially satisfying. Add to this the addition of modern quality of life updates such as a level select, checkpoints, and various accessibility options, and Zool has never been more welcoming. And considering the original’s reputation for being a soul-crushing experience, that’s certainly good news for newcomers or casual platformer fans. 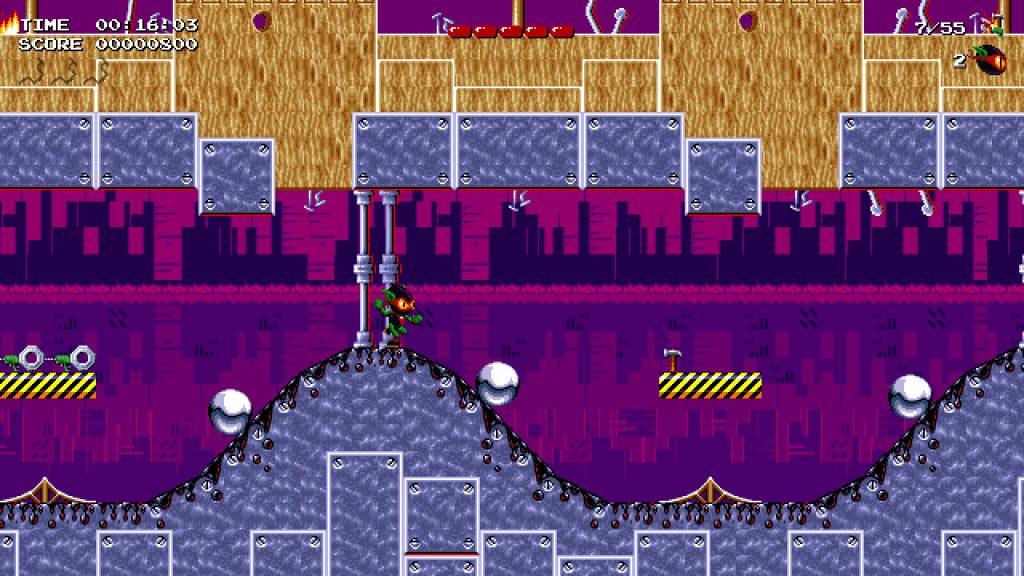 There are two game modes to choose from in Zool Redimensioned. The titular Redimensioned mode just so happens to be the star of the show. It introduces the aforementioned double jump ability, overhauled boss fights, new secrets to uncover, and more. I can’t say it feels like a totally new game, of course. However, it’s much more accessible than the original, and I had fun blazing through the game’s seven distinct areas and uncovering all of the hidden secrets and mini-games spread throughout them.

However, if you prefer the original’s grueling challenge, then Ultimate Ninja Mode is the way to go. Not only does it strip you of your double jump, but it also features much more difficult bosses to contend with. While I prefer Redimensioned feels like the definitive Zool experience with its updated mechanics, this is probably the mode that will keep series veterans —or those just looking for a meatier challenge— entertained. I breezed through Redimensioned Mode without losing a life until the end of the fifth act. I can’t say the same for Ultimate Ninja Mode, though, which had me sweating bullets by the time I reached the second boss encounter. 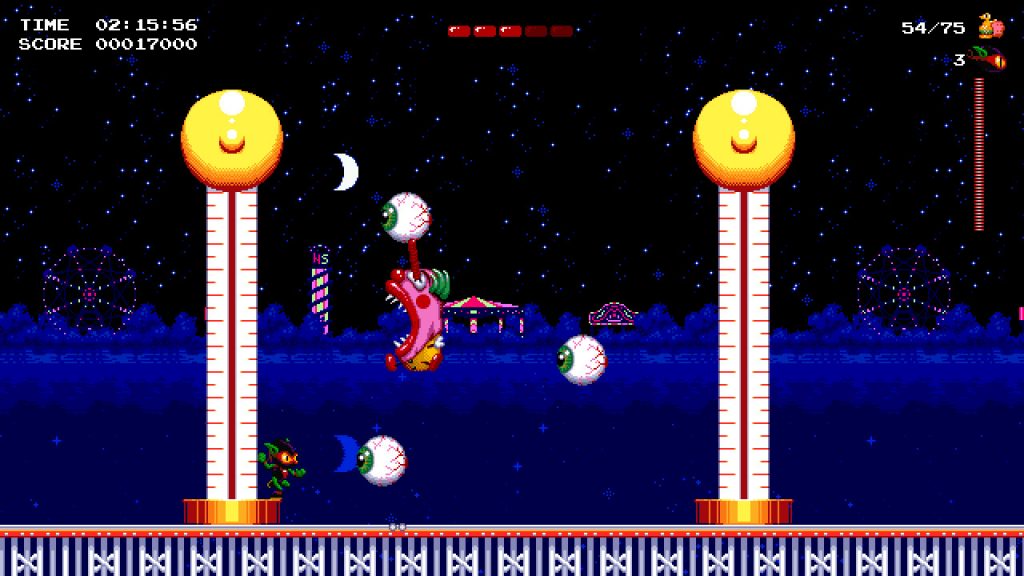 Without a doubt, Zool Redimensioned improves upon the original release in many ways. However, there are some lingering issues with its core design that have never really gelled with me. My main complaint is the game’s chaotic stage layouts – something European platformers were notorious for in the 16-bit era. If you’re a member of gaming’s crustier demographic like I am, then I’m sure you can remember Super Mario Bros.‘ world 1-1 like the back of your hand. Or the many twists and turns of Sonic The Hedgehog‘s Green Hill Zone. With tight designs and memorable item locations, these are prime examples of platformer stages done right.

Zool‘s stages, on the other hand, find themselves on the opposite end of the spectrum. They’re a borderline schizophrenic mess of floating platforms and collectibles with no coherent vision. As a result, they’re not especially memorable, and all of their acts tend to blend together. Unfortunately, these busy stage designs create other problems, too. It can be tough to spot certain hazards with so much going on and how tiny the game’s sprites are. As a result, this led to me suffering more than a few frustrating deaths because I ran into some seemingly microscopic threat that I didn’t notice amongst all of the visual clutter and loud backgrounds.

Unfortunately, this lack of imagination also extends to the enemies. Zool’s nemeses run the gamut from bog-standard slimes to murderous musical instruments and ill-tempered puffs of cotton candy. The bosses, which should be the big payoff for each area, don’t fare much better. They sport minimal animation and range from a disgruntled jackhammer to a big bee with lollipops for wings. Needless to say, when the most exciting battle takes place against a cactus with a tomato on its back, you know you’re scraping the bottom of the barrel when it comes to boss designs.

Zool Redimensioned Is A Remake Fans Will Love, But it Won’t Change Any Minds.

As far as extras options go, Zool Redimensioned is a little on the lean side. There’s a CRT filter that does a decent enough job of recreating the scanline effect of your old tube TV. It looks pretty nice, but it also softens the image so much that it can be even more difficult to spot enemy projectiles and other hazards. Additionally, there are a handful of accessibility options to choose from. These do things like enable turbo fire or the ability to jump endlessly. And, of course, there’s an invincibility mode as well for those who just want to blaze through the experience. Another fun bonus is the addition of the Mega Drive version of Zool. Sadly, the emulation quality leaves a lot to be desired, which makes this bonus more of a novelty than something you’d actually want to play through to the end.

I can appreciate what Sumo Digital Academy set out to do with Zool Redimensioned. It’s a solid remake of a platformer which, while not as well remembered as the titles from which it takes its inspiration, has its own place in the annals of video game history. The updated mechanics and quality of life features are great. Furthermore, with two modes to master, existing series fans will surely get their money’s worth. But as welcome as these additions are, they don’t do anything to remedy the issues that plagued the original release. With random stage designs and lackluster enemies and bosses, Zool just doesn’t do much to stand out from the crowded platformer pack. Still, if you already have a soft spot for the ninja from the Nth Dimension, don’t hesitate to add this one to your Steam library. If Zool didn’t do it for you before, however,  Zool Redimensioned isn’t going to change your mind.