Sometimes, you need an adventure so grand that it spans multiple worlds, realities, and galaxies. And sometimes, your adventure can be so much smaller in scale, and yet no less wondrous. Enter Haven Park from Bubble Studio, the tiny exploration game that’s oddly addictive, relaxing, and moving all at once.

A Plucky Little Bird on a Little Adventure 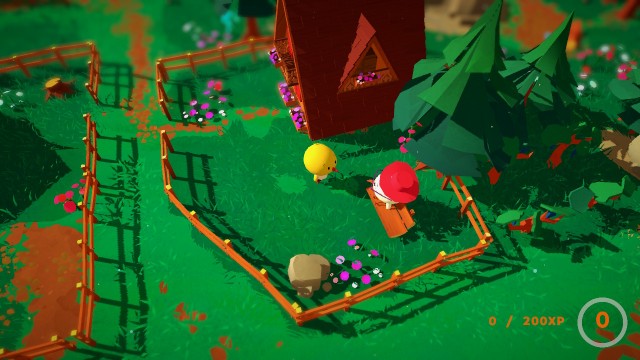 Haven Park has you take on the role of Flint, a plucky young bird who takes over the management of Haven Park for his grandmother. The story is light and simple, and there’s honestly not much more to it than that. And yet, for how sparse the story content is, what’s there is compelling and moving. There are a few scenes spread throughout the game between Flint and his grandmother, and they’re charming, wholesome, and even poignant at times.

The bulk of the (admittedly fairly short) game revolves around exploring the tiny island, finding all of its derelict campsites, and fixing them up. When you first locate a new campsite, there won’t be much of anything there – simply a circle of stones where you can set up a campfire (or other rest items, more on that later) to entice people back to the largely abandoned campgrounds. There are quite a few campgrounds scattered across the island, and some of them will involve some light puzzle-solving in order to reach them.

If You Build It, They Will Come 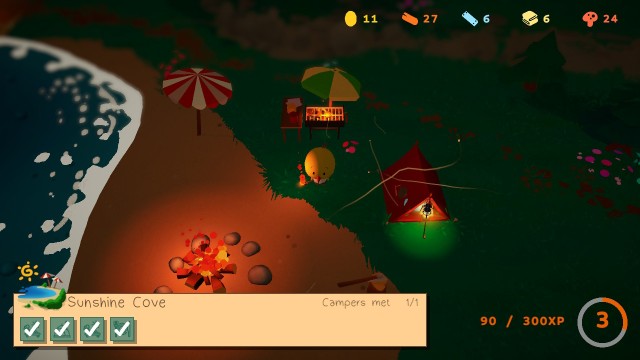 In order to rebuild the campsites of Haven Park, you’ll need to collect resources that are strewn about. These resources are: wood, metal, fabric, mushrooms, and coins. These resources can then be used to construct items for your campsites. There are a number of items that you can build, from tents and bungalows, to picnic benches and Ferris wheels. Each item has a set number of materials needed to craft it, and once made, can be placed within the borders of each campsite, shown by a glowing border on the screen. While there aren’t as many creative options as I’d like, it’s still delightfully whimsical and adorable, and offers a nice little bit of customization for each campground.

Each camp can accommodate a certain number of campers, and each camper will have their own needs in order to find their experience truly satisfactory. You can see what you need to construct and place in each campsite thanks to a handy little graphic that appears in the lower left, outlining how many rest, activity, food, or decoration items you need to place. The addition of the food carts you can construct was a lovely idea, as your campers will actually buy food from these carts, and you can collect the coins, which can then be used for more construction or the purchase of materials if you’re running low and aren’t having luck foraging. 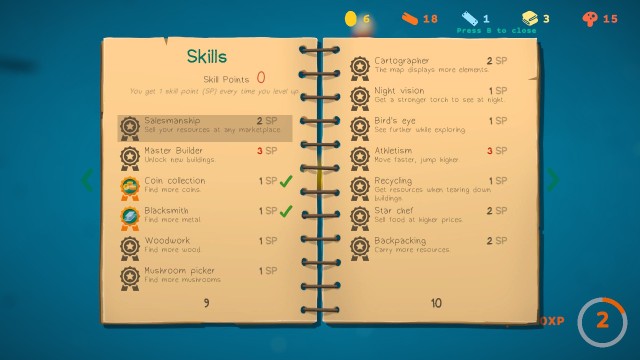 In addition, Haven Park’s campers will occasionally offer you up a sidequest that adds a welcome bit of diversity to the gameplay. Most are simple and/or silly, but none of them really felt like a chore or like boring filler. Some of them are simple fetch quests, while others will have you playing hide and seek. Some campers will tell you legends regarding the island, and ask you to see if you can find any proof. It adds some fun little backstory to the island here and there. I particularly enjoyed the whole sidequest involving an old castle tower you can find, with a storybook atop it that you can read.

For most of Haven Park, you’ll be walking, walking, and occasionally jumping, but mostly more walking. And that’s okay! Because the island is absolutely beautiful. There are trees and flowers, beaches, rivers and creeks, mountains, forests, dried-up lake beds, a small village, farmlands, and even an aerial tram. Considering that Haven Park is a “tiny” game, there’s simply so much to see and explore. As you explore and collect items, you’ll gain experience points, which will level Flint up. With each level gained, you’ll be awarded some skill points that can be used to gain some handy abilities, such as finding more wood while exploring, being able to walk faster, sell food for more at your food carts, increase your storage capacity for resources, and more. You’ll max out at level 10 fairly quickly, but even so, it’s engaging enough to help drive the game forward.

Cute, Cozy, and Bursting With Charm 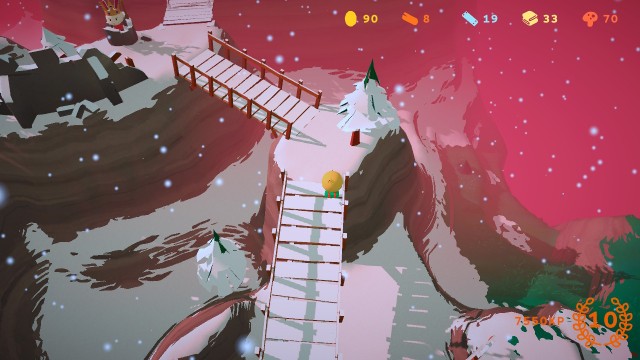 The artistic style of Haven Park is just as charming and relaxing as the gameplay. While textures are perhaps just a little too smooth sometimes, there’s still quite a bit of detail to be found, such as when you find dandelion puffs that can be wished upon and will scatter to the wind. There’s also a day-night cycle, which finds Flint armed with just a torch to light his way across the island. Simple as the character models and campground items may be, they’re adorable, and it all fits together extremely well. There’s not much in the way of music; the game is instead filled with ambient nature sounds, which works perfectly here.

Honestly, I struggle to find criticism for Haven Park. Is it the most stunning, groundbreaking game you’ll ever play? No, but it doesn’t need to be. While it feels like it draws some inspiration from the Animal Crossing series, it remains its own separate entity with its own identity. For a game about walking and fixing up campsites, it’s short, sweet, beautiful, and even at times, moving. It left me wishing for more, but in the best way possible.