Cardaclysm: Shards of the Four Review: It Probably Should Have Stayed On PC 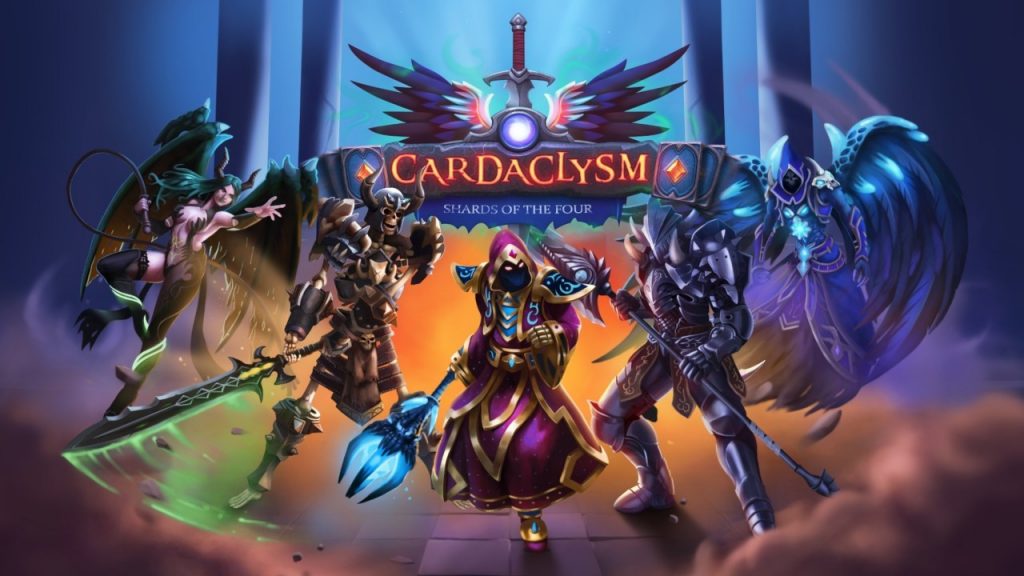 I’ve been eager to try Cardaclysm: Shards of the Four since it was first announced. I recently became addicted to deck-building card games, especially when they’re rogue-inspired. I love delving into the nuance of complex systems, and Cardaclysm seemed to offer a bunch. And while it’s true I didn’t pick the game up when it was first released on PC, there’s a valid reason: I wanted to play it portably on my Nintendo Switch. So fast forward several months, and now we come to my Cardaclysm: Shards of the Four review for Nintendo Switch. Sadly, that wait didn’t result in the polished, tight strategy game I was hoping for. 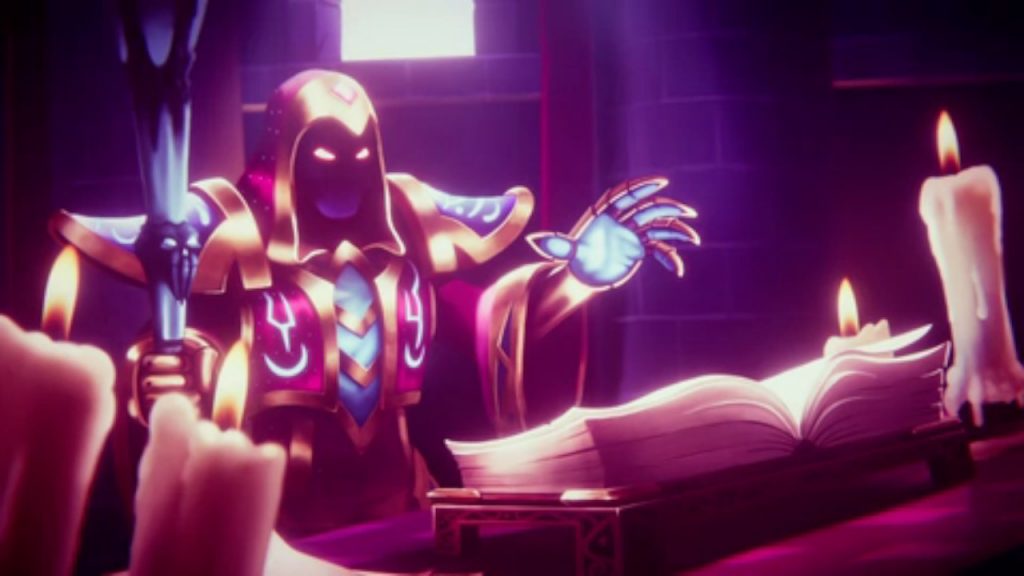 It only takes one dumbass wizard to end the world…

Though the previous review touched on the basics, I’m gonna refresh your memories real quickly. A young mage accidentally triggers the apocalypse, summoning the literal Horsemen of the Apocalypse in the process. You need to fix your mess before the world ends or your elders discover your transgression. So the game has you wandering through various procedurally generated environments to that end. You basically warp in, wander about collecting things, and defeating foes before you warp to another area. You can’t leave until you’ve defeated all the foes in that realm. Sometimes there’s only a handful, and sometimes there’s a dozen or more. And if you fail in your quest, you’ll have to start all over, with a few provisos.

Hope You Didn’t Need Those Cards… 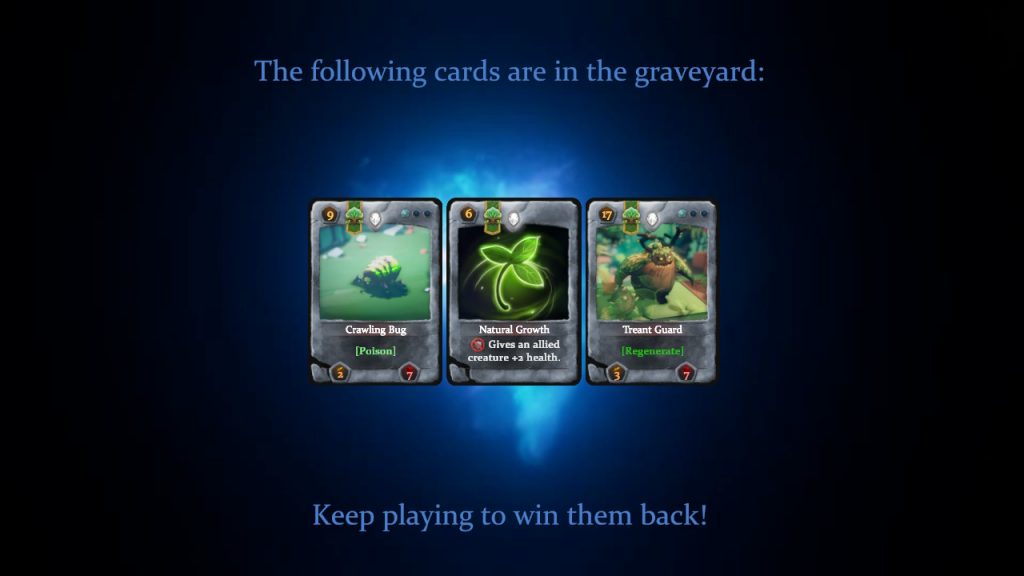 Thankfully, equipment and items you collect are mostly retained when you have to begin anew. This includes vital resources like Golden Runes and Soul Orbs, as well as equipment you can customize your wizard with. What it doesn’t include are some of the cards you obtain from battle. Each time you die, the game will taunt you by showing cards you’ve lost. Sure you might be able to win them again, but it’s still frustrating to lose precious resources like those in a deck-building card game.

It Takes a Lot to Cast Magic 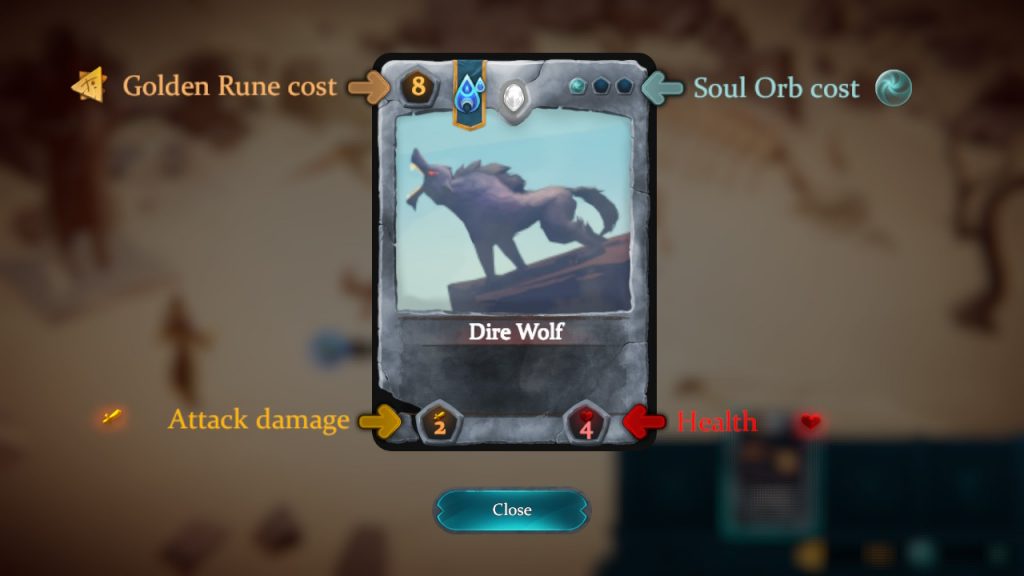 More frustrating, for me at least, was how reliant the game is on random resources you pick up in dungeons. Those Golden Runes I mentioned are one of the two resources you need to use to summon monsters or cast spells. Each card has a different cost, and you can only use them if you’re flush enough. You also expend at least one Soul Orb every single time you summon any monster. I eventually found around 8 Soul Orbs, meaning in a given battle I could only summon 8 monsters. Admittedly, most battles won’t tax you that much, but some are quite challenging. And given the procedurally generated nature of the game, it’s pretty likely some you’ll find some surprising difficulty spikes. 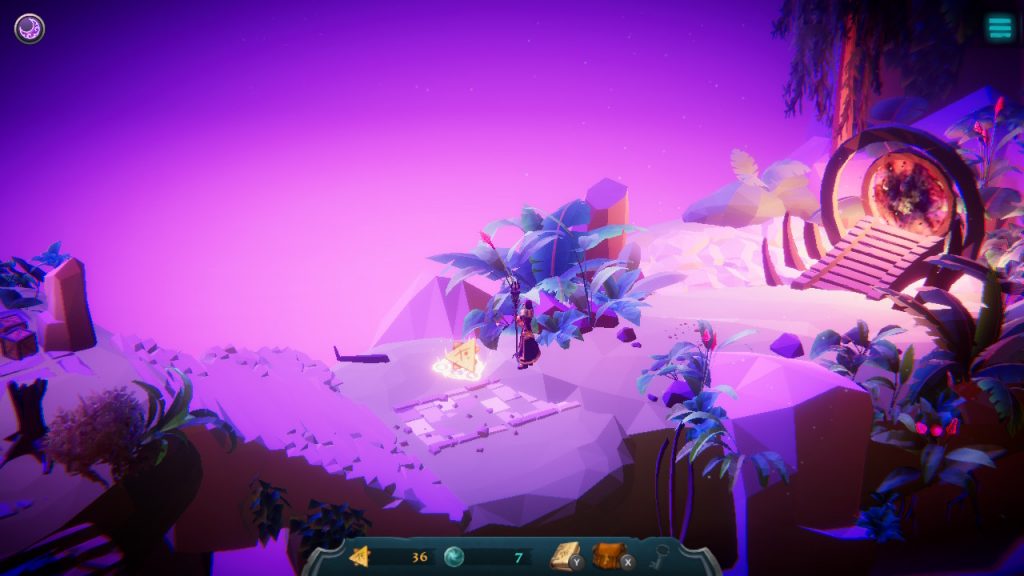 That glowing gold triangle is a Rune. Make sure you collect every single one you can find.

There’s another complicating factor. You only recover a couple of Runes every turn of battle. This means you have to be really thrifty with which cards you include in your deck. I spent a few hours playing Cardaclysm, and only wound up with some 80+ Runes. That might sound like a lot, but there’s plenty of cards that cost 40+, and many more that cost 15-30. Additionally, you can fuse two of the same monster into more powerful forms, but that just costs more Orbs and Runes. I never felt like I had enough resources to plan out complex strategies in the game, despite how many cards I acquired. This made my strategies much more haphazard, which isn’t ideal in this genre. 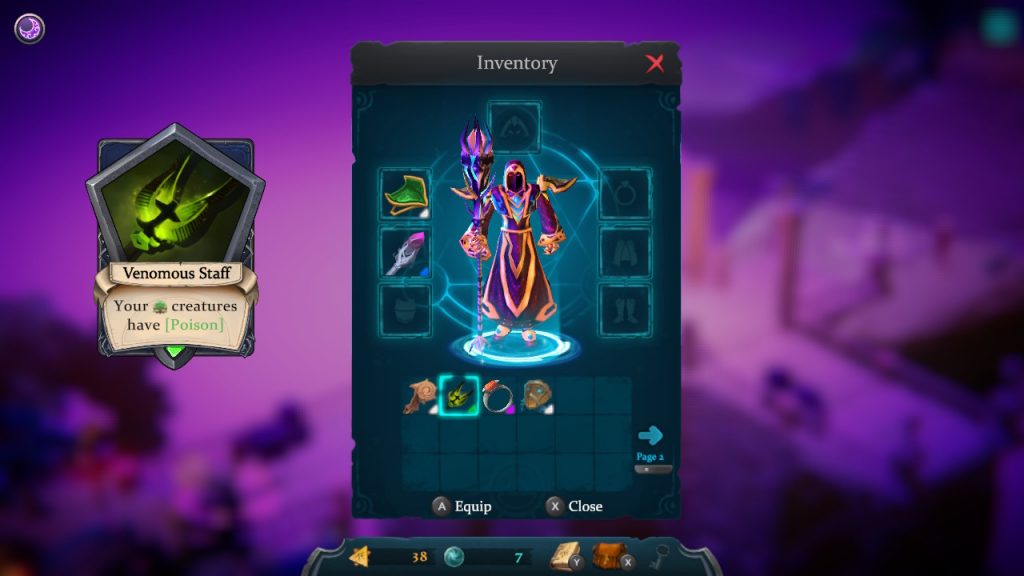 One thing that can help is the equipment you come across in your travels. You can fit your wizard with several different types at a time, and each piece will have different benefits. Some may cause your creatures to do splash damage when they die; others may add spells to your deck; some might even make your poison effects more damaging. There’s a lot of variety, and that’s great. Unfortunately, the equipment is just as random to find as every other resource, so it’s still hard to benefit strategically from any of it. And though you can supplement your inventory with quests that reward you with cards and more equipment, it all goes out the window if you die in the process.

The Apocalypse is Calling 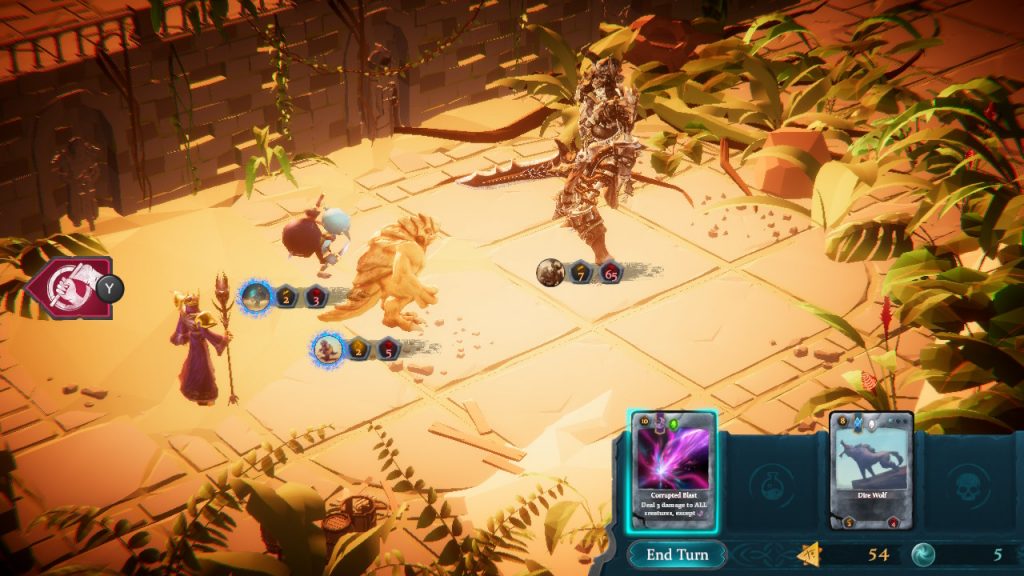 This is what I get for letting the Horseman catch up with me. I only lasted one more turn after taking this screenshot.

Here’s the hardest part of the review for me to write. Cardaclysm: Shards of the Four is NOT well optimized for Switch. At all. It’s clear the game was designed to be played with a mouse and keyboard. Sadly, Elder Games didn’t program it to work with dual Joy-Con and buttons. I’d often find my wizard wandering about drunkenly when I was trying to walk up stairs, for example.

A larger problem is how it’s unclear where the cursor is in combat. I nearly got stuck in the opening tutorial. It told me to select monsters to attack with, but then I couldn’t see a cursor to select them with. I eventually stumbled onto the fact the cursor is nearly invisible, and that you have to press up from the card select screen to select your monsters. Even when I got past that hurdle, the controls for this version never felt intuitive. Equally annoying was how the trigger to initiate battles seemed to vary. Sometimes when I walked right up to a foe on the map, it would prompt me to begin a battle. Other times I would be a foot or so away, and suddenly it would appear. 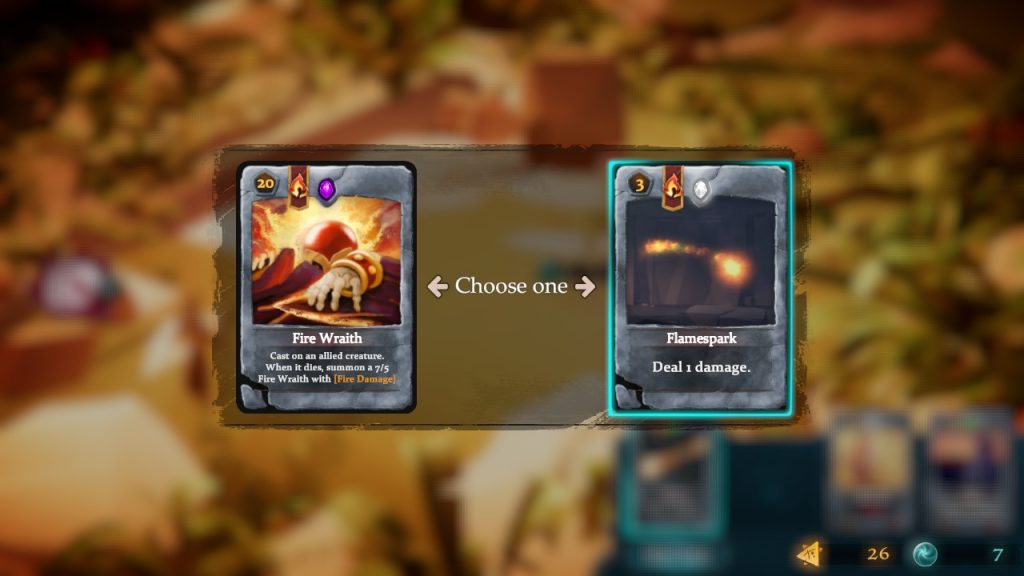 Oh, and did I mention sometimes the cards just plain don’t work?

Another big issue is there’s no clear way to save data or return to the title screen. You can return to the HUB area, but only at the cost of all your current run’s progress. Eventually I took a risk, and realized quitting to the home screen is safe, since the game apparently saves automatically. But it would have been really nice if that was clarified at any point in the game. Perhaps my biggest issue comes back to the combat confusion. More than once I didn’t realize my cursor was randomly on the End Turn button when I intended to select cards for battle. This meant I ended my turn with nothing on the board to protect my wizard, resulting in instant death once he got attacked. And I don’t mean this happened once or twice. It must have occurred at least a dozen or more times, and always when I wasn’t paying close attention to the menu. 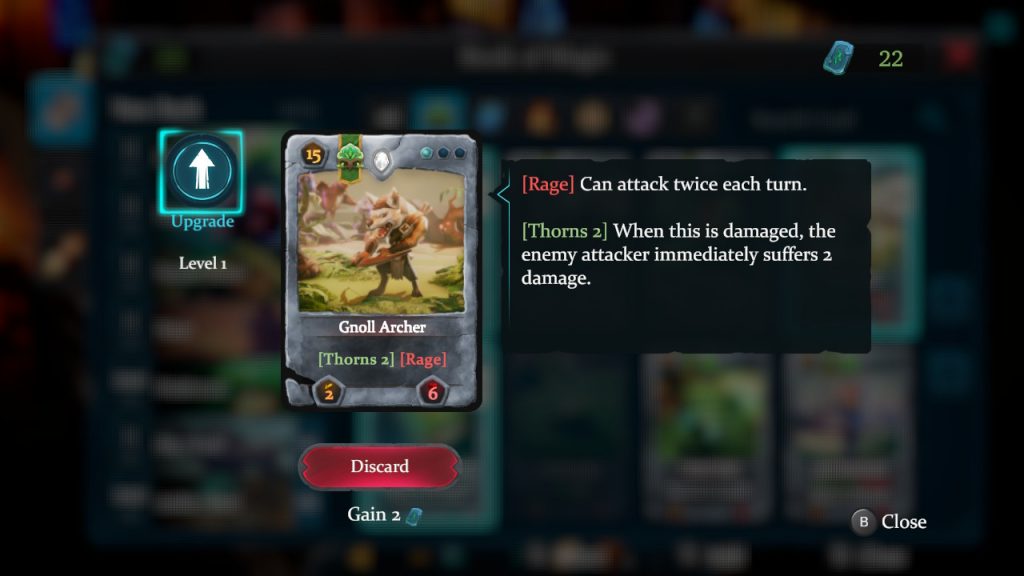 Another minor annoyance is you can’t read details like this unless you’re in the deck-building menu.

To be clear, I don’t hate the systems in Cardaclysm. As I got farther, it did get somewhat more fun. And there’s lots of unique features that spice up the combat, like poison, frostbite and more. I just wish the game evidenced more concrete strategy. Everything felt random and haphazard. I hate to compare it to games like Slay the Spire, but I have to. Even when I died again and again in Spire, it never felt like it was due to the game’s balance. It was my own damned fault. Not so in Cardaclysm, where every part of the game felt poorly balanced for the player. And that’s without even touching on how overpowered the many Horsemen of the Apocalypse were in battle…

Needs Another Coat of Paint 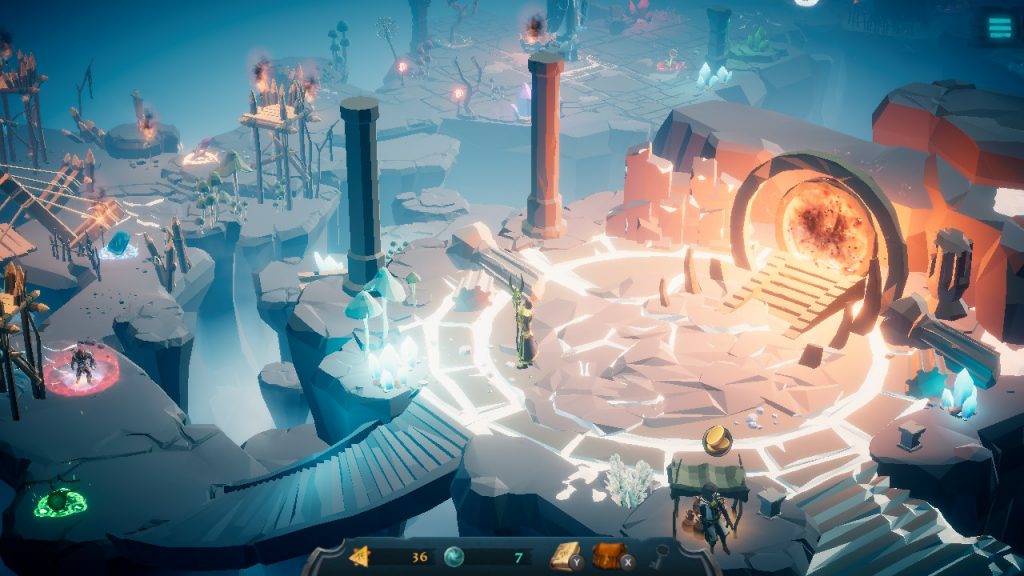 Visually, it’s also a mixed bag. I wish I could agree with our previous review’s synopsis on the art, but I found the art blurry and often ugly in the Switch version of the game. There were also pretty extensive load times, and the cinematics were often clunky and hard to watch. Though I do appreciate the strong color use and expansive maps, nothing here would look out of place in a PC game from the late ’80s. Musically things are much the same. The music won’t get your attention, and most effects are muted at best.

I really wanted to gush about Cardaclysm: Shards of the Four. But it’s just far too poorly optimized for Nintendo Switch. Hopefully, it runs better on PC, but I can’t confirm that. All I can say is it was a great premise held back by poor balance and mixed execution. I truly hope Elder Games learns from this release and makes an unstoppable card game in the future. As it is, I can’t really recommend this one, even to hardcore fans of the genre.