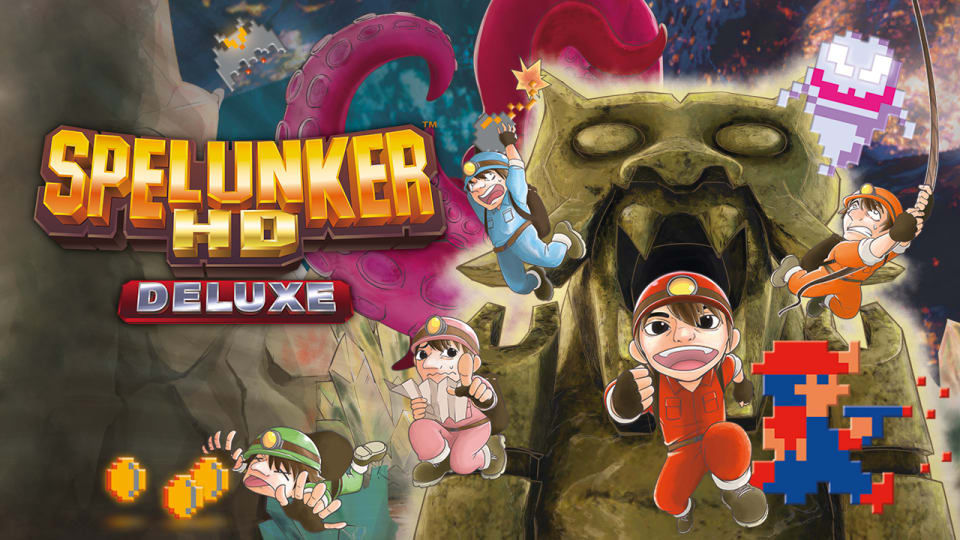 First released in 2009 for the PlayStation 3, Spelunker HD was a 3D remake of Timothy Martin‘s popular 1983 platformer for 8-bit computers. More specifically, it was a remake of Irem’s Famicom and NES port of the game, which followed several years later. It was a fun throwback to gaming’s simpler times, featuring modernized visuals and a handful of new modes.

Now, more than a decade later, Spelunker HD Deluxe has found its way to the Nintendo Switch. But is this retro reboot still worth checking out? Or was it better left at the bottom of a dank, dark pit? Fire up your headlamp and stock up on flares because we’re diving into the depths to find out! 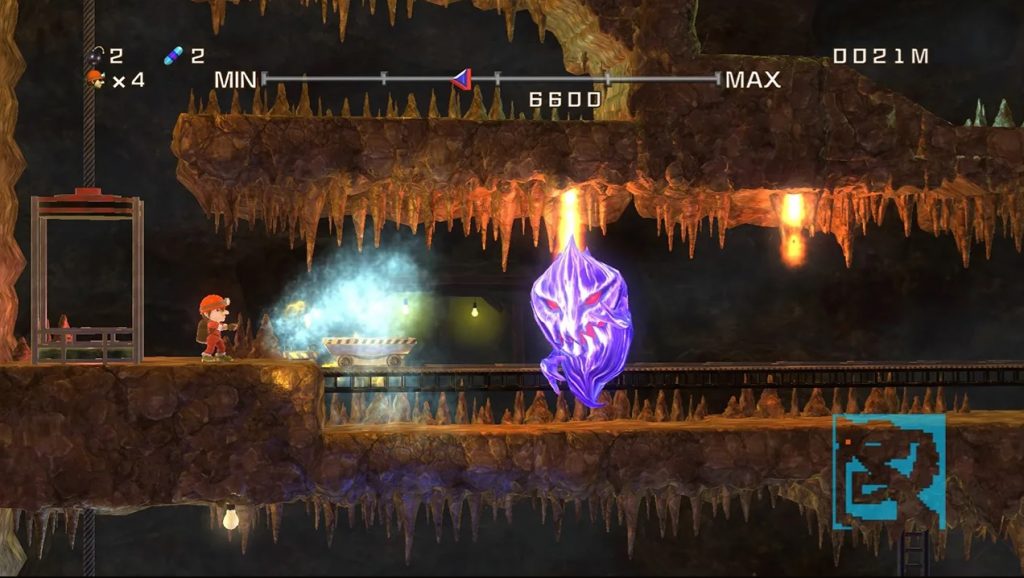 Spelunker HD Deluxe is a side-scrolling platformer where players must explore perilous caves searching for glittering treasure, ancient murals, and excitement. Unfortunately, as you make your way through the stages, it seems everything is out to kill you. You’ll have to avoid rock slides, pitfalls, columns of fire, and enough giant boulders to make Indiana Jones green with envy. And that’s just the caves themselves trying to do you in! There are also poisonous snakes, giant lizards, robots, ghosts, and even bats that will try to bombard you with their caustic bowel movements (Seriously, what do they feed these guys?). And don’t even get me started on the Black Spelunker, who always shows up at the worst possible time to make your life miserable.

Needless to say, a day in the life of a spelunker isn’t easy. But with plenty of practice and perseverance, you’ll find yourself making your way deeper and deeper into the depths. The key to survival is paying close attention to your surroundings and learning how to best deal with the various critters and creeps roaming about. For example, you can usually wait out waves of deadly bat defecation. However, sometimes there are simply too many on-screen at once. That said, you’ll need to fire off a flare to cause them to scatter for a few brief moments, giving you just enough time to pass through the area safely. Additionally, snakes can be scared away with bombs (take care to stay out of the blast radius!), and you can blow ghosts away with your fan.

Of course, this all sounds simple enough. The problem is there’s often a ton going on at once, so it’s easy to become overwhelmed or find yourself panicking and falling into some sadistic death trap. 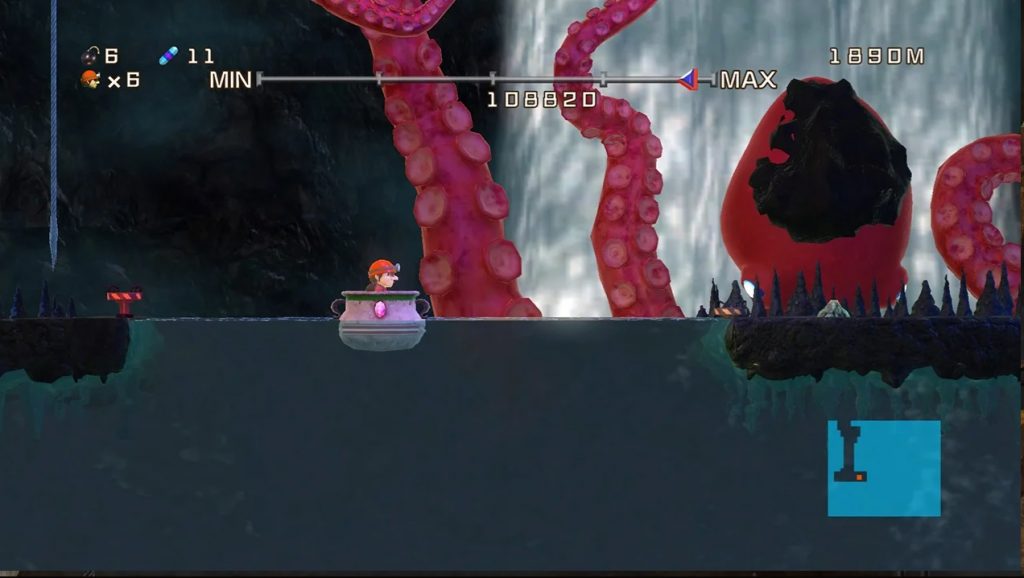 As dangerous as the local flora and fauna can be, sometimes it’s the game’s dated mechanics that prove to be your worst enemy in Spelunker HD Deluxe. The game is literally a re-skin of the 1985 NES and Famicom game. You can even swap between the original or modernized visuals from the startup screen. As such, it features the same kind of stiff and unresponsive controls that were typical of its time which can make platforming considerably more frustrating than it should be.

To make matters worse, our hero seems to have the most extreme case of brittle bone syndrome in modern history. So if you hop onto a platform that’s just a few feet beneath you, you’ll instantly die. This makes the space between ledges and ladders especially hazardous, as it’s incredibly easy to miss your jump by mere inches, only to have your character suddenly begin thrashing around the air in his death throes, seemingly killed by some unseen force. During my review playthrough, I probably died a half-dozen times simply trying to ride the elevator to the next area.

This wouldn’t be so bad if it weren’t for the fact you need to make it through ten stages to unlock the next area. Burn through your stock of lives before that,  and the game won’t save, leaving you back to square one. I don’t mind games that push you to play carefully and learn from your mistakes. But suffering so many deaths due to sloppy, anachronistic design choices can be pretty maddening, to say the least.

Can You Dig It? 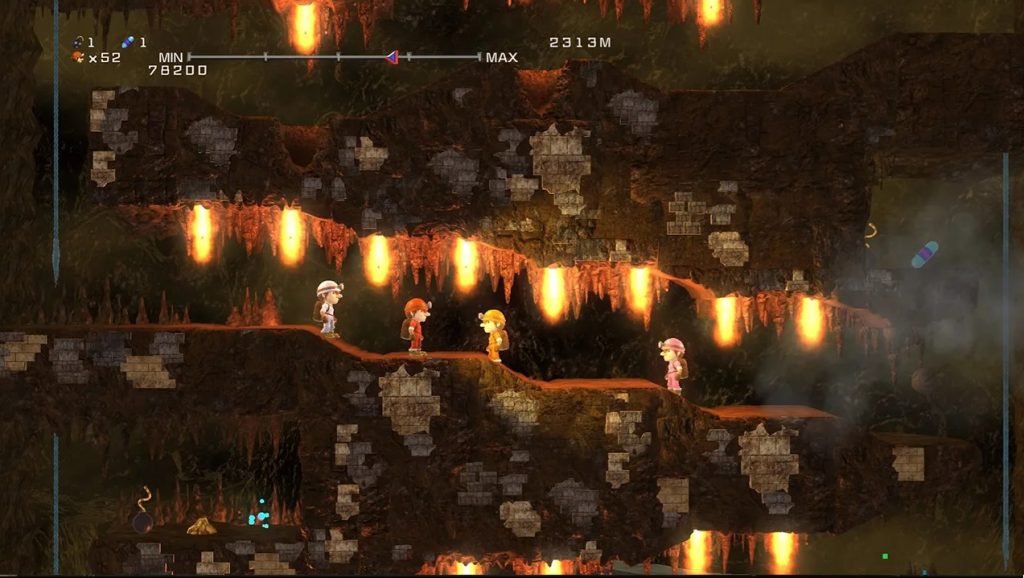 Despite these issues, I found myself coming back for more. The stage designs are clever and often downright diabolical. And there’s a genuine sense of accomplishment that comes from making it just a few floors deeper each time you play. That rush of excitement that washes over you when you finally make it to the next area is pure retro-gaming bliss.

If you are up for the challenge, then there’s plenty here to keep you busy. Adventure mode features a whopping hundred stages to master as you seek out all that glitters. And if you’re up for an even greater challenge, you’re in luck. Championship Mode offers an additional 100 stages, with the most demented stage designs you’ll find outside of a Super Mario Maker Kaizo level. Thankfully, you start this mode with a healthy stock of 50 lives. But don’t celebrate – you’ll need every last one of ’em. And if you’re a real subterranean superstar, you can test your mettle in the Infinite Cave Neo, an endless mode where you see how far you can make it in an endless, randomly generated cave.

Additionally, Spelunker HD Deluxe can also be played with up to six people either online or via couch (if you have a really big couch) multiplayer. Unfortunately, I wasn’t able to find any online games to participate in. Which, given the niche nature of the title, is pretty understandable. However, I was able to take the couch multiplayer for a spin and found it to be fun, albeit chaotic (in a good way). My main issue with the multiplayer is the screen size when playing in split-screen mode can make it difficult to spot traps or judge your jumps properly. Which, as you can imagine, exacerbates some of the problems I mentioned earlier in this review.

Spelunker HD Deluxe Will Test Your Skills And Patience

Spelunker HD Deluxe isn’t going to appeal to everyone. The game is unforgivingly difficult, and many of its more frustrating mechanics would have been better off left dead and buried in 1985. However, those who can look beyond these quirks will find there’s plenty of fun to be had deep underground. With clever stage designs and an addicting loop that will have you saying “just one more go,” it’s bound to appeal to fans of the series or players who just want a good challenge. If you don’t find yourself in either of those camps, you might just want to remain topside.