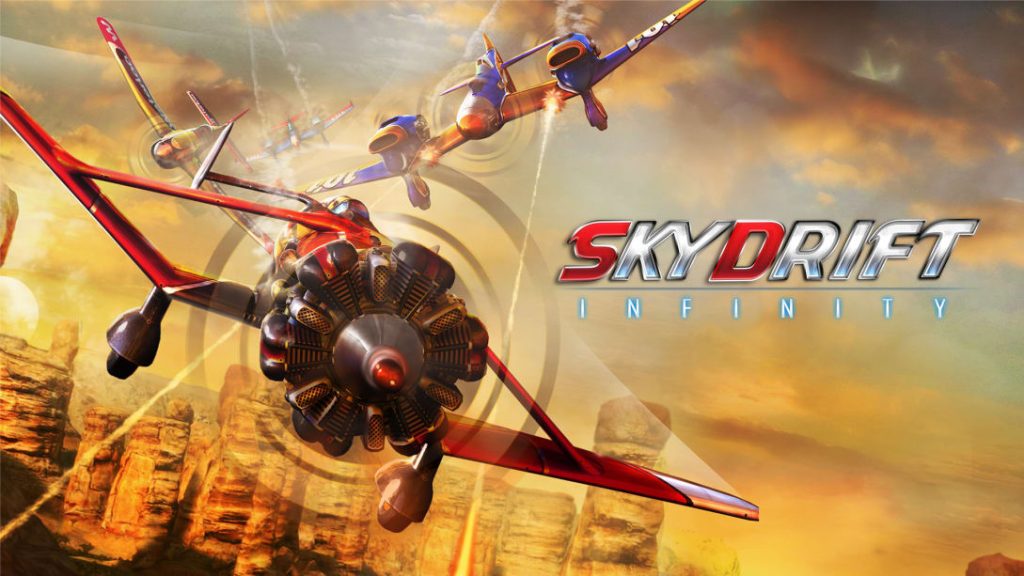 When I was growing up in the early 90s, my dad and I didn’t share much in common. However, there was one area where we bonded: our love of arcade games. For a time, we’d sneak out on Friday nights to hit up the local bowling alley where we’d spend countless quarters blasting away  T-800s in Terminator 2: The Arcade Game or heavily-armed crooks in Lucky & Wild. But if there was a game we couldn’t get enough of, though, it was Daytona USA. SEGA’s now-iconic 1994 racer became our religion for a Summer. And while I don’t remember winning many races against my old man, I loved every minute of it and credit the game with cementing my love for arcade racers. Now, I can’t get enough of ’em. From hits like Hydro Thunder to San Francisco Rush: 2049,  I’m always down for some white knuckle arcade racing.

First released for consoles and PC in 2011, SkyDrift Infinity perfectly captures the spirit of the classics from that era. It’s a high-flying combat racer where you take to the skies in an eclectic variety of planes as you blast and buzz your way across the finish line. Now, a decade after its debut, THQ Nordic and HandyGames have scheduled a return flight for the PS4, Xbox One, and Switch. With gorgeously overhauled visuals and buttery smooth 60fps gameplay, it’s a budget-priced flight no fan of the combat racing genre should miss. 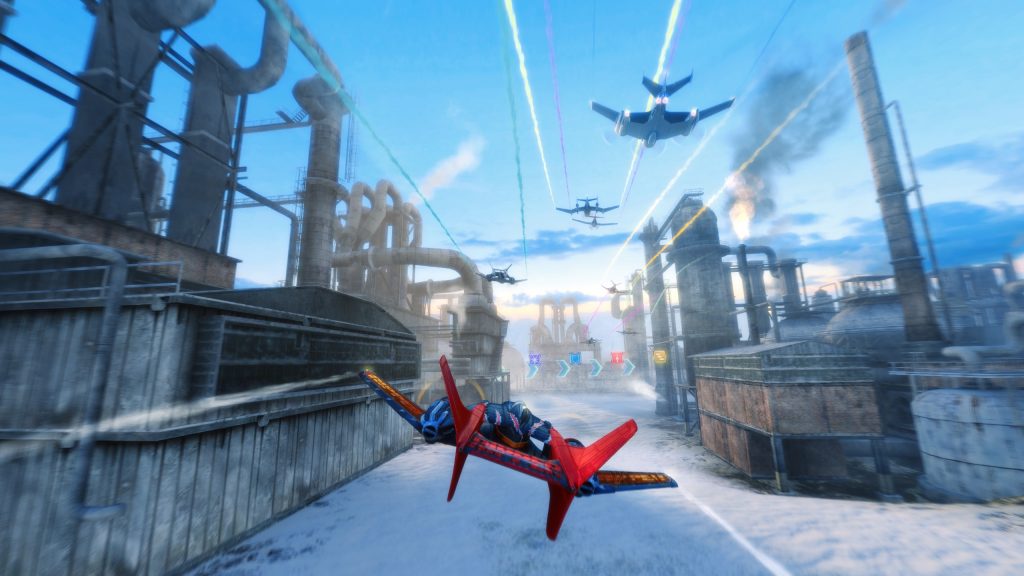 SkyDrift Infinity can best be described as a fusion of Wipeout and Crimson Skies. Players pilot an assortment of planes, from agile fighters to burly yet sturdy bombers, and participate in various races. As you cruise the courses, you’ll collect several types of power-ups to help you get the upper hand. Weapons range from missiles that can lock onto rival racers and blast them to the skies, while machine guns pepper them with hot lead. Mines are perhaps my favorite, however. There’s nothing more satisfying than deploying one of these explosive surprises in a narrow crevice, only to hear an unexpecting racer explode into a fireball in the distance.

In addition to these weapons, you’ll also collect several types of support items. For example, there’s an electric blast that can slow the planes of nearby opponents, along with self-explanatory items such as repair kits and shields. You can equip two of these items at once. And if you pick up two of the same item, that particular ability will become more powerful, causing your guns and missiles to chew through enemy racers effortlessly.

No, none of these items are particularly over-the-top. But they all serve a useful purpose. And, most importantly, they’re a blast to use. 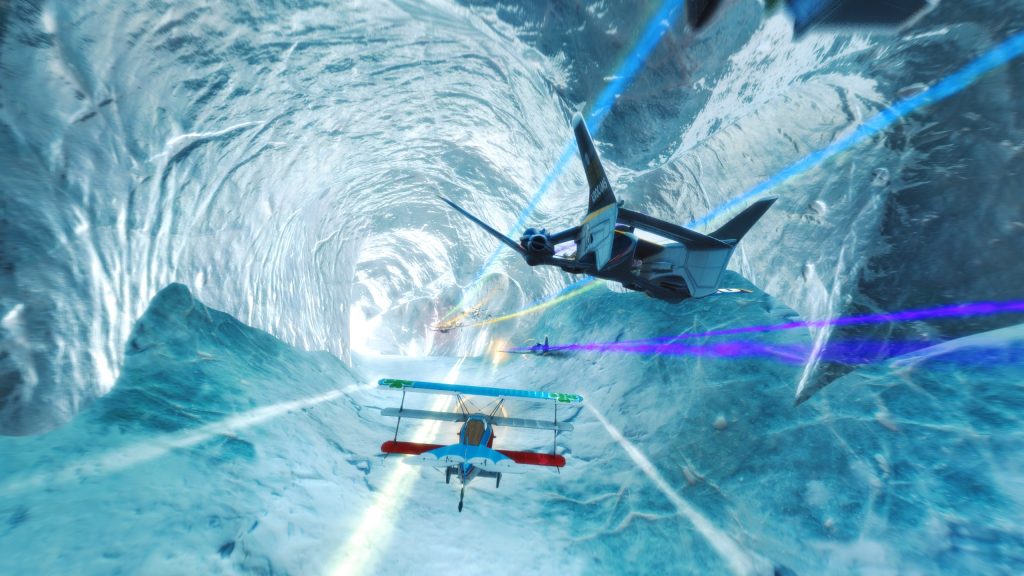 Campaign mode is the meat and potatoes of SkyDrift Infinity‘s package. It’s set across 7 stages, each with a handful of races you’ll need to complete to advance in the circuit. Three race types are available, each adding its own unique twist to the game’s racing formula.

Power Races play out similarly to a kart racer. It’s a race to the finish as you complete laps, collect items, and blast your opponents to smithereens in an effort to make it to the head of the pack. As far as combat racers go, this mode is about as standard as they come. However, that doesn’t mean it’s not exciting. With 8 heavily-armed racers vying for the gold and power-ups scattered around everywhere, competitions quickly become explosive and immensely satisfying displays of airborne annihilation.

Speed Races do away with the power-ups altogether. Instead, the track is filled with rings that, when flown through, give you a slight speed boost. Hitting one ring, you might not even notice your plane accelerate. However, fly through half a dozen, and you’ll find your jet hurtling through the sky a bat out of hell. Of course, taking a lightning-fast plane like the Speedster Pro2 into one of these contests all but guarantees you’ll be smashing into the canyons unless you’re a skilled pilot. But fiery crashes be damned, it sure is fun!

Last but not least comes Survivor Races. These are elimination-style challenges where a timer will count down. And, once it reaches zero, the pilot in the last place is eliminated. I found these races to be especially exciting. There’s nothing quite like shooting down an opponent and whizzing past their position at the last second to snatch victory from defeat. Needless to say, it’s really exhilarating stuff.

SkyDrift Infinity Keeps Your Head In The Clouds 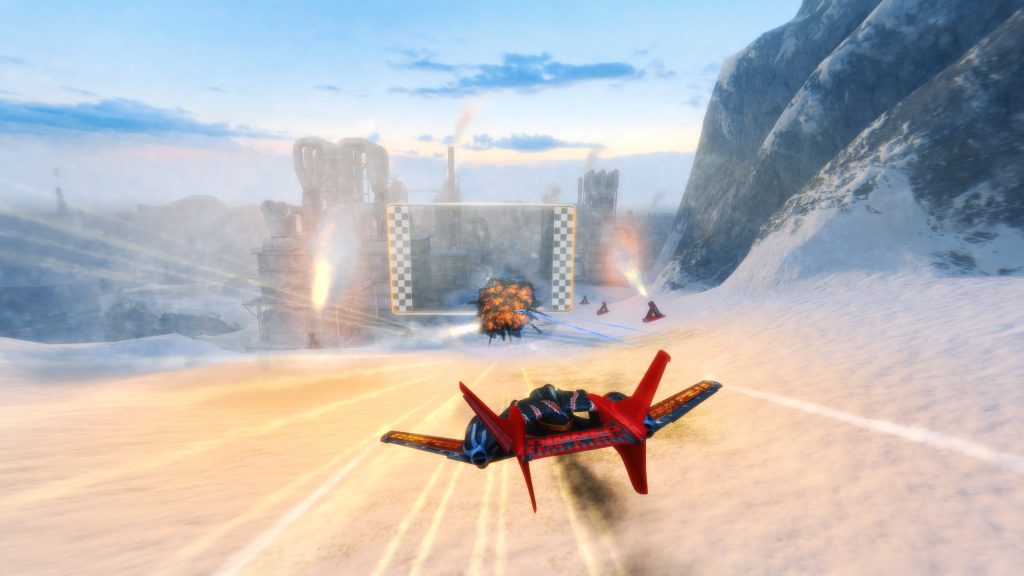 Winning these races will net you new planes and ultimately amass a total of 16 aircraft in your fleet. There’s a welcome variety here. From a WWI-inspired vintage Tri-Wing to more sleek speed demons like the Stallion Turbo. And they all have their own speed, boost power, acceleration, maneuverability, and armor ratings to consider.

However, if you’re looking for more exotic, you’re in luck. SkyDrift Infinity also introduces a handful of new planes based on other THQ Nordic properties. So if you feel like getting behind the yoke of Sine Mora’s B54-VR Soprano or a fighter from Earth Defense Force, have at it! Hell, you can even hop into the cockpit of a pair of Darksiders-inspired craft with themes based on series protagonists Death and War if you feel like channeling your inner Horseman.

As you can probably tell by now, I really enjoyed the time I spent with SkyDrift Infinity. From its frantic dogfights to its buttery smooth performance, it’s a game you can just hop right into and enjoy. And with four-player split-screen support, it’s the perfect game to fire up over a few beers with friends.

It’s worth noting that SkyDrift Infinity also supports online matches. Sadly, during my time with the game, I was unable to find any to jump into. Here’s hoping the community grows over time. Because what’s here is an immensely fun experience that no fan of the combat racing genre should miss out on. My only real complaint is that there are only six tracks to race on. And, after a while, they do start to feel pretty stale to the point that the campaign gets to be a bit repetitive. Still, the ability to race in mirror versions of each course helps somewhat.

At the end of the day, SkyDrift Infinity accomplishes just what it sets out to do: deliver a fast, frenetic, and furiously fun arcade racing experience. With a wide selection of planes to unlock and addicting multiplayer (at least in local play), it’s sure to be a hit at your next gaming get-together. So if you’re a fan of the arcade racers of the 90s or simply missed SkyDrift Infinity when it was first released, there’s never been a better time to earn your wings.