Older men declare war. But it is youth that must fight and die. 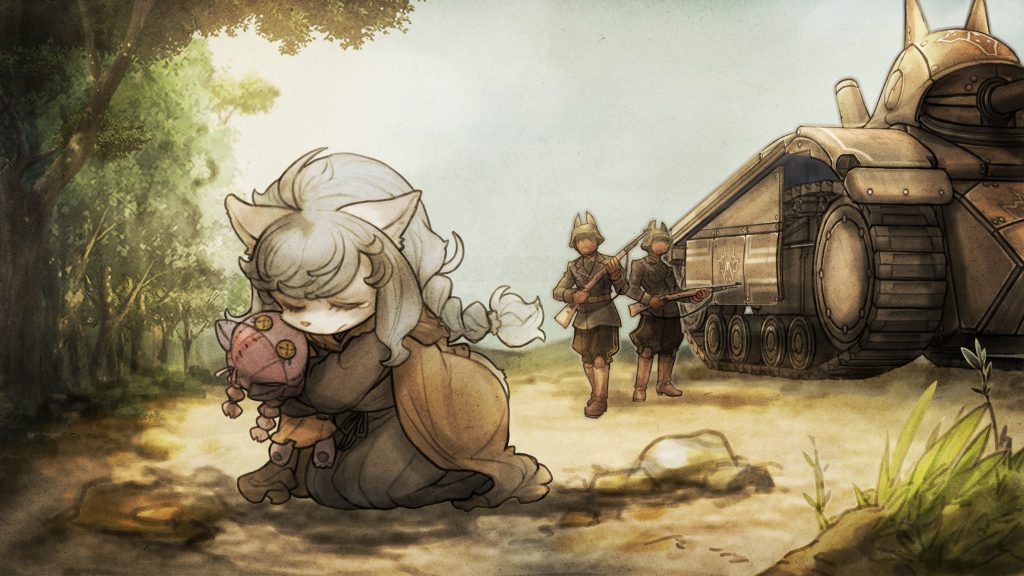 A tranquil village is nestled snugly on the far end of The Free Lands of Gasco, a floating continent in the clouds. In it, children play in the bucolic pastures, laughing and frolicking without a care in the world. To the detriment of the peaceful folks in Petit Mona, the sweet air and gentle breezes didn’t carry the winds of warning; the Berman army would march on these unassuming civilians, destroying their homes and taking all souls alive — unless they put up a fight. But the village’s youth heeded a strange voice that lead them to their only shot at salvation — their metallic god, the Taranis. With this behemoth-like tank, children as young as four years old could wage war on the soldiers who had taken their families and fight to reclaim their loved ones… at any cost.

So begins Fuga: Melodies of Steel, the fourth installment of the Little Tail Bronx series by legendary video game artisans CyberConnect2 (.hack//, .hack//G.U.). Although this story takes place within the world of the Little Tail Bronx series, playing the earlier titles is not a requirement to jump into Fuga: Melodies of Steel; in fact, the games are all quite distinct from each other, featuring not only different worlds and characters but trying out completely different genres as well. Where the first game was more of an action-adventure platformer and the second an action RPG, Fuga: Melodies of Steel is more of a turn-based strategy RPG where multiple characters must work together to gun one tank. The mechanics appear simple at first, but within a few hours, casual curiosity turns into a full-blown addiction. 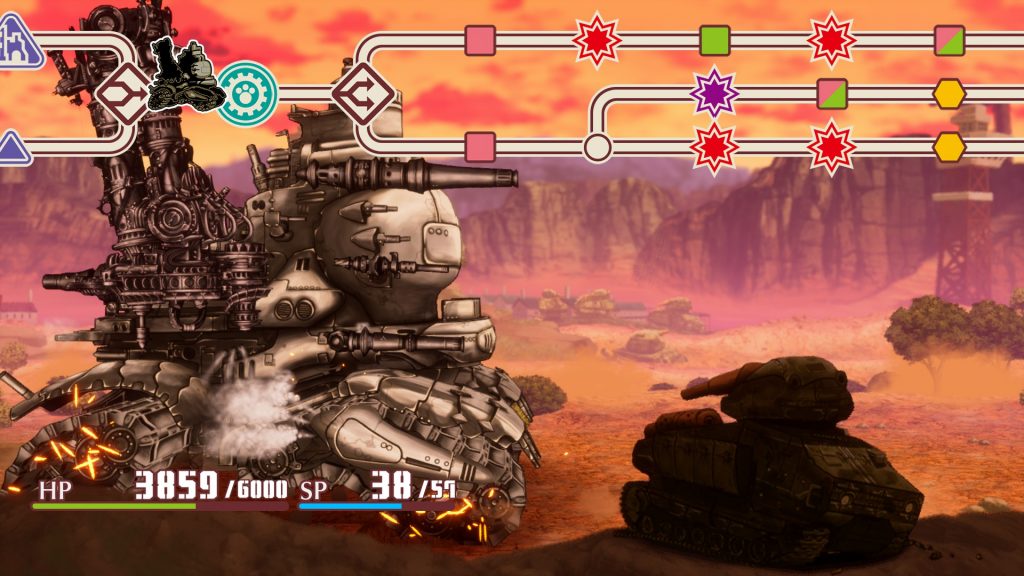 Fuga: Melodies of Steel’s website describes the game as a tale depicting hope and despair, but there’s definitely a lot of trudging through the latter before obtaining a sliver of the former. After finding refuge in the gigantic belly of the Taranis, the children discover they can not only drive the tank, but gun it; a mysterious voice on the radio tells them to take down the German Berman army in an effort to free their loved ones. At first, they blindly oblige, until the stakes get a little too high, in which case the Soul Cannon is deployed, its use encouraged. At this point, players much choose one of the children to sacrifice as bio-energy for the Soul Cannon — the death of one child will pave the way for the rest of them to press forward.

Like, don’t get me wrong, I love the kind of despair high stakes games like Frostpunk and This War of Mine can bring, but vaporizing a darling four year old in order to utilize a weapon of mass destruction within the first ten minutes of the game is pretty heavy stuff. 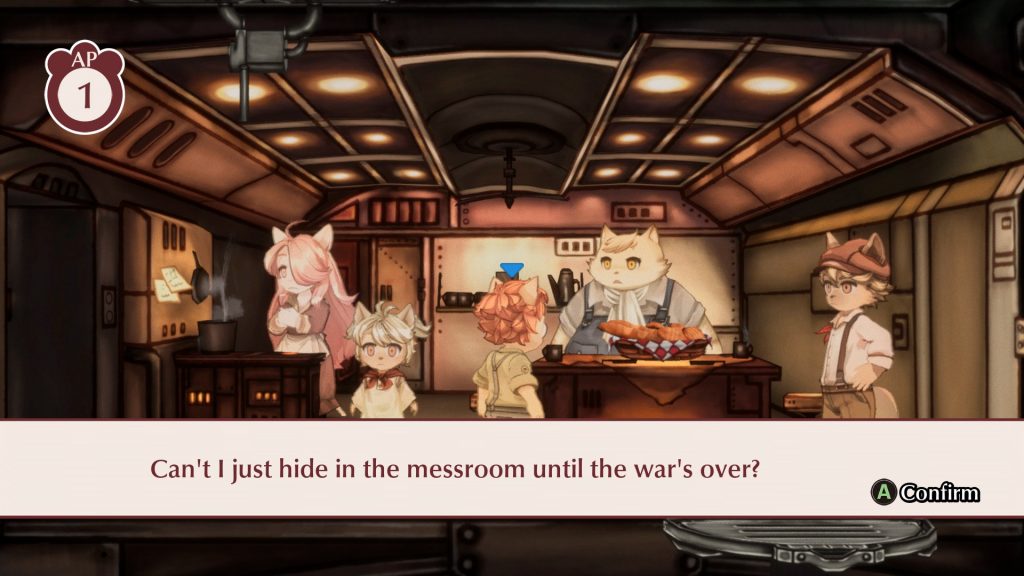 Luckily, the game allows you to walk back the decision with a grim warning: use the Soul Cannon again and the consequences will be permanent, so sacrifice children sparingly and only when there’s no way forward.

I’m not going to lie, I had to actually put my controller down and take a shower to process what had happened after this surprisingly emotional tutorial. It’s a pretty big ask for players to get through the first few minutes of the game, but those that stick with it will be richly rewarded with all manner of mechanics to keep them busy. Obviously there’s the fighting, which is turn-based goodness that older JRPG fans will feel immediately comfortable with, but there’s also the side-scrolling spelunking missions that allow characters to unearth valuable crafting materials. Of course, who could forget the Taranis itself, where each room holds a different purpose, such as a farm to grow food, a messroom to cook said food, a dormitory to rest, a workshop to improve guns and armor, and even an area to fish for materials! The children may have lost their village, but there’s a thriving little community within the belly of this behemoth. 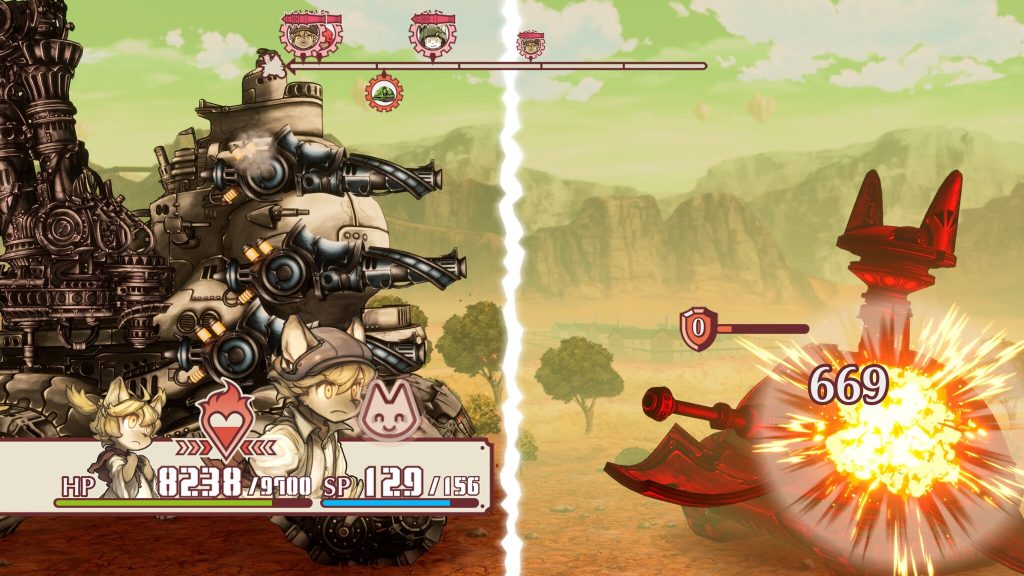 Additionally, there’s a huge relationship component that permeates the entire game, from the relaxed intermissions to the battlefield. By participating in activities such as cooking food, sharing meals, doing laundry, or simply talking to each other, the children foster relationships with each other. Increasing their relationship level provides a chance for their link events, or short conversations that offer insight into their personalities and dynamics. These will also improve their link attacks on the battlefield, which can often make the difference between surviving or having to start that leg of the journey again from the beginning. By carefully maintaining relationships and moods, the children will strengthen their bonds, their resolve, and their ability to fight back against this dog-eat-dog empire.

I’ve saved the best for last — the fighting. The tank moves from point A to point B in a linear, side-scrolling fashion, but there are branching paths that allow you to choose your desired difficulty. Selecting the easiest route easily ensures you’ll live to fight another day, but picking the normal and even dangerous routes will provide more experience, fortifying the children for the inevitable boss battles. At first, it’s easy to think you’ll only play for an hour or two, but it quickly becomes apparent gameplay is measured in routes. “Just one more route and I’ll put the controller down” I kept promising myself, while battle after battle waned and literal days had passed in a flash. It’s engaging, it’s exciting, it’s epic, and it’s especially guilty of exploiting that “one more turn-itis” feeling games like Civilization does so well. I’m hooked!

From the beautiful art and ethereal music to the addicting gameplay and loveable cast, Fuga: Melodies of Steel is easy to recommend to any fan of turn-based, strategy RPGs. It’s got everything that players love mechanically, but it’s blended in such a fun and innovative way that it feels simultaneously fresh and familiar. Complete with an invigorating story set against a soundtrack that was more like .hack// than anything I’d heard in a long time (felt indescribably amazing to listen to),  Fuga: Melodies of Steel should absolutely be on your radar. Just… try not to use the Soul Cannon; yeeting four year olds at enemies does not for a good war strategy make.

Editor’s note: This review is based on a copy of Fuga: Melodies of Steel provided by the publisher.