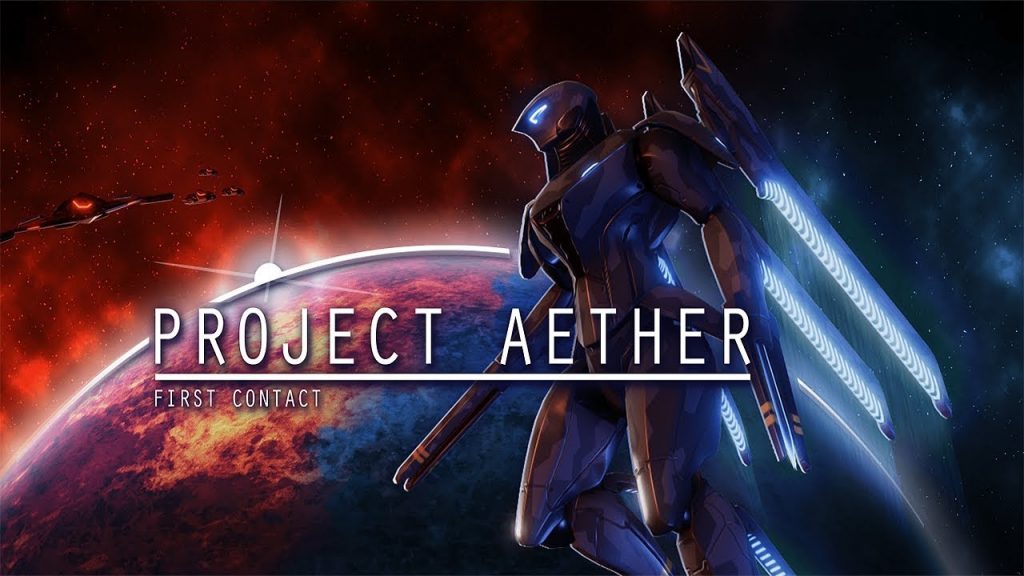 First released on PC in early 2020, Project Aether: First Contact has finally made its way to the Switch. Developed by Sleepy Spider Studios, it blends the twin-stick blasting of Geometry Wars and Destropolis with the bullet hell action of games like Ikaruga and DoDonPachi Resurrection. With a fun anime-style story and a variety of weapons and upgrades to master, it’s a solid score chaser that should keep fans of both genres entertained for a few afternoons. 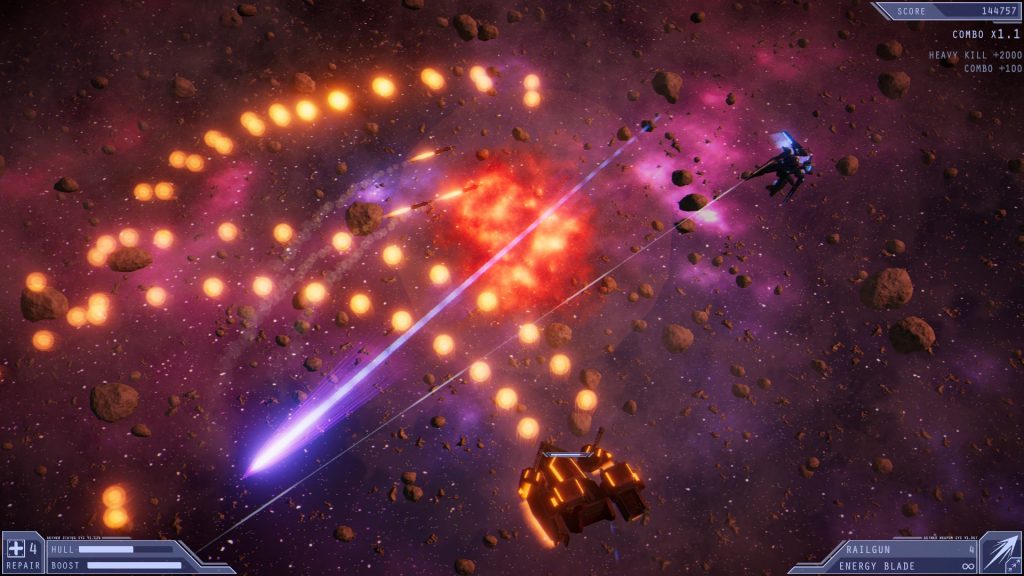 Project Aether’s premise is a familiar one, but it gets the job done. Mysterious alien spacecraft are menacing the solar system. It’s up to Captain Theresa Martins to pilot Aether, a powerful prototype mech, and beat back the alien menace once and for all. Again, it’s bog-standard stuff, but a perfectly good excuse to go on and blast some space baddies to bits.

When you first start the game, you’ll have access to three weapons. The machine gun is your standard workhorse of a weapon, dealing rapid light damage to your enemies. On the other hand, the rail gun is slow but hits hard. The best part? Its rounds even punch through enemies, allowing you to wipe out entire columns of enemy ships with a single blast. Lastly, you begin the game with a sword that deals moderate damage and can amplify an enemy’s EMP field.

EMP field, you say? This feature is actually one of Project Aether‘s more interesting mechanics. Once you deal a certain amount of damage to an enemy, a large circle will form around them. This circle is their EMP field. If you fly into this area and press the right bumper, you’ll activate your reactor and destroy everything in the EMP’s range.

While it’s perfectly possible to fumble your way through the easier difficulties without worrying too much about EMP fields, mastering this technique becomes absolutely essential when playing on the game’s Hard or Intense mode.

Add to these abilities a dash mechanic, which gives you momentary invincibility, and you have a pretty solid selection of techniques to keep the action interesting. 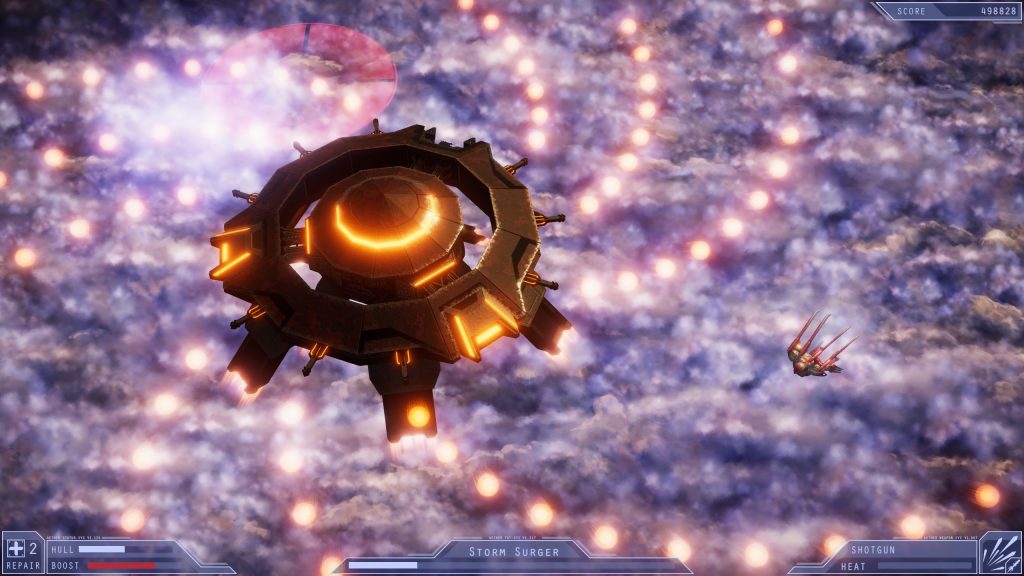 The gunplay feels fine, though your shots lack any real impact. The Aether’s controls are nice and responsive, and weaving in and out of enemy fire feels effortless. You’d think managing multiple weapons, a dash, and melee attacks in the midst of all this chaos would be overwhelming. But that’s hardly the case here. Swapping between your two available guns while smacking away missiles with your blade feels seamless. I also believe the game does a solid job of easing you into the action so that you can master the fundamentals before the gloves come off. During the first few missions, I found myself regularly making rookie mistakes and paying with huge chunks of my health bar. However, by the time I reached the final level, I was effortlessly dancing through waves of enemy fire and cleaving my foes to bits like my sword was a two-story Ginsu knife.

Project Aether: First Contact’s campaign spans nine missions. Each lasting about 10 minutes, these stages run the sci-fi gamut to crumbling asteroid fields, dead moons, earthlike worlds, and frozen planets blanketed in thick ice. As you soar through the skies and cosmos, waves of enemy ships will appear from off-screen. Some lob large but slow-moving balls of plasma or attempt to ram your mech head-on. Other, more menacing enemies can church out dozens of projectiles at once or concentrated energy blasts that chew through your armor.

Chew your way through a dozen or so waves of enemies, and it’s time to fight the stage’s boss. As you’d expect, these are generally just large, more imposing ships with more complex shot patterns. However, they’re generally not too hard to bring down. So don’t go expecting the kind of manic boss battles you’d find in your average Cave production. Their shots move slowly and most attacks are clearly telegraphed. Just as long as you focus on blasting their turrets and know when to dash through their curtains of fire, you shouldn’t have too much trouble with the game’s boss encounters. 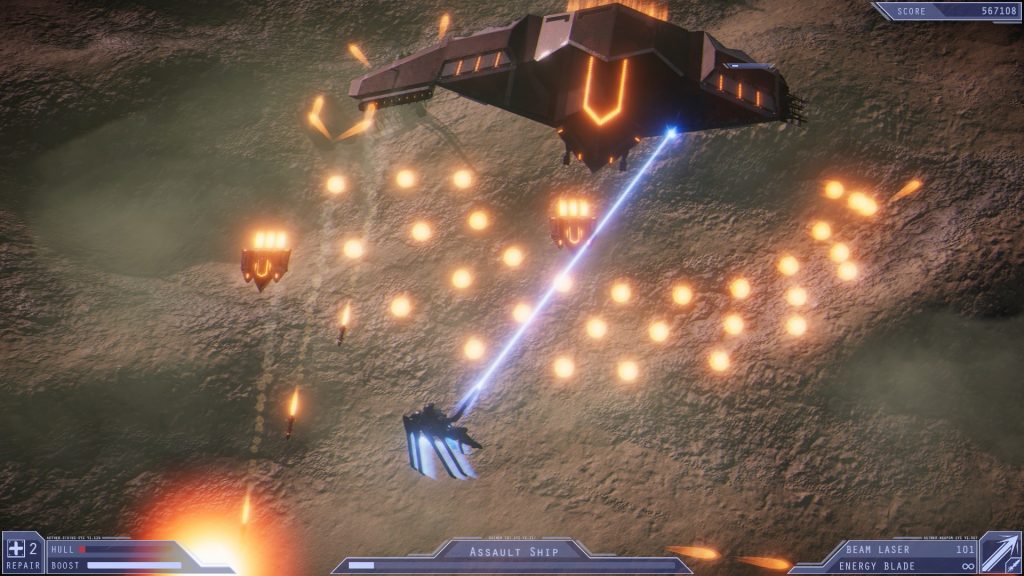 As I said earlier in this review, your arsenal is pretty humble at the beginning of the game. However, as you complete missions you’ll unlock a wealth of weapons and upgrades to wield which can drastically change your play style. From scatter rockets that unleash a salvo of destruction, concussive shots that can push ships around (which is great for maximizing your EMP field damage), and shotguns that deal close-range death, there are plenty of toys you can play with beyond the game’s initial two weapons.

Of course, your weapons aren’t the only things you can customize. You’ll also unlock new EMP types, which can do cool things like increase your damage output or generate a temporary shield around the player. Additionally, dash modules can change your evasive dash to an all-out force of destruction as you ram anything that gets in your path, or even allows you to teleport outright.

I had a lot of fun experimenting with the various loadouts I could create. Switching up your assortments of weapons and modules adds a welcome layer of experimentation to Project Aether. And trust me, it needs it. You can blast your way through the game’s nine stages in about an hour and a half. Still, with four difficulties to choose from and extras including Survival and Boss Rush modes, it’s hard to argue you’re not getting your $10 worth here. 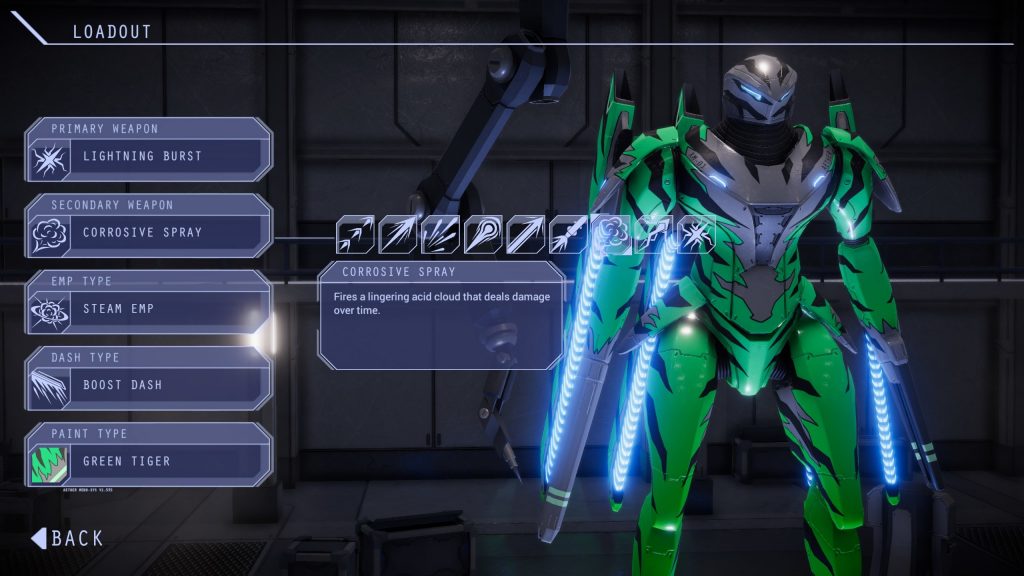 While Project Aether plays great on the Switch, its presentation leaves a lot to be desired. For starters, the player and ship models are very barebones, with basic geometry and minimal details. Add to this a real lack of ship variety and you have a game that doesn’t make a great first impression. What’s worse, the backgrounds are a blurry mess. They’re largely just large, static images covered in thick, ugly pixels. It’s an effect that’s especially rough looking when the background scales toward the screen as you descend onto whatever planet or moon you’re hovering above. Thankfully, this is an issue that’s less noticeable in handheld mode. However, when playing on my 86″ at home, it was hard to ignore just how unpolished the game’s visuals were.

Project Aether’s sound effects don’t do the game any favors either. They lack any weight or sense of impact, which makes even your most powerful weapons feel like space-age pea shooters. Rail guns and plasma beams sound like broken squirt guns, while shotguns and explosions lack any real bass to bring the action to life.

Despite these shortcomings, one area where Project Aether shines is its soundtrack. Where the game’s sound effects fall flat, superb electro anthems save the day, turning each stage into a veritable bullet hell rave. Seriously, just give it a listen yourself. It’s the stuff sci-fi dreams are made of, with a dash of early 2000s futurepop vibes for good measure.

Disappearing Into The Aether

With its bite-sized campaign, this title probably isn’t going to keep you busy for too long. However, between the game’s various difficulty modes and an assortment of unlockable weapons to experiment with, there’s more than enough here to keep you glued to your Switch for a weekend. If you’re a fan of both twin-stick and bullet hell shooters and are looking for a game that scratches that score-chasing itch, Project Aether: First Contact delivers just that.