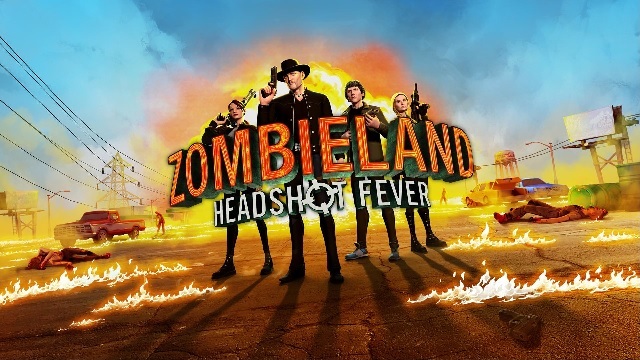 After watching and enjoying Zombieland and Zombieland: Double Tap in theatres, I really hoped that Zombieland VR: Headshot Fever would continue doing the series justice. But does the combat play well with the witty jokes and casual gameplay, or does it leave the taste of a stale Twinkie behind with an outdated format?

When I first started Zombieland VR: Headshot Fever, it pleased me to see just a bare couple of settings to tweak. Hand color, left or right-handed, standing or sitting, then you’re off! Your first mission is a brief runabout clearing out some stragglers and makeshift targets in your soon-to-be mansion base with a single W1911. 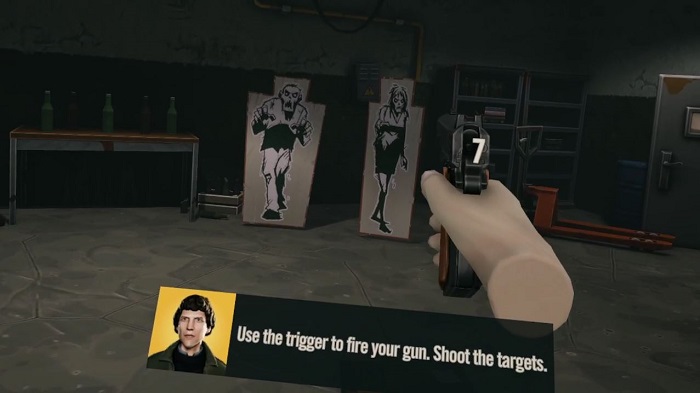 Be cautious of how you tilt your wrist; it can mess with your ability to aim.

With the introductions out of the way, you’ll then meet up with the four main characters from the movies. The only original cast member who didn’t make it was Woody Harrelson, with Tallahassee being played by his brother, Brett. There’s not much in the way of dialogue, but it checks out in keeping in character. You’ll have four different stations you can go to from your spot. You can go to the mission select, the armory where you can customize your guns and perks, the shooting range where you can practice your marksmanship with some non-lethal targets, and, finally, a place to view achievements. You’ll only have the mission select to go to at first, but play through the “tutorial” parts of the game, and you’ll get introduced to everything in due time.

The next thing to look at is how you look around. The VR gameplay was smooth as butter damn near the whole game. I played using a 1080 TI on a Rift S, and it played perfectly fine. The game’s lowered, non-demanding graphics will feel at home even on base model VR units and mid-tier GPUs. Speaking of graphics, they aren’t made to wow, but definitely don’t look awful with a cartoonish style that does make it easier to distinguish foes from the environment. The zombies’ heads stick out well and are a decent size, so you aren’t trying to headshot something the size of an orange.

So how do the guns feel? They’re the most vital part of the game, and they’re in a very interesting position. You can only have two guns: a pistol and a special weapon that has limited ammo. They don’t have much weight, no recoil really to speak of, reloading is simplified, and weapon choices are limited to only a few guns. The most you’ll get towards gun customization is changing the paint job, and you can do a few general upgrades by spending some in-game currency. Normal VR games would likely shudder at this, but this is perfect for what this game’s going for. It doesn’t want anything getting in the way of its hectic run-‘n-gun light gun-style gameplay, and everything I listed above helps it do just that. You need to keep loaded at all times, even after spending a single bullet, reload. If you’re done killing a zombie and even have a second to spare, reload. Keep your guns maintained, or you will run out at the worst possible times.

What you’ll try to do.

What will probably end up happening. More times than you’ll care to count.

Reloading is quick and simple; when you flick down on the stick, you’ll drop your mag, and a fresh one will appear right about your belly region. Slam the mag in, then keep firing. Enemies will drop TP, the game’s currency. Also, you only get one hit, and you’re done. The big trick here is doing headshots. Double-tap the head and, not only will you go into a Bullet Time mode where everything slows down. However, that time you spend in there will be subtracted from your total time, so stay in that mode as much as possible. You can also get that bullet-time mode started by shooting objects out of the air that get thrown at you.

Don’t worry. You’ll get used to looking up, wondering what’s about to bean you in the dome.

You’d think this would make the game lean towards accuracy, but remember that the game does NOT keep track of accuracy (unless the missions for that run state “Do Not Miss”). It wants you to keep your Adrenaline up. Accuracy by volume of fire is totally applicable here. It took me a few rounds before I realized it was absolutely fine to spam rounds as fast as I can if it means scoring that extra headshot.

The first eight missions are set in stone, and the enemies will always be right where you saw them last. The key here is to figure out how to take care of them in the most efficient way possible. Every mission will have four objectives, each with its own rewards. You’re looking to get at least fifteen, so you can unlock the Zombieland Invitational, basically the penultimate level and the hardest of the bunch. There’ll be several different kinds of “special” infected along these runs, from Homers that you take a penalty for shooting to Throwers that’ll yeet random crap at you that’ll blind you for a moment if you’re hit. The game will not be afraid to throw several of these at you at once at later levels.

These aren’t even the most annoying ones either.

The gameplay as a whole here is meant to invoke the feelings of old-school arcade games such as Area 51, The House of the Dead, Time Crisis. If you’ve ever seen these in a local arcade, think of Zombieland VR: Headshot Fever in that light. Shoot enemies, move to the next area, shoot more enemies, move to the next area. It’s the placement of the enemies and how you deal with them that adds the needed spice to make this interesting. Adding in the time trial function makes this a speedrunner’s dream. So on top of being a very competent light gun-esque arcade game, it’s letting you strive for the best times in the process. The drive to go faster, be more efficient, and aim for accuracy is all there at the forefront.

From here, though, we start seeing where things start to drop in quality. While it’s great to feel the accomplishment of going faster, there’s not much else here. Some achievements and leaderboards are the only things at the end of the short road because, after the Invitationals, there’s just you going faster. You can get some of the objectives, but that’d put you on the same level doing the same song and dance over and over. Whether this is bad or good is more up to the individual. For just twenty bucks, many people will get what they want, and then some, while some might be longing for more. This is the kind of game you’d play for maybe half an hour to an hour, then retire for a few days. This is fine, but I do hope there’ll be more in the way of content delivered down the lines. I’d love to see some more guns, at the very least.

The ultimate thing to keep in mind if you want to enjoy this game is that it is absolutely vital you play this like an old light gun game. Don’t go in expecting depth or length because there isn’t much here. It’s meant to play like an arcade game: short, sweet, and to the point. That’s the whole idea, and once you get that ingrained in how you play, it becomes the best damn arcade shooter you’ll play in a long while. No complicated systems, no powerups, not even much in the way of plot. Just you, zombies, a bit of witty banter, and the fastest gunplay this side of the urban jungle. I’d say for a mere $20, Zombieland VR: Headshot Fever has more than enough heart to satisfy that arcade itch while leaving more than enough room to grow into something even better down the road.