Within The Blade Review: Be My Lo-Fi Samurai 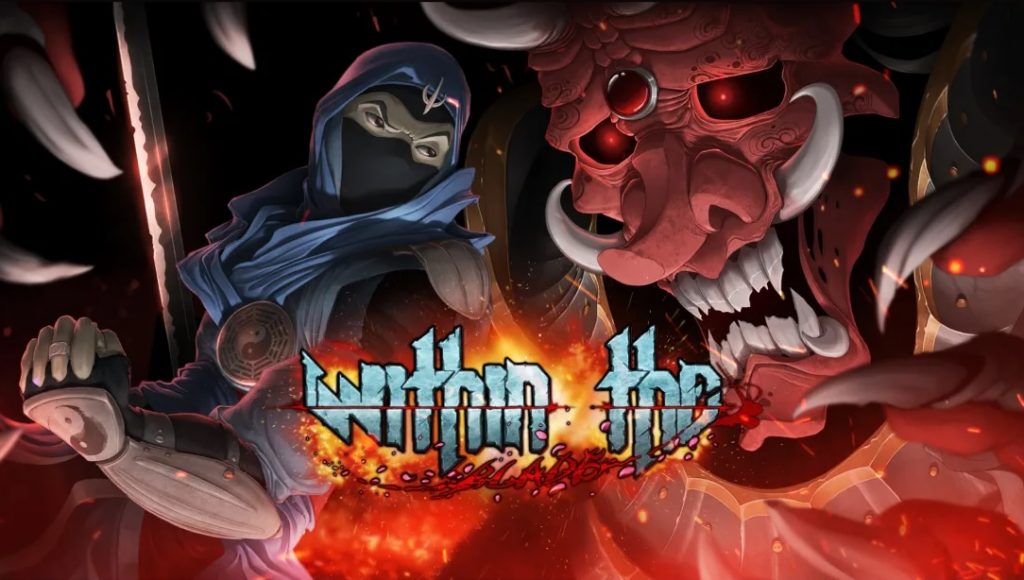 It’s not often that a game throws me entirely for a loop. However, indie developer Ametist Studio’s Within The Blade is a title that completely defied my expectations. First released on Steam in 2019 as Pixel Shinobi: Nine Demons of Mamoru, the game looks, at least at first glance, like a pixelated throwback to such coin-op ninja classics as Shinobi and The Legend of Kage.

But that’s not entirely accurate. While its chunky, lo-fi visuals would be right at home in some dimly lit arcade straight out of 1987, Within The Blade feels more like a deconstructed Tenchu than anything else. Demanding stealth, patience, and careful resource management, it’s an experience that cuts surprisingly deep for a game that looks like a relic of gaming’s simpler days. Unfortunately, despite the game’s surprisingly robust mechanics, myriad technical and design issues dull the edge of Within The Blade‘s otherwise exciting take on a classic formula. 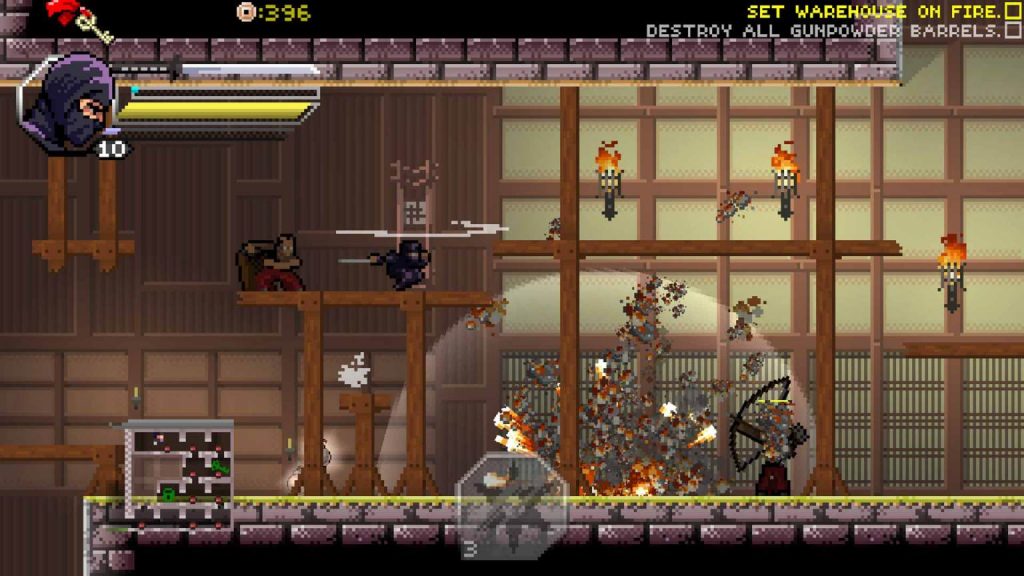 Set in 1560 AD, Within The Blade tells the story of a Black Lotus ninja named Hideaki, who is tasked with battling the vile Steel Claw clan and their demonic allies. Using stealth, cunning, and a grab-bag of lethal ninja tools, Hideaki’s journey takes through the forests, villages, and towering fortresses of Feudal Japan to complete his mission.

Hideaki is fast and agile. He can unleash rapid-fire sword combos, double jump, and even wall-run. With this mix of speed and power, it can be tempting to rush in and just hack away at your opponents. However, this approach is ill-advised. You’ll quickly learn that running in and swinging your sword wildly only leads to a messy death at the hands of whatever bandits or flesh-hungry demons you come across.

The enemies in Within The Blade are tenacious and put up a good fight. To make matters worse, false floors that lead to death traps like spikes and swinging guillotines that can kill you instantly litter every stage. That said, it’s often best to take a slow and steady approach to clear each level. Sticking to the shadows or crawling behind cover to perform silent executions becomes essential. As once you’re spotted, enemies will pounce you in numbers, and you can only take a few hits before you find yourself back at the nearest checkpoint. 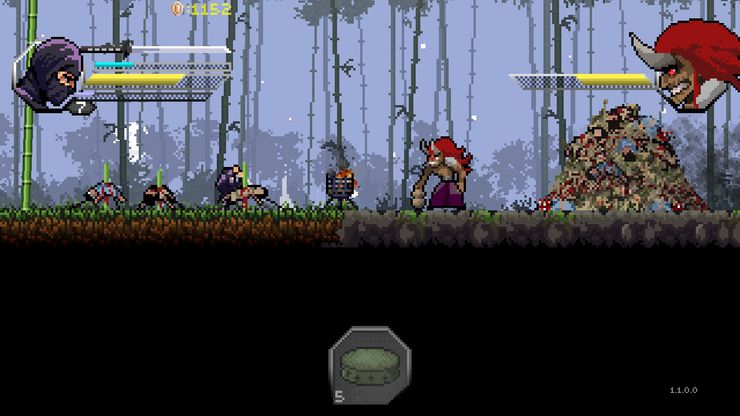 With hordes of enemies standing between you and the end of each area, you’re going to need some help if you hope to survive. Thankfully, this is where your ninja tools come in handy. Throughout the game, you’ll come across and be able to craft dozens of devices that can help you get the upper hand on your opponents. These range from caltrops and land mines that are good at taking out patrolling grunts to shuriken and poisoned throwing stars that you can use to quickly and quietly dispatch threats.

Hands down, my favorite tools to use were smoke bombs and flashbangs. The reason being, I could quickly approach any stunned baddies to perform gruesome one-hit execution moves, which makes taking out more fearsome foes, like nimble kusarigama-wielding assassins and burly armored knights, so much easier.

You’ll unlock skill points that you can spend in the Black Lotus village as you complete levels. These allow you to do cool things like craft new items, survive poison clouds that can zombify you, and unleash more devastating abilities. These new talents give the game a satisfying sense of progression and encourage you to complete bonus objectives to maximize the experience and cash you earn at the end of each stage. 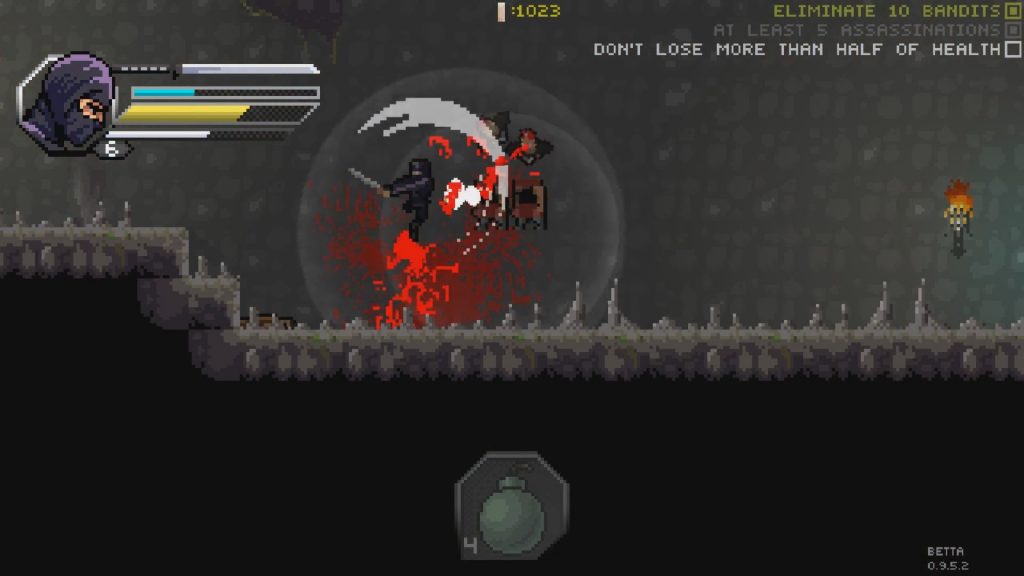 However, no matter how carefully you play, eventually, you’re going to find yourself going head to head with hordes of enemies. And when this happens, Within The Blade‘s otherwise exciting ninja antics can become an exercise in frustration.

Most of the game’s problems stem from its overly sensitive controls. To put it mildly, Hideaki handles like a hamster on methamphetamine. For example, my attempts at wall-running often sent my character pinballing around the screen and straight into a spike-laden pitfall. Oftentimes, merely trying to slash an enemy can send you overshooting by a wide margin. And, as you’d imagine, leaving your back wide-open for a stabbing. Eventually, I was able to adapt to the game’s squirrelly controls. Still, they never felt comfortable.

Another area where Within The Blade stumbles is its checkpoint system.  Represented by lamps scattered on the ground, they’re often surrounded by enemies. This makes it very easy to find yourself overwhelmed whenever you start at one. This wouldn’t be so bad if you could pause the game to access your inventory and quickly switch to whatever tool you need to avoid taking damage. Unfortunately, inventory management is clunky and handled in real-time. By the time I could equip whatever item I needed to fend off the half-dozen baddies surrounding me, I’d already taken a beating.

Situations like this became such a hassle that I’d sometimes find myself just trying to run as fast as possible to reach the end of the level, rather than playing the stage as it was meant to be experienced. 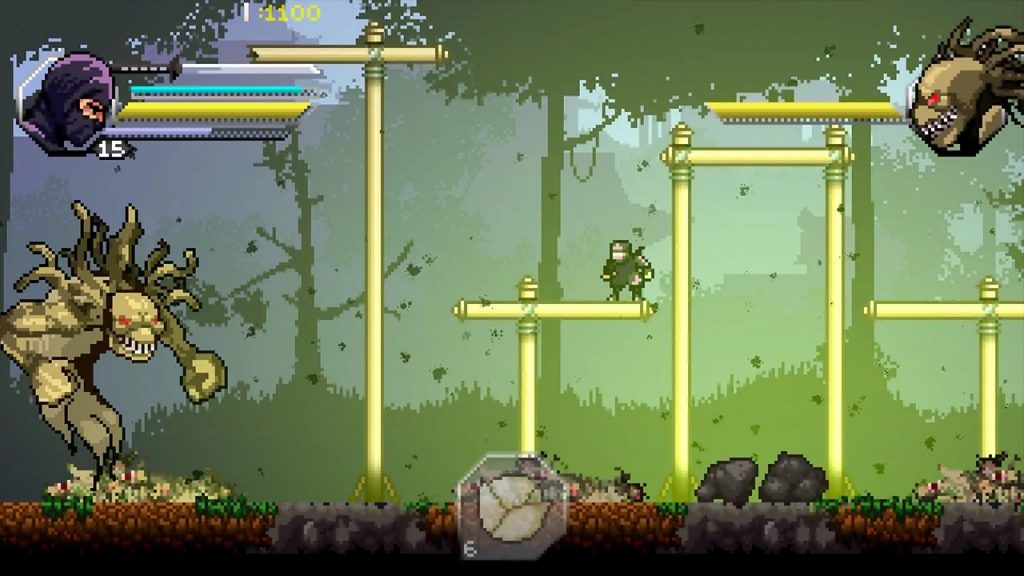 Unfortunately, these issues don’t just extend to the moment-to-moment gameplay. The game’s dialog is filled with such golden lines as, “where this disease came from?” and “ceise him!”, just to name a few. While I can forgive Within The Blade‘s less-than-stellar localization, the U.I. issues are beyond redemption. Inventory management, crafting, and shopping are borderline torture. This is because there’s no on-screen icon to show you what you’re choosing. This literally led to me having to count grid spaces and guess when items were highlighted. This actually resulted in my plunking down a fortune on items I didn’t want.

While I could take or leave the shoddy dialog (after all, the internet’s ongoing love for Zero Wing is a testament to how amusing gaffes like that can be), the U.I. problems desperately need to be addressed by the developer. They barely function in their current state and make the game feel unfinished.

And that’s a crying shame. Because when everything is working as it should, Within The Blade can be an absolute riot. Sneaking up and quietly assassinating guard after guard feels incredibly gratifying. Oh, and let’s not forget the boss battles. With their gorgeous sprite work and frantic attack patterns, they’re the perfect payoff for completing each chapter and easily a high point of the experience.

No, it’s not perfect. With its clumsy dialog, touchy controls, and occasionally broken U.I., Within The Blade sometimes feels like a game that’s designed to work against the player. However, if you can overlook its faults, there’s an exciting and surprisingly deep experience beneath its many bumps and bruises. You just have to be willing to sift through the grime to uncover its finer parts. As for whether or not it’s worth doing so, that’s for you to decide.

A patch or two could go a long way towards addressing many of these problems. And if Ametist Studio can do so, Within The Blade could be a must-play title for ninja action fans who cut their teeth on Ninja Gaiden, Shinobi, and other classics of the 80s. Sadly, at least in its current state, this one’s hard to recommend.