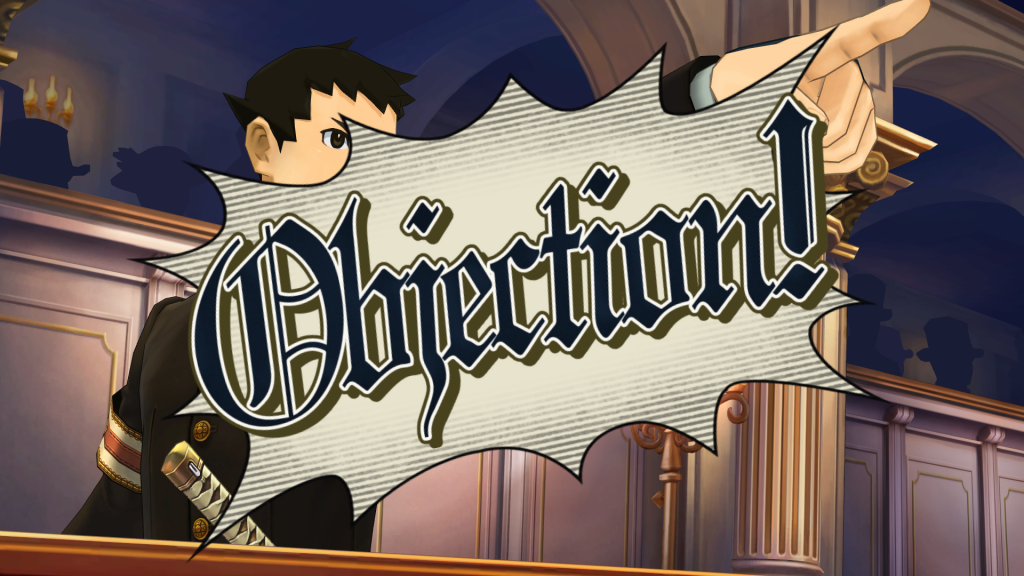 Both games follow Phoenix Wright’s ancestor Ryunosuke Naruhodo; like his progeny, Naruhodo fumbles his way through his court cases, sweating bullets, pointing fingers, and grasping at straws until he’s able to prove his clients’ innocence. Unlike his 21st century compatriots, Naruhodo stumbled his way into a burgeoning legal system in a rapidly modernizing Japan, eventually making it his goal in life to learn everything he can from the more established Western courtrooms in London. Naruhodo may have a heavy burden on his shoulders, but he doesn’t have to go it alone — with a colorful cast of characters to assist him every step of the way, Japan’s loyal lawyer son shines brightly in this foreign land. 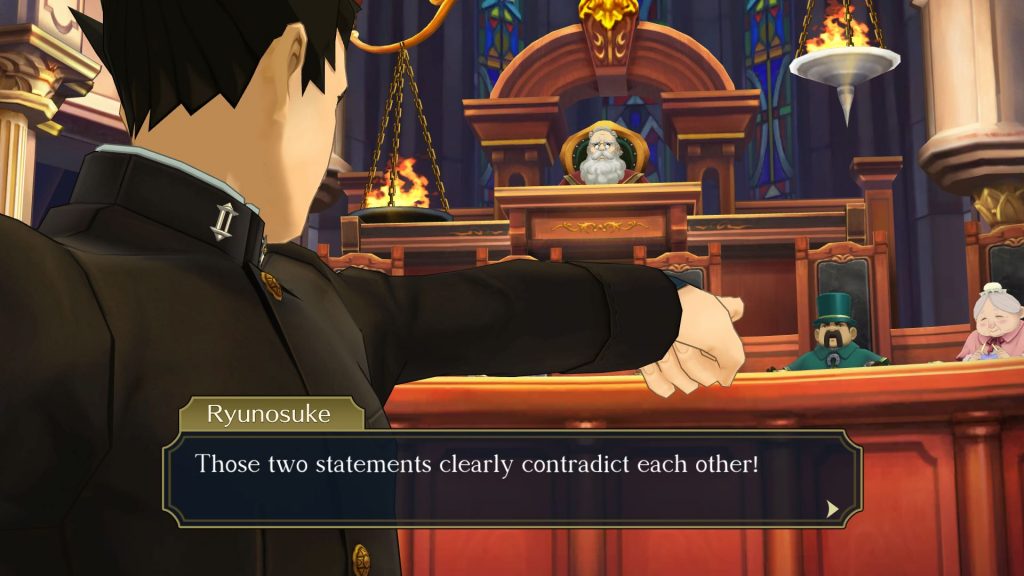 Having devoured every Ace Attorney game published in the West to date, I was initially concerned about the mechanics and graphics feeling slightly dated in comparison to the most recently released mainline title (as of 2016), Phoenix Wright: Ace Attorney — Sprit of Justice. That concern was for naught, however, as everything looked and felt great. The graphics themselves are actually more 3D than Spirit of Justice and have further distanced themselves from the original more traditional (and flatter) 2D anime designs of the GBA, DS, and 3DS titles. Coupled with looping character animations chock full of vivacious personality, The Great Ace Attorney Chronicles are a welcome sight to behold after years and years of waiting.

When it comes to mechanics, The Great Ace Attorney Chronicles does offer something new, but also recycles something old that still works. Like the delightful Professor Layton vs. Phoenix Wright: Ace Attorney game for the 3DS, Naruhodo will often need to cross-examine multiple witnesses at the same time. Unlike anything seen in previous releases, The Great Ace Attorney Chronicles introduces both the Jury mechanic, which acts as a pulse-keeping tab on trials which the player must carefully balance, and the “Dance of Deduction” mechanic, wherein Naruhodo and the so-called great Herlock Sholmes deduce, then re-deduce, answers to burning questions asked during the investigative sequences. 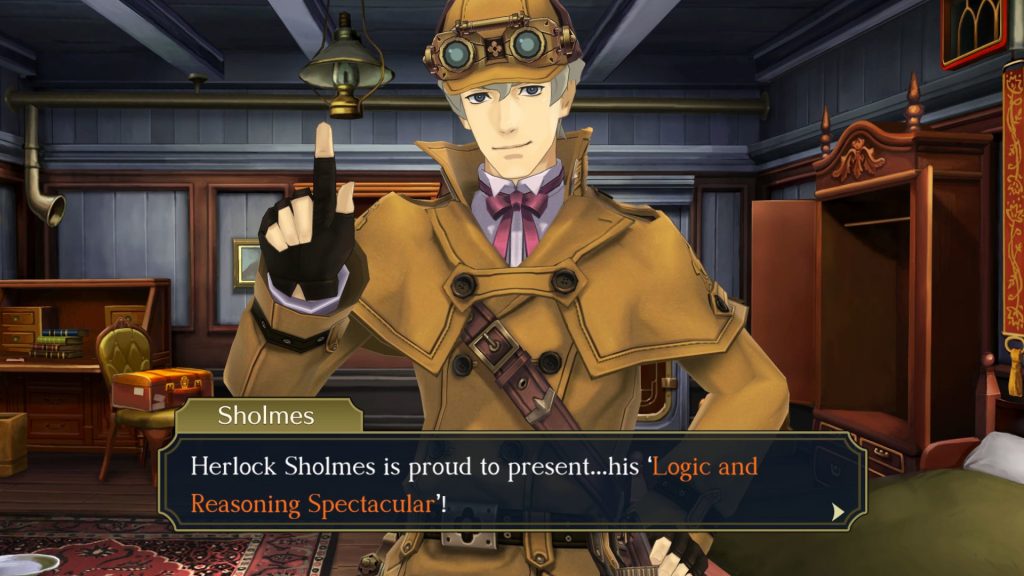 Considering the source material, the Dance of Deduction makes perfect sense — while Sherlock Holmes may arguably be the smartest European detective (sorry, Hercule Poirot), Herlock Sholmes is… well, not. Quickly jumping to conclusions with a strange sort of polite arrogance that the other characters dangerously take as truth, Sholmes is more likely to get Naruhodo in trouble than out of it (or in the very least, lead everyone astray). During his self-aggrandized infamous deduction sequences, he confidently arrives at conclusions that could make sense at face value, but a closer look shows the cracks in his “Logic and Reasoning Spectacular.” It’ll be up to Naruhodo to course-correct the enthusiastic yet wayward detective by pinpointing incorrect key phrases and determining the right one by investigating the scene at hand.

The Jury mechanic, by contrast, is less a dance and more a carefully controlled disaster that only the likes of Naruhodo could wriggle his way out of. Over the course of the trial, the six jurors will capriciously waffle between innocent and guilty verdicts; when all of them have decided that it’s the slammer for the client, Naruhodo can then pit the jurors against each other by finding inconsistencies in their logic. By pointing out the flaw in one juror’s reasoning with the statement of another, Naruhodo is able to cling to the case just a little bit longer through clenched teeth and nails bitten down to the nub. It’s the first time the jury has really played a part in any of the Ace Attorney cases, and it feels less like a diverging mechanic and more like a missing puzzle piece — it fits perfectly! 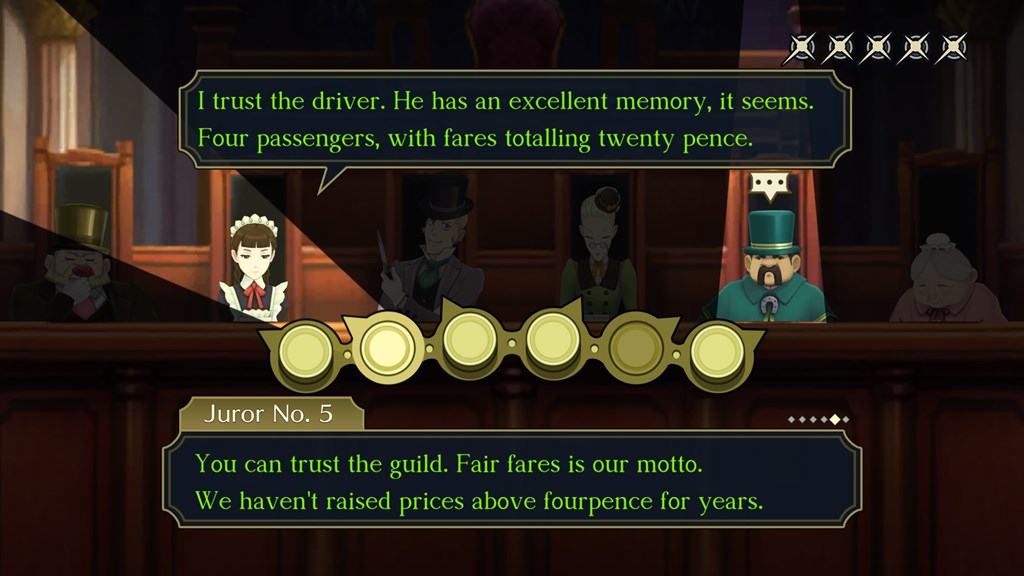 As for the cases and investigations themselves, the Ace Attorney franchise proves yet again it’s a top-tier visual novel experience. We’ve come a long, long way since the very first Ace Attorney game, and comparing that game’s first case to The Great Ace Attorney Chronicles’ first case shows massive differences in design while keeping key elements in their place. For example, the very first case is a twisty, turny, exciting yet cumbersome affair that felt more on par with the writing of an earlier title’s second or third trial. Now, granted, it was a good case — very good, in fact — but due to the great lengths the dev team went to in an effort to seemingly re-introduce the franchise by way of new characters and settings, I fear new players will get more out of this series than returning ones.

The reason why I suggest this is partially due to the way in which the cases are set up. Past Ace Attorney titles have players dive right into the first case starting from a tutorialized trial with a variation of Max Payne as the prosecutor, followed by an investigation and trial for the remaining cases against the game’s true “antagonist.” Playing The Great Ace Attorney Chronicles chronologically, the first case is trial only, the second case is investigation only, the third case acts as a Jury mechanic tutorial, and the fourth one finally allows players to build some momentum to carry them through the remaining six cases. It’s a bit of a slog at first for returning players — especially with very repetitive dialog reminding them how to play — but for new players, I wonder if this extended tutorial will serve them well. 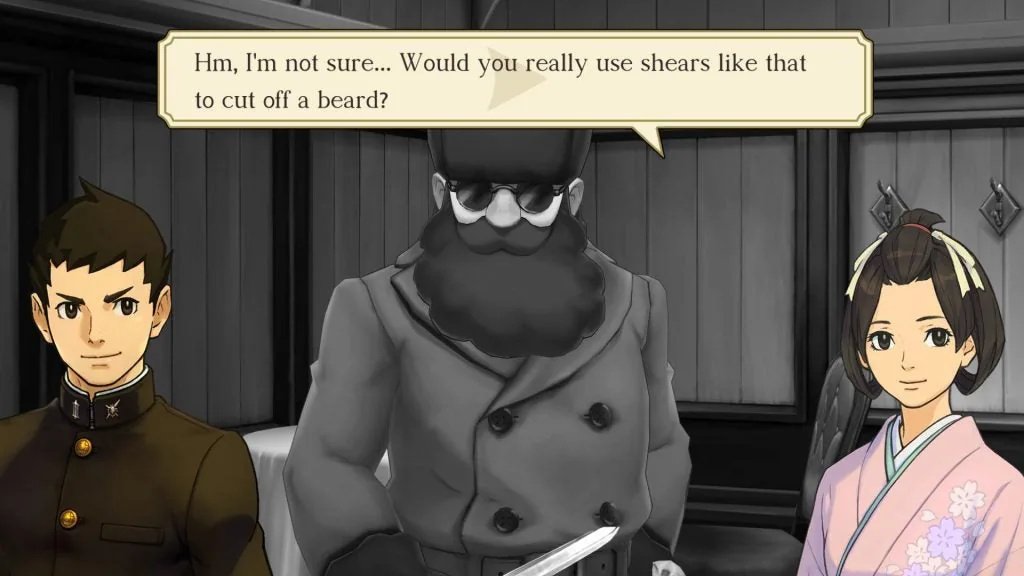 On the one hand, it can be argued that more writing means more hours of gameplay, which means more bang for a player’s buck; on the other hand, the dialog, while filled with amazing puns as per usual (and one writing joke that literally left me laughing so hard I had to put down my Switch), feels pretty dumbed-down in comparison to the older titles. There are times where you know the answer and can see what is a false lead, but every single character in the room wants to give what feels like a dissertation on said false lead before they bury it. This can certainly add to personality of course — I feel like I got to know Kazuma much better than I became acquainted with Mia in her lifetime — but after waiting for these titles to release for half a decade, I was hoping to jump right into things instead of the absolute grind the first few cases provided. The second game isn’t like this at all, but the first one sure does feel like a slog.

Additionally, I have to mention how much I couldn’t shake the feeling of an inferiority complex on Japan’s part. It stands to reason that the developers chose this particular place in time specifically because of Sherlock Holmes Herlock Sholmes and built the entire premise around him: if using Sholmes, they’d have to place the game in Victorian England, which means Meiji Era Japan. A time of industrialization for the West and rapid modernization in the East, Naruhodo and company consistently imparted how much they had to learn from London. Which, you know, is fine — it happened. But to constantly talk about it possibly betrayed more of an inferiority complex than they may have intended; additionally, several English characters have no qualms in letting the Japanese people know they’re barely even human, and the responses range from failing to address the indignation to utterly disgracing themselves by offering boot-licking agreements (looking at you, Auchi). I’m not saying it needs to be dialed back on principle per se — after all, history is history — but there comes a point where you’re beating a dead horse. If anything, I just felt kind of uncomfortable. 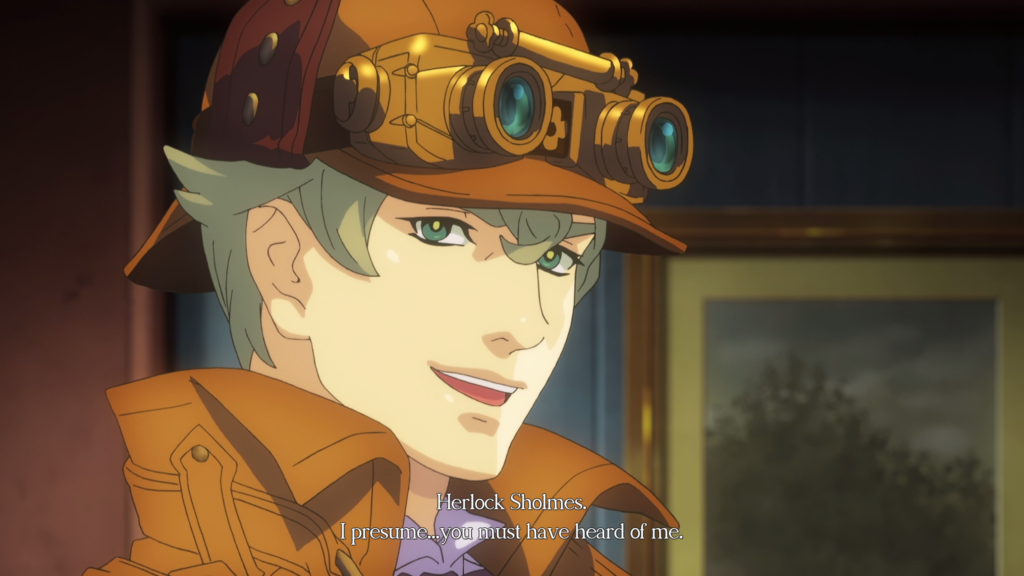 Those issues aside, The Great Ace Attorney Chronicles is still a solid title for all players that feels best suited for new fans in terms of how tutorialized the first few cases end up becoming, with a catch — said cases are emotionally difficult to get through. Not because they’re tear-jerkers or anything, but because (MINOR SPOILERS) Naruhodo himself is the suspected guilty party for both of them. For newcomers, I question if it will be a big emotional ask to be the suspect back-to-back, but for returning players, this shouldn’t be an issue; instead, it recognizes loyal fans would appreciate higher stakes, and the stakes are pretty darn high right out of the gate. And with such likeable characters in Naruhodo, Kazuma, and Susato (jury’s still out on Sholmes for me), the sense of urgency to clear Naruhodo’s good name is easily and enthusiastically adopted (MINOR SPOILERS END).

Obviously, this is an Ace Attorney game, meaning its pros dramatically outweigh its aforementioned cons. The Great Ace Attorney Chronicles does offer quite a bit of extra quality of life updates that plenty of the older titles were lacking; for example, there’s an autoplay mode that not only scrolls through the text for players, but even chooses the correct answer or piece of evidence when prompted. For some, this can mean avoiding looking up a walkthrough and instead just moving on when it comes to roadblocks. There are also in-game achievements on the Switch version, which is nice since the platform does not support them. Complete with some fun alternative costumes for several characters to wear and plenty of other bonus content for just $40, The Great Ace Attorney Chronicles is honestly an unheard of bargain.

Editor’s note: This review is based on a retail copy of The Great Ace Attorney Chronicles provided by the publisher. 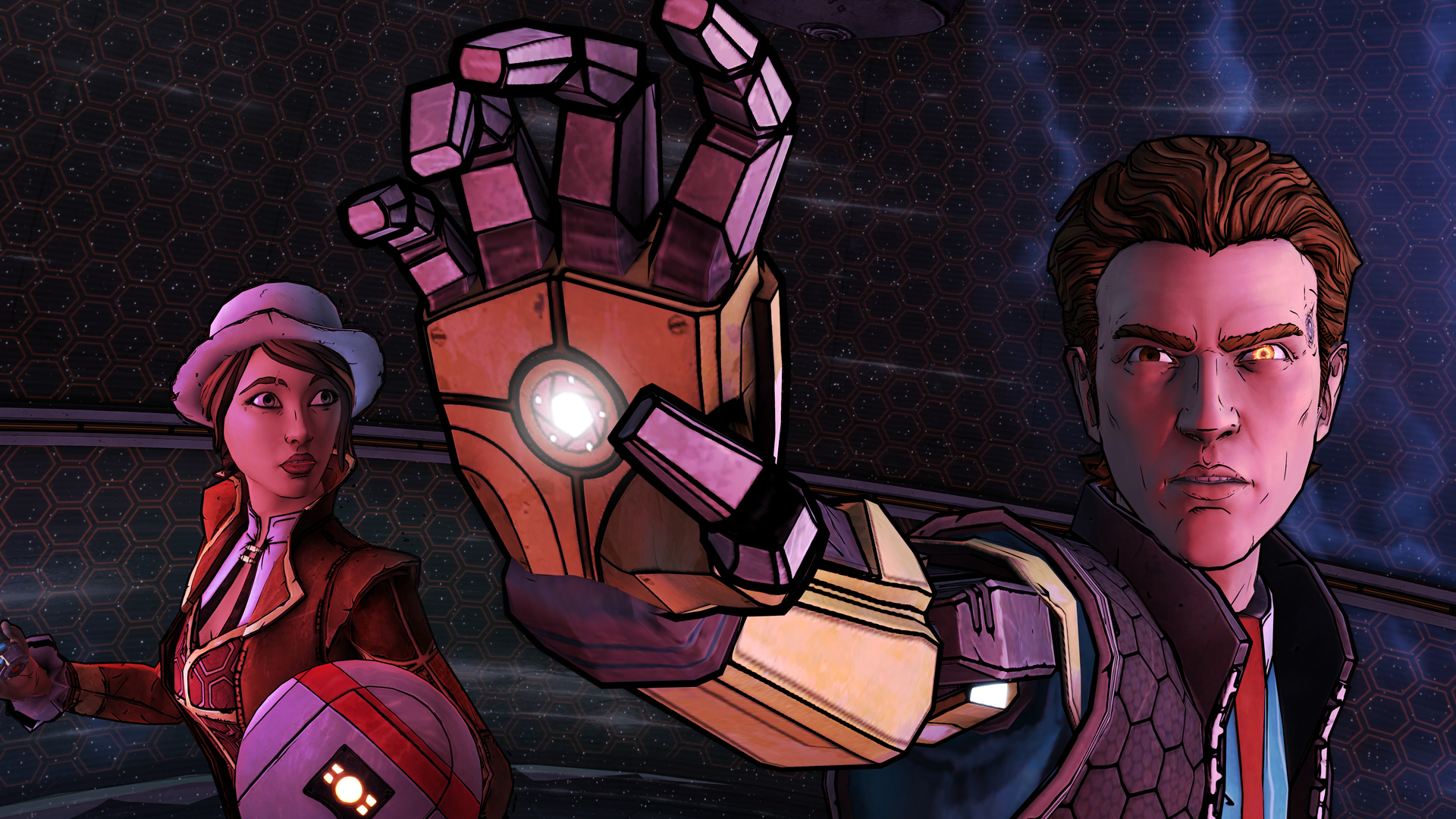 Tales from the Borderlands Episode 3: Catch A Ride Review (PC)

Telltale’s Latest Chapter Delivers a Pedal to the Metal Narrative Adventure Tales from The Borderlands Episode 3: Catch A Ride continues to carry the fever pitch momentum that propelled…