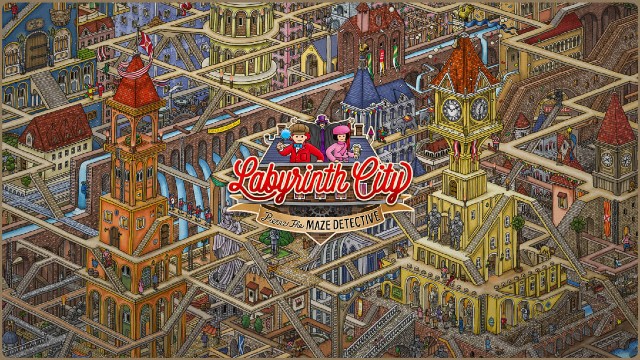 I need to start my review by stating that I’m not intimately familiar with Pierre’s literary adventures. In fact, what I know about the series I learned from the Internet. I just happened to see a trailer for the game and the art style immediately drew me in. Labyrinth City: Pierre the Maze Detective is adapted from the children’s book, Pierre the Maze Detective: The Search for the Stolen Maze Stone. Pierre’s apparently been solving mazes since 2015. Who knew?

Labyrinth City: Pierre the Maze Detective begins with the nefarious Mr. X stealing the Maze Stone. This ancient relic can somehow create mazes out of chaos. What that really means is that inanimate objects come to life and all sorts of nonsensical shenanigans conspire together to hinder you every step of the way. Also, people will just stand in your way because they’re rude like that.

In both book and game forms, the goal of Pierre’s journey is to make your way through a convoluted maze while looking for specific objects and people. It’s kind of like a mashup between a maze book, Where’s Waldo, and those I Spy books everyone read (looked at?) in elementary school.

Fans of Pierre will feel right at home because the game is a stunning interpretation of the source material. Many of the book’s pages have been, as far as I can tell, accurately reproduced 1:1. I say that with a grain of uncertainty because, as you can tell in the screenshots, Pierre’s world is vibrant, alive, and bursting at the seams with details. I compared the book’s pages to the game’s scenes as I played, though, and I didn’t see any glaring deviations. 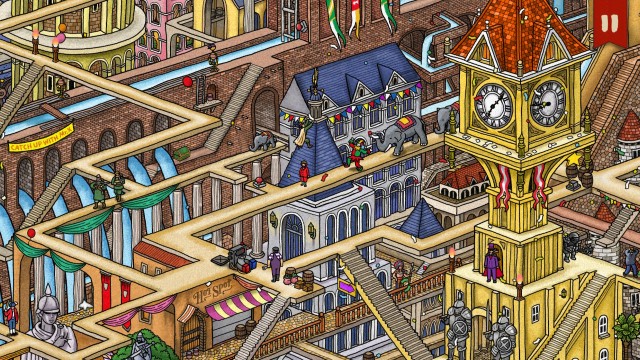 As a game, Labyrinth City is a translation of the book’s experience. You guide Pierre through a variety of chaotic and intricate mazes. A helpful person at the start of each maze will give you a hint and point you in the proper direction. From there, it’s up to you to find your way to other people who will ultimately guide you to Mr. X. He’s always hanging around somewhere taunting you, like most supervillains.

Labyrinth City is infinitely accessible. You guide Pierre with the joystick, interact with the world with the A button, and the Y button zooms the camera back a bit. That’s it. The control scheme is so simple that the game doesn’t even bother to introduce it. There are no time limits, and it’s impossible to fail. It’s a relaxed sightseeing experience set in a world of mazes.

As previously mentioned, the Maze Stone creates mazes by using whatever is in the area. This means that stone soldiers and museum exhibits come to life. Animals can speak. Traffic jams occur out of thin air. The Maze Stone, true to its name, also creates a variety of pathways that loop on each other and quite often lead nowhere.

The Maze is Alive 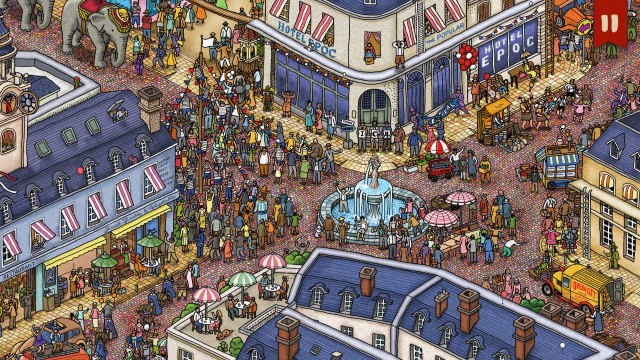 Labyrinth City’s mazes aren’t that difficult, although, they look impressive, especially from a distance. A key part of the experience is wandering through the land, talking to everyone, and interacting with a variety of objects that behave in unexpected ways. I opened a car door, a ton of balloons flew out, and the car floated away like the house in Up. A clocktower blasted off like a rocket. There are surprises around every corner, and it’s hard not to smile at the sheer ridiculousness of it all.

While your goal is always to reach the maze’s end (and Mr. X), there are a few additional objectives to keep you busy. Each maze has three stars, four treasure chests, and four pages from Mr. X’s notebook hidden in it. Each maze also has a simple mini game that rewards you with a shiny golden trophy. A few examples include straightening paintings that don’t want to be straightened, rescuing birds from bubbles, and feeding a hungry gorilla with flying bananas. None of them are challenging, but they do provide a brief respite from all the walking. 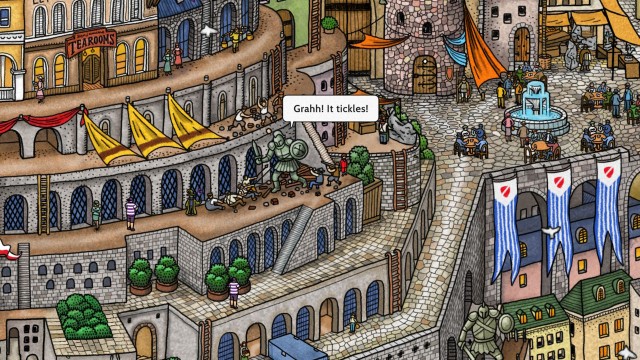 Labyrinth City’s presentation is beyond reproach. The game perfectly captures the look and feel of the source material. It’s beautifully drawn and animated, and I spent an inordinate amount of time just looking. It’s a testament to the designers that they were able to achieve it. It really is like playing one of the books. I do wish there were a way to view the entire maze after you complete it, though. It would have made it too easy if you could view it from the beginning, but what’s the harm at the end?

The game’s narrative is also told comic book–style after each maze. Each scene has a little animation, and an enthusiastic narrator reads to you while you view it. She also uses unique voices for each character. It’s like a parent is reading to a child; it’s a heartwarming touch that perfectly complements the experience.

Labyrinth City’s dialogue is surprisingly witty. There’s also a lot more than I had expected. A few recurring characters also join you for each maze. There’s a ninja hunting stars who focuses too much on his training. An adventure-seeking polar bear finds himself in some exciting circumstances. The mailman reads your mail for a variety of reasons, but he has the best of intentions. 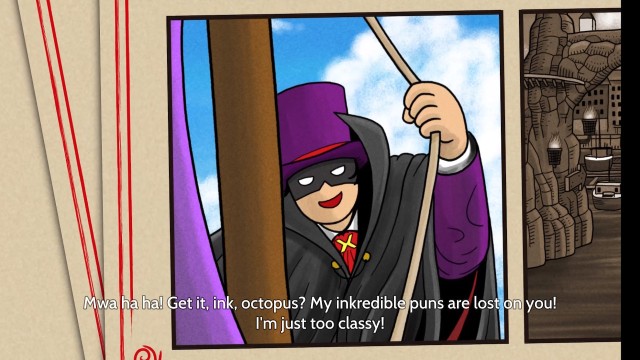 Each maze also contains a few characters who are a bit too self-aware. A grim reaper in the haunted mansion maze says he “wasn’t told it was fancy dress.” A horrible box monster yells insults such as “YOU ARE ALL GROSS!” This doesn’t even include all the pop culture references. There’s a merchant selling dogecoin and a certain famous soldier who likes to hide under boxes. You never quite know what to expect, and there are plenty of surprises.

Labyrinth City’s soundtrack is also outstanding. A lively mix of jazz and folk, it’s the perfect auditory complement to the game’s laidback style. It also becomes livelier every time you locate the next person or Mr. X. It eventually crescendos at the maze’s last stretch, and it provides a lively segue into the game’s narrated scenes.

The Solution is Walking 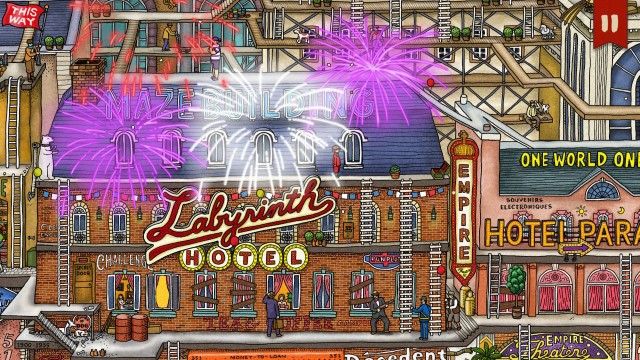 The game’s book origins, as captivating as they are, also limit the gameplay. Unfortunately, there’s little interactivity. Most of the wacky animations that you trigger don’t serve a purpose. This means that Pierre’s adventure is more passive than I would have liked. There’s plenty to see but little to do. The collectibles lengthen the journey and encourage exploration, but all you ever have to do is find them. Most of your time spent with the game is walking and watching.

There are a few obstacles that do help to spice up the gameplay. Mr. X, as a villain, has minions, and these minions create one-way passages. You can pass by them if you approach from behind, but they’ll point you away and mutter an annoyed “No!” if you approach from the front. There are robots on tracks that do the same thing, and talking couples who block perpendicular paths when approached. There’s also a guy with a magnet who gets stuck to his own machine when you step on a nearby switch. It’s the only way to temporarily move him. Much like the rest of the game, though, you solve these issues by walking. It’s simply a matter of approaching the obstacle in the proper direction. 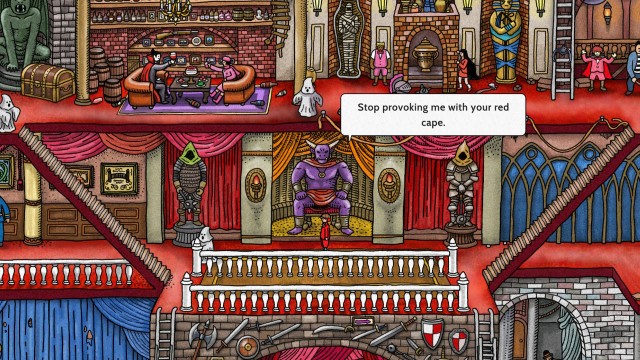 The reason I’m disappointed in the game’s focus on walking is because of the sheer magnitude of each maze. There are literally hundreds of little events that occur, and any of those events could have been the catalyst for deeper gameplay. In the balloon-car example, it could have been used as a platform or something after it floated away. The elements were already in place; the designers just needed to give some of them a purpose.

This wouldn’t have made the game difficult either. There’s only one solution to each maze, and in every maze, there’s a character that will spawn arrows to help guide you to it. I understand the desire to perfectly emulate the books and to craft the game to the book’s younger audience; however, the designers have crafted a world that’s so beautiful and charming that it’s hard not to want to interact with it more.

Labyrinth City has ten mazes, and I spent about an hour in each of them. You can return to previous levels to look for any collectibles you missed, but there’s little reason to return to a maze after you’ve fully completed it. The same is true of the game; after you’ve bested these mazes, you’re done. I had hoped that finding all the collectibles might have resulted in another maze, but that doesn’t seem to be the case.

Lost in a Lovely Labyrinth

Labyrinth City: Pierre the Maze Detective is a wholesome, whimsical stroll through a lively and beautiful world of mazes. Its relaxed gameplay might not appeal to everyone, but it’s so charming that it’s difficult not to recommend it. As a final observation, this game made me smile so much that I had to briefly ponder my legendarily sardonic nature. There’s something to be said for an experience that creates such happiness.