Lots of Rampage Energy in Gigapocalypse 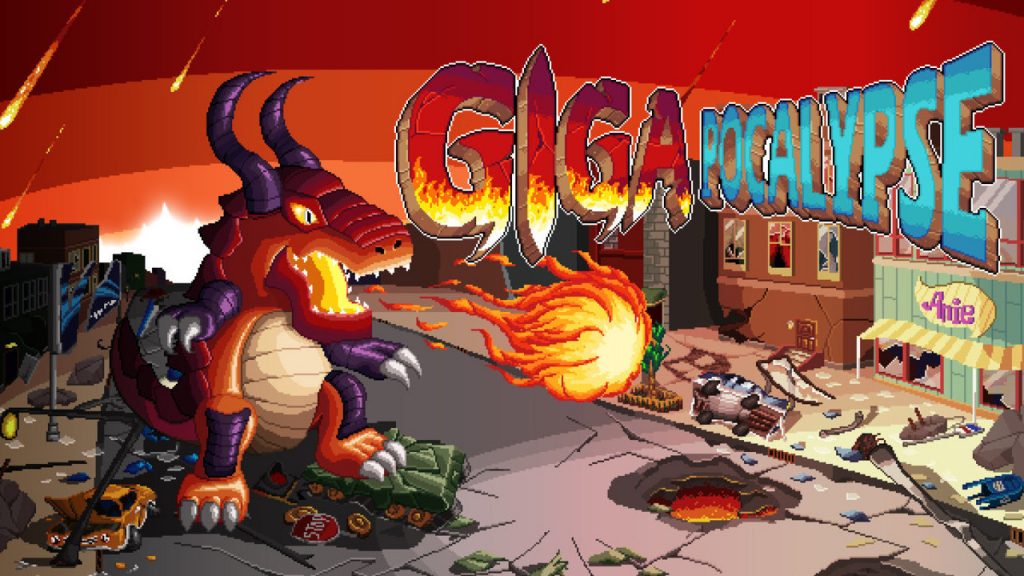 As one of those ancient gamers that grew up in the 80s, I’m rather fond of arcades. Back in the day, those were the way to play games. They were flashy, bombastic quarter-eating monsters, and they were delightful. One of my favorites was Rampage. I loved playing as giant monsters, climbing buildings, punching tanks and eating civilians. So when I saw how similar Gigapocalypse looked to that arcade game, I knew I wanted to try it out. 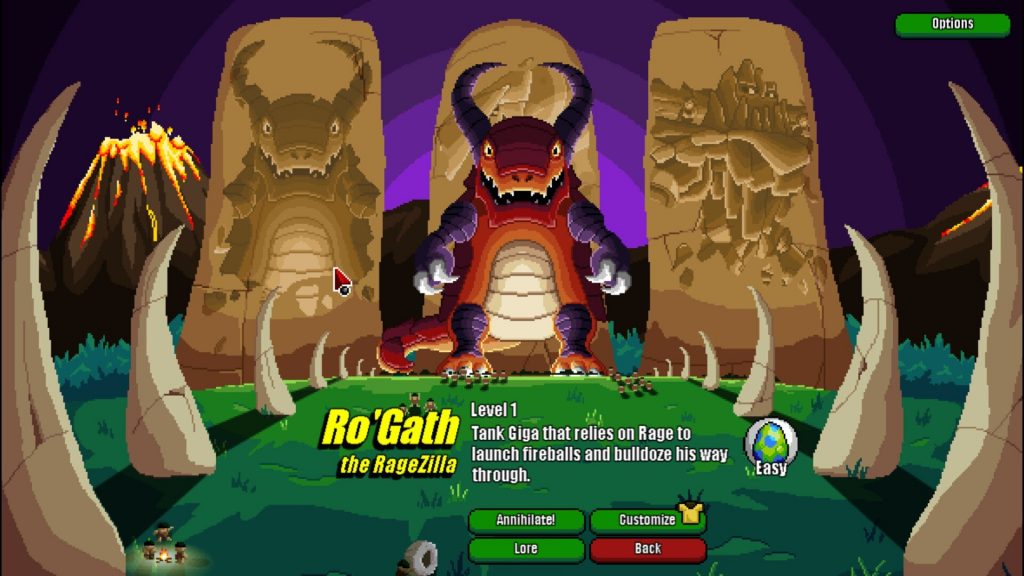 Developed by Goody Gameworks and published by Headup Games, it’s a mashup of Rampage, Tamagotchi and more. It’s currently in Early Access, with a handful of playable Gigas (the game’s version of kaiju). There’s 3 in the current build, but I only tried two so far – Ro’Gath and Azurath. Ro is a red T-rex looking fellow, and he is a literal rage monster. He claws buildings and fires electrical jolts. Azurath, by contrast, is a serpentine female Giga. She uses ice powers and summons minions to do her bidding. Though I spent more time playing as Ro, I really preferred how Azurath played. Her powerful ranged icicle attack is practically a spreadshot when powered up, and her mirrors would automatically laser foes in their path. Though I haven’t played the third Giga yet, he’s a rocky monster that looks like fun. 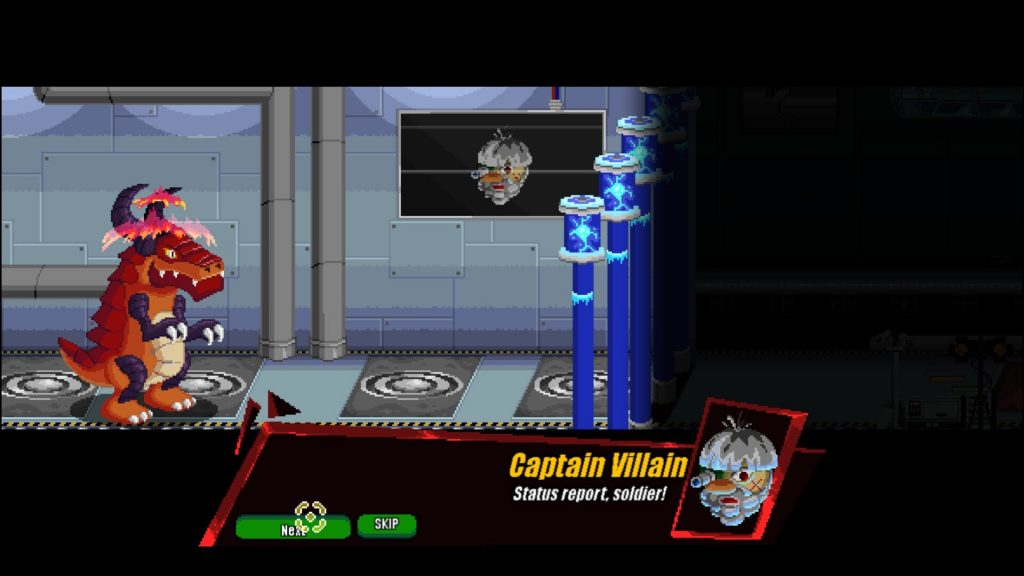 The game starts with your Giga of choice escaping from the lair of a mad scientist. Here you’ll learn the basics of the controls. Unlike Rampage, in Gigapocalypse your Giga is constantly moving forwards. You can’t scale buildings or smash windows. Instead, you aim a reticule, and it controls where your ranged weapons hit. You can also use physical attacks with some Gigas, though I found those far less useful. The key gimmick is each Giga has a meter that determines whether or not they can attack. Once it’s empty, they are stuck standing still, where they quickly become bullet sponges for angry humans. Your job is to balance attacking with acquiring more energy to keep going. For Ro, that energy is called Rage. For Azurath, it’s concentrated icy globes of power. Additionally, getting hit powers up your energy a wee bit, but it’s best not to rely overmuch on that, since you only have so much health. 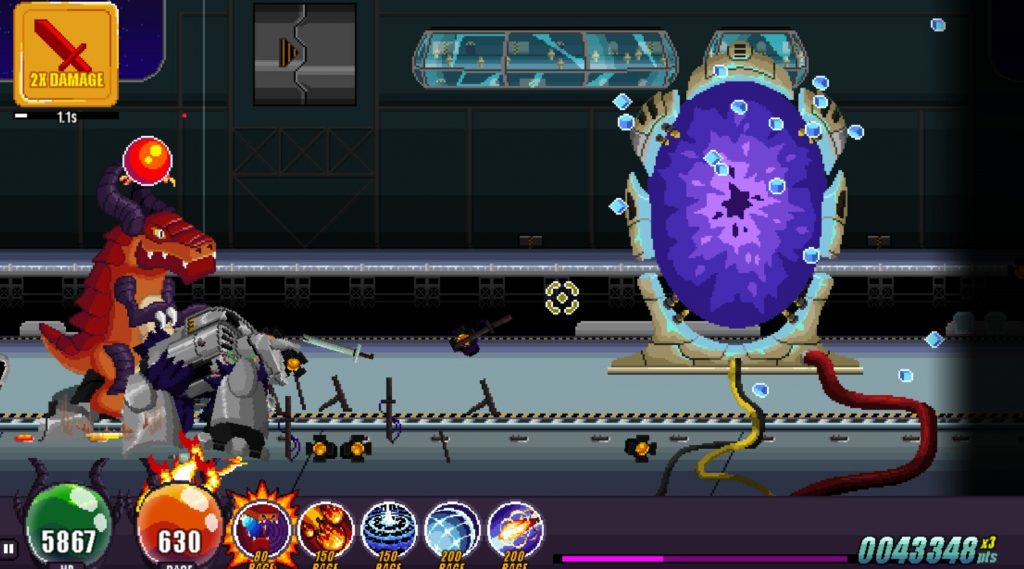 You’ll also eventually get access to super attacks. Ro inhales nearby humans, increasing his health. Meanwhile Azurath summons minions made out of ice to patrol the streets. I loved these once I had them, but just wish the game had told me which button was used to activate them. But I’ll talk more about the specific control issues later in this piece. Once you get through the demo stage, your Giga jumps through a portal into space and time, becoming depowered to an infant in the process. Your job in the game is to smash through stages, level up, get new pets and acquire mutation points. When you aren’t destroying all in your path, you can feed, pet and clean up after your baby Giga (no, I’m not joking). 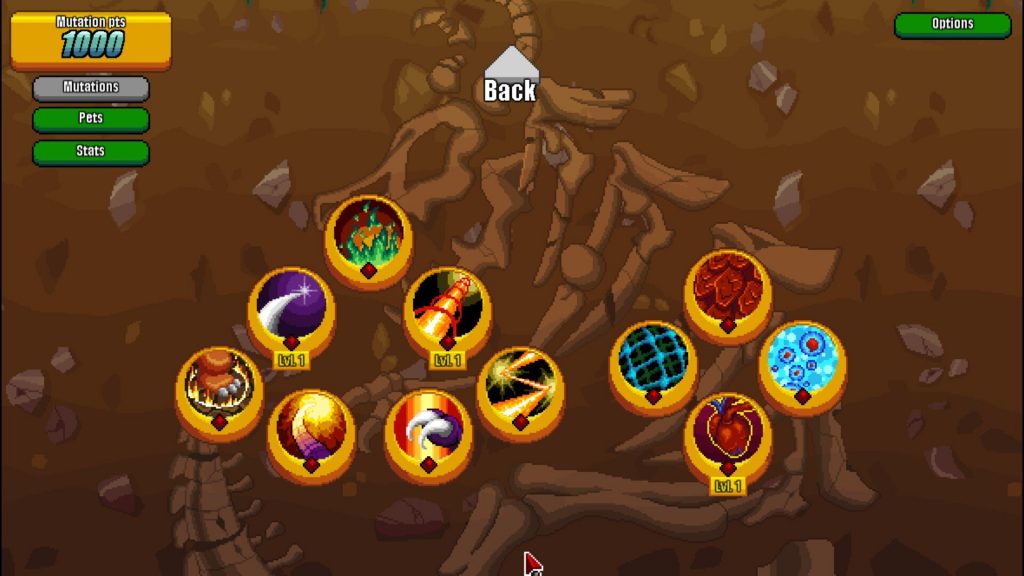 The real meat of the game is how you customize your monster. There’s a huge skill tree, full of neat abilities you can power up. Most are automatically activated, such as how Ro can learn to stomp the ground and create shockwaves. But others boost your main or secondary attacks, such as making Ro’s lightning branch into other foes. What surprised me most was how grindy the game can be. You start out really weak, and slowly work your way up by gaining levels and mutation points. You get these even if you fail a stage, and you’ll fail a lot at first. Once you get powerful enough, you’ll make it to the stage boss, and eventually unlock more levels. The first one is a mecha that challenges you with random math problems. By solving them, you’ll short circuit it, giving your Giga a chance to attack. 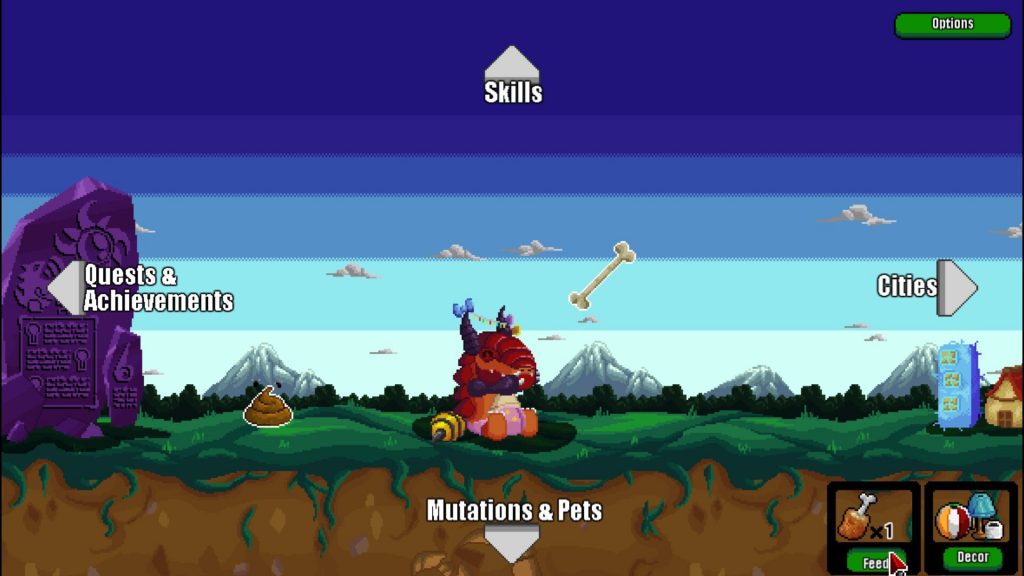 Who’s a good Giga? You are!

Since the game is so grindy, it’s good there’s several pets you can obtain. These are units that do helpful things, such as occasionally feeding your Giga to keep them healthy in battle. You can pay mutation points to unlock more slots to equip pets for battle, which really opens up the combat. When you add the super moves you can learn the game starts to get really dynamic, though never as frenetic as the arcade game it was based on. It’s much more strategic, in a weird way. 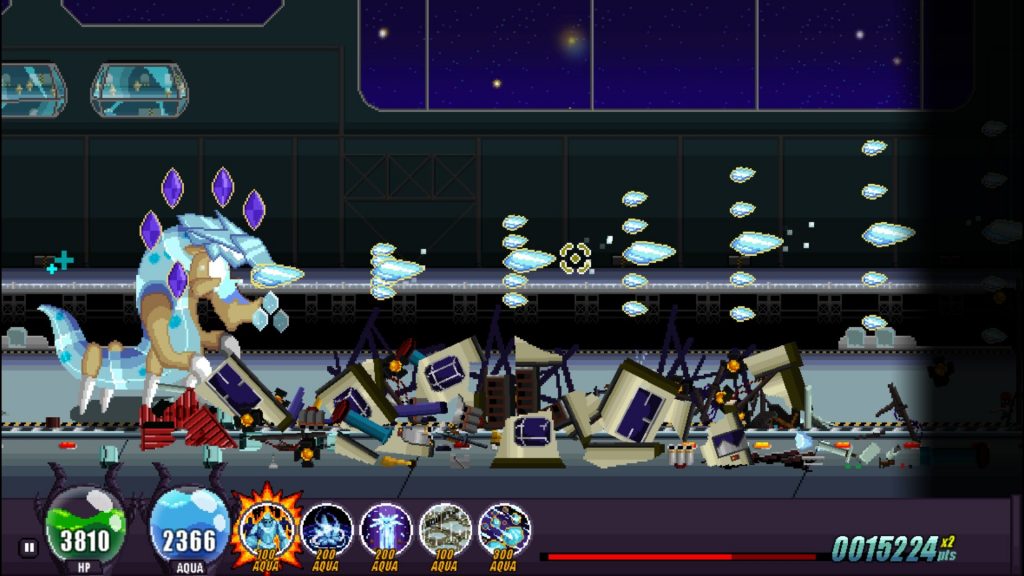 Besides all that, there’s also tons of achievements and quests to keep Gigapocalypse fresh. And I love all that, and find the game very ambitious. But there’s one thing I kept running into in this Early Access build that held it back – numerous glitches. And while I hate to harp on that sort of thing, I’m gonna mention them below in the hopes they get patched by Goody Gameworks ASAP. 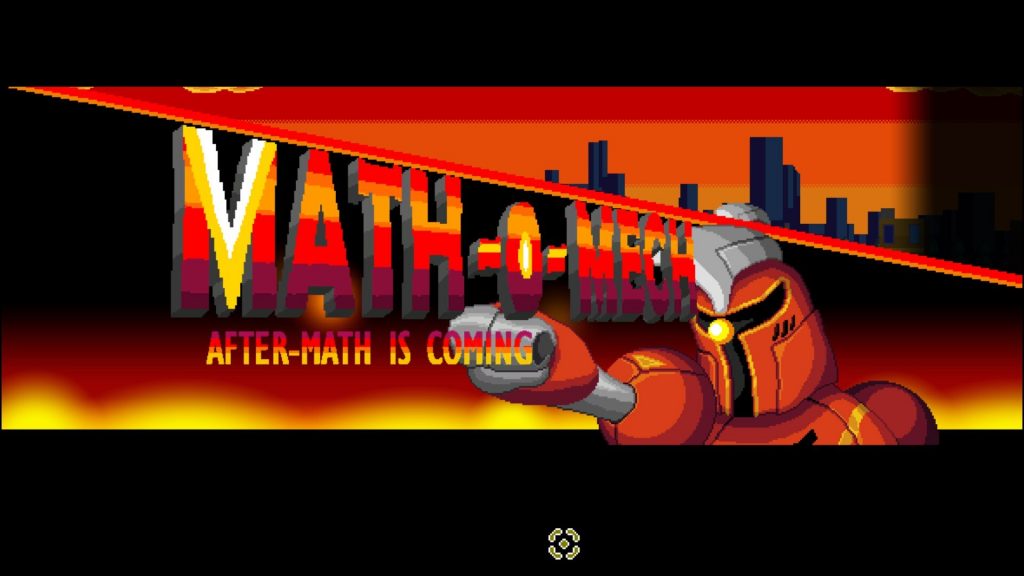 When I first started up Gigapocalypse, I had to manually select to use my gamepad. That’s fine in theory, but it gets worse. Once I quit and returned to the game later, my mouse didn’t work. I had to plug my gamepad back in just to get started. Also frustrating is even after I picked gamepad, the tutorial displayed controls for the keyboard and mouse. 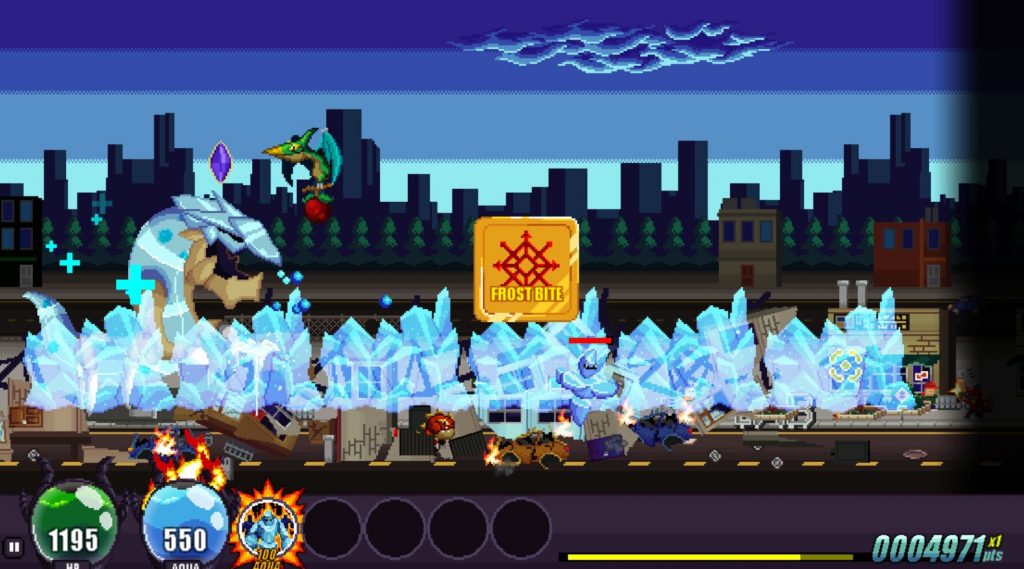 While I like how the game limits your attacks with various meters, it can be very easy to run out if you’re not careful. More difficult is that the controls aren’t very precise, with gamepad or keyboard and mouse. The reticule is very floaty, and it can be hard to tell if your attacks are connecting. If there were more distinct audio cues, this would be less of a problem. 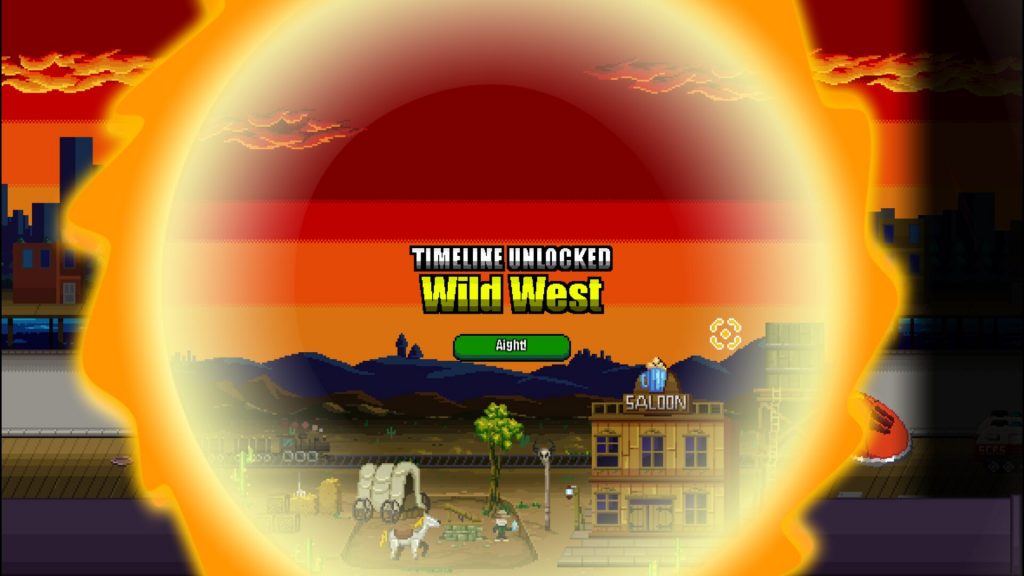 Problems aside, I think Gigapocalypse has a ton of potential. If Goody Gameworks can fix the problems I noted, and tighten everything up, it’ll be a fantastic adventure. Especially considering there’s 6 more Gigas coming to the game later on. I have hope this can be the successor to Rampage old fans like myself have wanted for years. Definitely a title to keep on your radar.