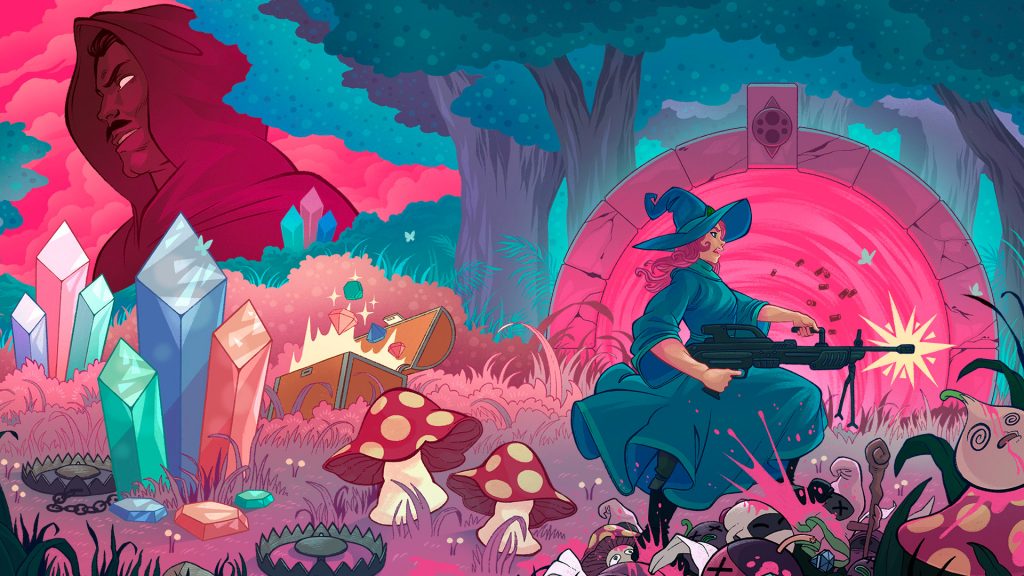 Let me be honest – I’ve been curious about Trigger Witch since Eastasiasoft first revealed it. See, I’m a fan of quirky concepts. So when I see a game about gun-toting witches, then it was almost a certainty I’d be writing this Trigger Witch review. Developed by Rainbite and published by Eastasiasoft, Trigger Witch is a game that had a lot of potential. Featuring colorful artwork, violent mayhem, and twin-stick action, I hoped it might be my next gaming addiction. And while I did enjoy my time with the game, it fell short of being the next twin-stick classic.

The Wonderful Kingdom of Ozryn 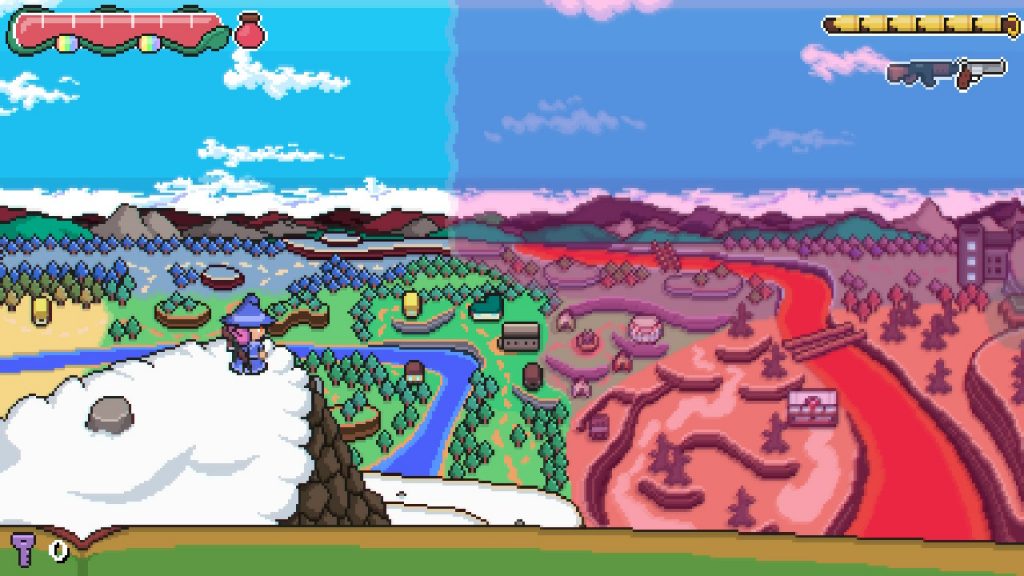 First, let’s talk about what Trigger Witch does right. The game plays out much like SNES Zelda if it was a twin-stick shooter. You run across the overworld, puzzle through dungeons, and conquer dangerous bosses. You play Colette, the next initiate of The Stock. She lives in Ozryn. It’s a fantastical world of witches and monsters. It’s suddenly thrown into chaos by the appearance of a magical portal that spits out guns. Dubbed the Ordnance Rift, it changed the life of all on Ozryn, most especially the witches. They focused on the sheer power of mechanized armament at the expense of their magical powers. Over the years, they’d all but forgotten their spellcraft, other than magicking more bullets for their guns. They also manage to seal off the realm of the neighboring goblins after the Rift appeared, with something called the Norsou Partition.

Nothing Safe Ever Comes Out Of Magical Portals 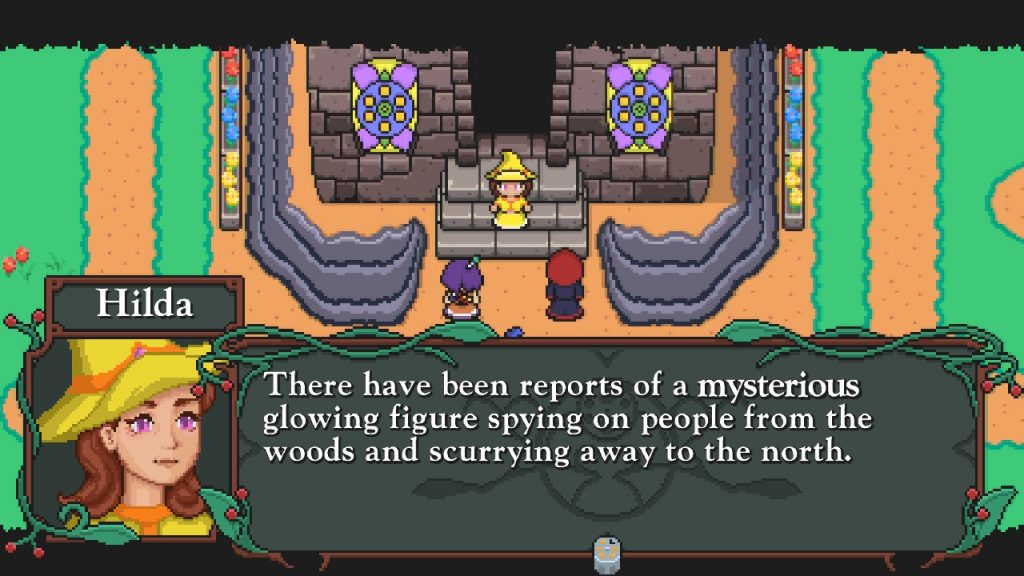 The game starts with Colette going through her trials to receive her first gun, and hopefully become a member of the Clip. She and friends Remi and Shelly (all with names that double as gun puns) try to get in, but only Colette manages the trial. Worse, the day of her test, something other than a gun comes flying out of the Ordnance Rift. This mysterious creature sets many plans in motion, and leads Colette down a strange and delightfully absurd rabbit hole. 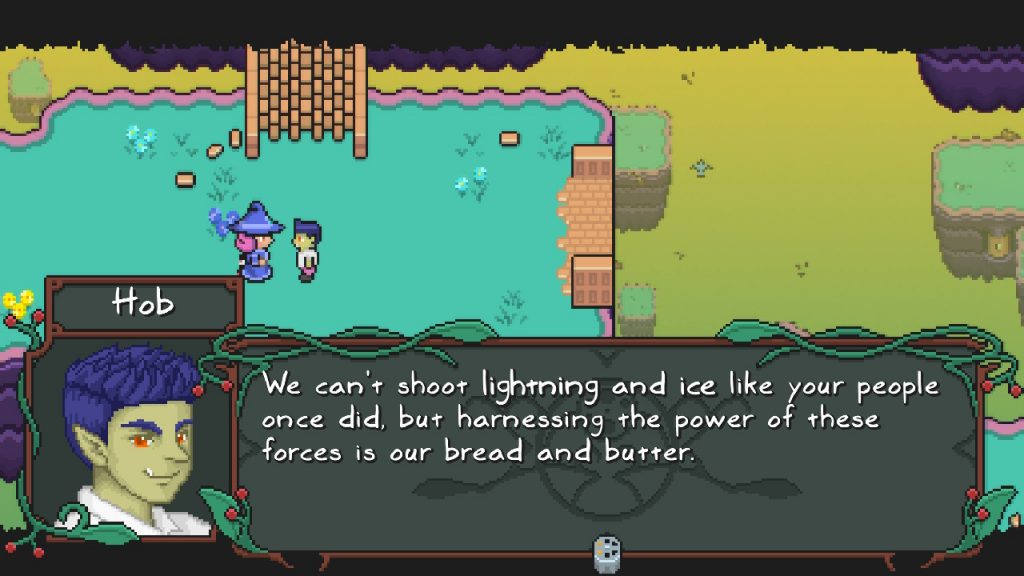 I mostly enjoyed the plot of Trigger Witch, especially the weird places it goes. It features characters with lots of spunk and personality. That said, I still wanted a bit more from the story, which ends just as things were getting interesting. You’ll get lots of dialogue with branching choices, letting you express Colette’s personality. Unfortunately, I’m pretty sure your choices don’t affect the ending you get. Which, while not surprising, was somewhat disappointing. 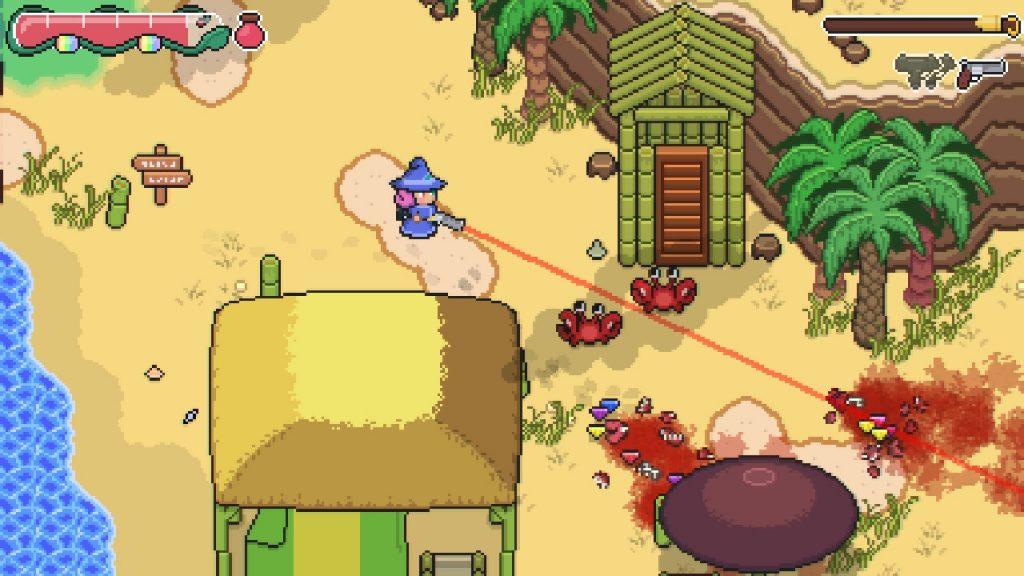 Ultimately, the plot and characters always come second in a twin-stick shooter. Those demand precise and tight controls, and I’m happy to say Trigger Witch generally delivers. It’s easy to aim and fire with your joystick and shoulder buttons. You have one primary weapon with endless ammo, only requiring you to reload on occasion. You’ll also come across 8 additional secondary weapons. Collette can have two equipped at a time, and can switch between them with a press of a button. The way they work differently is they don’t let you reload them manually. Instead, they reload over time. 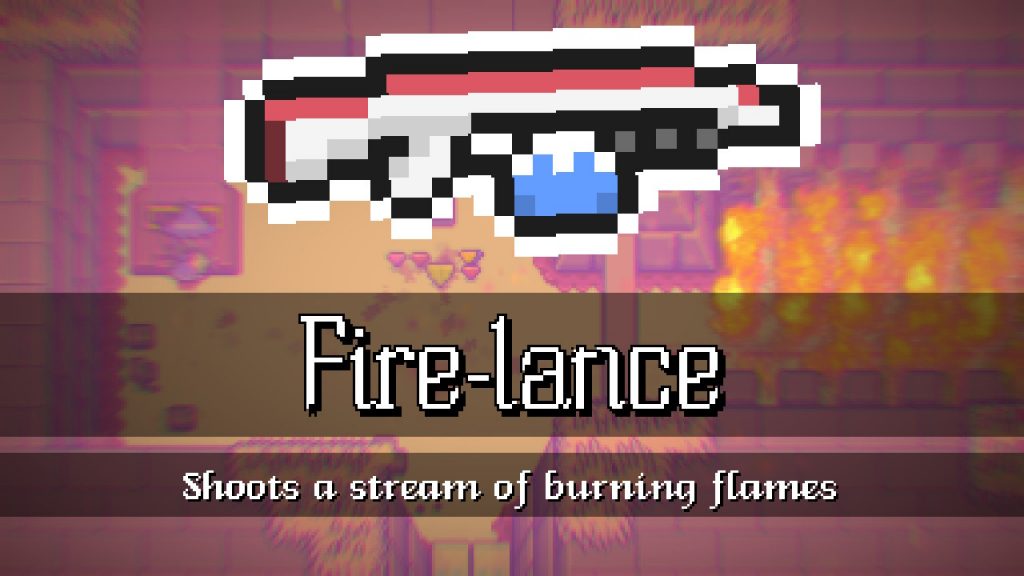 Say hello to my little friend. His name is Burny!

This forces you to strategically switch between weapons as you battle, and not rely overmuch on your powerful secondary weapons. They range from shotguns to dual uzis and even flamethrowers. I really didn’t mind this, and found the secondary reload time pretty generous. The other key mechanic is your vitality potion. As you blow monsters away, you’ll slowly fill it up. Once full, press X, and you’ll fully heal. Eventually, you’ll get a second potion as well, which really helps later as things ramp up a bit. Lastly, you can do a handy dodge to avoid damage and numerous traps like spikes and bear traps, though it has a slight cool down before you can reuse it. 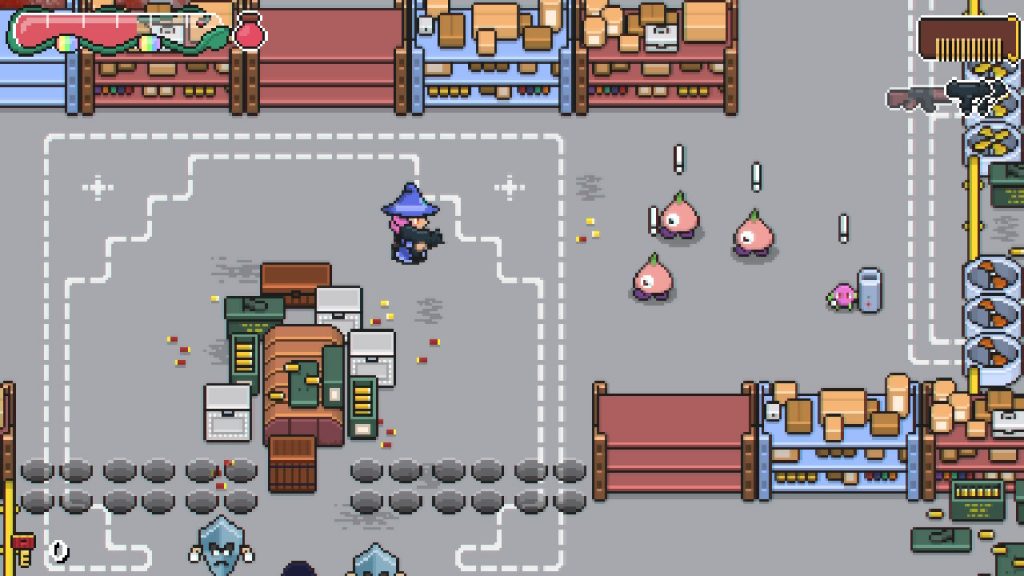 I enjoyed the combat in Trigger Witch, which is fast-paced and relentless. Once you’re seen or heard by a group of foes, they’ll all come charging at you. Some will also teleport in, forcing you to clear them out before you can exit a room. I only got totally overwhelmed a couple of times, such as when I was thrown into a goblin arena. I didn’t realize there that it was a “survive as long as you could” situation, and I panicked as the monsters just kept coming. There’s a decent variety of enemies, ranging from garlic monsters that charge to little priests that heal all enemies and even foes that snipe you. I liked the variety, but was a little annoyed by the color-swapped enemies you encounter in the second half of the game. I would have much preferred fewer foes so long as they were all distinct.

Puzzle Your Way To Victory 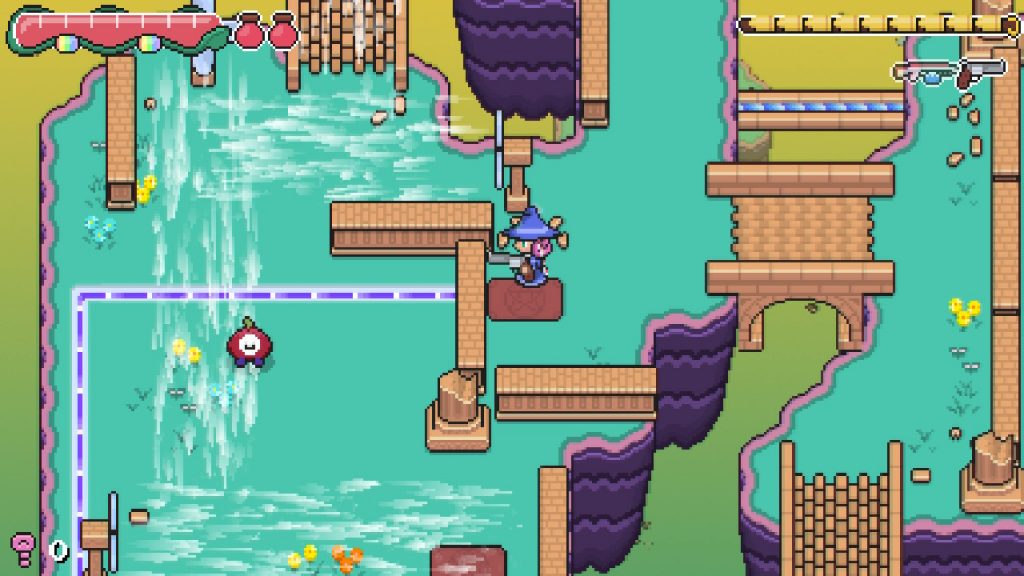 You’ll also have to do some light puzzle-solving in the game. Some of the guns have secondary uses, such as burning icy walls with the Fire Lance or exploding chains with a mortar launcher. I enjoyed these momentary detours and actually found I wanted more puzzle solving. Mostly cause the game reminded me stylistically of games like A Link to the Past. Those sorts of games did a great job of constantly forcing you to use new techniques and tools to progress. There’s some of that in Trigger Witch, but not very much. Most of the puzzle-solving is shooting switches or depressing panels to activate circuits. The only other way the game mixes things up is with a couple of notable Shmup segments with Colette flying on a broomstick. 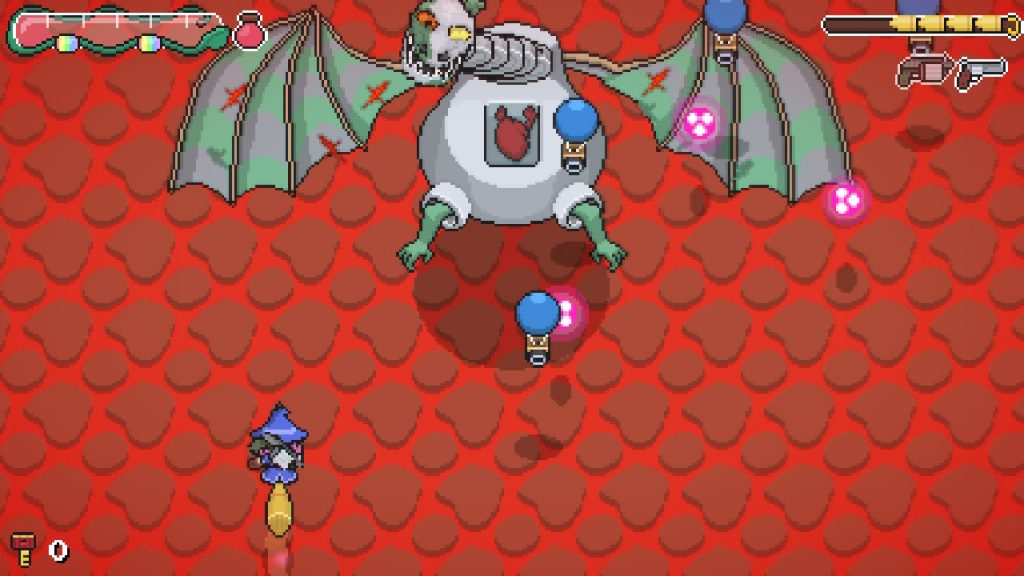 As you progress through the game, you’ll obtain story objectives you have to fulfill. The game conveniently marks points of interest on the map, which really helped me avoid getting lost too often. The one exception was in a dungeon called Old Nux Castle. It was full of ghosts and had limited sources of light. I wandered the entire castle repeatedly, unable to find one chest with a key I needed. After spending a good two hours longer than necessary, I finally stumbled upon it. The incident really made me wish the map listed chest locations.

Don’t Travel Without A Map 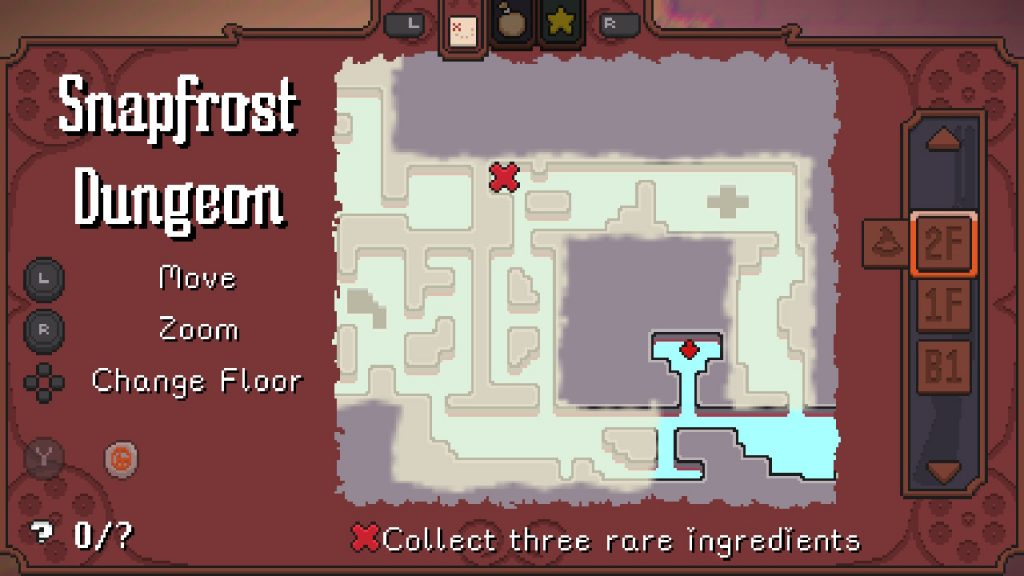 You’re allowed to wander as you play the game, and there’s a good amount of real estate to explore. You’ll mostly do so to find gems and gun parts. Both are used to upgrade Collette’s arsenal. Each part you trade in will let you unlock one of 4 stats in any gun – power, ammo, reload speed, and accuracy. Once unlocked, you can shell out cold hard cash to boost said stat. I managed to get through the game, only having fully upgraded my primary gun. You can also upgrade your base health with excess gems. So if you’re a completionist, there’s a lot to do outside of the main quest. 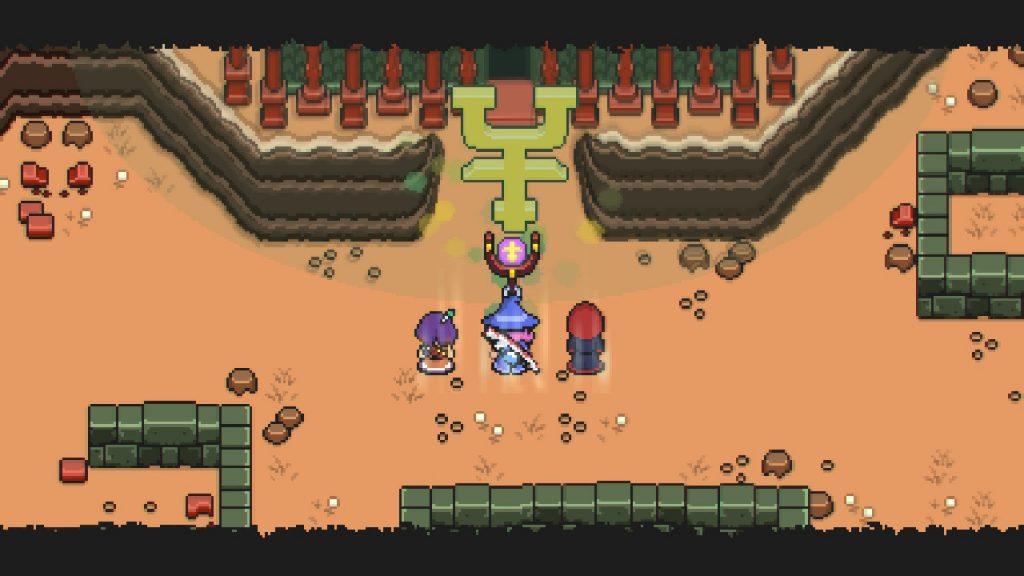 Visually, Trigger Witch will appeal to fans of the classics. It looks a lot like a SNES game, with candy-coated colors everywhere. The game also includes copious amounts of blood, which monsters will leak everywhere as you dispose of them. If this game had been released a few years ago, I’m certain the red blood would have been another color instead, at least on a Nintendo console. So I’m glad it’s not a big deal now. That said, the artwork, though attractive, also left me a bit underwhelmed. There were too many bland environments and flat backgrounds. Worse was the sound design. Though the effects did their job, everything was surprisingly quiet, at least when I played my Switch in handheld mode.

Fumbling in the Dark 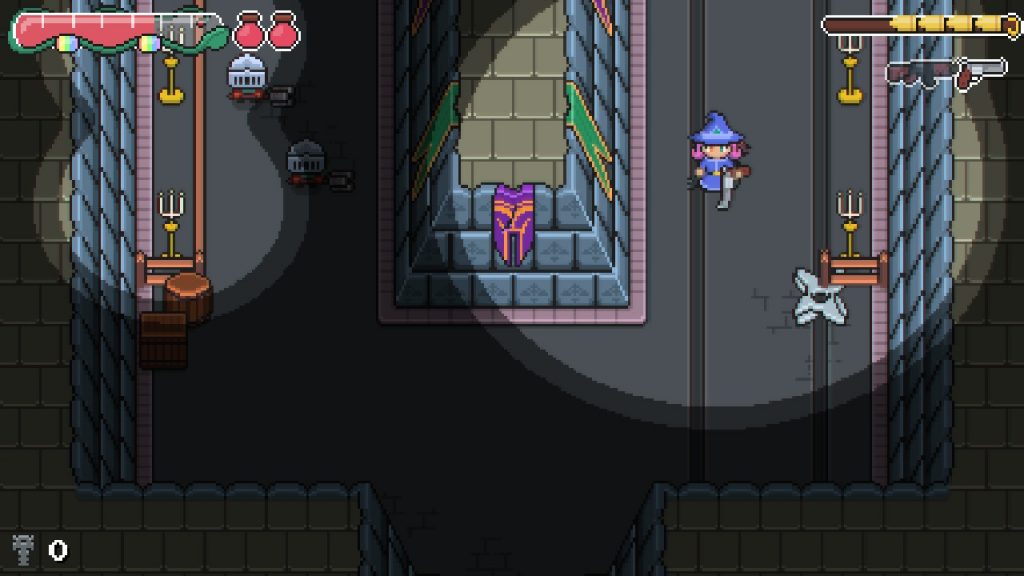 Now I have to touch on my primary complaints. Though the combat mostly delivered for me, I repeatedly encountered an odd quirk that hurt my experience. More than once, both after quitting and returning to the game but also after using a dungeon teleporter, I had my assigned secondary weapons vanish. They weren’t gone; the game just forced me to reselect them. The first time this happened was in the arena I mentioned earlier. I wasn’t sure what had happened, and assumed my captors had confiscated my secondary weapons. I managed to do well enough with my primary gun, but later on, I realized this was a recurring glitch, not an intentional feature. I’ve also had the game randomly change from my default gun to a secondary after a moment of dialogue, which was perplexing. 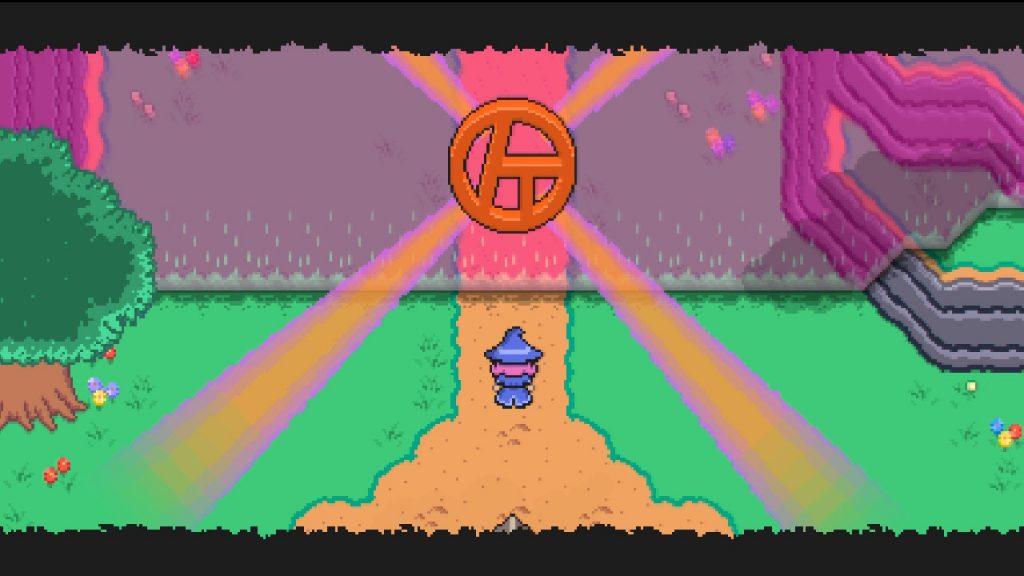 Nothing bad ever comes from floating runes in the sky, right?

Though the game is enjoyable, it’s also very much on the short side. I managed to beat the story in 9 hours, and two of those were only because I got temporarily lost in one dungeon. And though there is some light post-game story content and even a New Game Plus, I just wish I could have spent more time in this crazy world. You’ll only encounter a half dozen or so dungeons in the game, and fewer bosses. Worse, many of the bosses lack interesting mechanics or much challenge. And though I did enjoy the combat, it also felt somewhat one-note. It’s pretty much identical the entire time, other than getting new guns. I almost wish the game featured fewer guns but with more distinct physics and more puzzle uses.

I wish I could sing the praises of Trigger Witch. It’s not a bad game, and I did enjoy my time with it. I just felt it was held back by the scope of the adventure and the aforementioned problems I encountered. As a fan of Reverie, I was hoping this could be another stellar indie from Rainbite. Here’s hoping their next title manages to deliver on the promise of this small indie team. 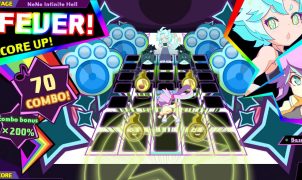 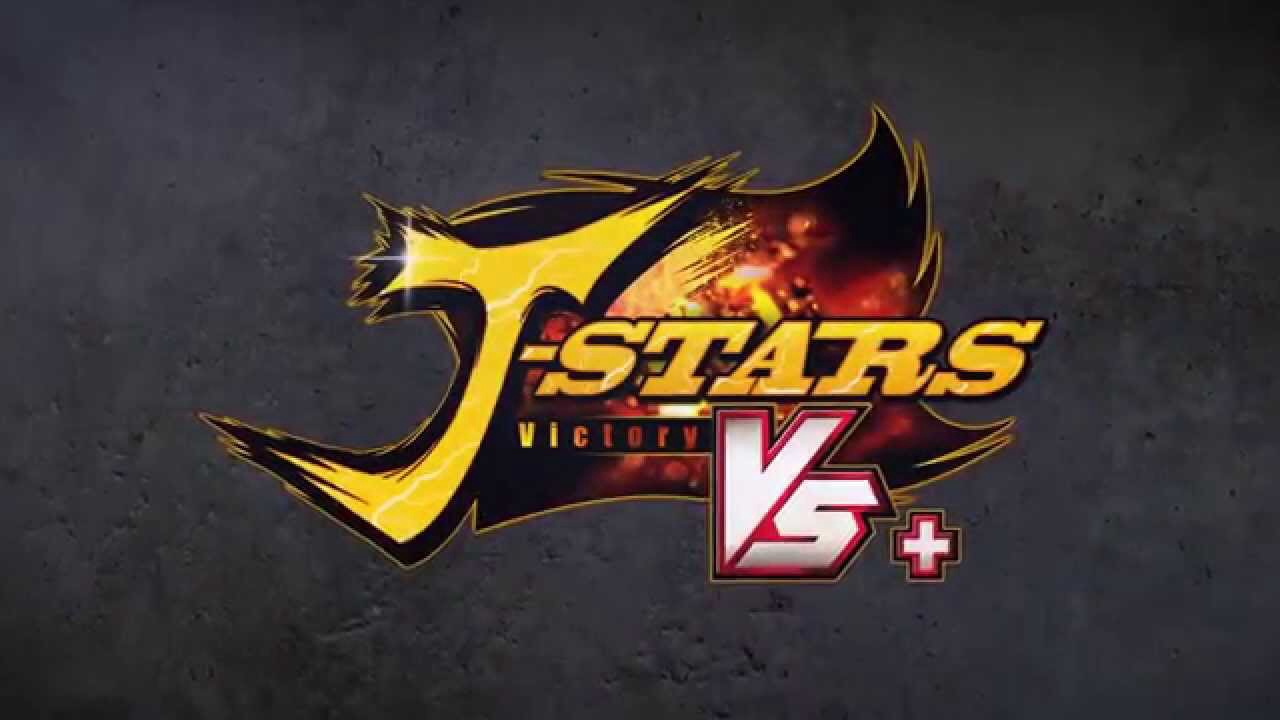