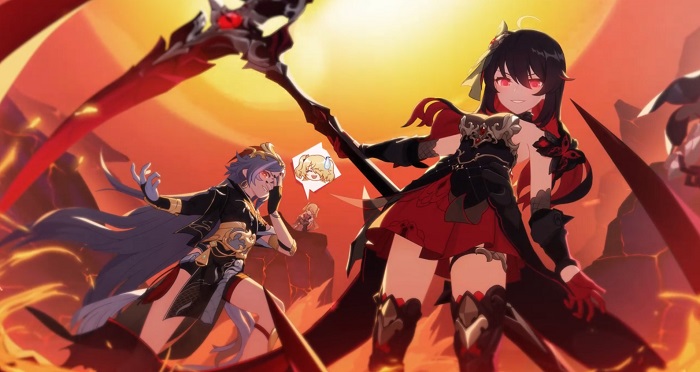 Greetings Captains and Travelers, today we’ll be taking a look at the Proposal 3 Lava Jungle guide for the Honkai Impact 3rd x Genshin Impact Outworld Quest crossover event! We’re on the last Proposal, so let’s make it count and get into it!

You’ll start off on a beach, prompted to head to a sign that you’ll be forced to read. It says that you’ll need to move some barrels to light torches, and once all the torches are lit, you’ll have access to the inland island. Basically, push the barrel to a spot where its explosion will light all of the torches at once. This one is just moving it forward, and then the option to detonate will be at the right of the screen.

Grab the berry and the chest, then move to the next room to the north. You’ll be introduced to the Grey Sword Fighter, whom Fischl is already familiar with. 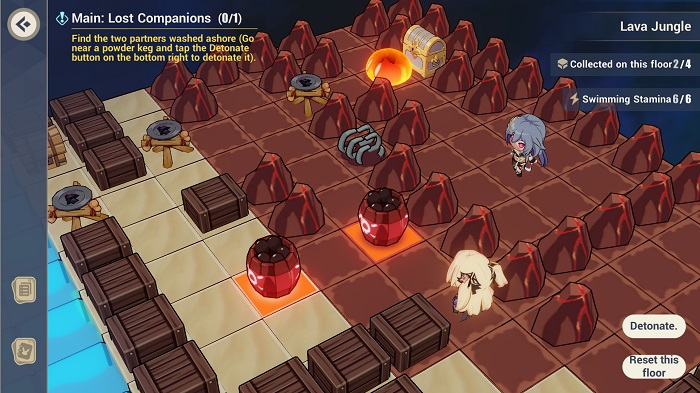 You’ll see that there are two barrels this time. For the left barrel, get to the right of it, push it left, then all the way forward. For the other barrel, just push it until it lines up with the torch at the near end of the path. Press the button to detonate. Then you can claim one common chest to the west, then head east to a fire slime. You’ll do battle with a small platoon of slimes, then have access to a chest with one of Keqing’s skills in it. 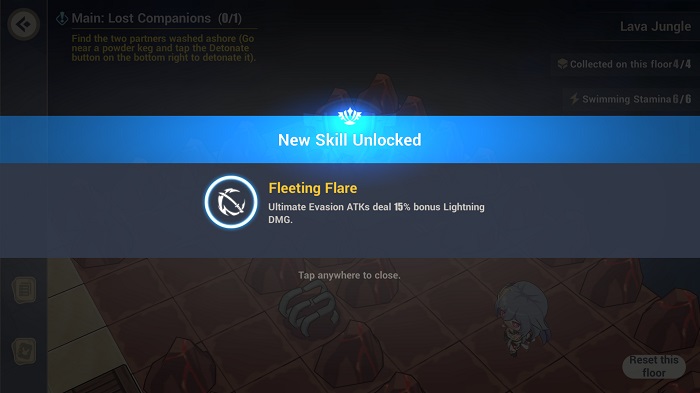 Go north from here and go west from there, interacting with an illuminated palm tree. 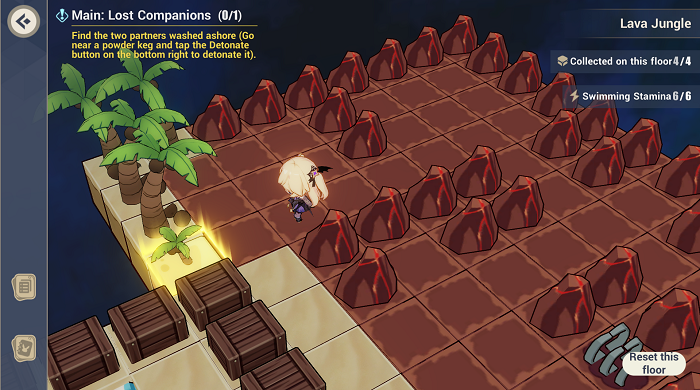 You’ll reveal a girl in the next room to the west. She’s the last member of the team. The golden tile forward will appear nearby. Head to the next floor, then go examine the makeshift tent. 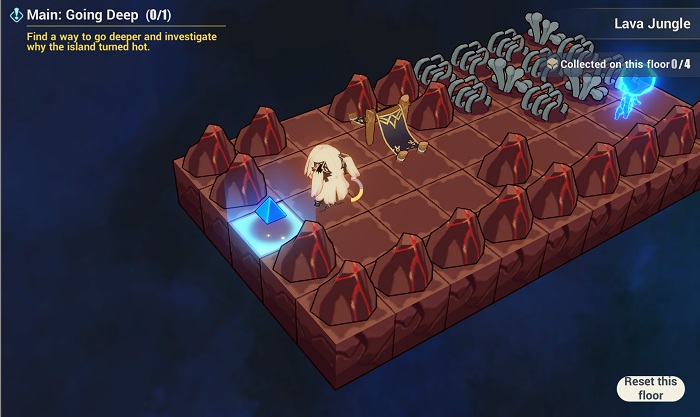 The owner of said tent gives you a passage across the lava to the north. 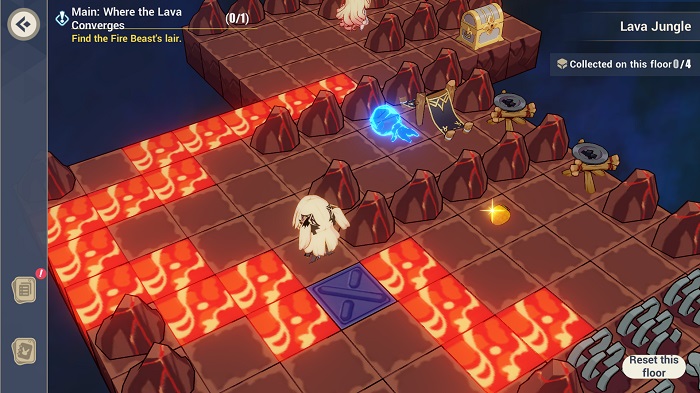 Head that way and across the bridge to get to another room to the north.

There’s an NPC with a sidequest laying on the ground in that room. After talking to him, there’ll be a bridge you can now cross leading northwest along with him giving you a sidequest. 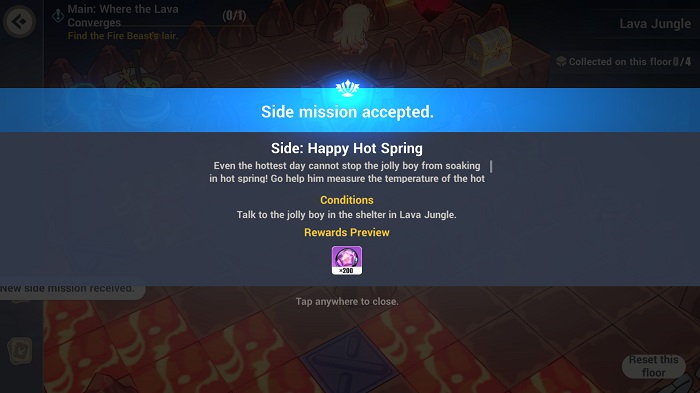 Talk to the NPC and she’ll give you a sidequest that involves getting the NPC near the start of this floor to come home. Not only does he reveal the room to the east, but that room has the hot spring the young boy wanted for the first side quest you picked up. Go inform him of the good news, and he’ll head there. 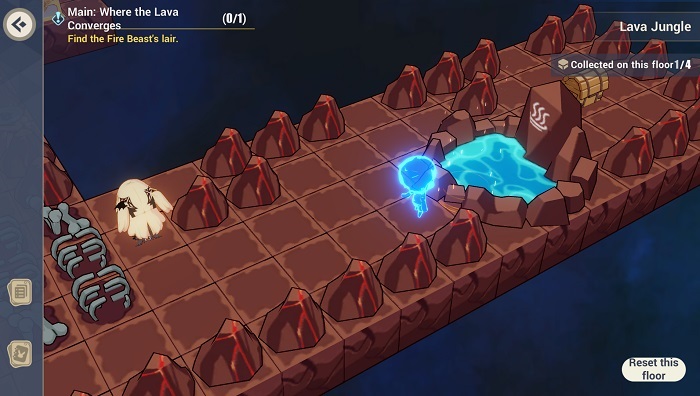 Better yet, if you go talk to the boy again at the hot spring, he’ll give you a chest. 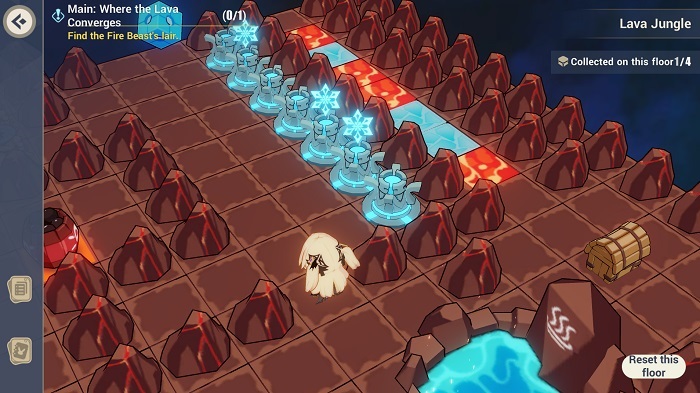 This is a freezing path puzzle where activating certain cryo pillars will freeze certain blocks. Except what they freeze and unfreeze is something that needs to be figured out first. Or you could follow the solution here. Should you screw something up by accident, you can easily reset the puzzle with the cube at the top of the room. With the northern-most pillar being “1”, here’s the order:

Grab your 60 journals from the chest at the end of the icy path, and then we can head to the next room. Go back to the hot spring room, then go to the path that skirts the bone piles. 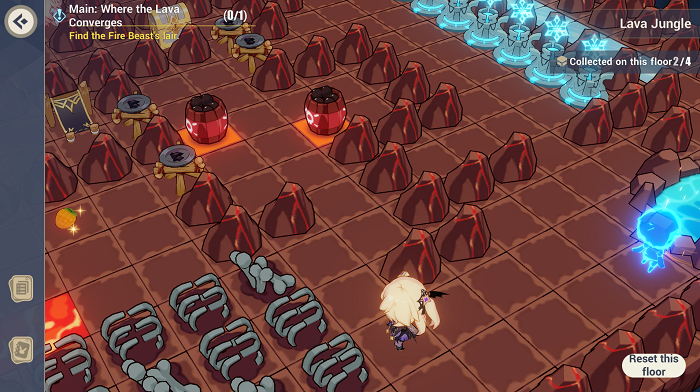 There’s another puzzle for the explosive barrels here. This one requires a bit of doing, but just follow the pictures, and you’ll be fine. 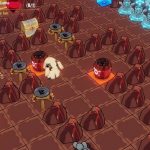 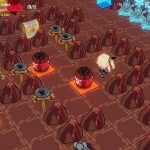 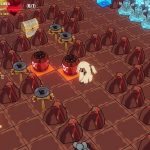 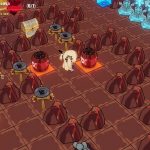 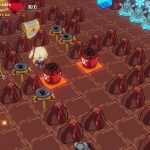 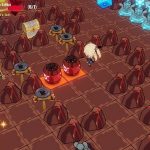 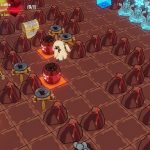 Once you detonate the bombs, you’ll have access to the northernmost room and a Luxurious Chest containing 200 Journals. There’s also now a path to a berry you can pick up. 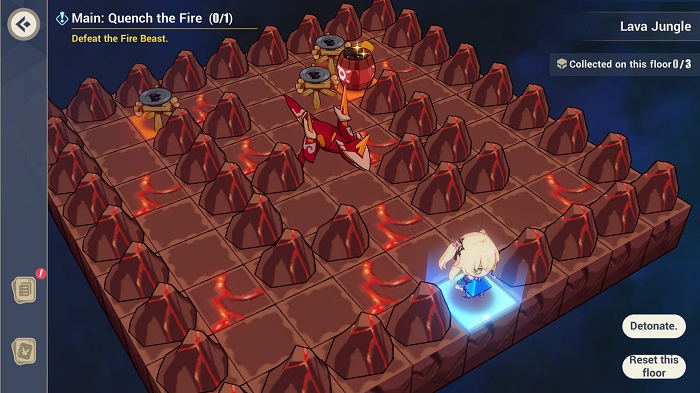 When you get past the cutscene, go northeast for a berry. Don’t worry about detonating the barrel. It won’t do anything yet. Go make an attempt on the fire chicken’s life. Once that thing’s dead, or rather, in hibernation now. Grab your spoils from the Luxurious Chest, then head to the chapter select screen. The last chest will have to wait until you can finish the fight with the Fire Beast.

That’s all for now for the Proposal 3 Lava Jungle guide for Honkai Impact 3rd’s Outworld Quest crossover event! If you haven’t started at all on the event, check out our guide for the first part of Proposal 1 here, and if you haven’t gotten into the game at all yet, download that here! ‘Til next time, this is Captain Cory, signing off! 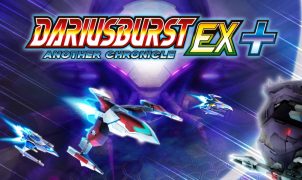 An Okay Port, But Not Much More   The Darius series has never been one of the bigger names in shooters. Despite that, they’ve always been a bit of…