The Remainder is a Hauntingly Beautiful Tumblr Passion Project

The Remainder: A Tale Of Magick, Love, And Lies 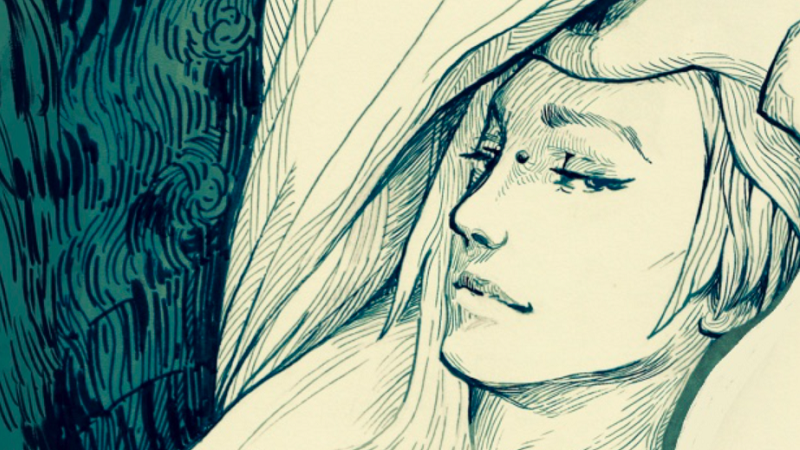 A uniquely hand-drawn visual novel is far too alluring to ignore — especially one like The Remainder. Currently in development by irl married couple Square Weasel Studio, The Remainder is slowly releasing in a series of four parts until its conclusion, after which the full game will be available as a single, complete download. At the time of this writing, The Remainder – Part 1 stands alone, serving players a taste of what’s yet to come.

And wow, what a taste. 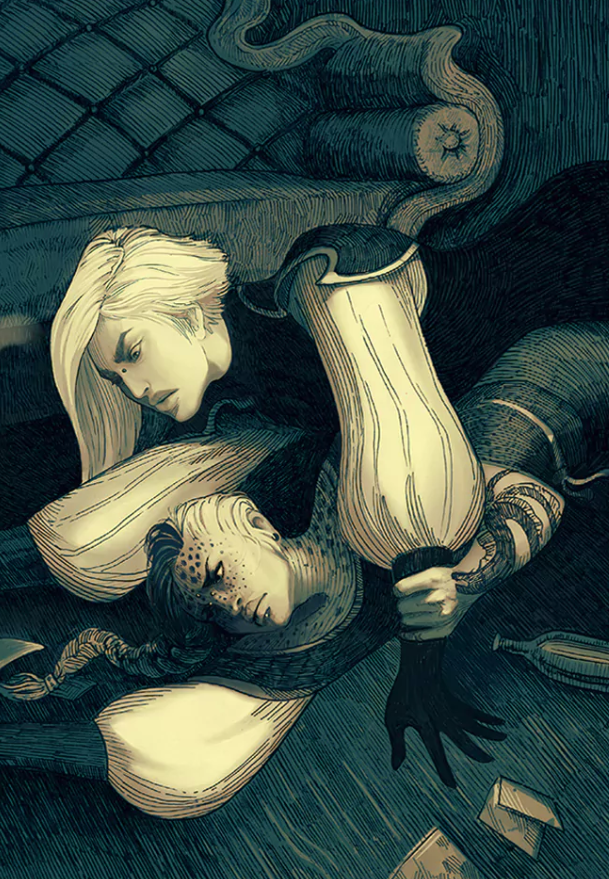 A scintillating, sexy story that blends gothic fiction, pagan mysticism, real-world occult practices, and varied folklore, The Remainder asks players to read through its nearly 200,000 words to uncover mystery after mystery — beginning with the self. Players will take on the role of a once powerful magus who, in their immortality-seeking hubris, broke the chains that held back the darkest depths of hell and lost their own memory in the process. In an effort to quell the ever-present threat of the groaning, malevolent abyss floating in the magus’ office, players must do their best to recall the spell that will banish hell or disappear trying.

Of course, players aren’t left alone in this endeavor; a curious being, Ilar, has graced the reader with their presence, although there’s something they’re absolutely holding back. Keeping mum about their relationship, Ilar serves more as a tacit guide than a true comfort, although they certainly have their reasons for their silence. Reasons players will uncover as precious time ticks forward. 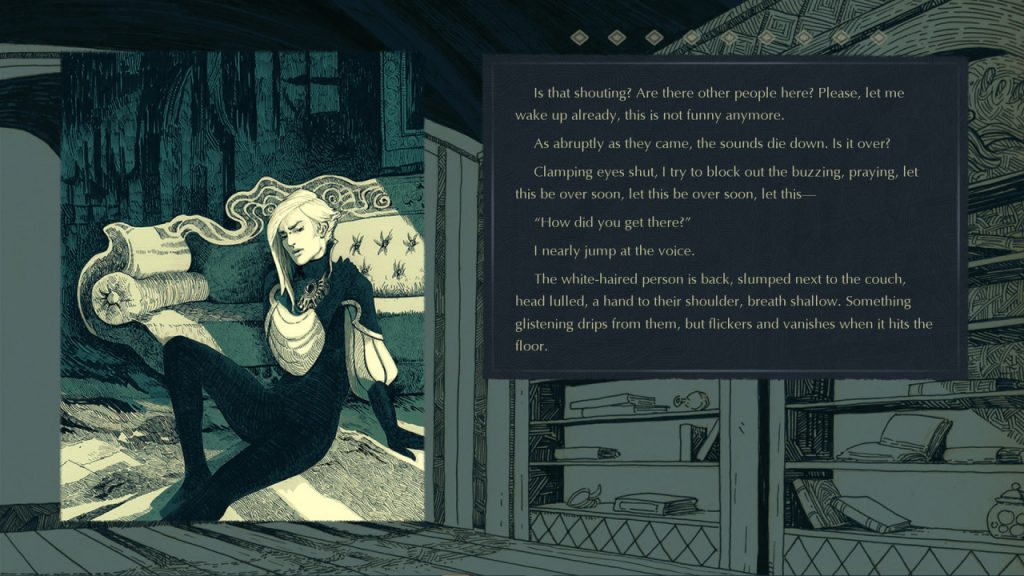 As for The Remainder’s story, it feels extremely developed to the point that it seems to ask players to give it a minimum of two playthroughs. Which, considering choices matter in this dark fantasy visual novel, that’s not really a problem, but it feels necessary to say. The story starts off strong and absolutely draws the reader in, but after a good 15 minutes there’s a lot of information that can be a bit hard to digest. Towards the middle, however, I found myself again captivated by the strong writing and finding a foothold in this lore-filled, lived-in world. Be prepared to get lost in the world of The Remainder, and I mean that in the best possible way.

Although I’d say visual novels are generally LGBT-friendly as they commonly allow the player to choose their gender, The Remainder takes this up a notch with its conspicuous usage of gender-neutral pronouns. Ilar is referred to by they/them pronouns, while another character’s pronouns are xe/xer. The way in which this was implemented was very natural — the characters did not have to remind the players of their pronouns, they were automatically used. I found it refreshing that this was just a given, as there was certainly the option to remind an amnesiac of a person’s gender. 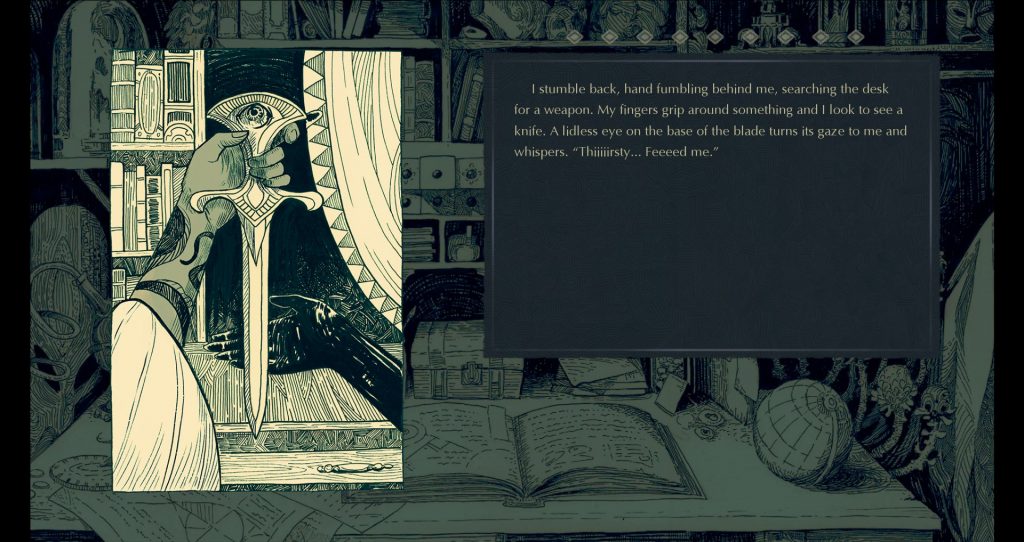 Speaking of amnesia, I found the way in which The Remainder handled the matter to be better than most games. As Conan O’Brien once humorously pointed out while playing Amnesia, if amnesia is suspected, people are asked their name, the year, and where they’re from; if they can correctly answer those questions, perhaps they don’t have total amnesia. The Remainder uses amnesia as an opportunity to allow the player to choose their appearance and their name, but takes it a step further and tries to get you to guess Ilar’s name. Thinking I was going to name this mysterious figure, I typed in a different name entirely, only to be chastised for getting it wrong. It was one of several potent reminders that drove home how much I had forgotten.

It would be a crime to end this article without a mention of The Remainder’s aesthetics — obviously the hand-drawn characters were alluring, but the environments were just as enchanting. I particularly liked how much movement happened while the story progressed, such as floating books slowly crossing the screen behind characters or blurred, rotating backgrounds serving to heighten disorientation during dizzying moments. Coupled with the typically ambient, occasionally heart-palpitating, but always incredible music, The Remainder pleases, then intrigues the senses.

Be sure to check out The Remainder – Act 1 on Steam today, and follow its development on Tumblr!

They know how to do it and they do it real well. Victor Vran: Overkill Edition delivers on promises of a console release for the original Victor Vran and…