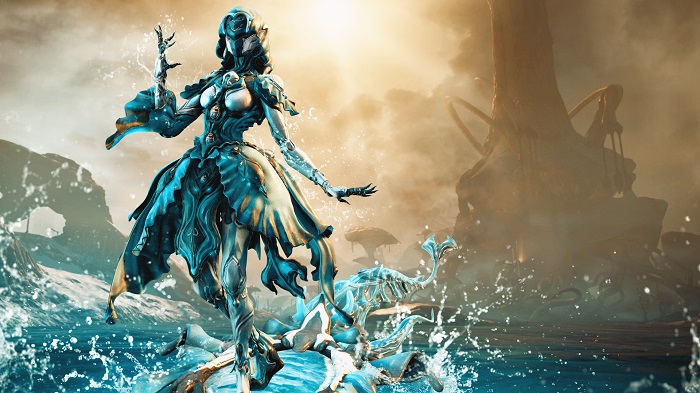 Greetings Tenno, Cory here to give you the heads up on how Warframe’s local surfer chick gets along, so check out our Yareli guide and see what the verdict is for her!

First and foremost, this is how she plays as of July 7th’s hotfix, so if she has any buffs or nerfs from here, your results may vary. We’ll start off by taking a look at how you can obtain her, which involves the Clan Dojos or, if you have money, purchasing her with Platinum. For the sake of brevity, it’s advised to join a clan if you want to actually build the frame yourself. There’s a special room that you’ll need to build if it isn’t there already called the Bash Lab. You’ll have a list of materials to gather, which you can find below. 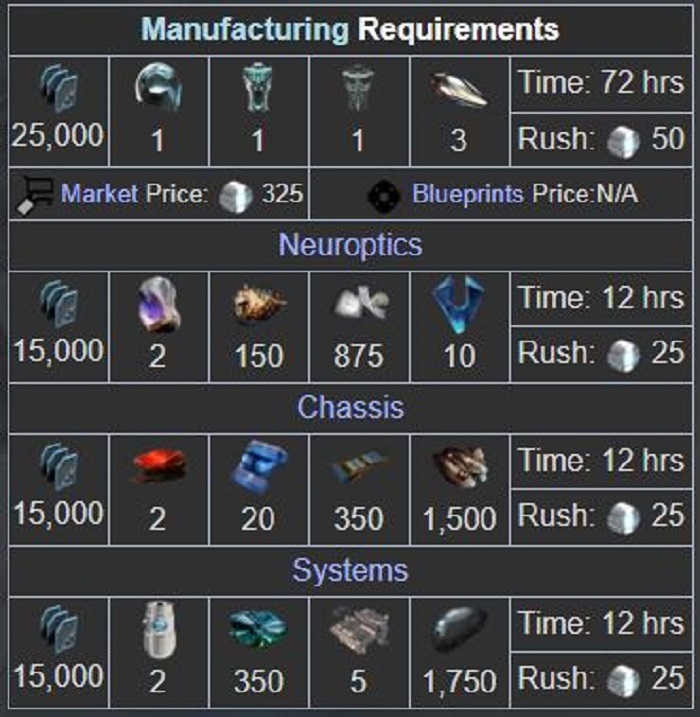 Courtesy of the wonderful folk at the Warframe Wiki (www.warframe.fandom.com)

Once you secure access to the room, the next step is getting through the Waverider quest, so I hope you brushed up on your K-Drive skills! This quest is no slouch if you aren’t keeping up with your K-Drive stats. Get some mods if need be; you’ll probably need them. Most of the feats that need to be done on that quest are pretty self-explanatory, but here are a few tips for some of the harder ones. Once you hit the second set of feats, you’ll need to reach some trick point thresholds. These escalate all the way to 2,000 points in a single combo. While this does sound a bit too high, there are some workarounds that a friend of mine helped me track down. 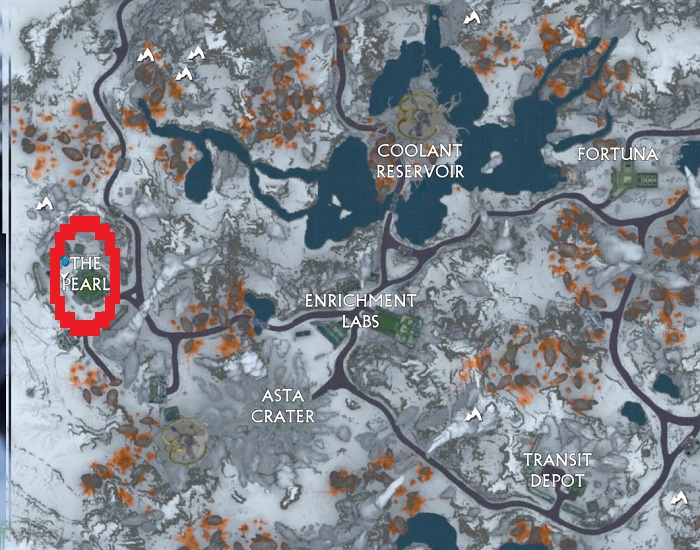 There’s a spot towards the west called The Pearl. In the middle is a ring that’s grindable, making that a perfect spot to keep a decent combo going while you circle the ring. Just be cautious of the occasional Corpus straggler and getting dizzy spinning in circles for several minutes at a time. I think they’ve also nerfed the grinding rail lock-on, because I don’t recall it being as difficult as it is now to keep locked on to rails, so be precise when you get ready to board onto the rails. There’s also a challenge to get a certain amount of standing per race, going as high as 4,000, but there is a single race capable of giving up to 5,000 called Meat and Greet just a touch east on the southmost edge of the map. 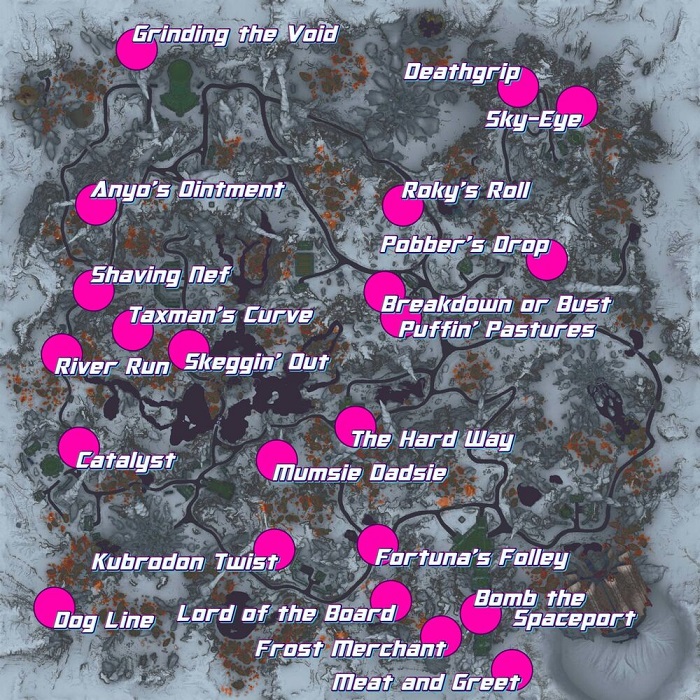 Courtesy, again, of the wonderful folks at the Warframe Wiki (www.warframe.fandom.com)

Once you make it through the Ventkid’s trials, you’ll get the primary blueprint for Yareli. Make the Neuroptics, Systems, and Chassis, and you can finish up making your new Warframe.

Let’s take a look at her abilities and judge them accordingly.

Sadly her kit is rather lackluster. There’s little room for decent damage numbers, and while her ability does lean towards mobility and moving around enemies to escape damage, it doesn’t allow for very good crowd control. Sea Snares winds up missing or just not doing enough damage to make it count, Aquablades doesn’t scale with Riptide can help some with getting a decent crowd control, but the damage doesn’t scale up high enough to really make it more of an inconvenience with the enemy. I’ll put down here my mod selection I had been playing with. I focused on energy gain, shields, and some auxiliary mods like Power Drift and Quick Thinking. I avoided Arcanes for the time being since I wanted to see how a raw mod package would work, to limited results. 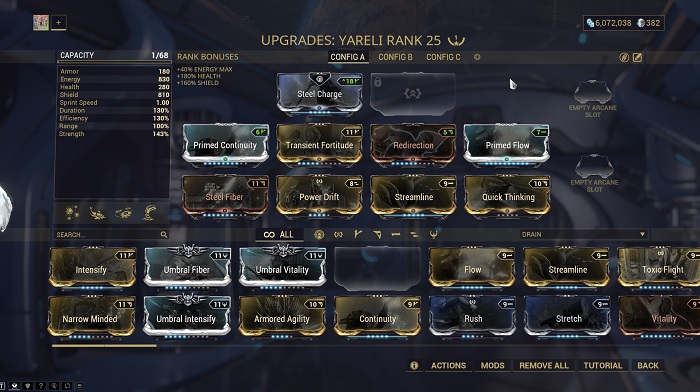 While I would’ve loved to have a more spread-out kit, it took a lot of work to make sure she wasn’t getting one-shot in later-level content. You’ll want to keep her energy retention high, but that said, get a pistol aura mod, not an energy recharge one. Don’t worry in the slightest about ability duration or ability range. It doesn’t hold much weight on her skills, so focus on damage and buffing her shields so you can survive a little better.

Lastly, let’s look at the one bright side to her, and that’s her design. I honestly thought DE (Digital Extremes) was cashing in on the whole cutesy V-Tuber craze, making her more like a pop idol than a Warframe, but fitting into the lore as a motherly figure to the Vent Kids made me a bit endeared to her myself. The flowing frills and gentle curves make her fairly aesthetically pleasing, and the design choices for how colors work really opened up some nice color schemes for her. The way her skirt has that color gradient makes some really smooth, eye-catching colors, and the frills being set to the secondary color makes for some easy detailing. I’d be lying if I said I didn’t think much of her design scheme. It’s probably the most redeeming thing about her and probably why I’ll use her whenever I’m screwing around with K-Drive races or running around Cetus Plains or Orb Vallis for fishing and mining. I have no qualms if she winds up like Nyx and is only used because I like the design (which is a totally valid way to play!). That said, DE really needs to fix how some of the attachments get placed. There were a few of them that I tried to put on her arms that went entirely in the wrong directions. Plus, if you look at the picture below, you’ll notice the attachments for the legs are slightly askew (pay attention to the little handlebar-looking parts, one’s out farther than the other). 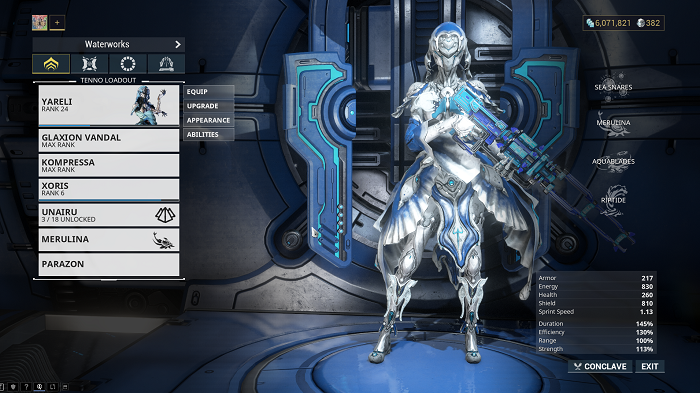 All in all, that’s the gist of what to expect from Yareli. Unfortunately, the patron saint of K-Drive didn’t come out in first place here. Her abilities are subpar and difficult in building up to something that can keep up with how the game’s difficulty is progressing. The Merulina was such a neat idea but didn’t get fleshed out in the way it should’ve. You can’t even mod it, something vital to K-Drives getting better air and smoother rides! When you drop features already in the thing you’re mimicking, you’re kinda screwing yourself over. Yet, despite all these flaws, I hope sometime in the future we might see a rework for her that’ll make her more than just a pretty face. Remember, no matter how bad a ‘frame gets, DE actually managed to salvage Vauban of all things, so there is always hope somewhere that she may rise in the ranks someday.

That concludes the guide and overview for Yareli. Found a better mod setup, or maybe just want to talk about your thoughts? Drop them in the comments below. Don’t forget, on July 17th, we’ll be seeing Tennocon, and here’s the link to the info for that! Til next time, Tenno, this is Cory from HPP signing off! 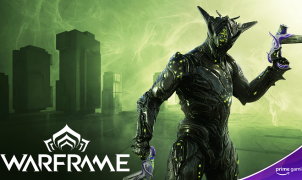 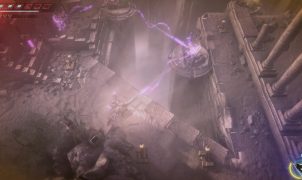 Crossing Souls Channels The Spirit of The 80s to Deliver a Nostalgic Adventure Crossing Souls is a game that wears its pixelated heart proudly on its cut-off denim sleeve.…