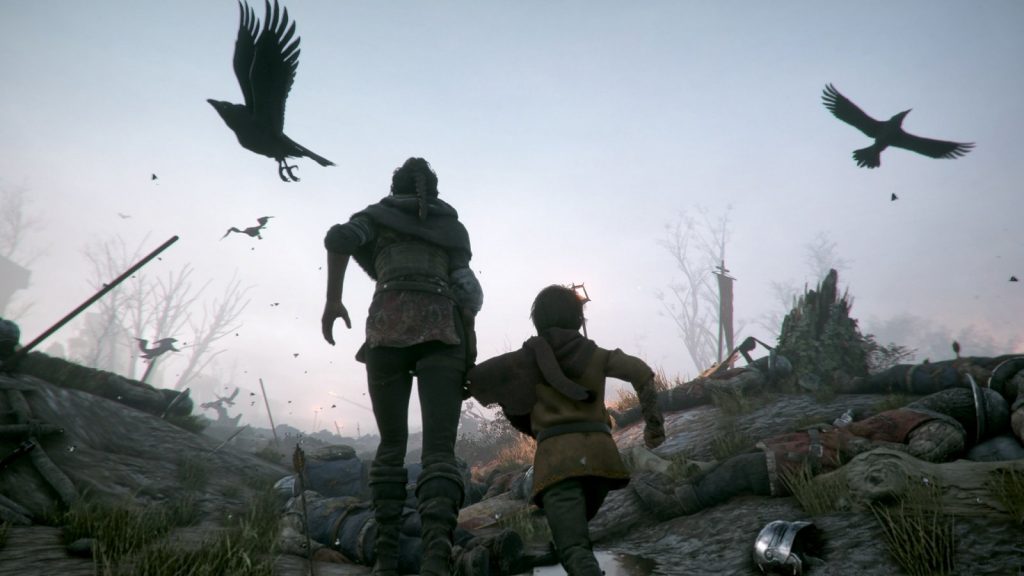 Video games tend to take place in a pretty stock set of environments with a fairly standard set of lead characters. There are of course exceptions, but A Plague Tale: Innocence may be one of the more dramatic I can remember. Fifteen-year-old girls are so rarely leads, especially in western games, and it’s incredibly refreshing to get a different perspective. I also love how this is a game set in the distant past, 1348 to be exact, that isn’t a total fantasy setting. While A Plague Tale may not be founded in historical realism, it is at least vaguely set in the real world, albeit with some fantastical elements layered onto the history. 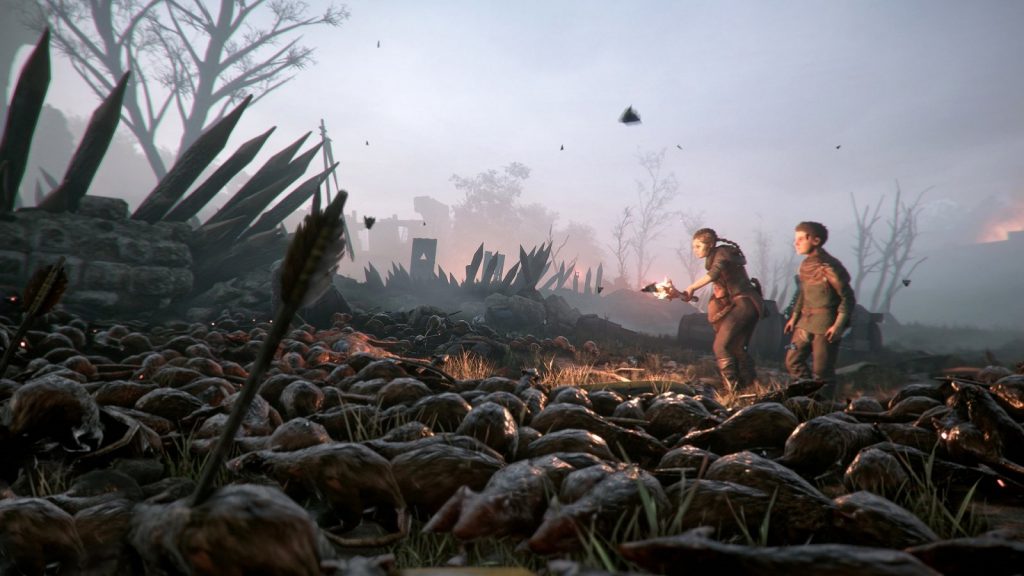 1348 happens to be right in the middle of The Black Death, the most fatal pandemic of all time. You play as Amecia de Rune, a girl coming into her own thrust into a horrifying situation when the plague comes to her doorstep. While an ancient curse involving her brother and his connection to the plague isn’t the game’s most historically accurate element, it does a great job of fully exploring the horror of this period in history in a way which is more visceral and immediate than a more realistic depiction would allow.

When the Inquisition show up at her home wanting her brother, Amecia’s parents fight with their very lives to allow their children the chance to escape. Now this young girl, tough, but also from a noble family and very privileged for the time, is forced to fight for her very life. She has to do it while taking care of her five year old brother Hugo, who she has little relationship with, as well. That would be a lot of sudden responsibility for anyone, let alone one in her situation.

Their relationship sits at the core of A Plague Tale: Innocence and it’s the game’s greatest strength. Hugo can be horribly annoying, constantly demanding your attention, making stupid mistakes, but he also grows on you. It reminded me of dealing with a real five year old at times, which I appreciated. Soon you feel that protective instinct that family tends to elicit. That’s good, because you’ll spend most of the game keeping him alive. 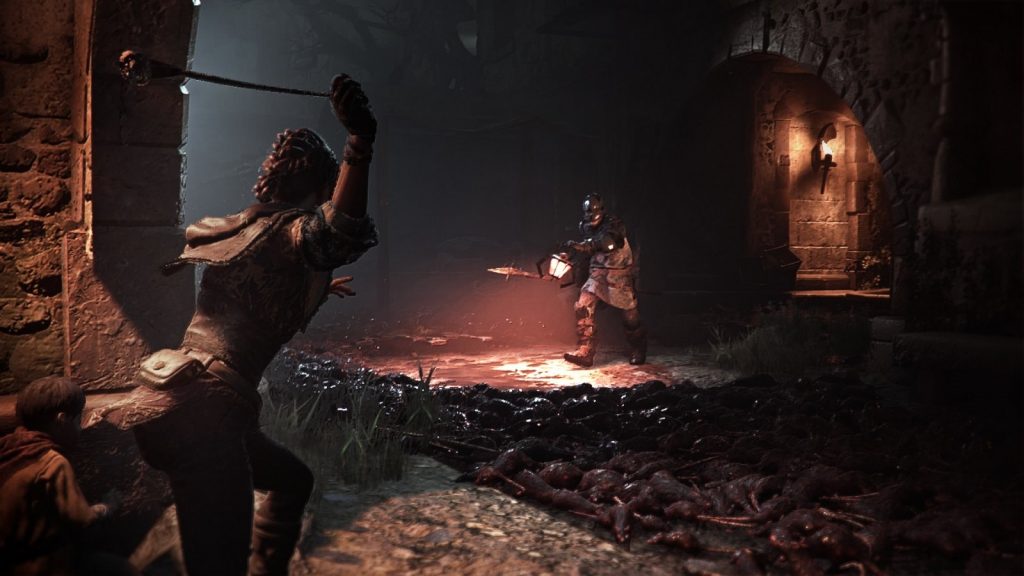 At its core, A Plague Tale: Innocence is more an adventure game than an action one. Most of the game is spent sneaking or running, with combat often the last thing you want. You’re playing children after all, up against adults who often want them dead. If you’re caught it’s often an instant game over. Most areas require you to sneak through them, using the environment and the few tools you have available like rocks and pots to distract enemies so you can move past them. This is usually fairly simple but there are some tricky sections which will really push you to think about the environment and how you can manipulate it.

While keeping Hugo and yourself alive is satisfying, the biggest issue with A Plague Tale is that it seems to run out of ideas fairly quickly. You earn new tools as the game goes on. Abilities that can allow you to take out an enemy from behind, melt their helmets, throw fire, and more. Yet for the most part these don’t really alter the gameplay much. They just provide a different solution now and then.

My least favorite part is how linear things are. Not in the progression, that’s fine as this is a heavily story-based game telling a fascinating tale. The main issue is that every section feels like it has a set solution. There’s one way you’re supposed to get through it. You might now and then be able to get a bit creative, but even when you do it feels almost more like you’re tricking the game rather than things being designed around giving you choices.

Starts Stronger Than It Ends 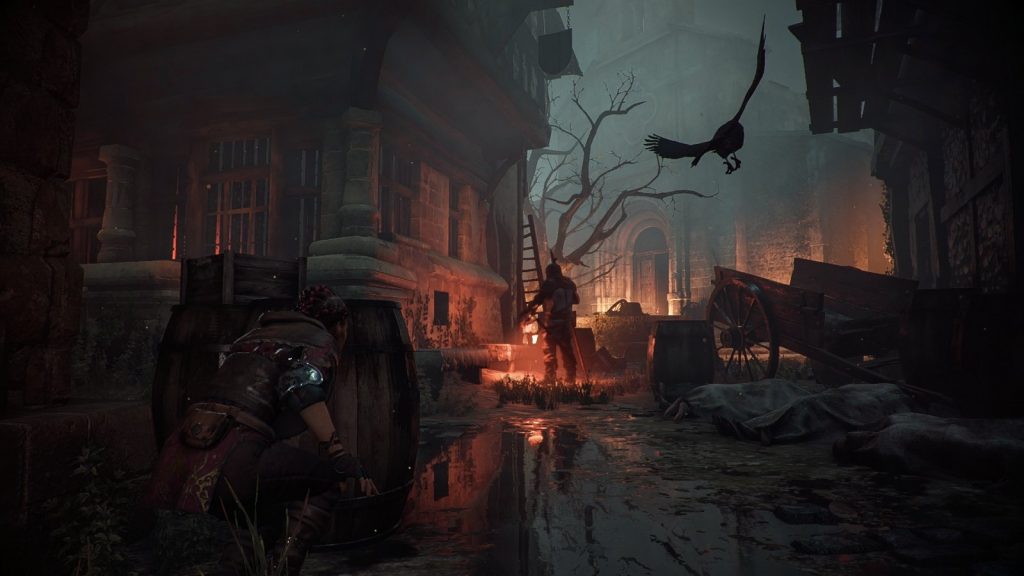 More action does show up as the game goes on, more sequences where Amecia is forced to stand and fight. Her horror in these moments is palpable and hurt me to my core. Her religious upbringing makes her search for any other solution, yet she can find none and is forced to defend herself or die, letting those she loves perish as well.

These sections are painful on more than an emotional level however. Combat is often done using a combination of just a few moves such as your sling, your most trusted option throughout the game. Yet the controls when firing quickly or when reacting to changing situations aren’t nearly precise enough to support this. These sections can turn frustrating quickly as you die repeatedly, never feeling like you’re learning anything or getting better. When I would finally pass one of them, it often felt more like luck than anything else.

The deeper you get into the game, the weaker the story gets as well. While it’s an original and interesting tale, with great characters and a strong sibling connection keeping it worthwhile throughout, some of the twists in the second half simply don’t work. We start to see more of our pursuers and their motivations are far too simple. The chief antagonist might as well be twirling a mustache. When you spend the entire game running from someone, it helps if they’re at least somewhat interesting.

The Best Place To Play 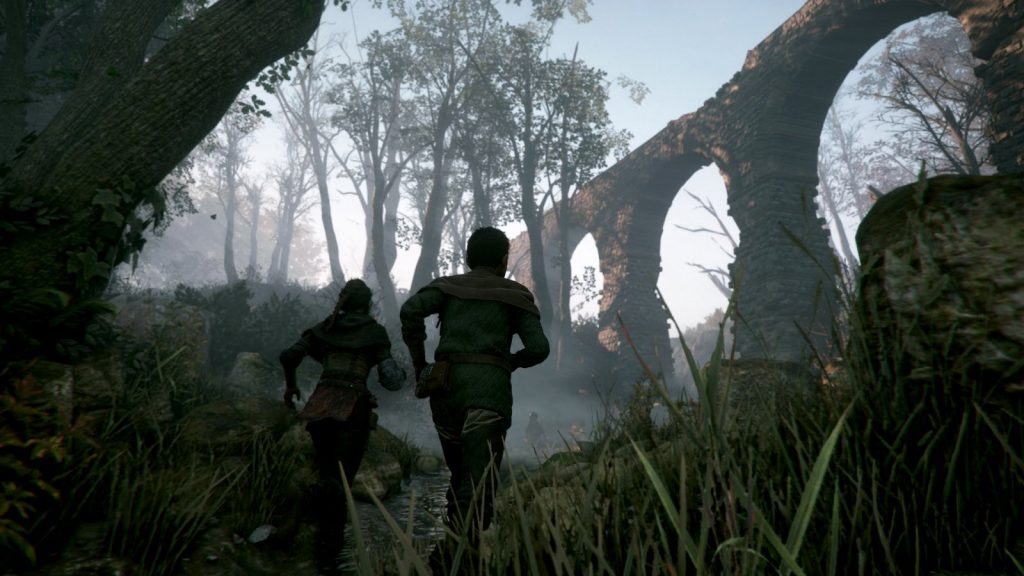 A Plague Tale on the PS5 makes great use of the system’s best features. Loading times are super fast, taking a little of the edge off the frustration of dying. The usage of the DualSense controller is fantastic, among the best on the system. Now only do you really feel the tension when using your sling, but even movement feels great. When rats are coming, you can literally feel them. Moving over flat ground feels very different from fighting through mud. It takes an already tense and horrifying game and amps things up to a new level.

The visuals have also received a nice overhaul and for the most part look better than ever. Everything is sharp with enhanced detail and focus. The most impressive thing might be the lighting work. It really helped immerse me in some of the game’s more horrifying sections. Everything also runs at an incredibly smooth 60fps now which is great. What isn’t so great is that the original game’s motion blur, already distracting, feels even worse with this smoother version. It’s downright distracting at times and I could find no way to disable it.

With improved graphics and fantastic use of the DualSense, the PS5 is the best place to play A Plague Tale. This is a unique, interesting story which is well worth your time. I just with that playing it was more interesting. Long sections of the game are only saved by strong atmosphere and your connection to these characters. Linear gameplay and controls that don’t hold up well in intense moments lead to frequent frustration and a game which feels like it goes on longer than it needs to. If you know what you’re getting into, however, there’s still enough good in A Plague Tale: Innocence to be worth your time.

Full disclosure: This review is based on a retail copy of A Plague Tale: Innocence. 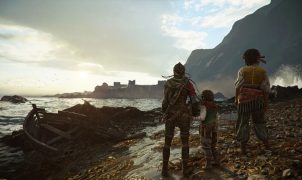