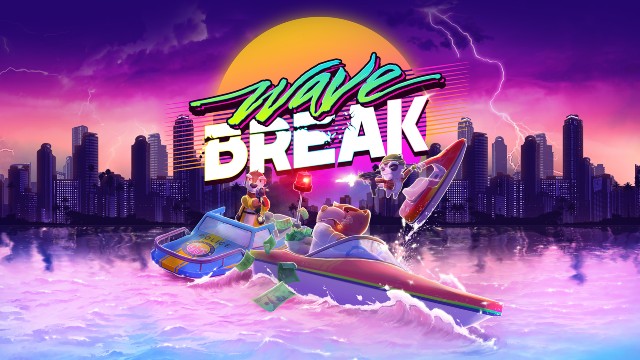 Wave Break is an interesting beast. The developers bill it as a “skateboating” game, and that’s accurate. It’s a bit like the developers took Wave Race and Tony Hawk’s Pro Skater and smashed them together. Normally, game and genre mashups concern me, but when you think about it, you can see how much the two games have in common.

The issue for me is that I’m bad at games involving tricks. As much as I enjoy Wave Race’s racing, I never bothered with the trick modes because I could never remember the moves in the heat of the moment. In the same vein, I haven’t touched a Tony Hawk game since Tony Hawk’s Underground on the GameCube, and that was back in 2003. Of course, I had the same problem there. This is also the same reason that I can’t play any fighter that isn’t Super Smash Bros. Unless I have the moves written down and in front of my face, I won’t remember them.

I want to make something clear right out of the gate: I am not penalizing the game for my subpar memory. That’s on me. In fact, it’s a testament to the game’s design that, despite that issue, I still had a blast tricking, boating, and shooting my way throughout the levels, even when my run would end in a neck-breaking crash or a fiery explosion due to my own incompetence. 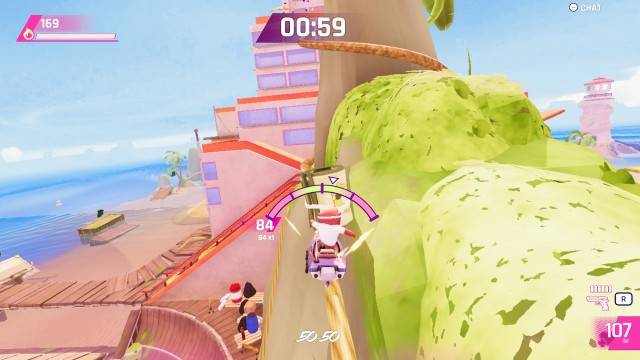 Wave Break kicks off with a helpful tutorial that teaches you how to drive and shoot. It also gives you an opportunity to get a handle on the controls for executing the more complicated tricks. It didn’t take long for me to learn how to jump out windows while doing a 720° grab. The controls are natural and intuitive. There’s a good variety of grabs, flips, and grinds, and chaining combos together is the key to raking in big points. You can also revisit the tutorial from the options menu, which I obviously appreciated.

It’s not enough to know how to do those tricks either. You must know how and when to take advantage of the game’s varied environments. You can grind on almost anything that has an edge or flat surface, and there’s plenty of opportunities for big air off jumps and other objects. If you can see it and reach it, you can probably use it for something. It’s not uncommon to be able to grind a building’s circumference or to the top of a lighthouse, for instance, assuming you can keep your balance.

While the controls are solid for the most part, they can be a little finicky due to the boat’s nature. Regardless of the surface you’re on, your boat feels much more like a skateboard than a boat. It’s a little odd on the water because it doesn’t feel at all like driving a boat. You don’t cause any wake, and you don’t have to worry about waves or currents. Even waves caused by waterfalls, for instance, don’t affect your boat. It’s a small and expected learning curve, but Tony Hawk fans should take note of it. It’s just different enough to throw you off until you’ve played for a few hours.

The Mission: Trick and Get Paid 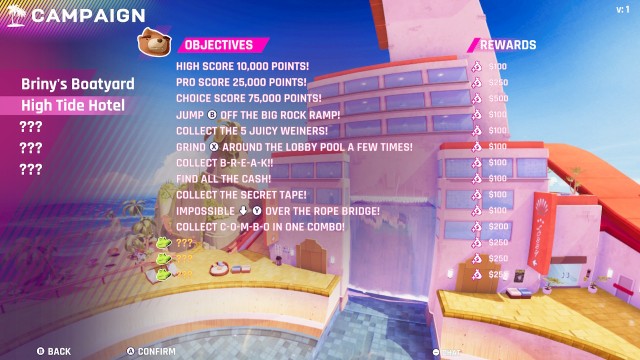 Surprisingly, Wave Break includes a campaign mode that takes you through the game’s levels. Each level is interesting and different. There’s a rusty boatyard, a tropical hotel, an arctic petroleum complex, a canyon oasis, and a sprawling metropolis. There’s plenty to see and do, and each level is designed to maximize your tricking. There are also secrets and surprises, some of which are hidden behind destructible walls, so keep an eye out while you’re skateboating around.

The campaign mode gives you a variety of objectives to accomplish in each level. For example, you’ll need to hit specific point goals, find items, and interact with the environment. Wave Break’s ridiculous narrative borrows from the 1980s TV show, Miami Vice. This allows the developers to come up with all sorts of crazy objectives. For example, in one level, a rival steals your goods (*cough* drugs *cough*), and you’re tasked with blowing up the yacht where they were hidden, murdering the thief, and delivering the reacquired loot to the customer.

Yes, that’s right. In addition to skateboating, you can also acquire a variety of weapons that allow you to murder your adversaries. So, in addition to a little Wave Race and a lot of Tony Hawk, there’s a bit of Twisted Metal in Wave Break’s DNA, too. It works just as well as the other components. Who knew anthropomorphic animals could be involved in such shady business?

Can I Shoot the Clock? 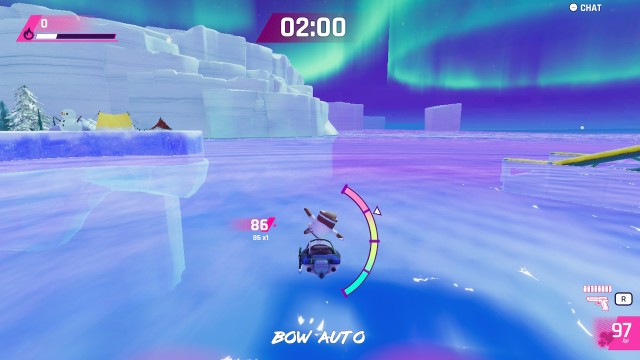 The first level is available at the beginning, but each subsequent level requires a specific amount of cash to unlock, which you earn by completing objectives. There are enough objectives and enough variety that I didn’t struggle too much. You can also increase your stats and purchase vanity items with the dough you’ve collected.

I quite enjoyed the variety in Wave Break’s campaign mode, but I didn’t appreciate the time limit. It’s hard to accomplish anything in three minutes. In fact, it’ll take a few sessions before you even learn the levels’ layouts. When you begin a level, the game will show you hints for each objective, which is helpful, but that can only get you so far. You still need to learn the layout. You can somewhat circumvent this in freeplay mode. None of the objectives are present, but you can boat around to your heart’s content. Still, it would have been nice to bump up that time limit or to have a time limit only trigger for specific objectives.

In addition to the campaign and freeplay modes, there’s also time attack and deathmatch, both of which are exactly what they sound like. There’s also an online mode, but I struggled to find others to play with. Unfortunately, Wave Break doesn’t have local play in the Switch version. This incredible oversight should be addressed immediately. The game is built for local mayhem. Just imagine this hypothetical: you’ve just pulled off an incredible combo, and you’re about to earn tens of thousands of points when you land, but right before you do, your buddy shoots you to death and ruins everything. Wave Break would be a wild ride with four players, and I hope the developers can make it work.

Design the Future of Skateboating 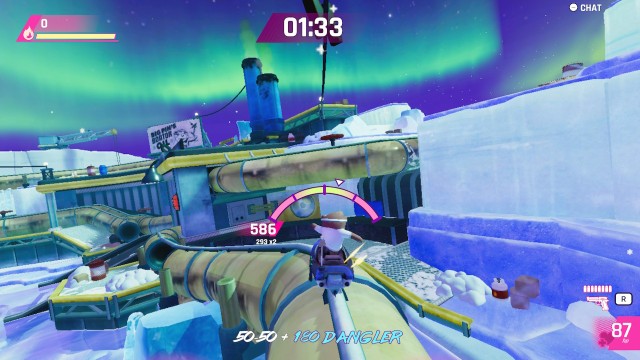 Wave Break wisely includes a park editor that allows you to design your own levels. The toolset is extensive, and it includes several levels designed by the developers. After you make your level, you can test it and add it to the main menu to play later. I managed to put together an uninspiring level in about a half an hour. The intuitive process makes it easy to quickly assemble anything you want. I have no doubt that other users will come up with crazy designs that rival what the developers made.

Unfortunately, there’s no way to share or download user-designed levels in the Switch version. It’s another tragic omission that limits Wave Break’s longevity. While the five included levels are large and intricate, it doesn’t take too long to see everything. When you reach that point, you’re left with beating your own high scores, playing against the CPU, and playing online. The Steam version includes this feature, but maybe it’s too complicated for the Switch. I’d still take local play over this, if it comes down to one or the other.

On that note, Wave Break does include an event mode that feature new levels. The current level features Weezer and their new song. This level is smaller than the others and has fewer objectives, but it’s still a welcome addition. The developers are planning on releasing additional content through this mode, so it’ll be interesting to see what else they create in the future. 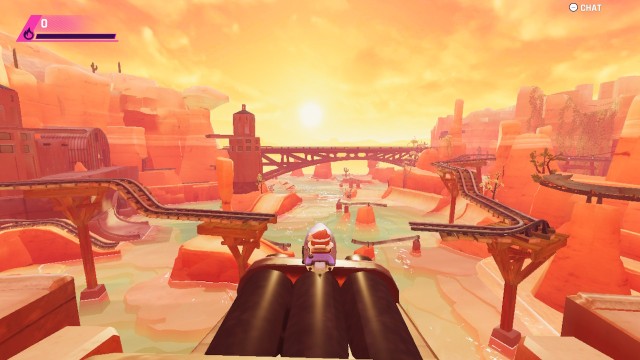 Wave Break’s visual style is inviting, even though the texture work is a little rough. I do wish the water looked more like water, even if it doesn’t behave like it. Due to the lack of waves and wake, the water feels flat. You bob a bit as you drive, but a little more effort could have been put into making the water, well, water-like. I know it can’t behave like water because that would make performing skateboard-style tricks too difficult, but a few visual flourishes would have enhanced the experience. You won’t notice it in the middle of a run, and it doesn’t affect the gameplay, but it’s off enough to bother me.

I can’t end my review without mentioning Wave Break’s outstanding synthwave soundtrack. I don’t know any of the musicians, and I don’t know any of the songs, yet it’s one of the catchiest soundtracks I’ve heard in a long time. Some songs feel like they might have been influenced by Depeche Mode and Kylie Minogue, and I’m pretty sure Michael Bolton’s saxophone (just it, not the man, thankfully) makes a guest appearance. There were multiple times that I just stopped playing to listen to the soundtrack. It’s the standout component in Wave Break’s presentation, and I could easily listen to it without playing.

Wave Break is a frantic, over-the-top skateboater with style and moves to burn. Its campaign mode is a welcome addition, and online play and a park editor add variety. All the pieces are here for a sublime tricking experience. The only thing missing is the Steam version’s features, most notably local play. The game is practically screaming for it, and the gameplay perfectly lends itself to local matches.