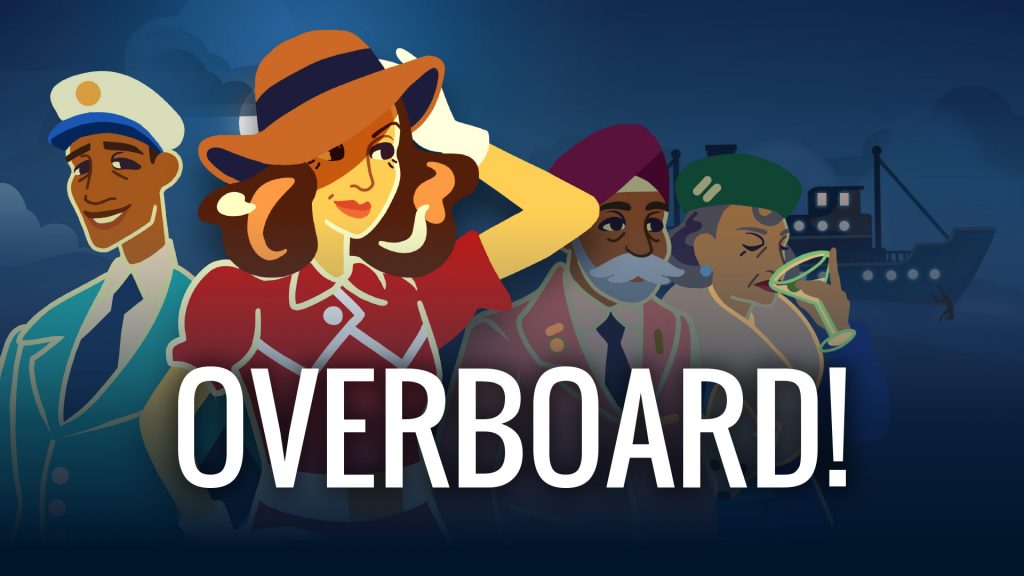 It’s 1935. You’re Veronica Villensey, a former actress whose star has faded. With you and your husband nearly broke, you’re sailing to America aboard the SS Hook in search of a new life. One of you won’t make it. Halfway through the trip, you shove your husband overboard into the icy waters below.

This, is Overboard! A detective game, part visual novel, and part detective game, it puts a twist on a familiar genre. Usually in these games you’re the detective, trying to figure out who committed a crime and bring them to justice. Here, however, you know from the very start what happened. You did it, after all. So instead, you’re trying to escape that justice, and maybe set your new life up to start comfortably. 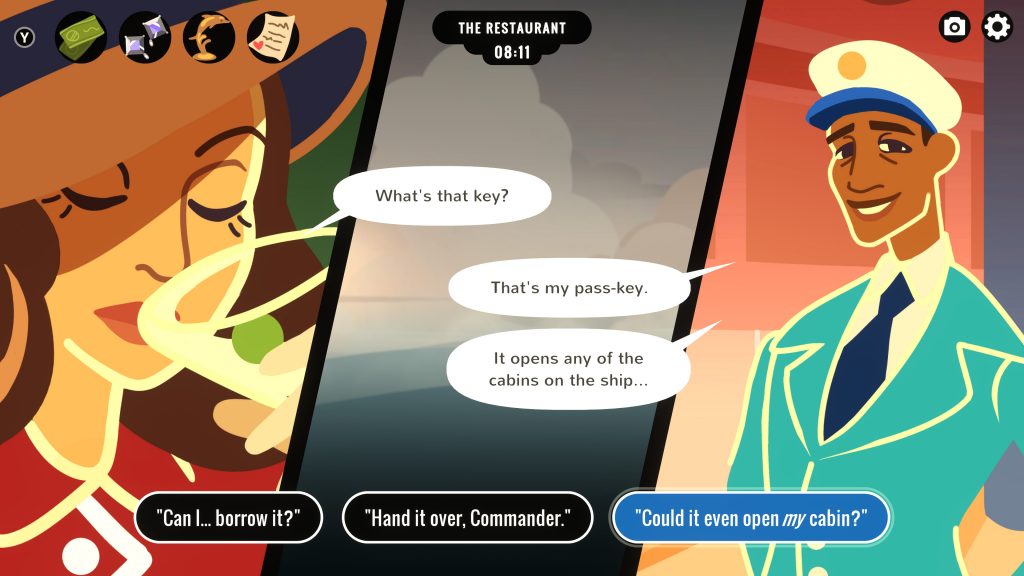 The game proper starts the morning after the crime. Only eight hours from freedom, you still have to get away with what you did. Of course, that’s easier said than done. With only a small group aboard your ship, having spent weeks getting to know each other, your husband’s disappearance won’t go unnoticed for long. On a ship this small as well, what are the odds that you managed to shove a grown man over a railing without someone noticing something?

Crucial decisions start immediately. Should you let the Steward into your room in the morning? He’ll certainly notice your husband isn’t there so early. Yet if you don’t let him in, will that make him suspicious? If you let him in, do you pretend like you saw your husband this morning and he’s already left? Or do you claim to have not seen him since the night before? The choices you make, even in the very beginning, will impact the entire game. 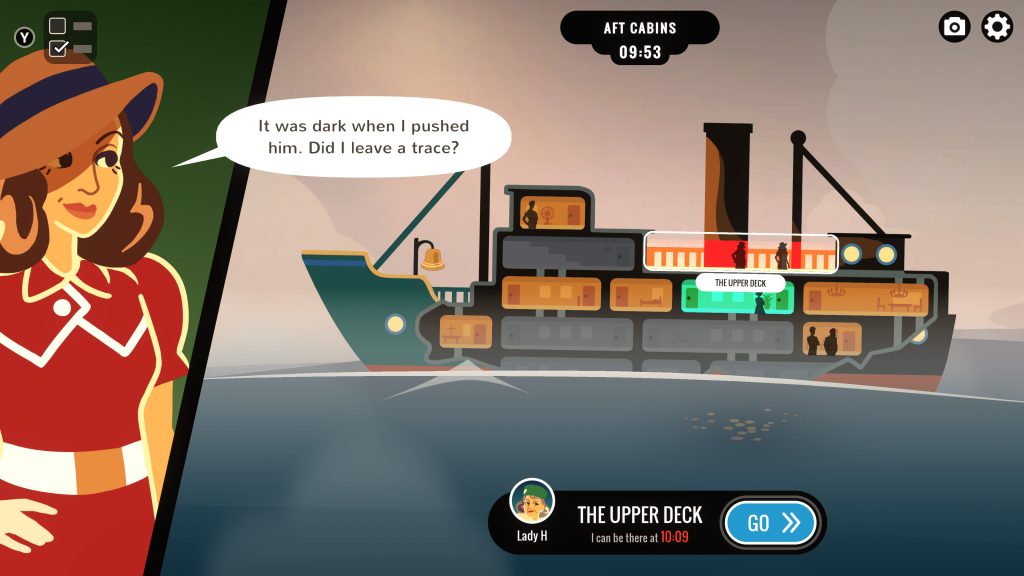 The SS Hook has nine areas for you to explore and interact with others onboard. The ship’s Captain, a wealthy heiress, a gambler, a retired Sikh General, a young lady who was a little too close to your husband, and more all roam the ship. They each start out with certain knowledge, while other things they may discover both due to your inaction, or even due to your inaction. You’ll need to manipulate them, both through action and word, into either not discovering what you did, or at least into not revealing it.

A full run through Overboard! takes only around forty-five minutes. Sometimes less. Sometimes much less. Don’t think you’ll be done at that point, though. Your early runs are very likely to end with you in handcuffs, heading toward a new life far from what you imagined.

Don’t despair. That’s completely intentional. Each time you end the game with less than the desired outcome, you’ll start a new run. Some information from your most recent run even carries over, allowing you to skip certain steps. This is useful because you are on a clock. Every action, conversation, moment you stand around, time is ticking towards reaching America. It’s also, however, another moment that the evidence of your crime is working against you.

Perhaps In The Smoking Room! 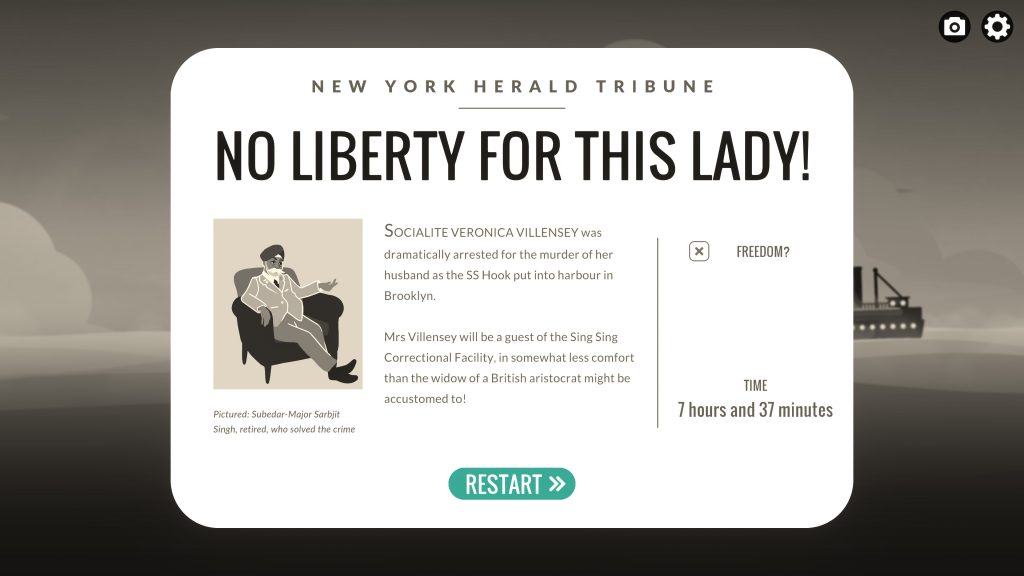 Overboard! does a great job of helping you figure things out. A series of objectives will be given to you throughout your runs, giving you hints at the sort of things you should be trying to uncover. What are those papers a certain character was so intent on hiding? What was another character referring to regarding a secret? Did yet another character see something last night? They’re vague and won’t uncover the details you need. You’ll have to do that. They tell you where you might best spend your limited time, however.

One wrong move can doom you. Yet, there’s not one path to success here. Each character acts in their own unique way, remembering details and even acting based upon them. Your choices matter, consistency matters. Yet sometimes, the best way to figure out something is to go against what you normally would. Worst case scenario, you might learn something that helps you in another run.

Through multiple playthroughs, you’ll get to know this cast well, including Veronica. She’s a fascinating protagonist in that we rarely get to play as a murderer who fully understands what she’s done and doesn’t regret it. Veronica is no sociopath. She cares about certain people and understands the seriousness of what she’s done. Yet she definitely had her reasons, and it’s very hard to dislike her. She’s smart, cunning, charming, funny. Those are good descriptions of Overboard! as well. It shouldn’t be surprising coming from the team behind 80 Days, but the writing here is consistently great. As are the music and the look of it as well, but don’t spend too long standing around admiring them. You need to keep moving.

Even with multiple goals to accomplish, secrets to uncover, and potential endings to see, Overboard! isn’t going to last you months. This is a relatively short game. You might run through it thirty times, but many of those will take ten to fifteen minutes. Others might take thirty minutes to an hour on the long end, but this is an appetizer, the sort of game to be savored over a long weekend rather than obsessed over for months. That’s not a slight. That weekend will be filled with fascinating twists, especially considering you know from the very start what actually happened. Overboard! is a wonderful voyage, well worth your time. Just make sure you don’t go over the rail yourself.

Full disclosure: This review is based on a retail copy of Overboard! 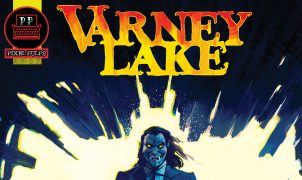