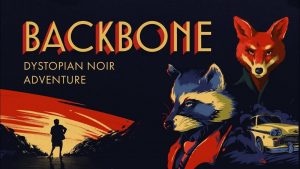 One of the first rules of noir is that things are never as simple as they seem. A philandering husband whose wife needs evidence of his escapades. Seems like an easy case. Of course, things aren’t that simple. They never are. Backbone ends up being a very different thing than you expect going in. Its early hours show a great deal of promise. It ends up being about a great deal more than it lets on in the early going. The problem though, is that what it turns into never really comes together.

You play as Howard Lotor, a raccoon private investigator living in a futuristic version of Vancouver. At some point apparently the world went to hell and now the animals have inherited the Earth. Anthropomorphized animals to be exact, as they all stand on two feet, talk, and live in a fairly human society. A giant wall around the city keeps everyone in, and according to the apes who rule Vancouver, keeps everyone safe.

The society of this Vancouver is built from the ground up around species, or race if we’re going to cut through the metaphor. Apes rule the world. Bears and lions are on top of the societal food chain. Creatures like raccoons, rabbits, and rats live almost in another world. While no law stops them from rising in life, the deck is stacked heavily against them. Most of them work blue-collar jobs, just trying to get by. 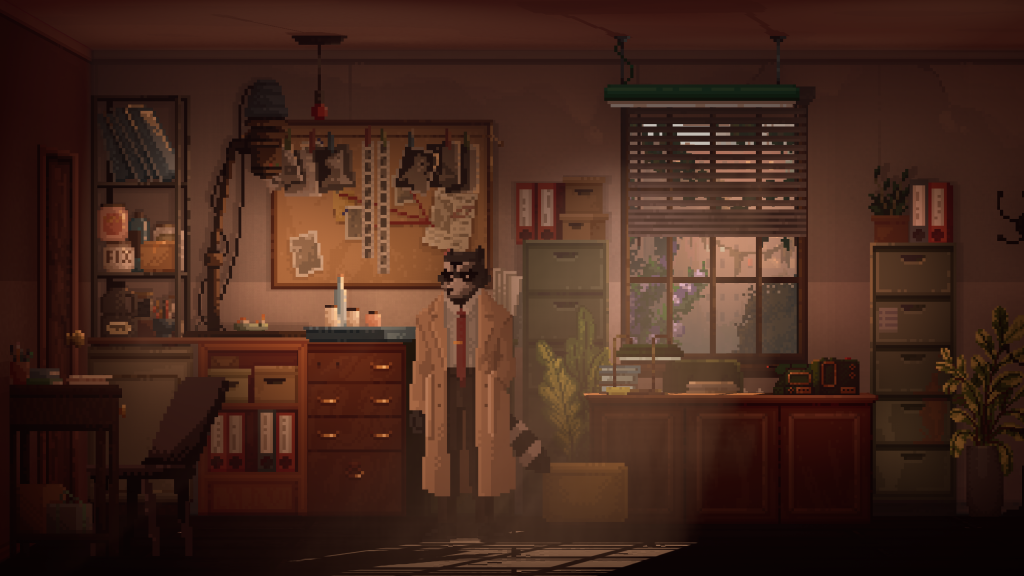 That was never the life for Howard, which is why he got into the PI game. It’s also why he’s sitting in his messy apartment when the aforementioned wife shows up needing help to catch her husband. She sends you off to search for him with only the faintest clue as to where to find him. The job quickly takes you to an exclusive night club called The Bite, run by the current head of the Bloodworth crime family, Clarissa Bloodworth. The disturbing facts you discover hidden beneath the club’s glamorous façade start you on an adventure. You’ll quickly team up with a fox writer named Renee and together you start looking into a conspiracy that seems to go all the way to the top.

The early hours of Backbone play a lot like you would expect a noir styled point and click to. There’s a lot of sneaking around, staying out of sight, using environmental clues to progress. Some of the puzzles are actually pretty clever, though rarely deep. The characters are interesting, even if the message they’re trying to get across never fully comes together. Several elements of the story actively undermine its metaphor and make it feel hollow. Themes of class, gender, entire political ideologies end up layered on top of it. It’s a lot for a game which can be completed in about four hours to handle and it ends up throwing too much at the board for much to stick. 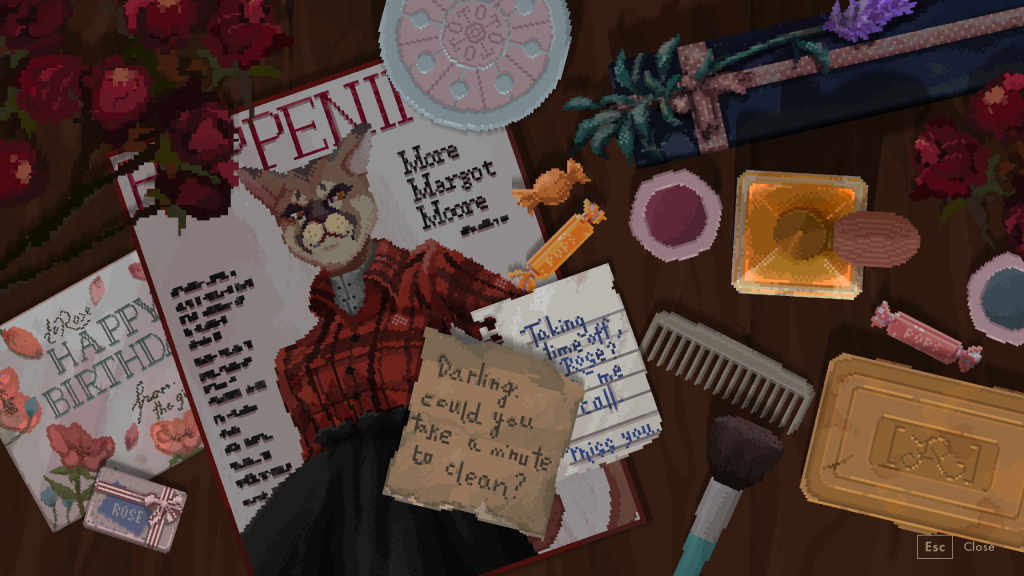 It quickly becomes hard to miss however that what the game started as is slipping away. You’ll suddenly go an hour without a single puzzle. Conversations seem interesting, with layers of dialogue options which allow you to give Howard the personality you want. Even this has severe limits though. None of these choices seem to impact the outcome. Being polite or being a jerk leaves you in the same spot. That could work, if the game were somehow commenting on how fate is inevitable, but that never really feels like the case. It just feels like an underdeveloped system.

As the game morphs, Backbone becomes more of a visual novel, practically playing itself. It actually took me a minute to remember how to crouch in a later section, because the game had gone so long without me having to use the option at all. A point comes where Backbone throws aside its pretense of being a detective game entirely. It becomes something else, something altogether weirder. I love a good twist, and initially I was open to this new direction despite the leap it was making. Before I could even fully wrap my head around it, however, the game is over. 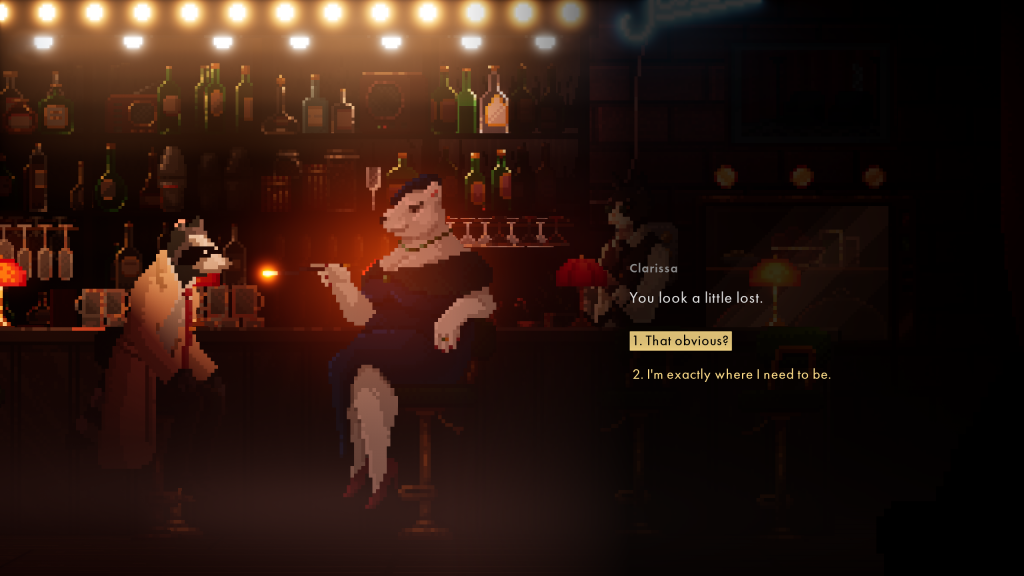 Later sections of the game feel unfinished. Perhaps they were. That a five-act game packs around three quarters of its content into the first two acts doesn’t feel like a plan so much as something gone wrong. The game is still throwing new themes and ideas at you as it wraps up, leaving no time to say anything about them, let alone to provide any sort of closure. The final act feels more like a set up for the second half of the game than an ending. Perhaps there’s more to come, but if this is simply a part one, it would be useful if the development team communicated that.

At least Backbone never looks or sounds anything less than fantastic. Some of the best pixel art I’ve seen in years, the look of it is stunning. It perfectly evokes the noir feel they’re going for. There are moments in this game I’d hang on my wall if I liked it a little more. The soundtrack perfectly sets the mood, with great jazz music almost making you forget the game’s problems. There were times I put my controller down and just took it in. They were perhaps my favorite time I spent with Backbone. Even if you don’t play this game, I would highly recommend checking out its soundtrack on Spotify. I may not hear a better one this year.

Backbone gets off to a great start and it definitely has a lot to say. Great visuals and a stunning soundtrack made me want to give it the benefit of the doubt, to ignore its issues. As it goes on though, Backbone loses everything that made it interesting in its early hours. What replaces it is so different that its hardly even the same game. Different doesn’t have to mean bad, but the changes and ideas thrown around in the second half are too underdeveloped to overlook. Perhaps a sequel can allow the development team to further delve into its many themes. I liked enough of Backbone that for most of its running time I was enjoying myself. In its current state though, it’s hard to enthusiastically recommend.

Full disclosure: This review is based on a retail copy of Backbone. 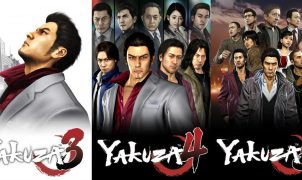 Triple Trouble for Kazuma     Middle age is often a time when one slows down and adopts a more ponderous attitude to life; sipping wine instead of swilling…