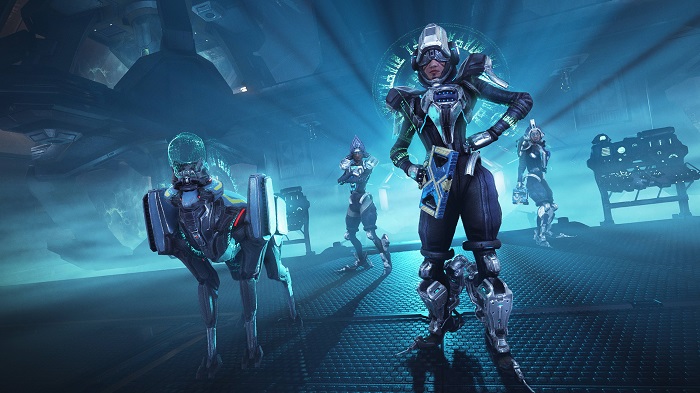 Greetings Tenno, we’ve received a wonderful Sisters of Parvos trailer and newspage update showing off the latest Corpus shenaniganry, some new toys to play with, and Warframe’s adorable new wave-riding ‘frame. We’ll be covering what’s shown up in the trailer and the newspage Digital Extremes has accompanying it for some supplementary information.

First and foremost is checking out a returning face in the trailer:

The opening shot is of Parvos Granum himself, narrating how he always thought he should’ve had a sister. Well, if the ending shot from the Call of the Tempestarii is any indication, he got his wish. Because after taking Vala in, he’s decided to make his own Lich system called the Sisters of Parvos, an elite, state-of-the-art Corpus squad of high-powered hitwomen. You’ll need to be at least Rank 1 in the Granum Void before you’ll start seeing the Sister Candidates show up on Corpus ship tilesets. Beat up their Hounds and you can claim their companions before claiming the Sisters’ lives next. Should you opt to spare them, though, you can get on-call support and a possible Railjack crew-member!

Speaking of the Lich system, we are gonna see some major changes to that one. The Murmur system is now drastically sped up. There’s a new wildcard Requiem Mod that drops from Liches which will count as a known Requiem for any spot on your Parazon, and you can now get Requiem Ultimatums which let you call out that Lich that just won’t show up in your missions for a duel on any influence node. 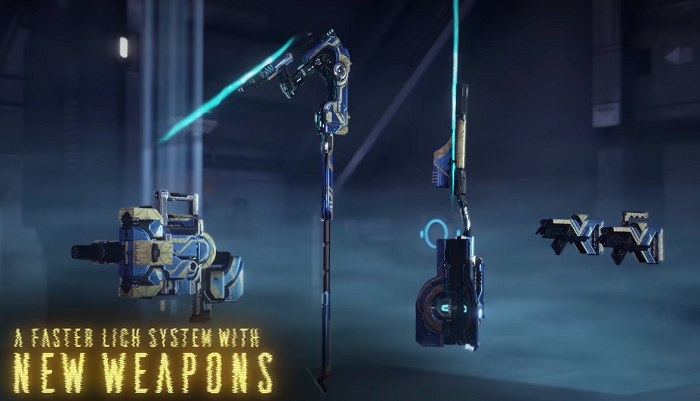 The one thing I just can’t get enough of watching is the fold-out weapons the Corpus have. With the handles at the top and the container-shaped design, they just scream that classic Corpus killer-businessman style, taking hints from real gun concepts like Magpul’s FMG-9 and the ARES FMG that was even toted as the “businessman’s personal defense weapon”. That idea of a fold-out briefcase gun has been around long enough for games to cash in on the neat-o trick and now Warframe is joining the club. The Newspage gives updates on how to get these weapons, some of them being drops from the Sisters of Parvos and some of them being rewards for fishing Corrupted Holokeys out of the Void Storms.

Some of the new Corpus weapons available from the Sisters of Parvos are as follows:

The melee weapons from the Corrupted Holokeys and are as follows:

Lastly, there’s three new Kuva weapons for the Kuva Liches that they can drop: 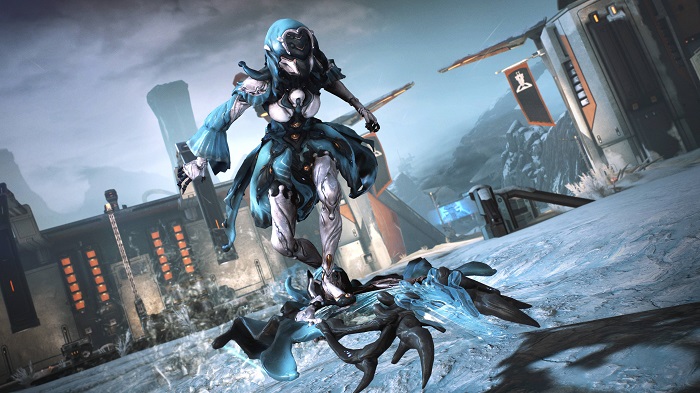 And now for the moment we’ve been waiting for, the new Warframe, Yareli! We’ve had Hydroid before for watery support, but Yareli’s taking a spin on the surfer chick style with her unique K-Drive, the Merulina. The trailer shows her using the Merulina, as well as her first ability, Sea Snares, that traps and damage enemies. Later on she uses her fourth ability, Riptide, which makes a water tornado that’ll increase in damage the more people that get sucked in. The only one of the bunch we don’t see from the trailer is her third ability, Aquablades, which giver her three orbiting blades of water that’ll damage anyone that approaches.

You’ll be able to get her by completing a little quest featuring her own little comic series, then making her parts through a new Dojo room to research in. In case you’re wondering, the newspage has her passive listed as a 100% critical chance buff for secondary weapons as long as she’s been moving for longer than a second and a half. For those wanting to pick her up right from the start, you can get the full bundle including her frame, Merulina Syndana, Merulina Drone, and her Kompressor pistol, as well as some other goodies like XP Boosters and Credit boosters. 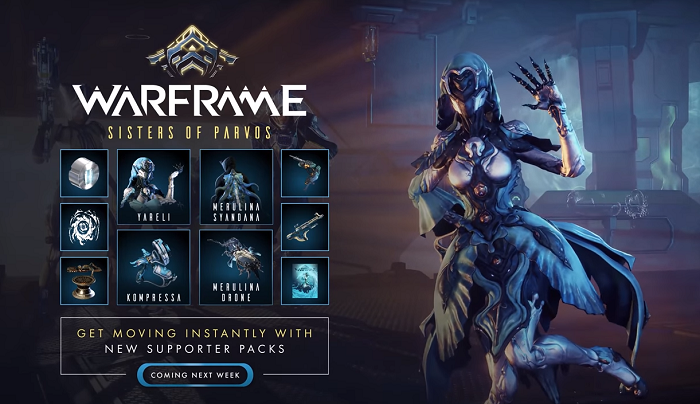 For a couple other tidbits, we’re getting Syndicate exclusive armors and emotes, so you can show your faction flair any time you want. We’ll also be seeing Ember’s new Pyraxis skin, as well as a new helmet for Harrow called Crucis. The Parazon will be getting eight new mods as well, getting some changes for ease-of-use when doing mercy kills. Melee weapon mods are also getting some nerfs so that primary and secondary weapons might see more use, as well as offering new Galvanized mods to boost the primary and secondary weapons. You can find more info on those here, in the Sisters of Parvos Developer Workshop video. Lastly, are you concerned your Kubrow or Kavat is getting far too up there in age for combat, but you just can’t bring yourself to put the old girl down? You can now Regress Genetic Aging for your favorite companions, and, even better, the DNA Stability and Loyalty degradation systems are completely gone, so no more worrying about your companion leaving you or being reduced to a flesh puddle of incoherent DNA!

The Helminth system will also be receiving a few more perks for your frames, as listed here:

There’s also Tennogen Round 20 up on the forums, featuring skins for Octavia, Atlas, Baruuk, and Khora, so feel free to check that out here.

This big update for Warframe drops July the 6th, so stay tuned and let us know what you think of the new content in the comments below! Stay hydrated Tenno. This is Cory from HPP, signing off!

A shiny new adventure awaits! Without dwelling on it too much, picture in your head a robot. Now, because of pop culture in media and video games, there’s a…