Paradox Error Review: A Sinister Glitch in the System 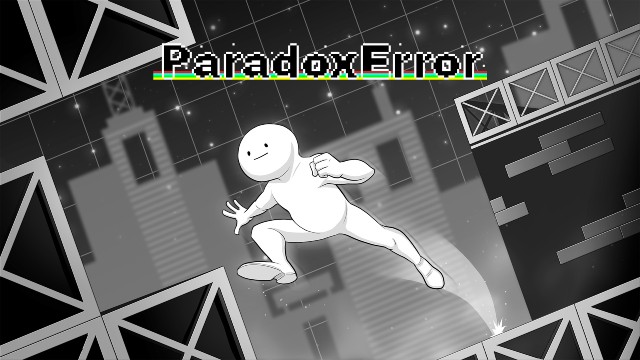 Rules are meant to be broken, and so are walls, especially the fourth wall. Not breaking walls is just so passé. As an editor, I have, shall we say, an aggressive opinion about when it’s appropriate to break the fourth wall. I’m old-fashioned like that. Paradox Error is unabashed about its fourth wall–breaking design, but much like with literature, such usage must be controlled, tempered, and appropriate. Otherwise, chaos and tedium, a paradox itself, will consume the work.

At its core, Paradox Error is just a side- and vertical-scrolling platformer. You run, jump, and look for the red, rectangular block that represents the exit. There are no enemies to defeat. There is no time limit. There are no checkpoints or lives. The only threat is the environment: spikes, spiky objects, and a variety of aggressive glitches. You can also fall off the screen. Whenever you die, you respawn at the game’s title screen to give it another go.

Is This Déjà Vu? 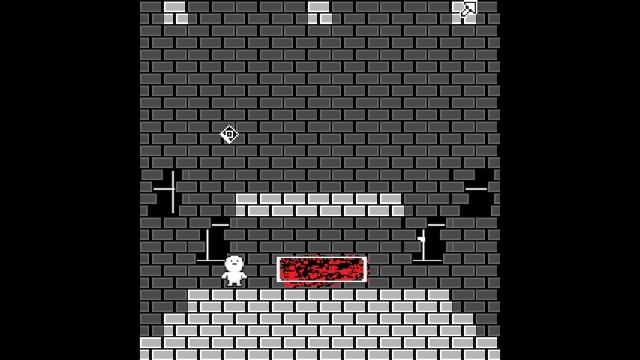 Each level is slightly different than the last. Mechanics change in subtle ways. Your character’s jump might be higher. There might be switches. You might get chased by a wall of spikes or pursued by a bloodthirsty pixel blob. You might control gravity. You might have to deal with all of those at the same time. This would be a boon for the game’s design if not for several serious flaws that derail the entire experience.

Despite the variety of mechanical changes, Paradox Error’s level design is tedious. The levels can be separated into two categories: sprawling and forced scrolling. The sprawling levels are like mazes. There are countless dead ends, and all you can do is keep searching until you find the end. These levels also require leaps of faith. You must frequently jump into chasms that are littered with spikes, and there’s no way to know where they are until you land on them. As I mentioned, Paradox Error doesn’t have any enemies, so there’s nothing to break up the monotony of just…walking and jumping and trying to avoid a spiky death while looking for the exit.

In the forced scrolling levels, you’ll do your best to keep your distance from a spiky and/or glitchy wall. This seems like it would be more exciting, but it suffers from a tedium problem as well. These levels also frequently require leaps of faith. Worse, there are paths that are dead ends, and there’s no way to know until you get trapped in one and get crushed to death. You’ll get to repeat the level again and again until you figure out the exact path you need to take. 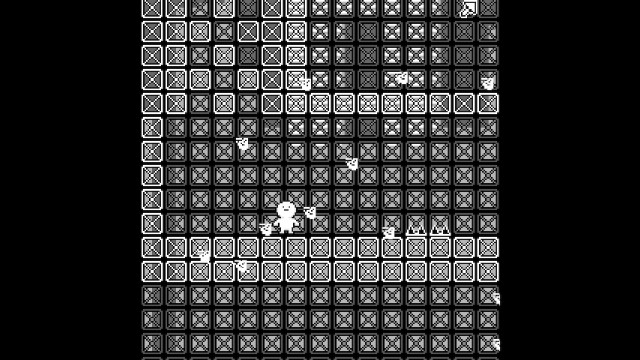 In both instances, a key aspect of the design is perfection. There isn’t anything especially challenging about the designs themselves. It’s just a matter of knowing when to jump and what path to take. The design doesn’t demand dexterity; it mostly requires memorization. Death is instantaneous, so if you’re even a pixel off a jump and you die for whatever reason, that means repeating the entire level. This is when the tedium really starts to set in.

Paradox Error’s marketing says that players will “use UI elements and game-breaking bugs to [their] advantage!” That’s kind of true, but it does little to alleviate the design’s monotony. For example, in several levels, you’ll use the game’s icons (New Game, Load Game, Options) as platforms to avoid obstacles. It isn’t any different than riding moving blocks in a Mario game. In another level, a glitch swaps your character with one of those icons, and you use that to navigate the level instead. Every other aspect of the design is still identical. These kinds of glitches are presented as evolving, game-breaking glitches, but they’re just a reskinned version of what you’ve done in any other platformer.

The same is true of the invisible wind currents that push you upward and the ability to switch gravity on the fly. These could be considered glitches, but it’s never apparent what kind of game Paradox Error is supposed to be before it breaks. It begins glitching in the first level, so every “glitch,” every change, just feels like something that’s supposed to happen. The pixelated blob glitches that pursue you feel like any other entity that’s ever done exactly that. 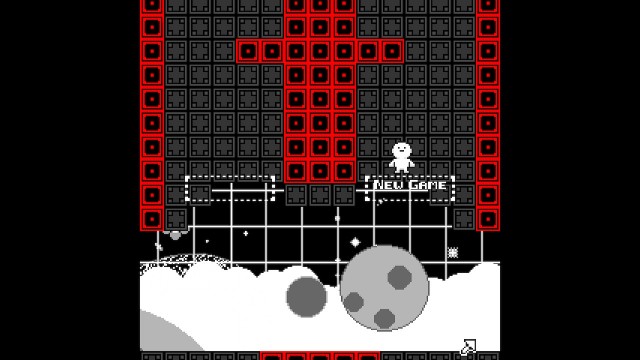 Paradox Error’s minimalistic presentation is inviting until you start moving. For whatever reason, different parts of the background layers scroll at different rates and in different directions. This is in addition to the natural scrolling that occurs as you move and jump. My eyes struggled to focus on any one part of the screen because every element seems to move when you move. I had to take regular breaks from the game because it kept giving me a headache.

The game’s limited soundtrack and sound effects fit the aesthetic, but the same song plays for almost the entire game. It constantly loops. It gets slightly remixed as you progress, but it doesn’t take long for it to wear out its welcome. It also inexplicably seems to just stop playing at times. There are entire levels that are silent aside from the sound of you jumping and exploding when you die.

In addition to all the scrolling, there are also visual glitches. These glitches artificially inflate the game’s difficulty by making it even more difficult to look at the game. On one level that appears to be snowing, the snow blurs whenever you move. In another level, the pixelated blocks in the environment spawn more blocks that create a level-wide smearing effect. This effect gets worse the longer you move. The stop-and-go gameplay this necessitates slows Paradox Error’s already slow gameplay down even more.

The aggressive blob glitches also have a visual component. The closer it gets to you, the more glitched and scrambled the screen becomes. You need to stay at the far edge of the screen if you want to negate this scrambling effect, but this prevents you from anticipating environmental hazards. The result is, of course, plenty of unnecessary deaths. 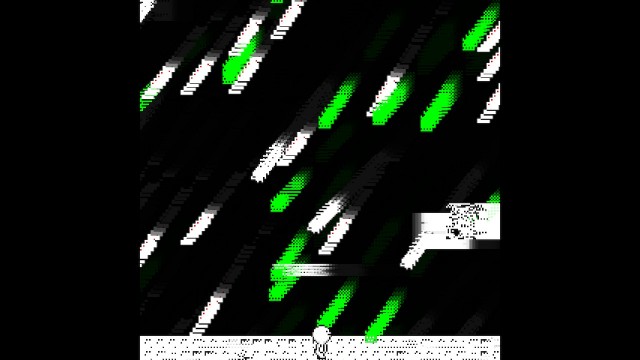 There are a few levels that switch to a top-down viewpoint, but all the same, flaws are still present. These levels are sprawling mazes. You occasionally get to push buttons to open doors, but you mostly just wander around until you pick the right path. Some of these levels have sections that repeat if you pick the wrong pathway. It is exactly as exciting as it sounds. You typically encounter a person at the end of these levels who then shares with you the game’s disjointed and obtuse narrative. It’s something about a computer program coming to life and killing its creator, I think, but the whole thing is severely underbaked. I’m not sure how a program managed to accomplish such a feat, but perhaps it was due to sheer boredom. You’d think a sentient glitch would have grander aspirations.

Paradox Error also inexplicably includes an onscreen pointer you can use to interact with the game. At least, you’d think so anyway. I used it exactly twice. Once to start the game and again to drag my character through a maze-like level during a glitch. This feature apparently exists only to reinforce the game’s fourth-wall-breaking design. I was never able to get it to do anything else. 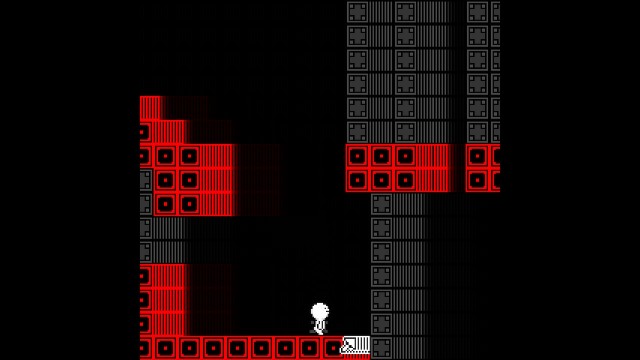 It’s not quite paradoxical, but a few (hopefully) unintentional glitches further mar the experience. I frequently became stuck in walls or the edge of the screen whenever I had to ride an air current or switch gravity. This glitch is especially devastating in the forced scrolling levels. Any delay in these levels can get you killed, and getting stuck in the environment is a sure-fire way to die. In one early level, I couldn’t avoid getting stuck in the environment, and after trying it for half an hour, I gave up and turned it off. That’s when I discovered the game doesn’t save. Yes, that “Load Game” option on the screen is purely ornamental.

The other glitch occurred when I beat a level, and the game froze. I had to reset it and play everything I had just played again. I didn’t get stuck in the walls in that level when I played it again, but I did later in the gravity levels. Even if these issues didn’t exist, the lack of a save function is unacceptable. The game doesn’t even let you take an actual break from it; I don’t count the Switch’s sleep mode as a break.

Paradox Error is so concerned with crafting a meta, fourth-wall-breaking experience that it completely neglects the platformer genre’s fundamentals. It is as dull as it is frustrating. Aspects of its design are unnecessarily hostile to the player. There are thousands, if not tens of thousands, of better platformers out there. Aside from a morbid curiosity, there’s little reason to suffer through this one.