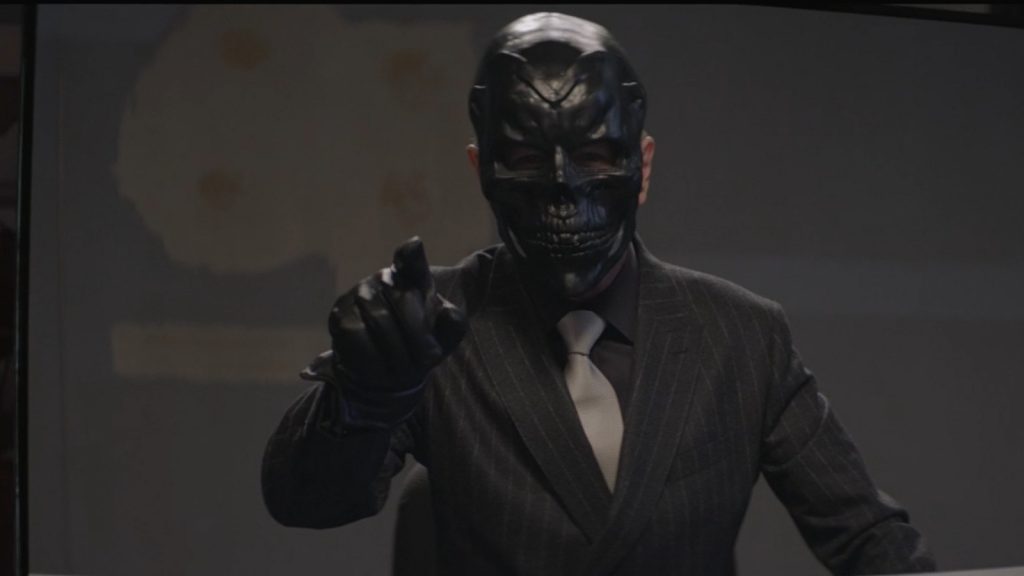 Well, I pretty much deduced properly last week that the season finale of Batwoman wasn’t going to be as good as the previous episode. But in fairness, it had a lot to live up to. And while there were some great moments, there were also too many frayed plot threads or poorly developed moments. For example, Black Mask getting his hands on trophies from Batman’s iconic villains had the potential to lead to something truly cataclysmic. Instead, he tried and seemingly failed to make a super soldier, and literally tossed them in a dumpster. Additionally, we know last week Alice used Safiyah’s Desert Rose dagger to knock her out. But then we never saw hide nor hair of the brunette villain this week. It’s that sort of inconsistency that kept Power from being a truly amazing episode.

The episode started with Black Mask doing his usual bombastic villain schtick and broadcasting to all of Gotham. He calls himself an altruist, and talks at length about how broken and corrupt Gotham was (which admittedly is true). Then he went on to hand out skull masks reminiscent of his own, and encouraged everyone to put one on and be a vigilante. Topple the aristocracy, etc. And then he says power needs to used or lost, and suddenly all the lights go out in Gotham.

Meanwhile Circe is getting dressed in a truly horrifying version of the Batsuit, crowned with a fierce skull mask. It’s a good look and all, and it matches how dangerous she is. Just a shame we didn’t get to see it very clearly during the episode. As she gets kitted out, Ryan is writing a letter to Gotham city. She says how much she loved being Batwoman, but that perhaps she’s not the hero the city needed. Mary heads to her clinic in preparation for the madness Roman is brewing, but first Luke passes everyone walkie talkies. That way, they can still communicate even though all the electricity is off in the city.

Luke struggles to get a bead on Black Mask’s location with only a bit of juice in his monitor, when Ryan finds a solution. She notices a reflection off Roman’s mask, and makes out a studio number. At the studio itself, Black Mask and Circe are ushering Tavaroff into villainhood. They’re using a mix of Venom and Snakebite to mitigate the roid rage side effects.

Was Black Mask Not Scary Enough? 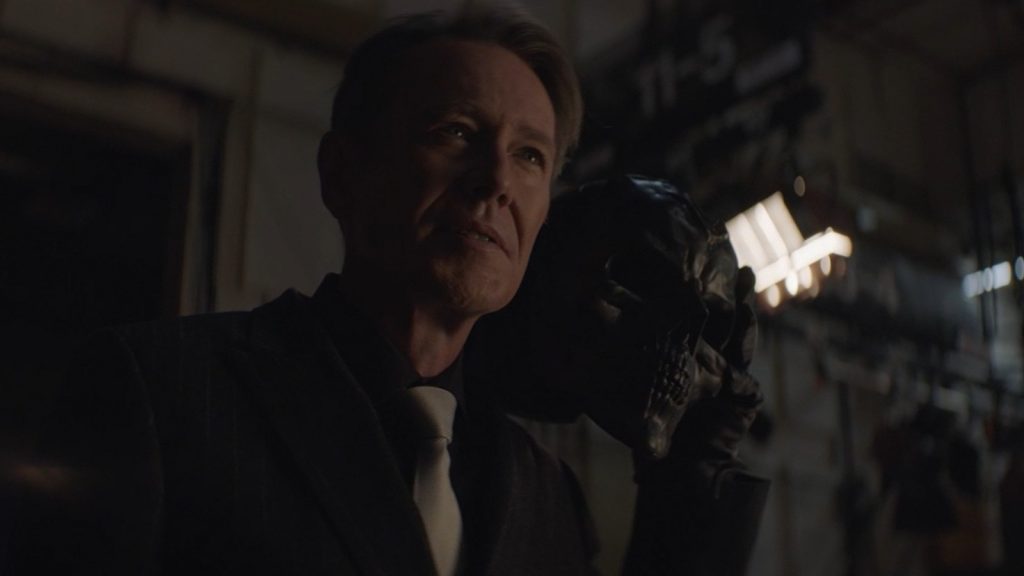 As they wait, Mask waxes poetic about how his plan is to bring Gotham to its knees first. Then, he’ll force someone else to wear his mask, kill them and be crowned as the savior of Gotham. Then they’ll just “remove” the mayor and transform the city according to his whims. Unfortunately for him, things quickly start to go wrong. Tavaroff doesn’t seem to be accepting the drug cocktail, and is flatlining. So, like any good boss, Roman tells his minions to toss him in a dumpster. And even though Tavaroff definitely deserves it, it struck me as kind of spontaneous and unbelievable for Roman to give up on his super soldier plan so quickly.

Ryan is still suffering from lacking self confidence. She doesn’t feel she’s lived up to the Bat mantle. Sophie tries to convince her otherwise, and says she’s the woman for the job with or without the suit. Then crazy pants Alice arrives looking for Kate, moments before Gotham starts to go full Purge. Masked idiots are breaking things and hurting people. The ladies pull a man out of his car, and it turns out to be Mayor Atkins. He’s been shot and in bad shape. Ryan tells Sophie to call for help via her walkie, and that she may have a plan to deal with Circe. Her and Alice are going to wear the masks Roman has been spreading through the city to infiltrate his base and take Circe / Kate back.

One really fun development involves Luke. He’s going through his dad’s stuff and trips over old drawings of a Bat Suit he imagined as a kid. He finds one of the drawings has his father’s notes on it. It looks like Lucius was making Luke’s suit a reality. Then Luke finds it covered with a tarp, and it’s powered and ready to go. He can now become the hero Batwing!

Tavaroff gets wheeled into Mary’s clinic after they find him in a dumpster. Apparently the Snakebite dose in his suite gets atomized so the hit from Venom is less devastating, and the victim stays in a loop of pleasant memories. Mary realizes something, disengages the Snakebite atomizer, and runs off. Alice and Ryan talk, and the criminal says she understands why Ryan hates her. Shockingly, blondie tries to apologize, but Ryan says that she doesn’t deserve forgiveness. They argue, and Alice lashes out. Says Ryan doesn’t feel worthy, and that’s why she’s so eager to save Kate. Furthermore, Alice reveals she’s looked into Ryan, and knows about how her biological mother died in childbirth. Then she cruelly asks Ryan how it felt to kill the first woman she met, and if she’s worthy of being a hero. 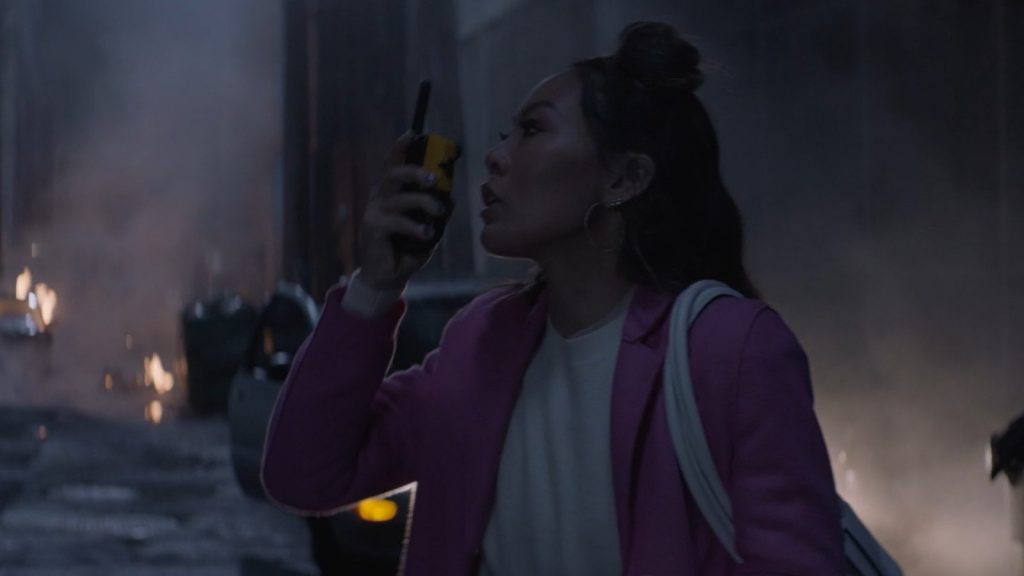 Mary steps outside the clinic to run an idea by Luke right as Tavaroff comes back to life and goes full Bane. Mary thinks they can use the atomized dose of Snakebite to safely restore Kate’s memories. Then Tavaroff comes barreling outside, frantically looking for his Snakebite. The now hulking brute chases Mary up several flights of stairs, up to the roof. He grabs the Snakebite and tosses her to her death. Luckily, it’s Batwing to the rescue. Luke in his new suit catches her in midair and they safely land. Then he promptly punches Tavaroff’s lights out, which was very, very satisfying to watch.

Alice and Ryan reach the studio, and are about to confiscate the stolen weapons from the Bat Cave when Circe attacks. Both Alice and Ryan fight her, and it’s going okay until Black Mask starts shooting. They find cover, and Circe escapes, with Ryan hot on her heels. And then Vesper is on the horn reading Batwoman’s letter to the masses. Saying how the citizens need to find their own strength to fight against hate. As proof of their new purpose, many citizens start turning Roman’s masks into impromptu Bat Signals, since the main one was thrown off the roof of GCPD.

Roman has Alice at his mercy, and starts telling her why she failed as a villain. How it’s confusing to be a villain and have feelings. To both fight against Batwoman and try and protect Kate. Alice quips he’s one to talk about confusing, given his dual identity. He says one is to scare the city, and the other to reassure it. Then Alice says that Joker was a great villain, before using his acid boutonnière to spray Roman’s face. Then she mocks him, saying “good luck with your plan now”.

Ryan finally tracks down Circe again, and there’s a fun chase sequence. It involves Ryan in the Batmobile versus Circe on the Bat Bike. There’s missiles, spike traps and all sorts of fun gadgets. But Ryan’s trusty grapple finally knocks Circe off her stride. Then they commence fisticuffs, and Ryan screams “NOW!”. Alice appears like some deranged magician and sprays the atomized Snakebite into Circe’s face. She doesn’t go down, and manages to grab Alice into the cloud. Then they both fall off the bridge into the water, right before the drug starts kicking in.

Both sisters have visions. Alice’s of course involve the slain Ocean. The phantom tells her this is goodbye and to chase the positive feelings he brought out in her. Circe / Kate finally gets released from her mental prison, by none other than sister Beth. Alice wakes up first, and drags her sister above water. But she’s not breathing, and so Ryan and Alice help with CPR. Finally Kate wakes up, sees Alice, and says “Beth”. Right before GCPD arrive and drag Alice away.

You Don’t Need the Suit To Be Batwoman 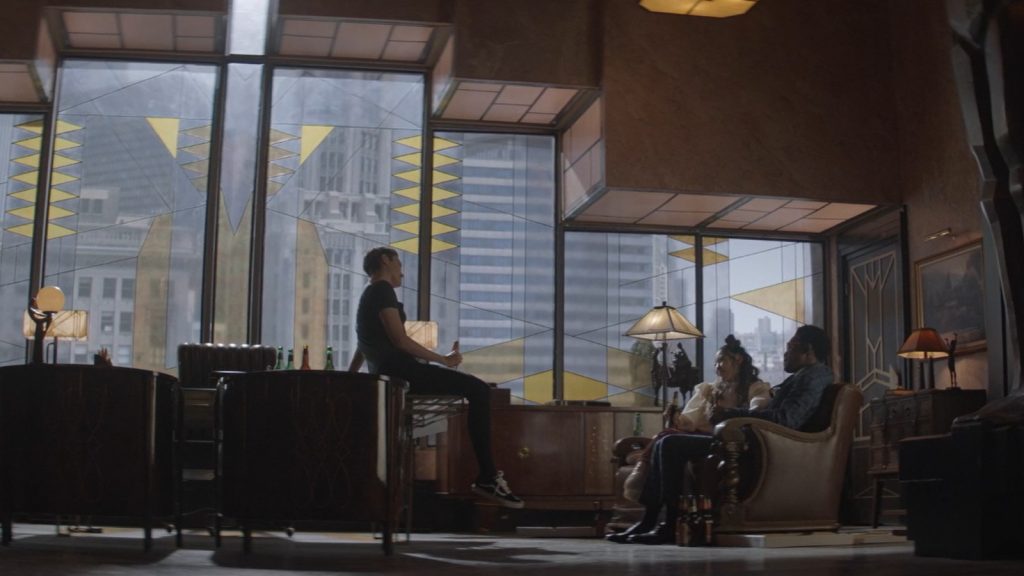 Though we never see her face, Vesper has a triumphant broadcast. About the strength of the citizens of Gotham. How they stood up to Black Mask and stayed sane. Then she briefly mentions how both the leaders of False Face and Wonderland gangs are headed to Arkham. Ryan is brought before her parole board. They ask if she’s changed. First she says no, that she’s still the good person she was before being wrongfully convicted. Then she gives the answer they want. She has changed, by not seeing herself the way they did, and finding her own power. She finally gets released from parole, and is giddy with happiness.

There’s some really fun moments in the end. Luke, Mary and Kate reminisce. Ryan arrives and talks privately with Kate. It’s clear the women have a lot in common, and actually get along pretty well. Kate passes the mantle over officially, and Ryan vows to take care of Mary and Luke, since they’re family now. Kate then visits Sophie at The Hold Up. Says she plans on visiting her dad in prison, and then looking for her cousin Bruce. They realize their timing is never right, and Sophie wishes her well, right before laying a heavy kiss on her old flame. 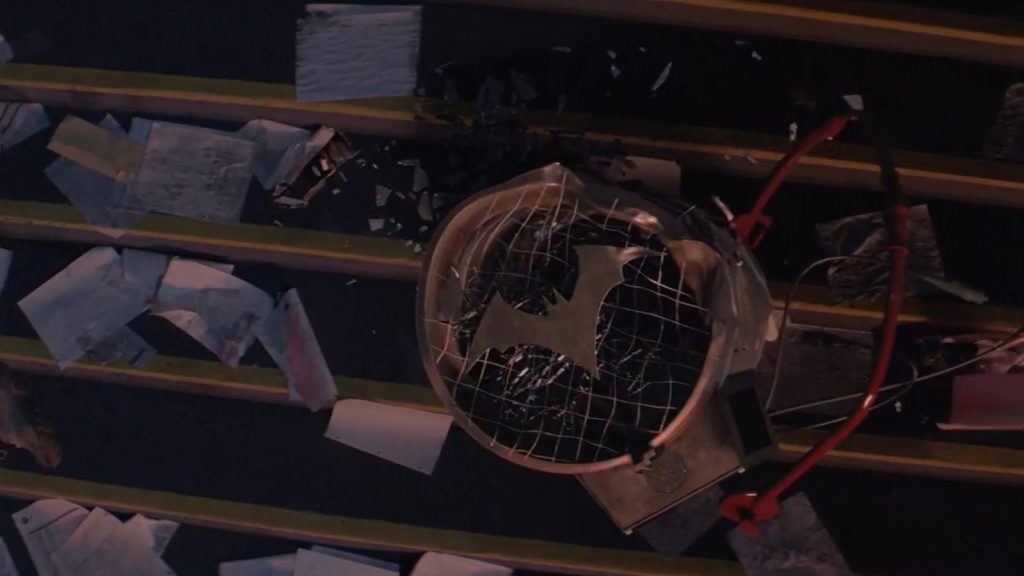 Ryan, Luke and Mary talk future plans, including how they might build the community center atop Mary’s clinic. And Luke now can work in the field as Batwing. Ryan then heads to Arkham and talks with Alice. The young hero says Alice locked up is justice for her mom, and that she never wants to see Alice again. Unfortunately, Alice gets the last word. She mentions that Ryan’s biological mother isn’t dead after all. Lastly, we see the stolen trophies from the Bat Cave wash up on some shore, and Poison Ivy’s vines start growing rampantly. Overall a great second season of Batwoman. Here’s hoping the writers continue to keep things fresh and deftly written in season 3.