Hot Wheels Unleashed Is A Race Down Memory Lane 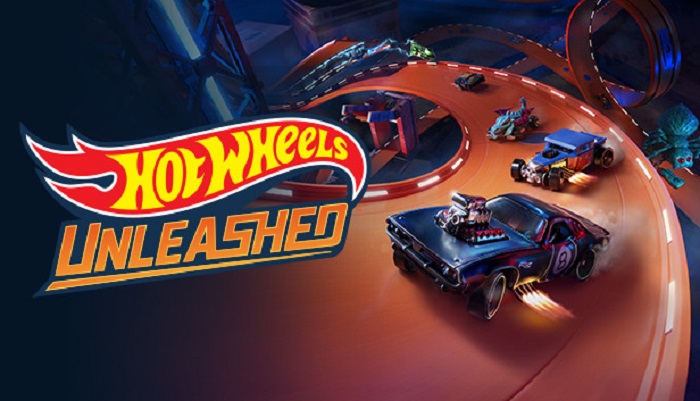 When I saw trailers for Hot Wheels Unleashed, I had to smile the whole time, because it has been for-freakin’-ever since we got a good Hot Wheels game, and to get a chance to dig in to the Beta Preview was music to my ears. Milestone’s got their work cut out for them though, because this is a name with quite a pedigree. These little chrome cars have been around for many, many years. So how do these classics hold up in a digital age? I made sure to test out every corner, every car, and every track to see if my inner child gives the thumbs-up on this tuned-up trip down memory lane. 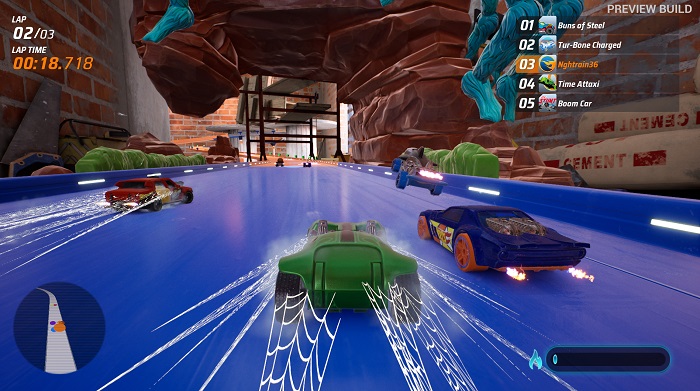 Shaking off the cobwebs has never felt so interactive!

Hot Wheels Unleashed never takes itself too seriously. There are no edgy systems, no do-or-die moments, no cosmetic damage that makes you feel guilty for screwing up. It’s exactly how I’d want a Hot Wheels game to be. Smash into your opponents, slam into corners without fear of scratching the paint, don’t worry about if you had a crappy start, ’cause you can always climb back to 1st, if you even care about being there. Sometimes, just gliding down a halfpipe and taking in the gigantic scenery is enough, making winning the race a secondary objective to just enjoying the hell out of your time on the track.

There’s so much to take a look at, and it all makes a person want to examine the surroundings to see how the environment’s been turned into a high-speed playground. From racing through air ducts to whipping around wire spools, this is exactly how shrinking your raceways should be done. The lighting on this game is perfect, never too dull, never glaring too much, but adding colorfulness to the backdrop and designs.

I would’ve loved to see a few more traps out there, because, while the spider trap was fun and the snake head was neat, that was it for the traps. I can only imagine they’ll have more traps later down the road for the track builder. Still, I’d be especially impressed to see some tracks with unique, track-exclusive gimmicks and traps, like Magma Mouth from the Volcano Shoot-Out set, or maybe incorporate some of the stuff from the Atomix City (which would probably be the most awesome way to do free-roam if that was every to be a thing in the future). 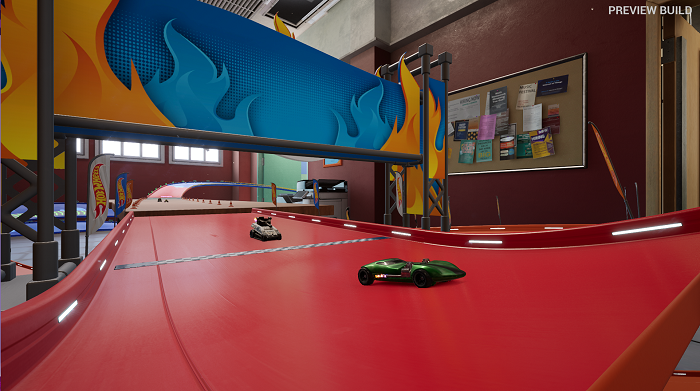 A bit intimidating when the person behind you has a tank cannon on their car.

Alright, let’s talk cars because. After all, that’s why we’re here, right?

The car selection is pretty vast too for just being in a beta branch preview, and I recognized almost all of the cars, from the classic twin-engined Twin Mill to the goofy Street Weiner (though I was wondering where the Hot Seat went, I still have one of those in the package from ’98). There’s a couple that I had questions about, like why Tankinator but no Treadator, which had been around since the ’90s. While I would’ve loved to see some love from other fan-favorites like the World Race or Acceleracers lines right from the get-go, I wouldn’t be surprised if they’re scheduled for the Day 1 lineup. You best believe I’d shell out money for a chance to rip and roar in the Deora II or crank the tunes with Bassline.

That said, there’s gonna be around sixty or more cars on Day 1, so even if you don’t always find your favorites immediately, given time and Milestone’s refusal to do microtransactions, you’ll see the goods coming along eventually.

Also, I think it’s time to take a look at the audio. First of all, the car engine sounds were well designed. Simple, but that’s a given seeing that it’s debatable how some of these things even have engines in the first place. While the sound FX was a bit on the plain side, I do hope that they take some time to adjust pitch and bass on some of the vehicles. Some cars, like Exotique, need a bit more sharpness and raised pitch, while others like Rodger Dodger and Twin Mill need a bit more bass and grumble.

As for the music, some might be a bit put off by the rather…peculiar sounding EDM, being along the lines of Big Beat and Drum ‘n Bass. I kept anticipating hearing some Fatboy Slim or Ed Rush, but what I did hear was pretty catchy and fitting for what the game was going for. The moment I heard it, I was immediately reminded of PS1 racing classics like Rollcage and earlier WipEout games, which is honestly the best thing they could have going for them. It again goes back to that old-school racing vibe the game keeps putting front and center. 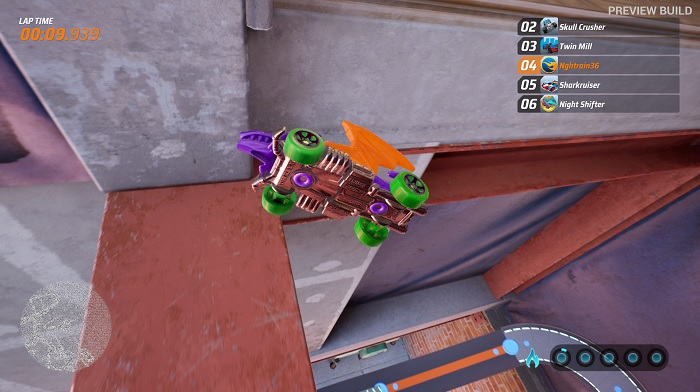 Yeah, I don’t think that’s how dragons are supposed to fly.

To say the ride is without its bumps would be a lie though, but what’s a road without a few potholes? First of all, to say that some of the whips are a bit too squirrely is putting it mildly. You can have, say, Rodger Dodger, which, while it’s weighty and struggles with corners, it never felt too punishing, and felt representative with how I’d expect it to handle.

But get to Dragon Blaster and that thing had an issue with not only oversteering like hell, but a resulting touchiness anytime the car went from airtime to the street. I get just a touch too much air over a speed bump and I’d practically fling myself sideways. A little bit of balance is not uncommon with vehicles, especially as you rise in the ranks of rarity, which is what specifies how powerful a car is. One model, many rarities, many different stat adjustments, so balancing will be needed.

There’s also two different boost types, a drainable gauge and individual spurts of boost. There’s also some way to get the classic headstart by firing up your engine at the start of the race that also varies from car to car, but I honestly never figured out how to trigger some of those. Not sure if there was a bug that prevented me from activating some of them or if I just didn’t understand the mechanics, but it’s something I’d like to see simplified a bit.

Another issue that needs to be addressed is how the rotation of your vehicle midair operates. I was quite confused about what that was even for in the first place. At first, I thought it was used for corrections if you wind up in the air and drifting the wrong way, but it was really slow getting my vehicle to correct in the air with it. That slowness killed off my idea that it might’ve been a trick system that would net me some boost. That motion needs sped up a bit, probably would be best to make the speed of movement multiply over the span of time the direction’s held down so precise movements are kept precise and drastic changes are available for correcting the major goofs.

It would also make it easier for those of us that like making our own shortcuts by skipping track chunks we don’t feel like navigating. Thing is, if you want to do that, you need that precision so you’re facing the right way forward when you land. In the grander scheme of things, I suppose the physics make sense seeing that you’re driving around toy cars, which are weightless and tend to fly off the track at the slightest inconvenience in real life, but there’s a time and place where it’s not gonna hurt any to segregate real life from the game for the sake of keeping frustrations low. 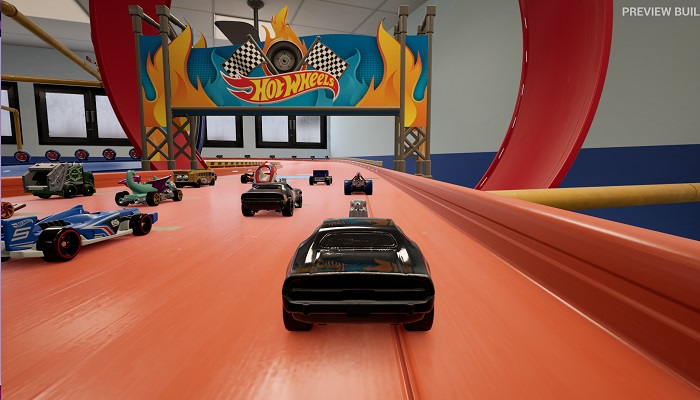 Exactly how you imagined it when you were a kid.

An honest to god callback to the good old days of orange tracks and exotic designs, you can feel the kid-at-heart passion that went into this. It’s a taste of classic times when the only thing you had to worry about was getting your homework done in time so you could get back to playing with your toys before Mom called you down for supper. The tracks, the traps and turns, it’s all blended together in the best way you can do for a racer. I remember when Forza Horizon 3 put out the Hot Wheels expansion and all I could think was “Oh my god, I remember this! I used to have that car!” and those feelings are tenfold on this little racing gem.

There’s already one helluva foundation built here that can only go up, so keep climbing in gears Milestone, you have a long road ahead that you’re sure to dominate. You know what we want, so take your time and make the best of this, and the gold trophy is all yours. The Hot Wheels Unleashed Beta Preview is just a taste of a long-lasting victory to come.

You can check out Hot Wheels: Unleashed by visiting the Steam page here.