If you’ve read any of my previous reviews, you’ll know that I have a special soft spot for deck-builders (see my reviews of Trials of Fire, Neoverse, and Neurodeck). Ever since the release of Slay the Spire, it’s like I can’t get enough of these dang roguelike (or lite) deck-builders. And since it’s been a while since a new one came out, I was more than a little excited to give Roguebook from Abrakam Entertainment. Oh, and did I mention it was co-created by Richard Garfield of Magic: The Gathering fame?

No, Really, it’s an Evil Book 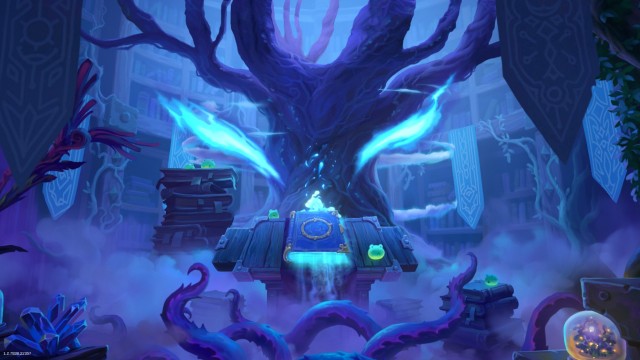 Like most deck-builders I’ve played, it’s fairly light on the story. But that’s okay! Honestly, these games aren’t really built to have deep, engaging narratives. In Roguebook, the story, such as it is, revolves around an ancient chronicle that holds within its pages all the legends of the world. Sadly, this amazing tome was lost. However, after being exposed to magic, the book gained a sentience and will of its own, thus becoming the Roguebook. Trapped within the pages of the malevolent tome, players will need to guide their heroes through several chapters to defeat the legends contained within.

Conquer the Legends Within 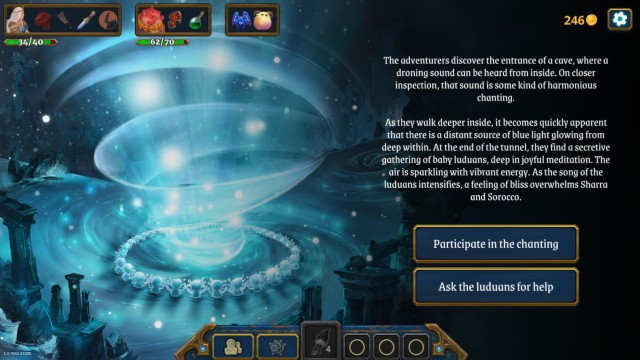 I found the premise wonderfully original, and something that helps Roguebook stand apart from its predecessors. Even better, the game plays out literally on the page of the book your heroes are trapped in. You initially begin with two heroes, though as you progress through the game, you’ll gain access to two more. At the beginning of each run, you can choose which two heroes to take on that particular journey. Since each hero has their own strengths and weaknesses, as well as their own unique deck to pull from, each combination is unique and requires a different strategy to be successful. For example, your starting heroes are Sharra and Sorocco. Sharra has some pretty powerful attack cards, but her HP is on the low side. Sorocco, meanwhile, has high HP and plenty of skills that help block enemy attacks.

I should take a quick moment to also mention that each hero starts off with a special piece of equipment that is specific to them. Going back to the starting heroes, Sharra has an item that gives her three Power (basically extra attack points) when she’s in the lead, while Sorocco’s item gives an extra two points of block at the end of the turn if he’s in the lead. This is an important aspect of the game to remember during combat, because whoever is in the lead is going to be the one attacked first. It’s possible for your heroes to switch back and forth between being the lead and being behind the lead. Cards will tell you if it will swap a given her to the lead position when played. 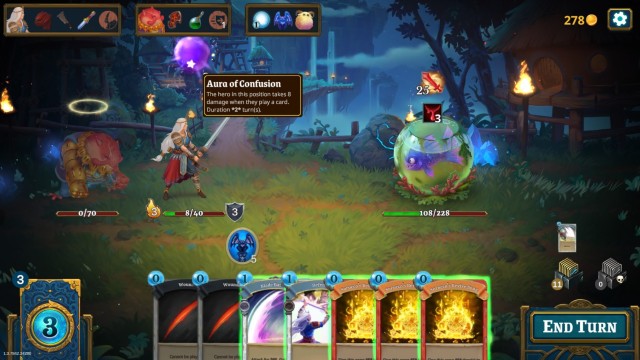 Combat, of course, is a pretty big focus of Roguebook. You’ll begin each turn with a set number of energy points you can use to play your cards. Each card has the cost shown in the upper left. Pretty standard stuff in that regard. Thankfully, this game isn’t happy to leave it that simple. There are a variety of buffs, debuffs, and status ailments you can inflict upon your enemies – and that they can inflict upon you. Some of the innate buffs enemies have can be incredibly tricky to overcome. For example, there’s a demented-looking fish in a fishbowl that can inflict Aura of Confusion, which in the case of the screenshot above, causes 8 damage anytime your lead hero plays a card. You’ll have to play your cards wisely in order to mitigate the amount of indirect damage taken before the enemy even begins their turn. Another unique mechanic is the ally cards you can find. When used, they’ll summon an ally with a unique skill to aid you for that battle – some will provide buffs for your heroes, while others will cause damage at the end of each turn. There are a nice variety of these allies, and I found them to be a welcome addition.

Of course, to be successful in combat, you’ll need to carefully build your deck as you make your way through the pages of Roguebook. As you explore, you’ll come across what are essentially chests. For 25 gold, you can select from three randomly generated cards to add to your deck. Or, if none of the cards look useful for whatever strategy you’re pursuing, you can choose to simply lose the money and not take any of the cards. Another twist that helps set Roguebook apart from its counterparts (and the inevitable comparison to Slay the Spire) is that you’re not necessarily punished for building your deck too large. In fact, you’re rewarded, as you’ll be able to select from a skill tree for each character or the party as a whole as you collect more cards on a run, which can give you a valuable edge in battle.

Explore the Pages of the Roguebook 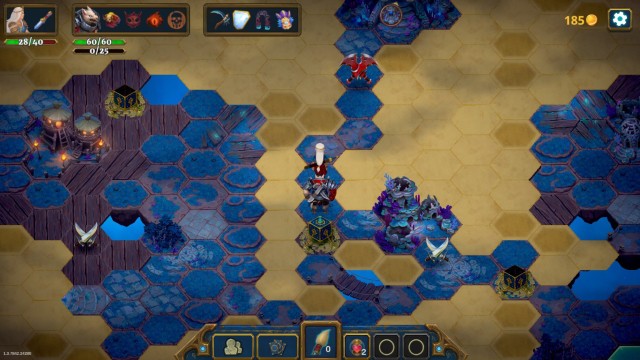 Roguebook’s exploration is unique among the deck-builders that I’ve played. As I mentioned earlier, your heroes are trapped in the pages of a book full of ancient legends. While the path from the beginning of each chapter to the boss is filled in for you, you won’t get very far if you don’t explore beyond that narrow track. In order to explore more of each chapter, you’ll need to literally fill in the pages of the book with paint. You can do this with items you gain from defeating enemies or that are just laid out on the page. Some allow you to fill in just one space, while others will do several in a line, and others still will fill in spaces in a line in front of and behind you. The most useful means to fill in the pages, though, is the paintbrush, as it will fill in every space in a radius around you, and that radius can be temporarily increased by spoils earned in battle. Exploration is crucial to obtain additional cards, gems (which can be crafted onto cards in your deck to add special effects like increased attack and block), and equipment you can attach to a hero for additional abilities. Paint is, of course, limited, so you’ll need to explore carefully while trying to be as thorough as possible. 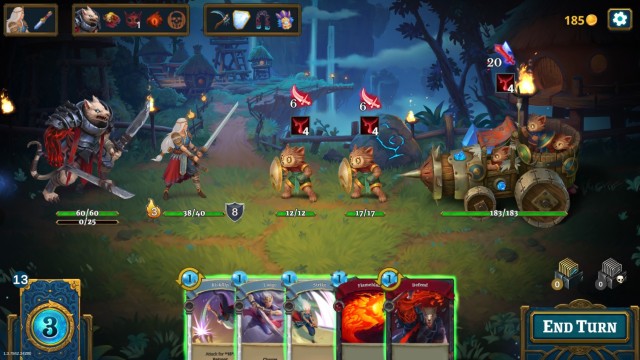 As I’m sure you’ve noticed, this game is absolutely gorgeous. Seriously, the production values are just top-notch. Everything has a stunning hand-drawn quality to them. The backgrounds of each battle are lush and vibrant, and the enemies themselves are beautifully rendered. And so unique! I mean, look at those critters above. They look like puppies in some kind of crazy deathmobile, and I’m way into it. All the enemies look and feel wonderfully unique, and it’s a real treat getting to watch the paint splash across the pages of the book, new spaces springing up right in front of your eyes. The music is solid as well. You might not find yourself humming along, but it fits perfectly with the game.

Honestly, I have very little criticism for Roguebook. You can feel the inspiration from earlier deck-builders, but it’s very much its own thing. Unique combat mechanics, gorgeous visuals, and addicting exploration make for a roguelike deck-builder that’s polished and keeps you going back for more. And you’ll definitely want to go back for more and more, as you’ll unlock additional cards and skills that will help your future runs. I’d also like to note that the developers received some pretty heavy criticism for making what seemed like a fairly significant chunk of game into DLC that was available the same day as release. In what I thought was an integrity move, they announced that they’ll be releasing the Apex Predator Pack for free, and anybody who purchased it can request a refund. Just something to keep in mind if you’re seeing this particular criticism of the game.